I have to say that we're pretty spoiled here in our post-cruising life.  We have good friends, a nice beach, and lots of free time to enjoy both. Then suddenly... CLOVID-19 happened.


Each Beachwalk is unique...
We may walk this beach a thousand times...
But no two will be the same!

Immediately prior to all of this becoming an ever-changing merry-go-round, we had a week of non-stop fun with a guest.  It seemed like no sooner had we dropped her off at the airport, the entire planet began to lose its mind!

Bruce and I settled back into our normal life, happy to rest for a while!  We would take the remainder of the week off to relax, and then begin our week on Monday with a trip to drop friends off at the airport.  That's pretty much all that's on our calendar until the end of April.

The only reason we had to get out was for some exercise, maybe try out that new fishing pole Bruce bought the other day... The sun was shining, winds were down, and we felt very safe and responsible here on our beach!

I think this was the day that the Lockdown was decided...

We got up early on Monday, and took our friends to the airport.  The new rules were in effect today, but we were sure that we would be fine doing this, and making a run to Costco on our way home.  Essential services were the only businesses allowed to be open, and people were allowed to be out when using them, as long as everyone was home on lockdown between 9pm and 5am.  Business were all to close at 6pm daily.

It was almost like a "snow day"! Like all normal demands on our time were halted.  It was a procrastinator's dream!  EVERYTHING that could be put off until tomorrow, was now to be put off for TWO WEEKS!

I think that most people were willing to give it a go.  Take a break from life, relax, catch up on some solitary pursuits, maybe for the first time in our lives, sitting in front of the TV in our skivvies was the "noble" thing to do!  We've got this America!! 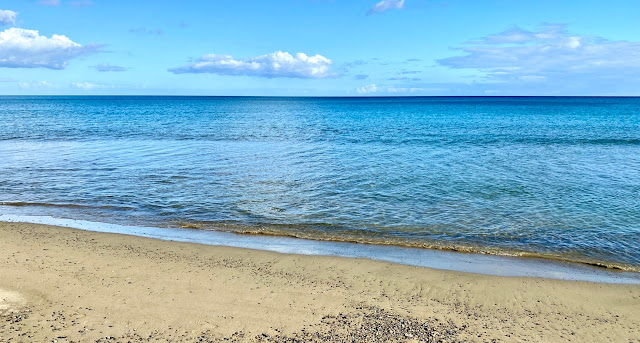 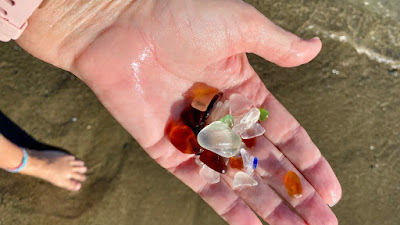 When we got home on Monday, we still had time to take another walk on the beach, and I had a new Fitbit to take out for a spin!

It was eerily quiet out there... as if even Mother Nature was under lockdown! We had never seen the Bay so calm and flat.  And the beach combing?  So. Many. Pieces of Sea glass! 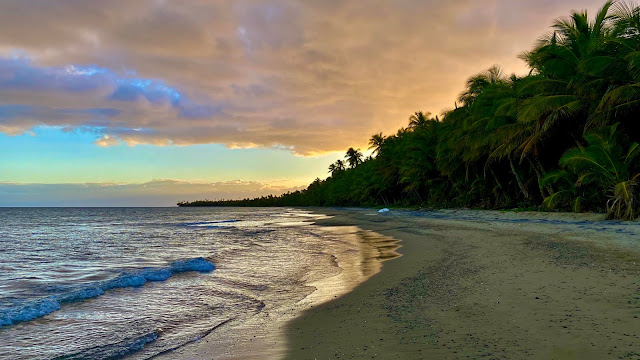 On our way back in, we paused by a neighbor's gate for a short - six foot away - chat.  She dropped the bombshell into the conversation so smoothly, I almost missed it.


People found on the beaches in San Juan, and other areas, were being issued citations that carried fines of up to $5,000.00!!

Never in my wildest dreams had I considered that OUR beach would be off limits.  For a while, I wrestled with myself in my head.  Nobody is patrolling out there.  I'm sure the rules are for those more popular beaches, the ones so crowded that people are tripping over one another. Our beach is "private".... I'm sure it's OK.  But in the end, the "goodie two-shoes" in me won out, and we reluctantly gave up our beach walks.

That seems so long ago now as I look back at that last hurrah.  But, we've been trying to make the best of this and remain positive.  I had my doubts in the beginning, but I know it's the right thing to do.  Especially since Bruce is in the "at risk" category because of his age. 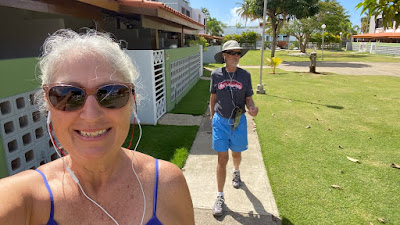 We began looking for new ways to get exercise.  We found workouts on YouTube that we enjoy (well, sort of) doing.  We began walking around our courtyard.  That's still OK, because we can keep a distance, and it IS private property... So far the rules have not banned us from walking outside, just not in public places.  I've been able to keep my voracious new FitBit Master at least partially sated!

So far, we've managed to keep our diet in check and haven't sunk to wallowing in carbs and junk food!  But we did run out of fresh veggies and had to go out into the world for more.  That was interesting.  There weren't many people on the roads, but still some.  When we got to the nearest grocery store, we found a LONG line of people waiting outside ~ at safe distances from one another, of course.  We decided it wasn't worth waiting, and we would check another store.  Second one, still a long line, in the sun! Nope! 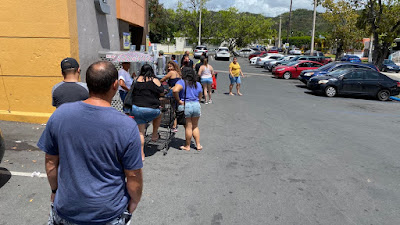 We would just go home and come back out in the morning... But then I got worried that the store hours would be abbreviated.  What if we went out and everything was still closed. There is one more grocery nearby, we would just pop over there to the one in Patillas.  Well, we did find a line, but it was worth it.  While waiting in line, a woman came out and pointed to the MUCH shorter line for the elderly.  Another punch on Bruce's Old Guy Card! 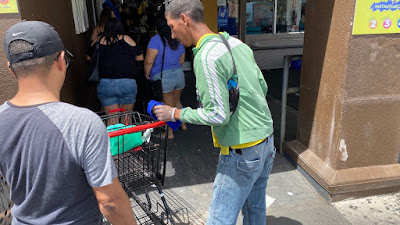 Overall, we were happy to see that our little towns were taking this seriously.  There was even a guy outside in charge of managing the shopping carts.  We weren't allowed to touch one until he wiped it down with disinfectant! 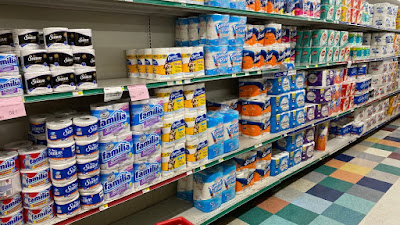 We moved to the head of the line and waited briefly.  People were coming out, but they weren't letting others in very fast.  Then we got called up as they let in 5 at a time.  Happily, there were few people inside the store shopping, so it was easy to keep a distance from one another.  There was plenty of stock, fresh veggies galore, and even toilet paper!  I was proud of our little town for not taking part in the hysteria that seems to be ravaging the rest of the country! 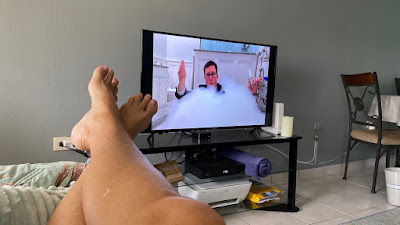 Back at home again, with our refrigerator now well stocked with healthy foods, we settled in to see how the rest of the world was faring. Sporting events are being postponed and cancelled. Schools are closing, with some even closing the school year down early. Employers are being urged to allow their workers to stay home, or work from home. Fuel prices are down, and the stock market is tanking... Best not to look too closely at that.  Even the Late Night Comedy shows are now taping without an audience!

What kind of world are we living in ??? It seems almost unrecognizable.  But you know what?  Now that the idiots who have flaunted the restrictions have begun to be corralled, we're seeing people everywhere beginning to adapt.  The internet is being used for group meetings to take the place of all kinds of things, from work groups, to church services.  Imagine what would happen if we could actually learn something from this.  If not ALL  things were to return to normal when this is over... whenever that might be.  Maybe some good could actually come of this!

Now, dear reader, don't get me wrong.  I'm sad that people are dying, but I can't focus only on the bad... I've got to find some good in everything as I sit here flipping through photos of so many fun things we've done in the past weeks before this.  So many "lasts"... But I'm going to turn my thoughts toward the last day we're on lockdown, and then to the many "firsts' yet to come!  Stay safe out there!