I have to tell you that if you're planning to visit our neighboring islands of Culebra or Vieques during a visit to Puerto Rico, you should try to think ahead and get your tickets online.  It's easy to buy them at the Porferry website, but also be aware that once you click, it's done.  No refunds, no matter what.  There is also a pretty hefty convenience fee, per ticket, that comes with the privilege, but if you have to get there... it's worth it.  It's also ridiculously inexpensive to take the ferry service anyway, even with the fee!

When you get to the ferry dock, you'll also be given priority boarding with the online tickets.  Another perk!  Now, with all of that being said... we didn't know that our guest wanted to go to Culebra until the day before we went!  By that time, all of the early tickets were sold, as were the daylight return trips.  So we ended up taking the 11am ferry over, and then returning on the 9pm service.  Yes.  We were out gallivanting on the seas and roads until after midnight!  Thanks to June for driving.  And that's another story that I'll save until the end! 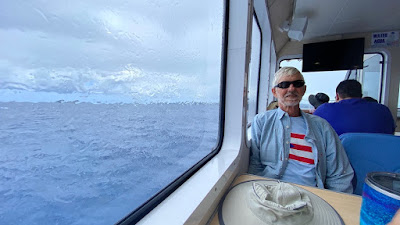 So, after a leisurely morning, June drove us to Ceiba and dropped us off to get the tickets while she parked the car.  Turns out, that was also fortuitous, because immediately after we bought our three tickets for the 11am ferry, it was sold out!  Guess this is what happens when you try to go to Culebra on a Friday!!!

There's been a lot of drama with the ferry service lately, but other than the 9:30 ferry leaving VERY late, our trip was uneventful.  We got great seats inside, at a table by the window.  I was still concerned about the passing squalls out there, but it looked like the black clouds were going to pass to the south of us.  Still, the waves were rather "Sporty".  That's a term us sailor-folk use for sucky conditions! Certainly not bad enough to halt ferry traffic, but uncomfortable enough to leave the majority of the passengers with faces buried in the barf bags by the end of the trip!  The stewards were running from one person to another, handing out fistfuls of cotton balls soaked in something... I assumed alcohol, but I could be wrong.  Supposedly it was to help with the smell if you held the cotton to your nose.  I simply refused to acknowledge that any of this was happening, and that worked ok for me.

As soon as the boat docked, all of that nonsense disappeared, and everyone hustled to the door like so many cattle!  If cattle liked beaches, that is.  In one fluid motion, we left the ferry and were ushered onto one of many waiting shuttle vans that would take us, and all of our gear, straight to our desired destination... Flamenco Beach! 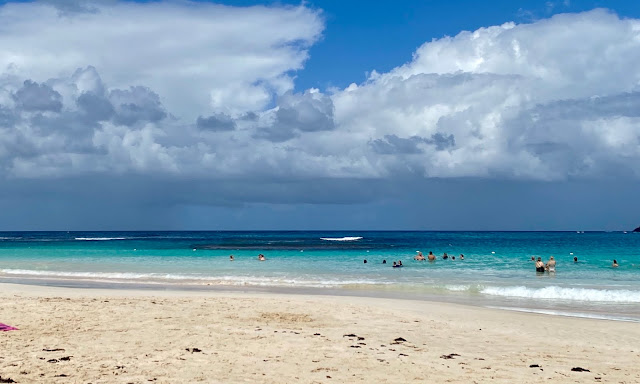 This beach is on so many lists of "Top XX Beaches".  And the reputation is well worth it.  My worries that conditions would be too rough to be enjoyed were for naught.  There was a red flag flying, indicating that the surf was rough, but it wasn't nearly as bad as the time I came here and got pummeled, causing me to lose my sunglasses, which were never seen again!  Today would be a piece of cake!

There's not much to say about sitting in a chair beneath an umbrella, other than, if you haven't tried it... you should!  The breeze was variable, causing our umbrella to require extra assistance if we didn't want to chase it down the beach.  But we figured out how to anchor it with one of the chairs, as long as someone had their butt planted in that chair at all times.  No problem with three people! 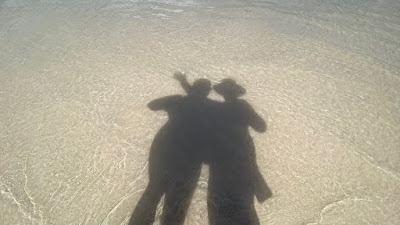 June went out into the water for a while as Bruce and I got settled.  Then I went out to join her, and we both came back to give Bruce his turn.  He wasn't quite ready yet, so we had a little lunch break, then  June and I took a stroll up the beach to see how the old M4 Sherman tanks are doing.  The two tanks on this beach were left behind in about 1975, when the US Navy departed the area, after using it for bombing practice for many years.  Now they're just a tourist curiosity, made more interesting by the colorful graffiti that covers the rust! Yes, they're still there!

The sand comes and goes, but today there was plenty around the tank so there was no wading to get to it.  Easy for photo ops! 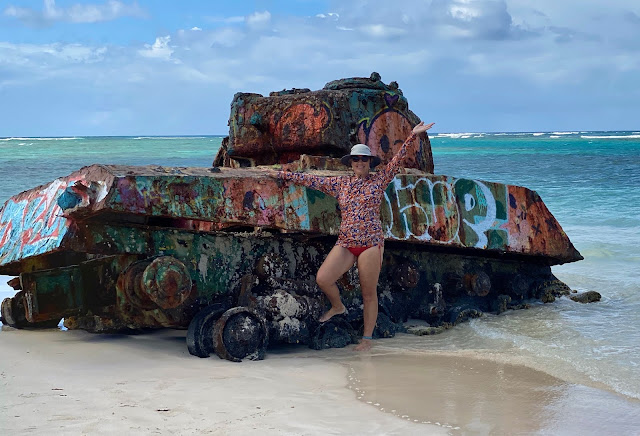 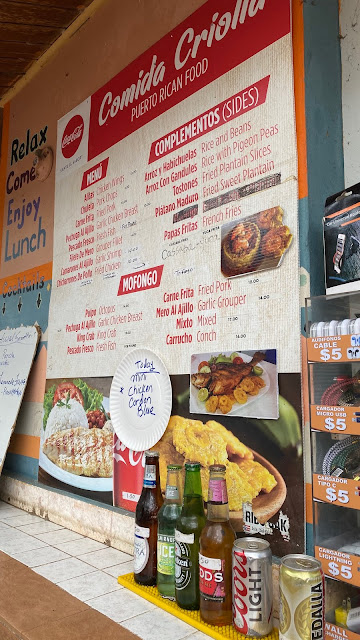 The water here is a million shades of green and blue.  The sand is a delicate coral pink/white that stretches as far as you can see.  The waves today were a little boisterous further down the beach, but the area we were in is somewhat protected by the reef just outside the swimming area.  After a nice lunch of local Puerto Rican favorites, and maybe more than one trip to the bar...  June and I deserted Bruce once again for another refreshing dip in the crystal waves! 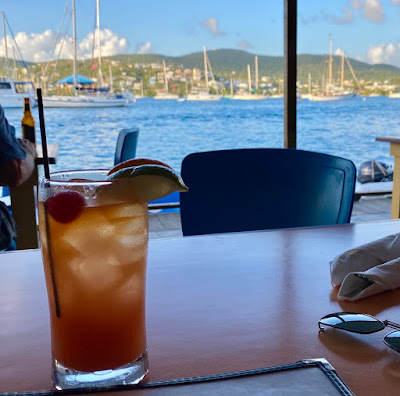 After relaxing at the beach for the afternoon, we decided that we would take a chance that maybe we could talk our way onto the 5pm ferry.  If not, maybe we could leave our beach gear at the terminal while we spent our remaining hours at the Dinghy Dock.  That would be a "no" and a "no".... So, just before the restaurant officially opened for the dinner crowd, we lugged all of our sandy gear over to a table at one of our favorite spots on the island, the aforementioned Dinghy Dock.

The time passed quickly as we sipped our beverages and waited for the kitchen to produce some appetizers for us.  I had mentioned to June that sometimes the employees of the restaurant would feed the tarpon and Frigatebirds, but no promises.  With no fanfare whatsoever, a guy walked over to the dock and began rousting up the tarpon!  We rushed over to see the ruckus, just in time to see the first huge bird come in for a snack!

What an amazing thing to see!  The fish roiling in the water below, while the carousel of enormous, prehistoric-looking bird beasts circle and dive for the chicken scraps.  They will sometimes even come take food from the hand!  What LUCK! 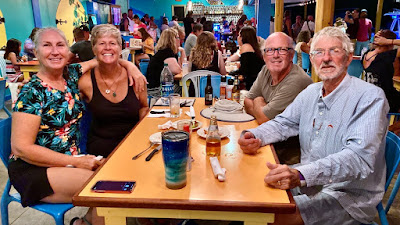 After that all died down, we settled once again, and I was having a conversation via message with a Cruiser friend that is anchored here in Bahia Hondo.  I was hoping that with zero notice, she and her husband could be lured to shore for a visit.  But it was not to be.  At the precise moment that our conversation ended, I heard someone speak my name.

I looked up to see Cruiser friends we haven't seen since Grenada, approaching our table with arms out for a big hug!  Wow!  What luck!  Cori and Dale had been finishing their dinner at another local hangout, when she saw my post.  They paid their tab and hustled right over!  How awesome is that!?? Cruiser friends are friends for ever, and we never miss an opportunity to catch up if it is offered. Thanks Hi-Flight for changing your plans and making this happen!  It really warmed my heart to know that we're still part of the Cruiser crowd!

Suddenly, it was time to pay our tab and get back over to the ferry landing for the ride home.  We didn't have to wait in line due to Bruce's "Old Guy" perks.  Nope, we got to go inside and sit while we waited!  We were all so very tired after a day in the sun, being able to sit was a miracle!

The ride back to the big island was completely uneventful, unless you can consider being frozen out as an event.  I think the crew are making us suffer for causing them to have to work so late into the night! They had the AC cranked down.  Throughout the cabin, people were digging in their bags to produce something... anything that could be worn against the cold!  Sheesh!

Finally it was over, and we were ushered out into the night on the other end.  June took the shuttle to fetch the car, while Bruce and I waited.  I'm so thankful that she was willing to do the driving.  And after our trip home, I was more than a little ashamed at what I put our guest through!

The roads are dark and winding, and littered with bumps and potholes.  That alone would cause problems... But many drivers use their high beam headlights exclusively.  I assume that it helps them to see the holes and bumps... but it doesn't help the poor people oncoming who are completely blinded, over and over again!  Poor June was frazzled!

Add to that, we came up on the rear of a car that was weaving dangerously into the opposite lane and the shoulder.  He weaved so badly that we couldn't even consider going around him... so we were forced to ride behind him at a safe distance... staring at his crazy antics.  We just knew that we would be first on the scene of a terrible crash as time after time, the car went fully into the opposite lane, on an uphill climb or a blind curve.  Several times, the oncoming vehicles narrowly missed our drunken leader.  We didn't know what to do, other than to stare, transfixed at his squirrelly tail lights!

We followed him at about 15 miles per hour for miles.  Eventually we came to a road that bypasses one of the little coastal towns via a tunnel beneath the mountains.  I told her that whichever way that guy goes, we should go the other.  Tunnel it was!  Thankfully we were able to get ahead of the guy, so we never saw him again.  Hopefully he made it to his destination alive.  We were never more thankful to get home! THIS is why I don't like to drive at night!  Thank you again June for taking it on!

What was supposed to be an easy day, ended up being a long, day followed by a hair raising experience...  Tomorrow, maybe we'll take a nice drive in the mountains to relax...