The Big Blob That Is "Nine" 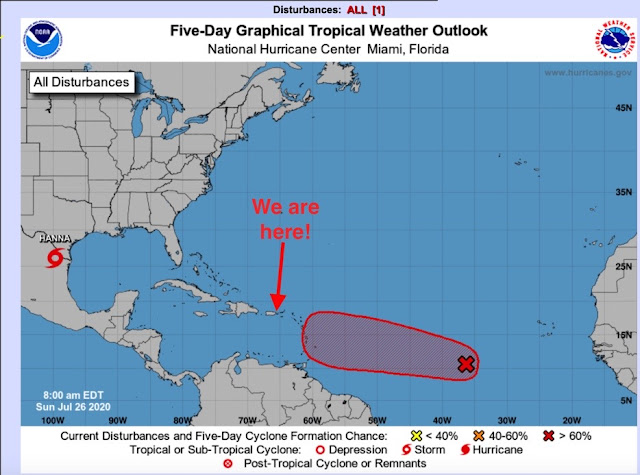 I don't get how they're calling these storms by other names these days.  First it's Invest something... and now this year, they've come up with a new twist.  This one is now called "Nine".  That's it.  Just 9.

Storm 9 is unusual because it is still very early in the season.  It began to form off the coast of Africa at the end of July, which IS officially part of hurricane season, but we don't see much action until later in the summer.

So this is how our second hurricane season as Puerto Rican residents begins.  We stay glued to the TV and internet, waiting for each scrap of information that comes out so that we can know how much to worry! And then we go out to the beach to see what is going on out there, until we can't.

When this storm first began being reported, it looked as if it would be a direct hit on us.  Thankfully, it changed its trajectory enough to pass south of our island, leaving us on the "dirty" side, but we need the rain to fill our reservoirs so that recent water rationing could cease.  Silver lining!

Now never let it be said that I would wish a storm upon us, or anyone for that matter, but I do get a little bit of thrill from stormy weather, and with the pandemic quarantine in force, it gives us something else to think about! For a couple of days, we could focus on THIS, instead of THAT!  I know! TWISTED!!

Our first look at the beach was kind of like normal, only more cloudy.  On Radar, we could see that the first storm bands were just about reaching Puerto Rico, but we weren't forecast to get much until after 2pm.  But, with nothing much else to do, storm watch was our entertainment for the day.  I have to say that with each passing report, we were increasingly relieved that this would not be a bad storm for us.

After the rain began mid morning, we decided to forego the beach walk, and opted to just peer out at our courtyard from the safety of our patio.  The winds were picking up as we could see the tall palms were beginning to look more tortured.  Inside our courtyard, normally completely protected from the wind, we were seeing some stronger gusts from the NNW.  This is not our usual wind direction, so it was definitely the storm bands swirling around us. The rains never got very heavy, and were intermittent as the bands brushed us.

So far so good.  We actually kind of got bored with this for a while.  The winds we were promised in the afternoon were really not much more than a normal windy day, but they alternated with periods of breathless calm.  The low rumble of thunder lured us back out to the beach again in the afternoon between rainy patches.

Well, this is surely anti-climactic!  But THAT'S OK!  Beats the alternative!  We have ordered new storm shutters.  Began the process back in January... but with the wait for approval from our HOA to do the roll-down type, and then the slowdown of everything due to the COVID19 pandemic, here we are, beginning storm season with no useable shutters!  At this point, we were told we could expect installation at the end of July... NOW... but it is all backed up.  So we wait.

We spent our evening as we normally do during the pandemic... watching mindless television and flipping through Facebook, with the odd weather check just for good measure.  We could hear the rain falling outside, just a little harder now, but still intermittent.  We went to bed and slept soundly, hearing nothing until morning.

When we woke up, we could hear the rain pattering against our bedroom window. Our condos are built of concrete and they are super solid!  We could hear absolutely no wind, and the only reason we heard the rain was because it was actually hitting our windows.  Outside, the trees were a little more tortured with gusty winds, perhaps a bit more strong than yesterday.

Island dwellers are used to having the power disrupted every time it rains, so seeing our microwave and stove clocks blinking when Bruce went down to make coffee was no surprise. What was a surprise was that we actually DID have power!  Thankful for that, we were willing to accept that the cable and internet was gone.  But quick, make that coffee before the power goes out for good! 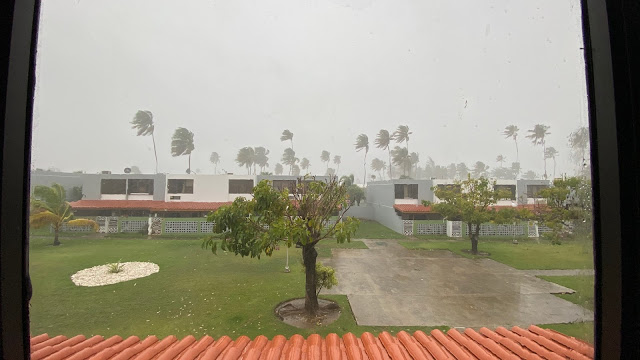 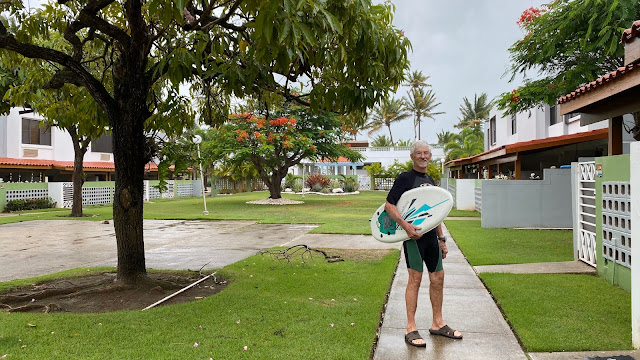 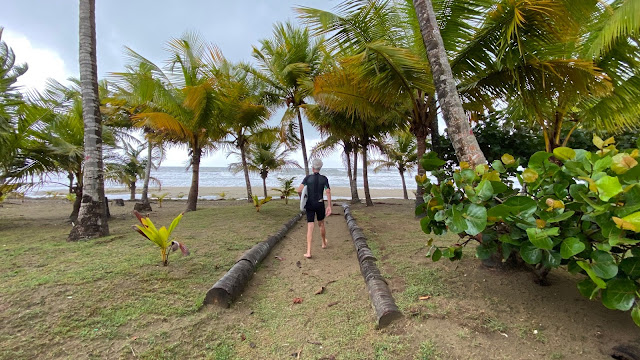 After the wind and rain died down (and after we had our coffee...) we scrambled to take advantage of a lull.  Bruce wiggled into an old shortie wet suit, while I opted to dust off the musty, dusty semi-waterproof coat I used to wear back in the days before we left Corpus Christi to go cruising.  Of course there was a discussion about whether or not Bruce would actually be using that boogie board, and the consensus was that it was only for a photo op... 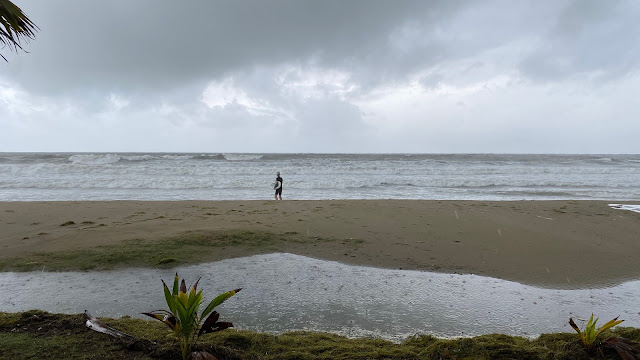 By the time we got out to the beach, the rain was already beginning to fall again.  Maybe it had never really stopped, but whatever, we could wait no longer!  What we found was similar to last year's storm watch.  There was a new layer of sand washed up during the night, but still a trough between our palm forest and the water's edge that forms a moat.  From time to time, an especially rambunctious set of waves would wash over the hump and deposit another couple of inches of water into the moat!

This is what I have to deal with.  We talked about it.  He assured me that he had no intention of going into the water.  Sometimes I think he lies.

So this morning, our beach was a little more exciting than yesterday!  The waters in our Bay were churned up and driving waves far up onto our beach.  There was a high water mark of seaweed left by the high tide sometime in the night. The roar of the Caribbean Sea was loud, but still, the winds and rain were intermittent.

Well folks, this is as much excitement as there is going to be from Tropical Storm Isaias!  Sometime during the night, the storm took an odd little jog to the west, before continuing on to the northwest.  This adjustment kept the storm far enough offshore that we never got any high winds.

We did, however, get some destructive rainfall in some parts of the island.  Throughout the day, we continued to see reports of roads washed out, and neighborhoods with more than a foot of brown, soupy water inside their houses, and cars floating down small streams, now engorged by the heavy rains.

Our Puerto Rican people just can't get a break! But, they will persevere, like they've done so many times before.  And this strength makes us proud to live among them!

We spent the rest of the day watching the quiet rain, and reports from around the island. We are thankful that our home was mostly spared by this first storm threat of the 2020 season.  We hope that our storm shutters will be installed before our next threat!  Stay tuned!  We're just getting started!