Other People's Vacation Pics ~ Part 2 ~ Our Part Of PR 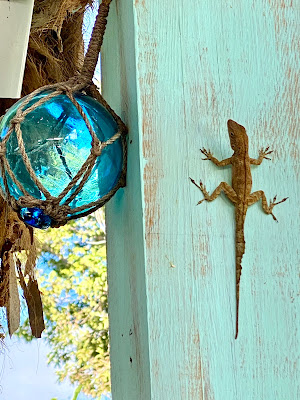 Little did we know when we laid our heads down to rest, that we would be awakened by the most bizarre sensation ever.  The sensation that our room was wobbling!  Yes, that's right!  EARTHQUAKE!!!

The room Bruce and I had was on the second floor of a wooden structure. There aren't many buildings constructed of wood in Puerto Rico.  I'm sure that when our whole world began to sway, both of us were thinking "Is this a good thing?".  Would the wood construction have enough flexibility to withstand this movement?  Or would the solid concrete be better. We don't know the answer to that, but at least nothing fell on our heads!!

Obviously, sleep was over once that happened.  We dressed quickly and went down to the pool area to source some much needed coffee!

So a little back-story here.  It's January.  Puerto Rico has been experiencing an alarming string of earthquakes since sometime in December.  I had purposely not mentioned this to my guests, so as not to send any alarms about the visit.  Selfishly, I didn't want them to cancel their plans.  Thankfully, they were totally fine with being awakened by the strongest yet, in a string of damaging quakes!  Trust in the "Vacation Safety Bubble" that has always protected me while on vacation! 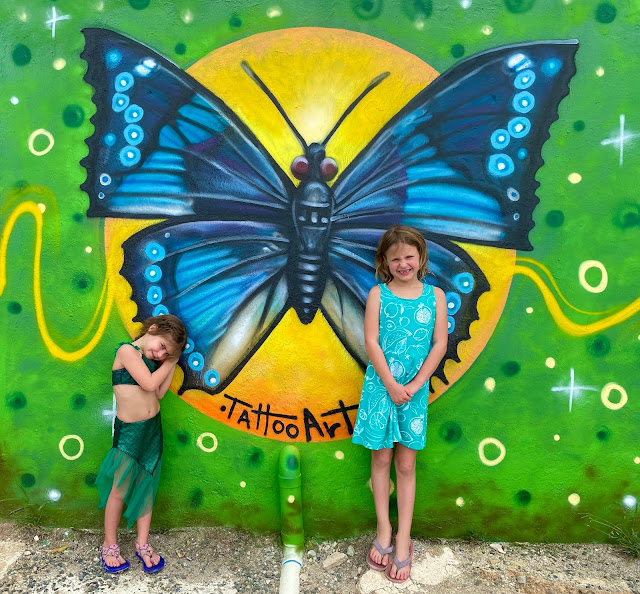 We all had our morning, and then packed up to make the drive to see some of the local attractions between here and our house. We made a couple of unexciting stops that were on my Google Map, then continued on to one of my favorites, the Yaucromatic murals of Yauco, PR. 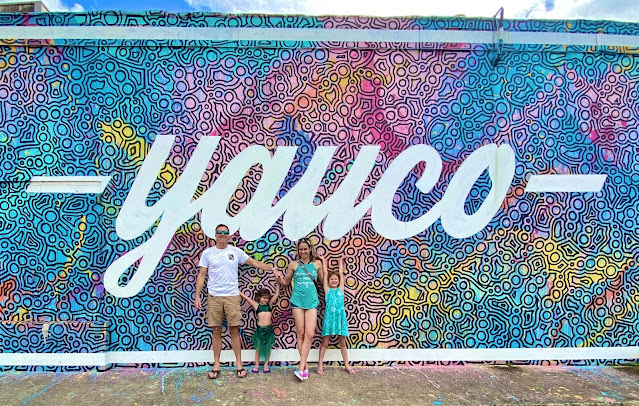 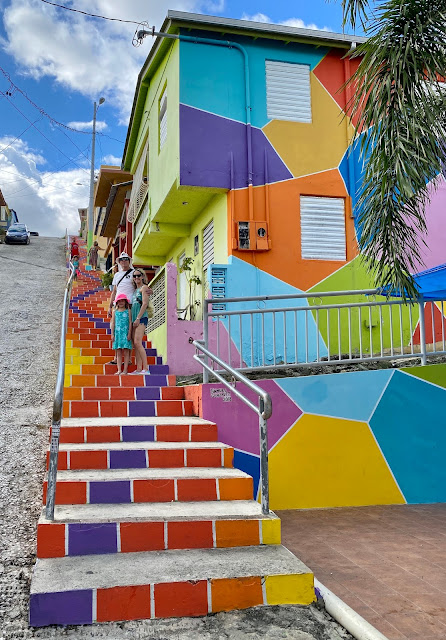 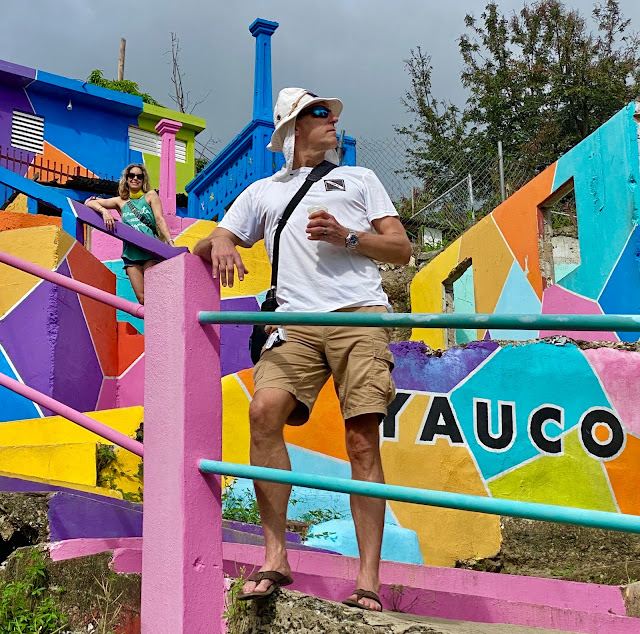 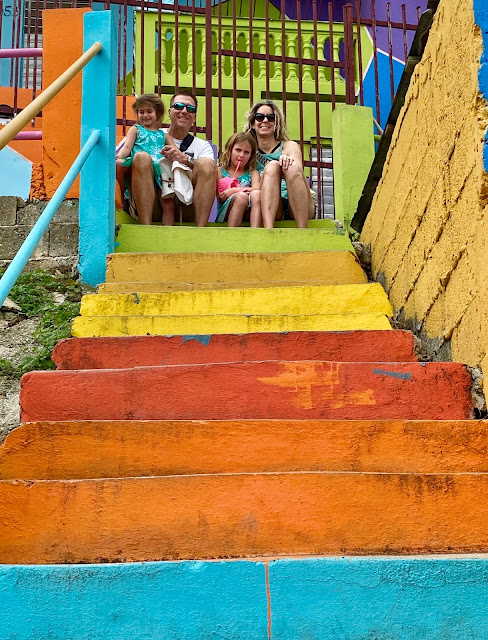 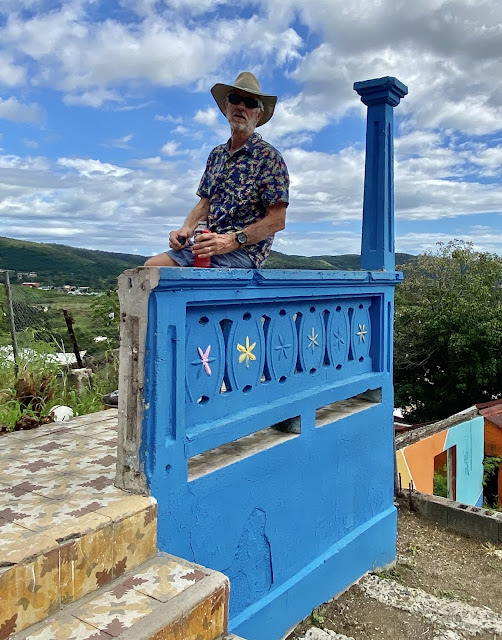 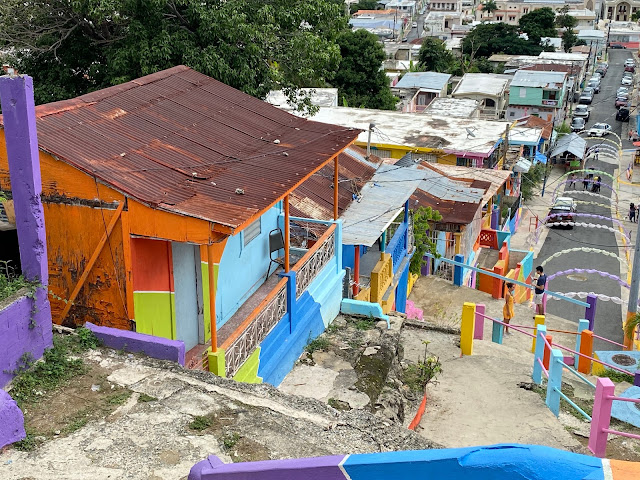 We all made the climb to the top for the view, had some Limbers, (small cups of a frozen concoction purchased from one of the painted houses) and continued on our way to our house. We got all settled in, showed everyone our new home, unpacked the suitcases and went to bed... Only to be awakened by another big earthquake!!!  This one was a 6.0 and could easily be felt all the way to Arroyo!!! This one knocked out the power grid Island wide!  That's no electricity.  That's no air conditioning. That's no lights. And we have guests!!  I've gotta say though, our guests took it all in stride.  Just part of the adventure.  Plus, at that point, we figured it would come back on in a few hours... so we went on with our plans for the day.

And what are those plans? I plan to convince my family that we live in the most amazing place on the planet!  First on the agenda was a "day at the beach" right outside our back door!

We took the umbrella and chairs, and Bruce and I watched as Mark and his family made some memories. 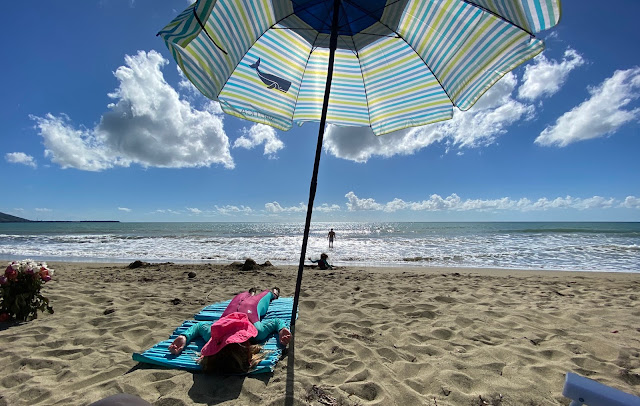 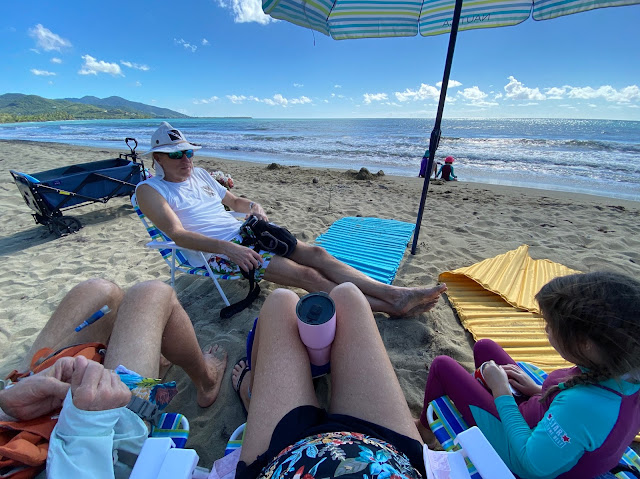 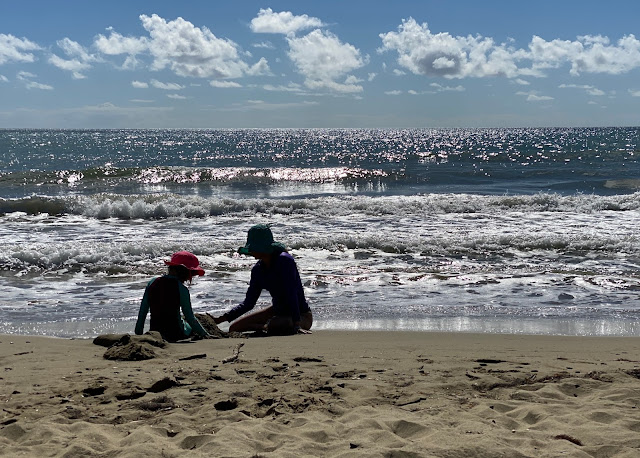 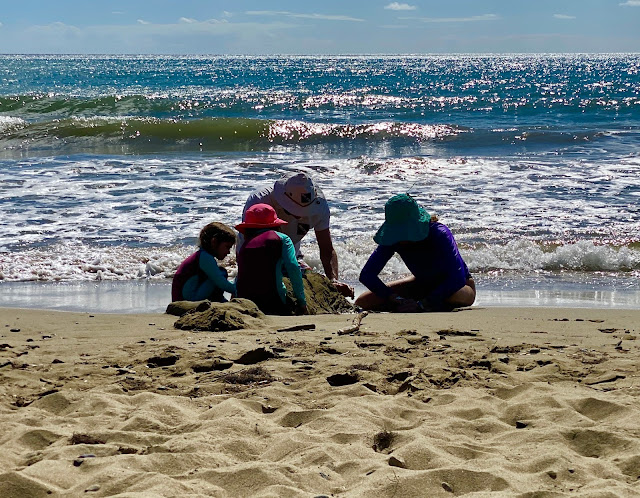 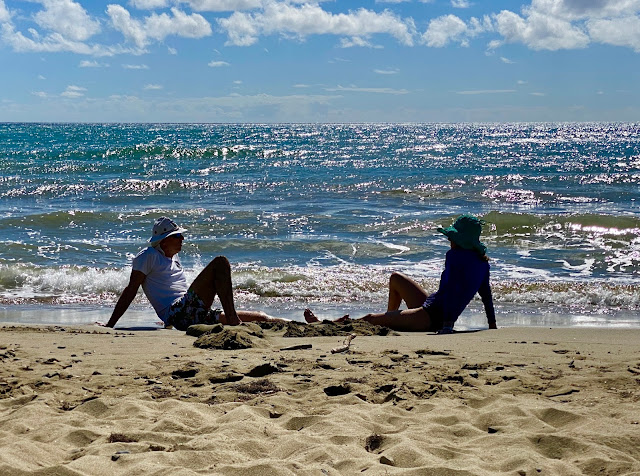 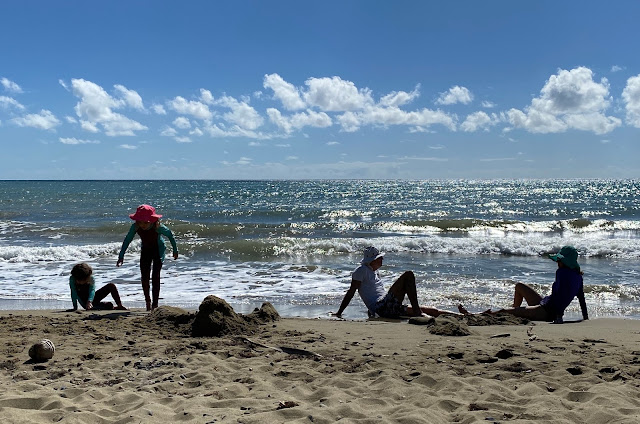 After spending a while at the beach, the kids got bored... so we moved on to the pool.  Our pool is just about as perfect as it can get.  We had the whole place to ourselves, and the waterfall was going, so we all relaxed and had some more fun in the sun! 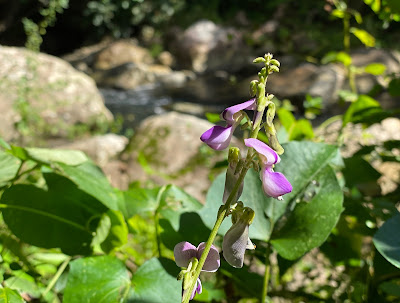 Wow!  What a fun day!  But wait... it's not over!  Within easy driving distance, we've got some more awesomeness to be had!  Just up the road from our house, well, up the mountain actually... is a little spot we found and love to share.  Survivor Falls!  Just getting down there is an event, the little road juts off the main road at an alarming decline, then there's a rickety old bridge to cross.  After so many earthquakes, I had more than second thoughts about driving across that bridge in a heavy vehicle...  Add to that, my brother being in the driver's seat, he took this opportunity to freak out his wife and sister by driving slowly, very slowly across the bridge... Mutiny ensued!

But we made it across.  Alive.  And lived to enjoy a bucolic family afternoon in the sunshine! We frolicked in the cold mountain stream, climbed on the rocks, and my brother even redeemed himself with a surprise picnic of guacamole-on-the-half-shell! 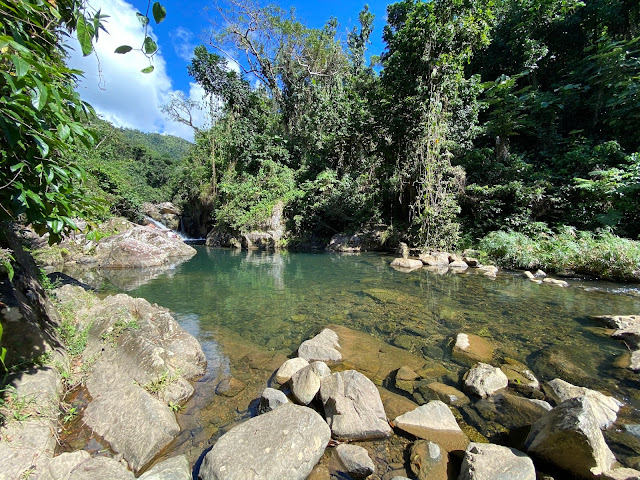 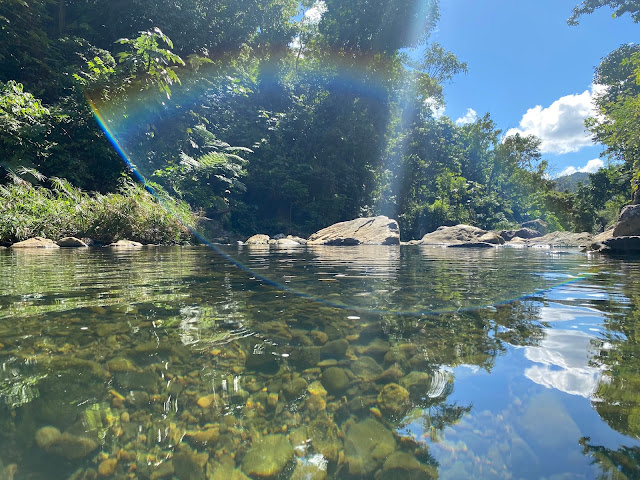 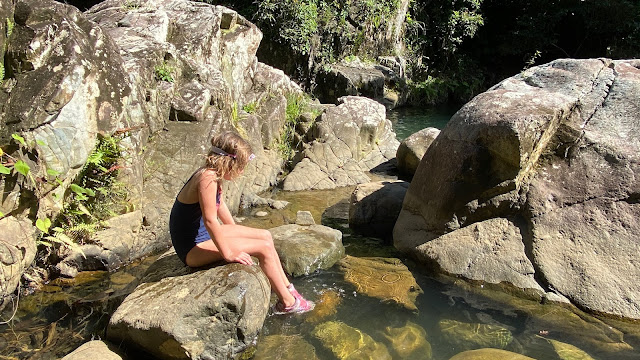 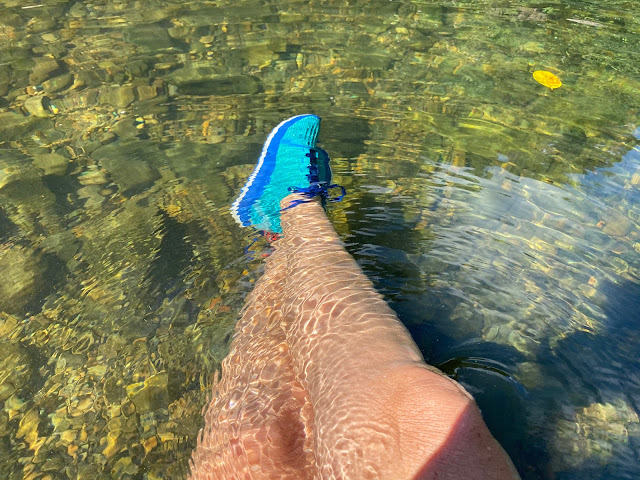 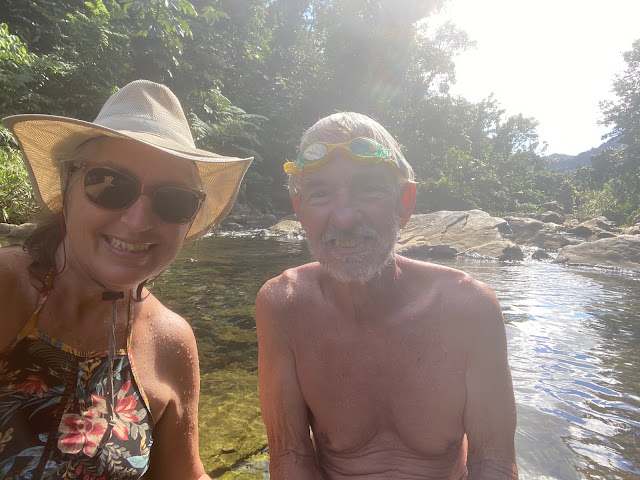 We swam around and explored for a while.  Then Mark and Laura left us to watch the kids, while they went off on an adventure.  They swam into the mouth of the falls, climbed up the rocks, and disappeared over the top!  I've never been up there, but I've heard that there is another pool and falls. 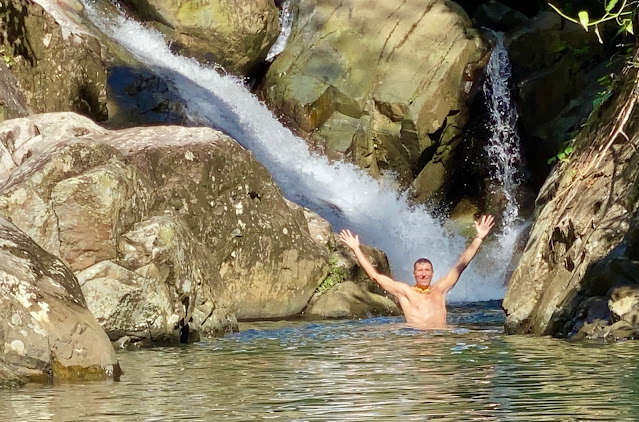 We watched until they reappeared, and one of the kids wondered what they were doing up there.  I teased them, saying "They're probably kissing!".  B said "Hmm, I doubt that..."  LOL, out of the mouths of babes!  But when they actually DID some kissing... I was vindicated!

We were all starving by this time, and my brother brings out his picnic bag, and proceeds to make guacamole right there in the river!  He mashed up the avocado in the shell, added some salt from Cabo Rojo, and some tomato.  He cut up some cheese and voila!  We have sustenance!  As irritating as he is sometimes, he does have his redeeming moments.  I think Laura has something to do with it!
We finished our snack and then packed up to go and visit yet another of our favorite places on the island.  I wanted to take my family to the Mineral Hot Springs in Coamo for an evening soak! We drove all the way to Coamo, only to find that the world had gone mad while we were frolicking in the mountain stream far from civilization.
There were no working traffic signals, many of the stores were closed.  Cars were scrambling everywhere. Chaos. When we arrived at the Springs, they were closed.  Evidently, the power has remained out, island wide since this morning's earthquake!!  With selfish disappointment, we turned away and skipped to the next item on the agenda.  PIZZA!  I had some Gustazos certificates for a pizza place in Santa Isabel!  Struck down again!  We arrived at the Pizza place and found it closed!!  Now starving, we drove around in search of food.  Eventually we settled for the only place still open... Burger King.  I KNOW!  ICK!!
We took our "food" to-go, and drove back to our house.  What the heck am I going to do with guests and no electricity.  And those guests are used to central air conditioning.  And while it is January somewhere, it is not January here in the Caribbean! We couldn't even blow up the kid's air mattress for them to sleep, so they had to sleep on the couches.  So, with the windows open to the sound of the waves on our beach, we slept.  And the miracle... nobody complained!  At this point, I was still certain that the power WOULD come back on before it became necessary to make coffee in the morning...