Long story short, we bought a new kayak!  And luckily for us, the winds laid down enough to make a beach expedition easy so we could take it out for a spin!  The waves were only about 1 ft or so, with a larger one or two rising higher, and then breaking in a tumbling crash.  All we had to do was to wait for those two breakers to rumble on by and then GO!  Our plan worked and very quickly, we were settled into the inflatable seats, paddling easily along the coast of our beach toward the east.

It's so wonderful out there in our bay, Bahia de Patillas.  The water is clean and clear when the winds are light, and we love gliding along on our little kayak.  It's a way to regain a little bit of the freedom we've had living on a boat these many years.

A line of clouds with dark blue bellies threatened rain, and we could see a couple of spots where the curtain was already falling.  This prompted us to hustle a bit so that we could be in through the river mouth  before possible squally winds could catch us.  As it turned out, the squalls stayed far offshore and we had an easy time getting to the mouth of the Rio Grande de Patillas after all.

We approached the mouth of the river just outside the wave line, looking for a deeper spot to paddle across.  We went all the way to the far bank, but didn't see any way that we could get across without getting out of the kayak and walking across.  No worries, this is very easy and we were across in a jiffy! 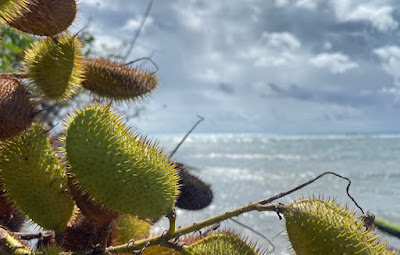 We beached the kayak on the eastern side of the river so that we could explore the small beach there.  It also gave us an opportunity to let the water we had collected on the way drain out!  This was a new place for us to explore, having only previously walked the western shores, but it's a small beach, so there wasn't much to see other than some interesting seed pods, and another crazy spider web, only this time in miniature!!! 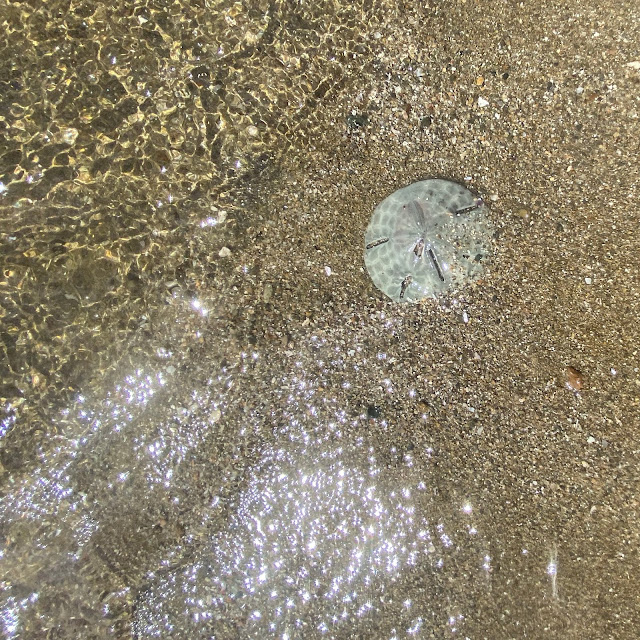 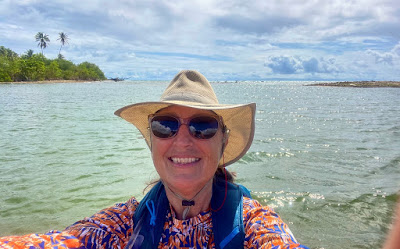 We loaded back into the kayak and set off to the far western tributary because it looked like the deepest water.  It was so calm and quiet as we slowly let the wind push us along, only paddling now and then to guide us in the right direction.  We could hear something scrambling in the trees lining the bank, and once I got a glimpse of a big iguana sunning himself up high in the branches.  He made a loud crash as he dove out of view, causing the branches to dip and sway.  We drifted past many unseen eyes as we floated up the river. 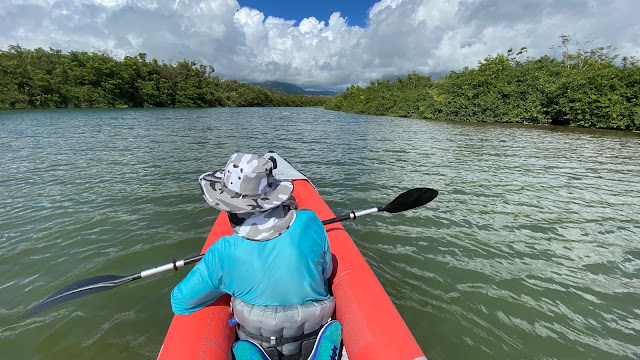 We explored the western tributary as far as we could go before we were blocked by a bunch of fallen trees.  Being lightweights, we were easily convinced to turn back and take the eastern branch that flows around a small island in the middle of the river.

The further we went, the more clear the water became.  What started out as being murky green, gradually turned more and more clear.  Bruce took a little taste and sure enough, the water was completely free of salt!  The river bottom was also increasingly rocky, with big boulders visible as we floated along the surface.  It became necessary for Bruce to  be on the lookout for rocks or branches that could either scratch our new kayak, or interfere with the fin mounted on the bottom for stability.

Eventually we felt the inevitable light scraping of the fin on the rocky bottom, and we realized that the free ride was over!  We would have to either turn back, or portage across the rocky shallows.  Well, this being a true adventure expedition, we got out and walked!  Bruce did the gentlemanly thing and forged ahead, while I hung onto the kayak as it floated over the rocks.  It was pretty easy, and when I occasionally slipped on a rock, the kayak steadied me.  The wind-against-current made the kayak seem light as air! 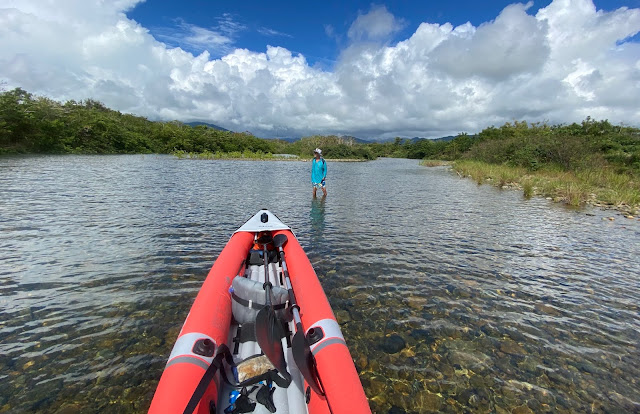 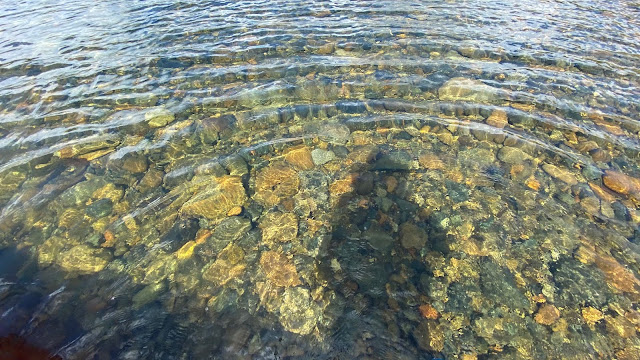 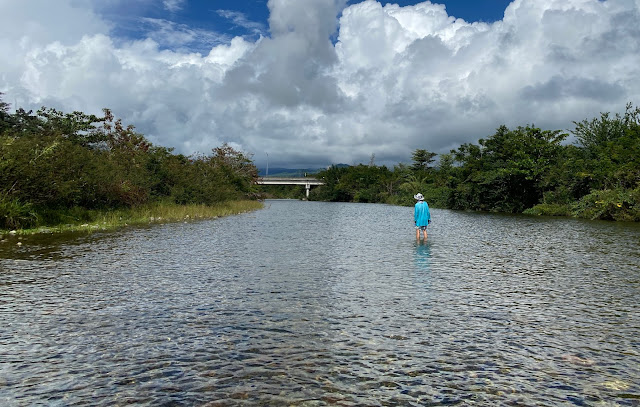 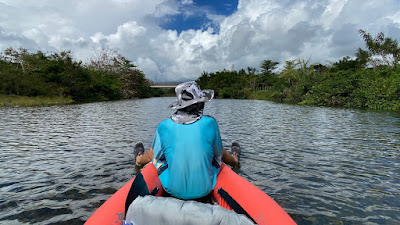 We intermittently paddled, and portaged the kayak all the way up the river past the causeway bridge that stretches across the river plain.

As soon as the water became deep enough again, we hopped aboard and paddled efficiently along with the wind at our backs.  Bruce on the lookout and me providing propulsion.  When the water shallowed again, we jumped off at the first complaint from our rudder and happily plodded along in the rocky river bed.  We had come well prepared with our camelback packs full of water, and our water hiking shoes!

We continued on past the causeway bridge and found the river running more rapidly across the rocks. There was still enough depth along the western  bank for us to keep paddling. We came upon a very long cable running from the shore to some fallen trees in the middle of the river.  As we approached, we decided the best way to get past it was to duck beneath.  Bruce boldly grabbed the cable at about the same instant that I realized what it was...

It was a fallen power line!!!  And in looking around, we saw that there were SEVERAL of them running across the river bottom.  Overhead were the new lines installed after hurricane Maria.  The old lines were simply dropped and left where they fell!

More than a little bit disconcerted, but happy that Bruce didn't die from grabbing the cable, we ducked beneath and continued upstream until we reached a rapids that came from a slightly elevated area of land.  We could easily have portaged across the short distance and continued on into the river proper, but we decided to call it a day.

On the return, we made much better time.  Even though the wind was now in our faces, the unseen river current made a huge difference in helping us glide along.  Our worries about having to work much harder to get back to the river mouth were unfounded!  Also easing the way, was the fact that we now knew where the deeper water was, so we were able to keep kayaking over areas we had walked on our way in.


Suddenly we were back at the river mouth again!  Wow that seemed fast!  We strategized about the best way to cross the bank, and decided to just portage along the western shore.  We paddled right up to the beach and got out.  Picking up the kayak, we realized that we needed to drain it again.  Just the process of paddling brings a fair amount of water in, but draining it is quick and easy!  That done, we picked up and plodded along the water's edge... until I saw a brilliant blue something in the rocks.

It was a piece of blue sea glass!  A good omen for sure!  Although why we needed one at this point was lost on me.  We had already had a fabulous day and it looked like the waves across the sand bar were not much bigger than when  we came through earlier.

We paused in our homeward trek so that I could look for more treasures... meanwhile, Bruce scouted up ahead to see where would be the best point to reenter the water.  Walking along in the quiet of nature is just heavenly.  It seems to bring out all my joy, lifting my soul as it all bubbles to the surface.  THIS is why we came to Puerto Rico.  The fact that we can have these adventures without having to go far is what keeps us getting out of bed in the morning.  For sure this is the best alternative to continuing to cruise on a sailboat... which was no longer a viable option.  SO.  HAPPY! 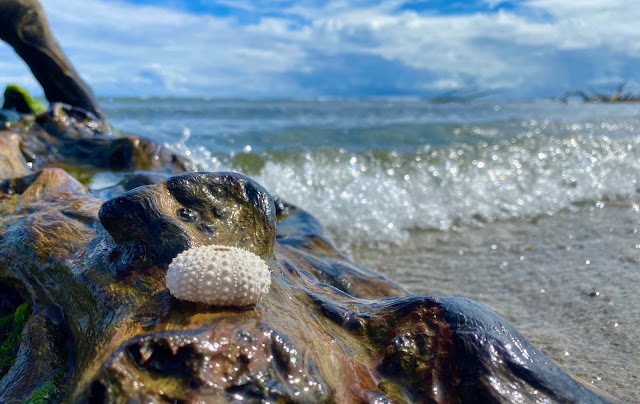 Bruce returned with the news that he had found us the perfect, calm place to plop back into the Bay, so we picked up the kayak and hiked the short distance back across the bank at the river mouth.  He was right, it was an easy spot with only tiny waves and a nice sandy bottom for us to wade out to get a water start so as not to damage the fin. 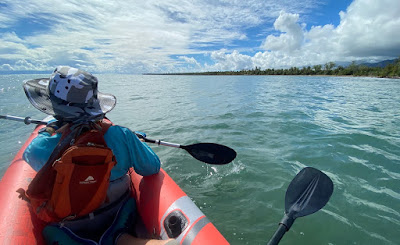 Just like that, we were paddling away from our river adventure, with the light breeze helping us along, rising and falling on the gentle the swell.  I always get a kick out of going over the swells, kind of like a carnival ride.  Our new kayak did a wonderful job and we felt very steady and secure. 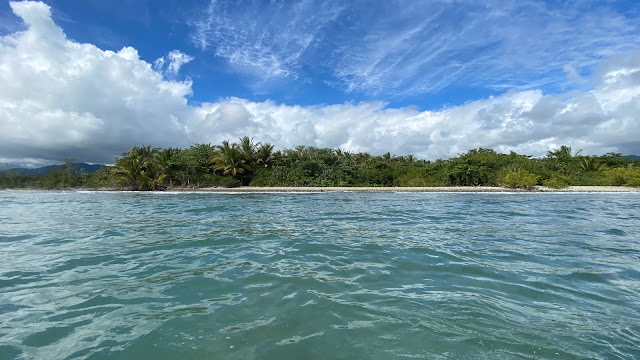 The trip back to our beach was so easy with the wind now behind us.  We always try to paddle upwind first, and it's convenient that it's the direction we wish to go anyway!  The sun was higher on the return trip and the water was clear and cool.  We are absolutely in paradise and are still marveling that this is our HOME!

We're also very happy with the little kayak we bought.  When Bruce found it and told me he wanted me to buy it, I had my doubts.  For the price - Less than $300 - I just couldn't believe that it wouldn't be some lightweight "toy".  But after using it for the maiden voyage, we are both so happy with the purchase, and see many happy excursions in our future!

As I said before, I'll now repeat.  THIS is why we came to Puerto Rico!