The Honeymoon Isn't Over

Back in 2016 when Bruce and I first visited Puerto Rico on our own boat, our love for the island was renewed!  Or original "meeting" was many years ago, on a 24 hour layover between the BVI and home.  La Isla Encanto worked her magic on us then, and she continued to do so throughout the many months we spent here that summer.  So much so, that we decided, as you know, to "Put a ring on it!" when we bought our home here!

We are determined to keep the honeymoon alive and not succumb to normalcy by becoming  complacent.  We are actively working to make sure that there is a balance between doing the things that are required in day-to-day living, PLUS scheduling fun stuff and furthering our exploration of the island.  That's why we chose this island after all... the fact that there are so many hidden treasures to be found here.  It could take us YEARS! 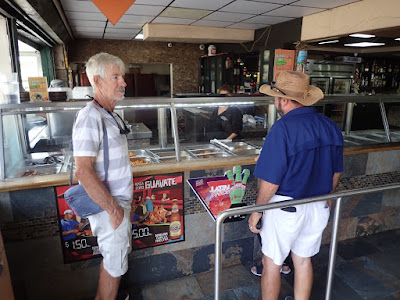 Today we invited new friends, Glenn and Ruth to go with us to one of the many Lechoneras in the little town of Guavate on highway 184.  The drive itself is an event as it takes us up and over the mountainous interior of the island and along winding, narrow roads.  The forest towers over us and the sweeping views are stunning.  In broad daylight, the green of the foliage takes our breath away.  We chatted and laughed all along the way and when we arrive, Glenn commented about how fast the drive went.  An hour spent with friends flies by, as did our lunch!  We only left when we heard the sliding doors slamming shut!  Time to go!


Zipping back along the way we had come, we noted several spots we would like to stop some day... But as we approached the roadside parking for Charco Azul and saw the cars... we made a split-second decision to stop and check it out!

I've had this place on my "want to go" list on Google Maps for weeks, but really never knew where the parking was.  Ruth and Glenn knew where it was, but had, like many locals, never visited before. Seems like they need a little spice in their island life as well, and they make the perfect companions for our explorations!

We had no preconceived ideas of what to expect here, but were pleasantly surprised by what we found.  While the damages wrought by hurricane Maria in 2017 were still very much in evidence, the place was cool and inviting.  There is a walkway made of asphalt and cement that is mostly intact, if somewhat uneven in spots.  You don't have to walk in mud, and even the one spot that looks to be more recently washed out by heavy rains, was gravelled so you don't get muddy.

We made our way down the hillside to the river and found a beautiful oasis of clear, clean, calm water.  The river was running slowly with only a few spots where the waters rushed over shallow rocks, but there was evidence of a recent flash flood where grasses and trees were bent over. 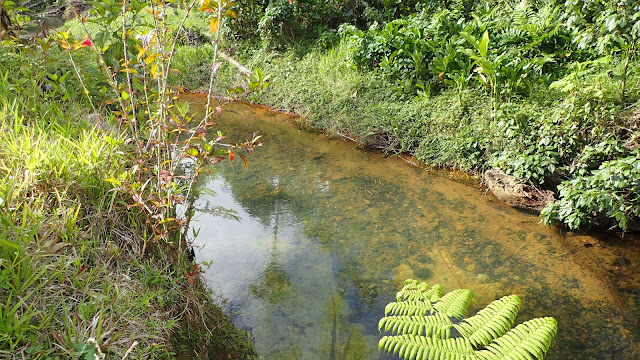 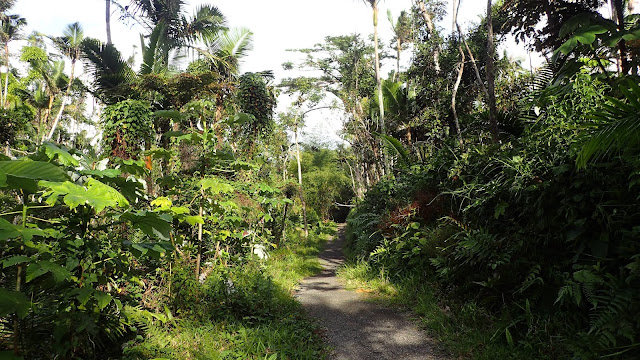 After we reached the pavilion, which had additional parking by the way, we continued our leisurely stroll down the shady path through the forest.  We're in the mountains here, so the temperatures are moderated by the elevation.  It's delightfully cool, even in full sunshine!

The hurricane damage was evident all along the way as what must once have been a tree-shaded pathway, was now sun-dappled.  The towering trees above us were all missing their heads, but you could see tufts of new growth beginning the process of re-covering this path.  Huge fallen logs, trees and bamboo were everywhere, but the forest is slowly reclaiming this place.  Thank goodness! 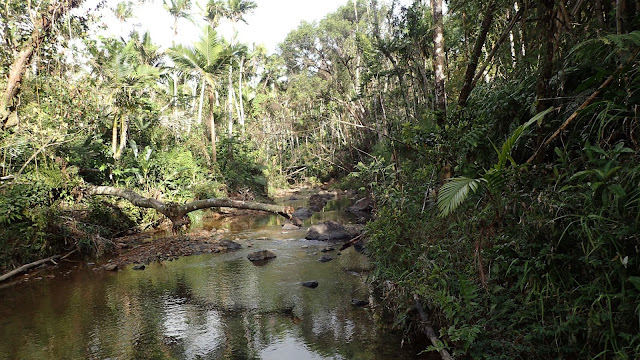 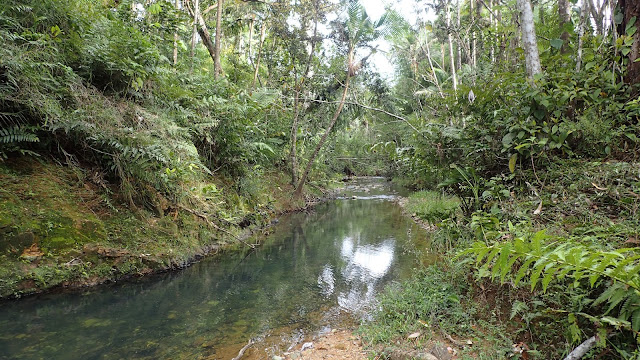 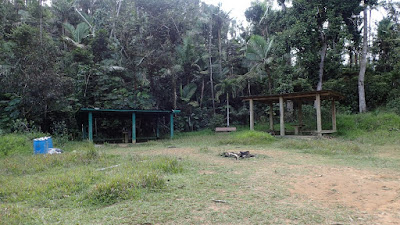 Just when we were beginning to wonder how much further it could be, we saw the final river crossing and some structures up ahead.  We could hear voices so someone must already be here enjoying the pool.  The anticipation was building...
The pathway opened up into a large clearing where we found two roofed structures where you can leave your belongings to keep them from the frequent rain showers.  The pool was emerald green and clear with the deepest part being about 12 ft in the centre.  There are two babbling streams that empty into the pool by way of tiny waterfalls.

It is a primitive oasis and so inviting!  A young couple was already in the water.  The young man was struggling to move a fallen tree from the near shore.  Glenn and Ruth spoke to him about the pride the Puerto Rican people take in these hidden treasures.  It shows in how clean this site remains.  They all take part in keeping it free of litter, even to the extent of removing this tree!


We climbed the little falls and could easily have continued on across to see what's on the other side where another stream enters the pool... but we'll save that for our next visit.

The Sun is beginning to set and we want to be home before dark.  These twisting, steep and winding roads are a lot of fun in the light of day, but I'm not ready to navigate them in the dark quite yet.

On our way home we spotted a couple of other places we want to visit... so our next adventure is already in the making!  We can not wait to explore all of these little places with our friends!  Like us, they have lived here for some time and want to keep the sense of wonder and love for the island fresh.  But you have to take an active role in keeping the enchantment alive in order to succeed!  I think our chances are good because the honeymoon is not over!