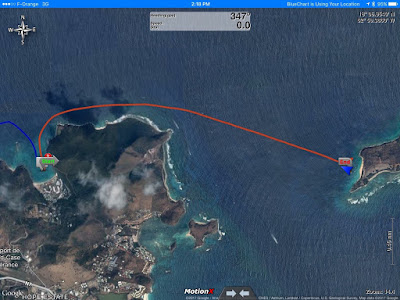 Since leaving Marigot Bay I’ve been obsessed with visiting a place called Ile Pinel.  It is a place that can reportedly only be safely navigated by those with local knowledge… or by lucky Cruisers who get a weather forecast of conditions benign enough to allow for safe navigation into East facing Orient Bay.  With increasing frustration I listened to the forecast of exactly the right conditions to enter… but with a weather window that was really too small to make it worth the effort to get into the anchorage… and because it’s Easter weekend… there might (will probably be) be a crowd! 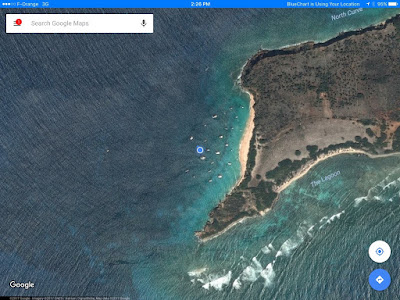 So… I decided to just settle down and be reasonable.  Not something I do often.  What is our objective?  We want clear water, maybe a beach with nearby snorkelling opportunities and a place to get off the boat to take a hike for some exercise.  Optimally we would have all of these things and we would have this wonderful place all to ourselves… but again, it’s a holiday weekend and there are LOTS of charter boats out… Being alone was too much to ask. 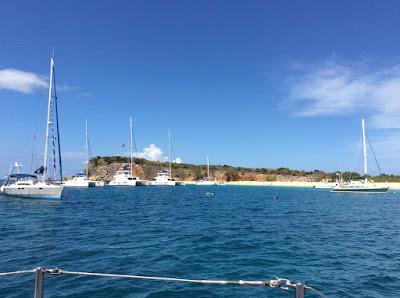 We arrived at Tintamarre mid day and found many boats already anchored off the beach.  The guide book says there are moorings but we only saw a couple and they were taken.  So we put down our anchor in about 20 feet, once again thankful for the extra length of chain we recently installed…  We relaxed and just watched the other boats come and go, which is always entertaining! 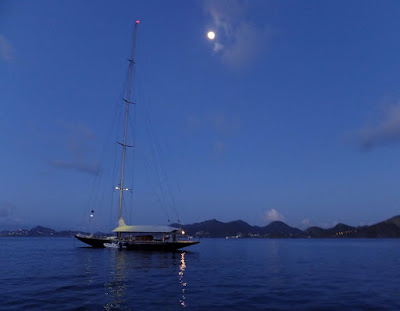 The boat closest to us is a beautiful old girl we first saw in the BVI. She is long and graceful with obvious care taken over her appearance.  We felt sophisticated just lying beside her and took many photos of her. 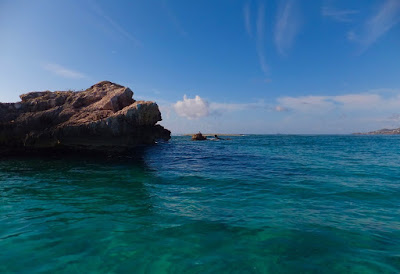 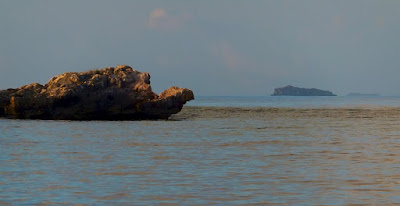 Bright and early the next morning we took the dinghy and first went around to the Lagoon side to take a look.  We thought we could land the dinghy over there away from the crowded beach to begin our exploration… but when we reached the point and saw that the waves were still too active for safe navigation in unknown waters, we turned back to resume plan A… the beach landing. 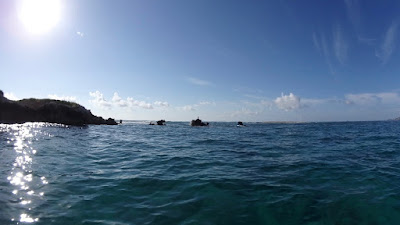 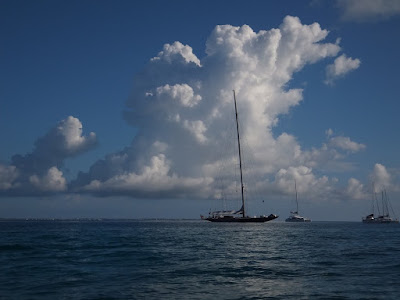 Some years ago I found a wonderful article (which I can no longer find) about how to land a dinghy in surf and anchor it off the beach.  It required some long lines and a good anchor… all of which (this was part of our boat project list) we now have.  Unfortunately it has been some time since I read that article and could only vaguely remember how it is done… and Bruce has never seen it… But… living in a small space 24/7, never let it be said that our lifestyle isn’t good for building communication skills… even if we don’t speak a common language!  I searched for and found a similar article to the one I remembered.  And with this visual aid, I was able to give Bruce a better idea of what I was trying to do… But since it was now mid afternoon, we opted to table our hike until morning and go snorkelling instead. 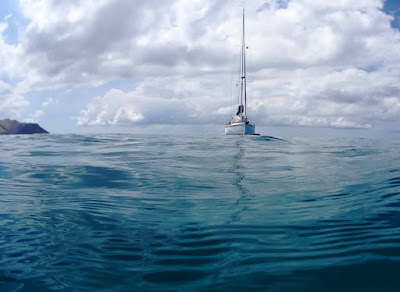 We began off the stern and swam to shore, a good distance with the threat of tourist excursion boats looming all around us.  Luckily they seem to be accustomed to snorkelers in the anchorage looking for turtles… so we made it to shore and back alive.  Unfortunately we found visibility to be poor close to the rocks and not much to see anyway… The highlights were the huge remora living beneath our boat and a single turtle. 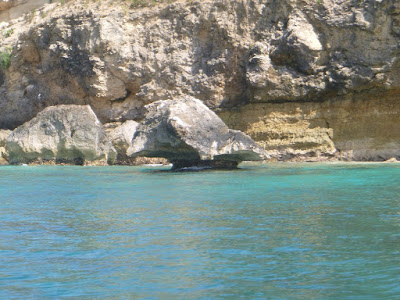 We loaded up the dinghy and went off around the point to our north to see if we could find a better and less crowded spot.  There is one mooring ball there and it was being used, but we thought to find a sandy patch to throw out our anchor closer to shore.  We buzzed along, watching a pair of white birds with scissor tails swoop and dive, obviously protecting their nest somewhere on the gnarled cliff. 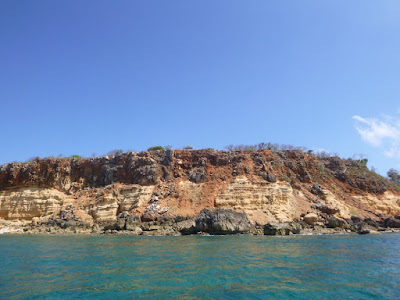 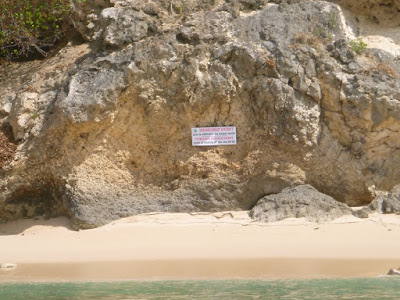 As soon as we spotted a likely patch of sand for anchoring, we noticed several signs prohibiting anchoring.  Well crap!  We found another sign and upon closer inspection realised that this area is a reserved nesting place for birds.  Not knowing for sure if the “no anchoring” signs meant that we couldn’t anchor close to shore, or anywhere in this cove… we dejectedly returned to the boat and started our happy hour a little early. 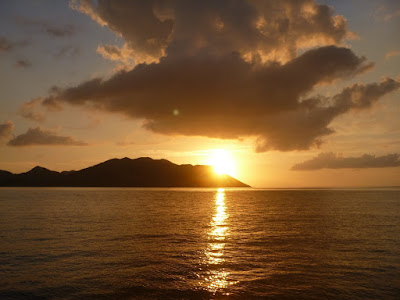 Very soon our disappointment evaporated…  you just can’t sustain a crappy attitude with all of this beauty around, no matter how jaded you are! 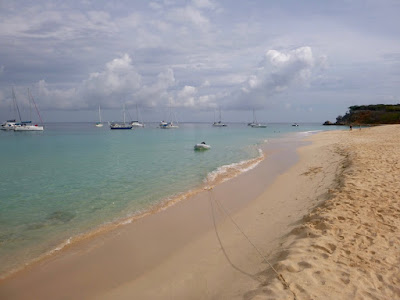 The next morning we were ready to try the beach landing once more.  We had our ground tackle ready, we went over the plan and were both ready to make it happen.  After a rough beginning… wrapping the end of our anchor line around the prop… we got back underway no harm done but sometimes I think there should be clown music playing in the background… we went straight back to that beach and showed her who was BOSS!

We deployed our anchor plan flawlessly and successfully.  And then we took off on our hike… hoping that the dinghy would still be there upon our return. 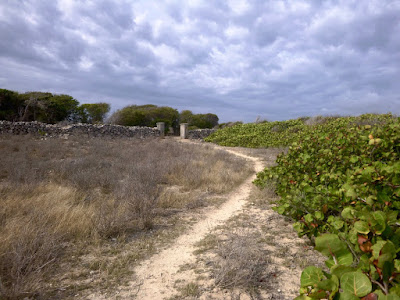 The pathway was clear to the other side of the narrow point of the island.  The decreased winds and waves would have allowed a dinghy landing here today…but we were glad of the exercise. 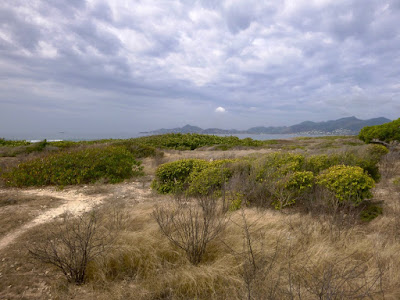 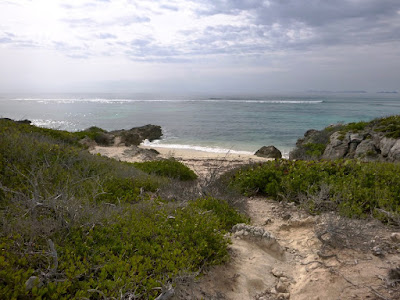 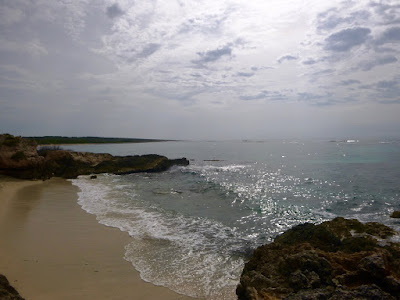 The only sign of others having been here recently was one set of new footprints in one spot along this strip.  Perfect!  We slowly made our way along the curve of the Lagoon… looking for shells among the huge piles. 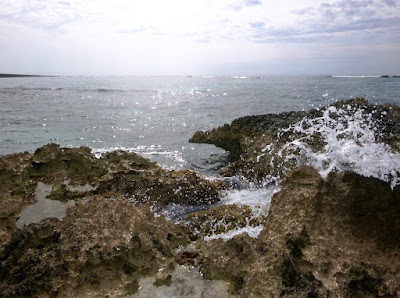 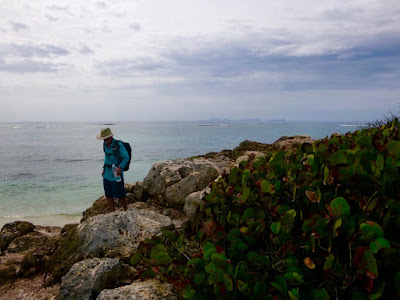 It began to get warm but Bruce had brought plenty of water.  We silently agreed that the wrecked up the beach boat would be our turning point and paused for a while to eat an energy bar and hydrate. 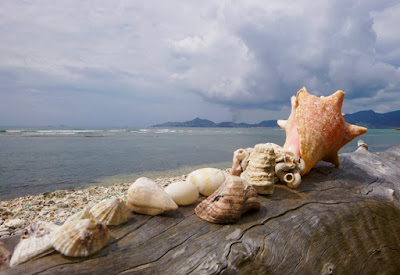 I went through my handful of shells and we had a little photo shoot.  I didn’t get anything really good, but at least I have photo documentation of the collection I will leave here. 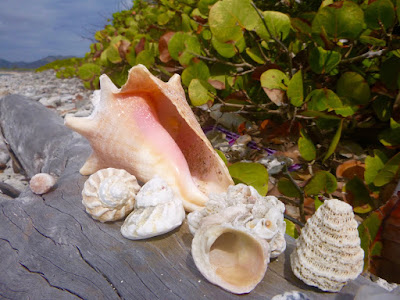 The small conch shell was liberated as Bruce threw it back into the water to provide a home for some creature or other while I selected one small shell to bring back to the boat to add to my very small collection.  I wish I had room for all of them! 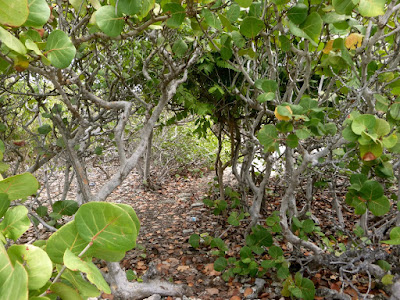 Eventually we began our return trek to the boat.  We took the over-land route, which was warm and windless…  I was glad we brought our new sunbrella for shade. 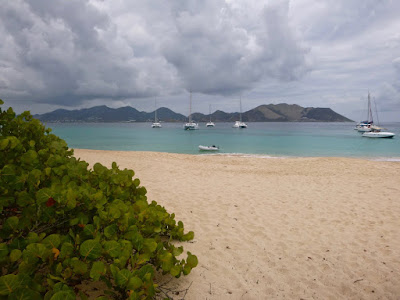 When we broke out onto the beach again and I think we both breathed a sigh of relief that the dinghy was exactly as we had left it… and our newly learned anchoring method had worked! 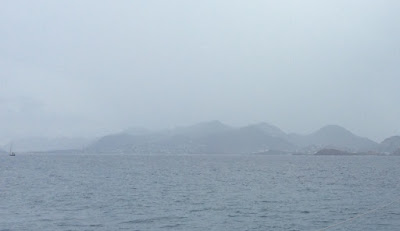 Back at the boat we realised that it was barely noon and that maybe we could still make a mad dash to Ile Pinel.  We decided to have some lunch to allow time for the raincloud that looked to be steadily dumping a deluge on our destination to pass… eventually that cloud dropped some rain on us as well.  We napped the afternoon away and when we woke up it was drying but still clouded…  Once again we abandoned Ile Pinel and opted to observe a more conservative approach… we would move on back closer to Marigot and hunker down in preparation for some uncomfortably large north swells forecasted to arrive soon…  To be continued…