Where ya gonna go when the North Swell come?  Well if you don’t wish to return to the Lagoon… St. Martin has few choices without clearing out of the country and retreating to Sint Maarten on the south side.  Now keep in mind that all of what follows could have been avoided by just going back in… but then, we would probably STILL be in there… and we wouldn’t have had the chance to enjoy these last days in St. Martin as much as we did.

I’m going to go ahead and dub Grand Case as St. Martin’s best kept secret.  Why?  For many reasons.  Lets begin with the fact that in a North Swell, the difference between the anchorage at Marigot and here in GC is remarkable.  I can’t understand why the swell is SO much less here in GC… but it is. 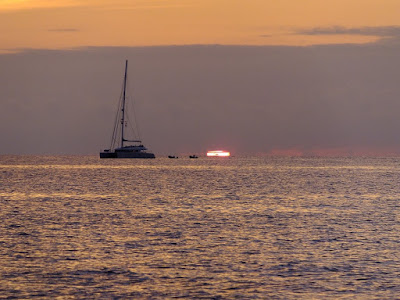 My only reasoning is that Marigot is closer to the western end of Anguilla and the swell creeps around with more energy… Maybe that energy has been expended before it reaches Grand Case, a mere four miles further on.  Maybe there is something in the way the sea floor is configured that brings the swell up sharply in Marigot but more gently in Grand Case.  Whatever the reason, if you’re ever caught in a mild North Swell and don't want to enter the Lagoon, head for Grand Case. 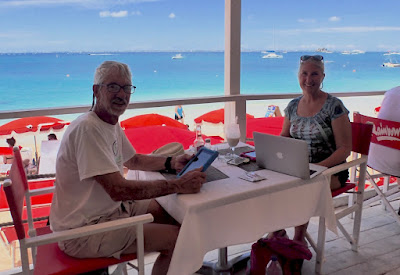 But there are more reasons to love GC than just the gentleness of the motion in the anchorage…  The tiny town is the culinary capital of St. Martin.  The main street is lined with restaurants and bars in which the hours pass pleasantly.  You can eat fine food for a lot of money or you can eat more simple fare, relatively cheaply… and everything in between. 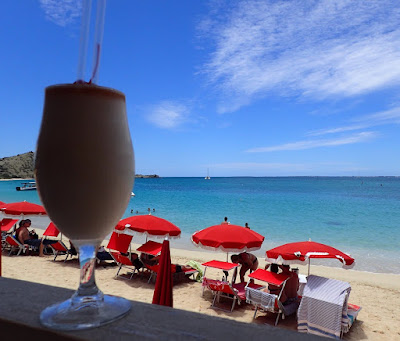 We don’t eat out a lot but we enjoyed a couple of happy hours and one very nice Pizza at Rainbow!  The owner was very attentive and went out of his way to make us feel welcome.  The view is perfection and there’s free wi-fi! 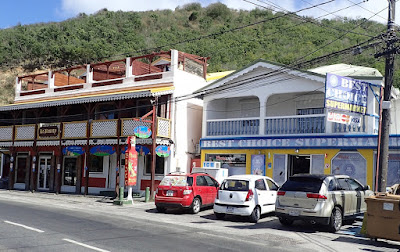 There are public busses that can take you to Marigot or anywhere else on the island very cheaply… There are several Chinese grocery stores that look small on the outside, but inside they house a surprisingly large variety of items. 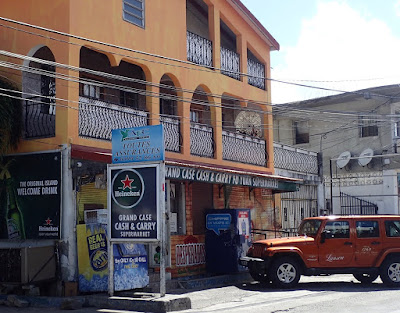 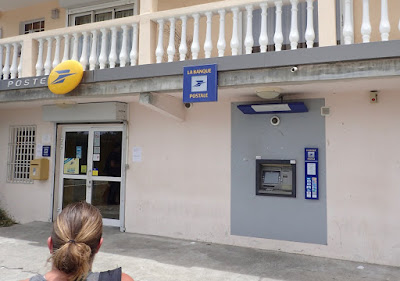 If you need cash, there is an ATM at the post office at the far end of the beach toward Marigot.  One day I went on an adventure with Rebecca (Summertime Rolls) to find cash.  We found the ATM out of order and the post office closing when we arrived.  Rebecca speaks really good French and was able to get us a ride to the next nearest ATM on the other side of the airport. 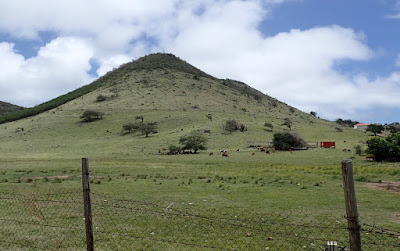 So while not technically “hitchhiking”… it sort of was…  We were whisked away to a part of town we hadn’t seen…found our cash and then walked a rather longish way back to the waterfront.  But the scenery was good and we needed the exercise… and Brian was holding our seats at the little beach bar where we had a couple of cold ones before going our separate ways.


So… back to North Swell Avoidance a.k.a The North Swell Quick-Step.  I'm just going to note the date and the place and tell the rest in pictures... 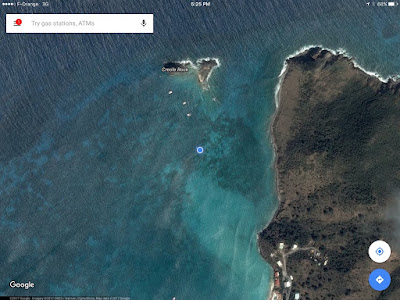 April 15th First anchorage in Grand case was near Creole Rock where we hoped the reef would break the swell coming from N-NNE.  It looks like our spot would be right in it but the waves were gentle... it was ENE the wind that whipped around the point in great gusts that finally moved us on...

Our first afternoon there we had near calm conditions and should have taken the opportunity to snorkel Creole Rock...

Our second day there we were buffeted by fierce winds and just hung out on the boat reading. 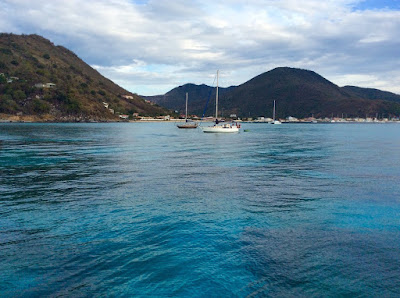 April 17th Second anchorage we moved closer to the rock wall to find protection from increasingly gusty winds whipping around the point.

I didn't get a screen shot of our position but we moved just a bit deeper into the anchorage and closer to the wall, hoping for better protection from the whipping east winds. 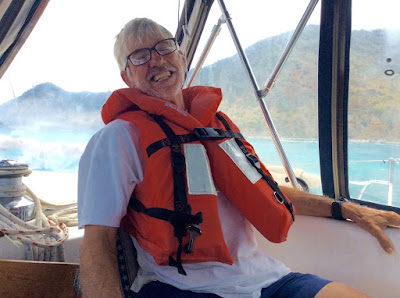 All morning we vacillated about staying put or moving.  Finally Bruce made his wishes known...  "Why didn't you just SAY you wanted to move???" 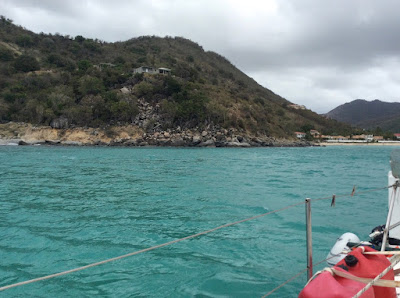 You can obviously see how calm the waves are here as compared to the picture above.  We stayed here one night very comfortably.

Strangely though, in the morning the winds had turned more north than we expected and we found our stern rather too close to those rocks for comfort... so we moved again. 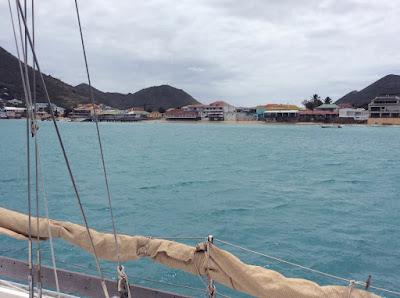 April 18th Third anchorage in Grand Case.  We moved closer to town as the swell was abating and the wind seemed better here and it's a shorter dinghy ride to go ashore.

Sometimes we are forgetful and sometimes we get away with it.  Other times not so much!  We forgot to pull the dinghy in close to the stern before our short hop... 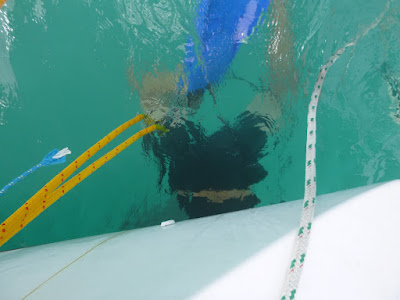 When it floated close to the stern while we set the anchor, I head a clunk and immediately switched to neutral...

Our new painter/tow lines float... but our lock cable does not.  It wrapped around our prop shaft and was severed in two...  Bruce went down to investigate and untangled the remaining bits... We were lucky it only cost us the price of a new (and better) cable. 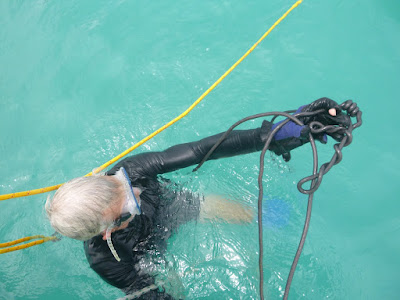 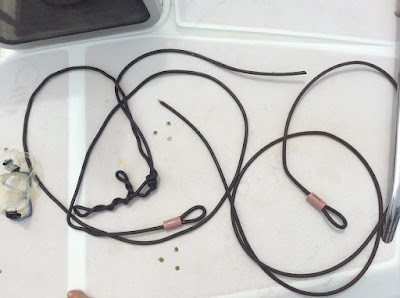 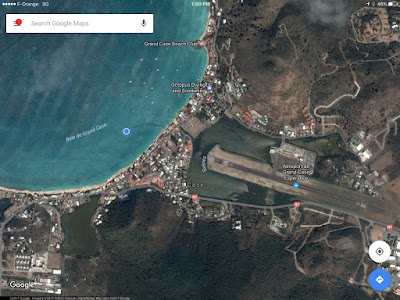 I think there really should be clown music playing in our background... Notice in this screenshot, we are right at the end of a runway!!!

The guidebook said nothing about this but when we got settled and looked around, we found the yellow buoys marking the danger zone...  We moved.  Again.  Don't judge... 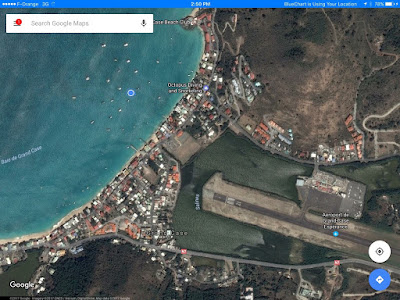 All of this for one night... And we didn't even go ashore...

April 19th We moved back to Marigot.  We needed to have our laundry done, pick up a package on the Dutch side and buy some gasoline and diesel in Marigot in preparation for leaving St. Martin… weather permitting… Soon. 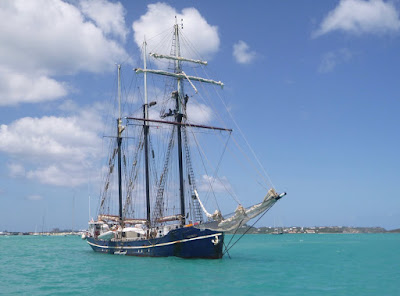 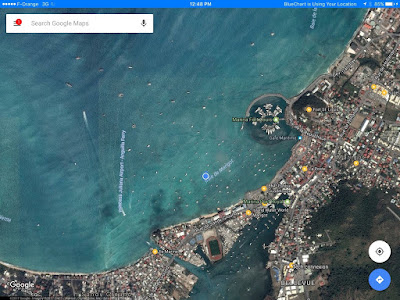 We found that even though the swell was almost imperceptible in Grand Case… it was still very much in evidence  in Marigot, with steep rollers making the anchorage very uncomfortable.

The Super U is nice.  It's big and has a huge selection of, mostly French, grocery and household items.  We came here a couple of times and it was fun shopping in such a foreign place.

But, most of our big grocery days we went to the Cost-U-Less or Prime Cash N Carry, or just shopped in the multitude of Chinese Grocery stores located about every block throughout the Dutch side...  Groceries are priced in local currency but very cheap by Caribbean standards, and as compared to US prices as well. 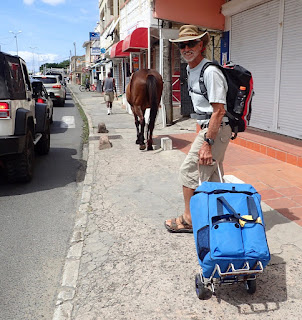 Leaving the Super U, we fell in behind a guy taking his horse for a walk through town.

The man walked along ahead and the horse followed him with no rope.  He once stopped to see what was inside of a bucket, but moved on quickly when he found it full of sand and cigarette butts...

Now and then the man would stop and scold the horse for not keeping up close behind... horse didn't care.  He had one speed...

People on the street didn't seem to notice that there was a HORSE walking through town!  Guess this is a regular thing... 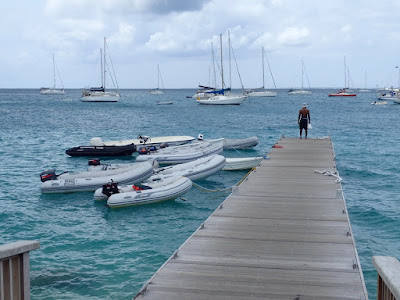 April 20th We fled back to Grand Case to wait for weather for crossing to Anguilla.  There was one more North Swell coming… 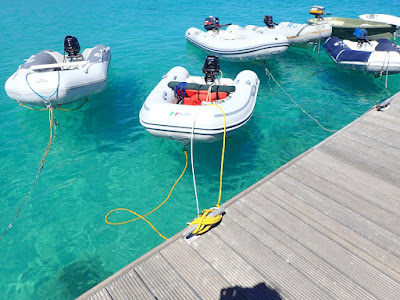 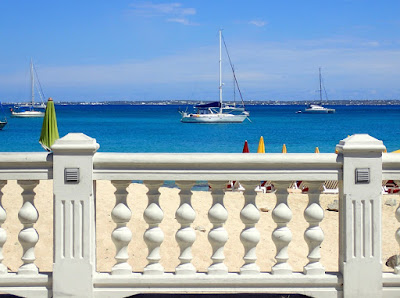 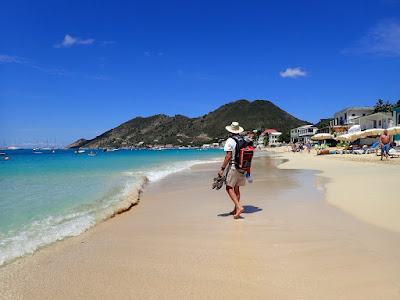 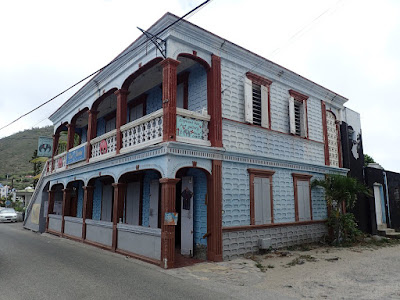 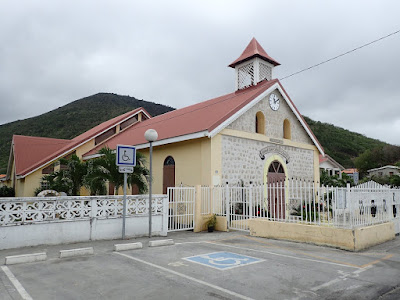 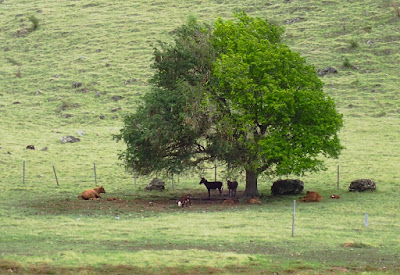 So we enjoyed the relaxed atmosphere and beach-town vibe of Grand Case for six days.  We could have just gone back into the Lagoon and avoided all of this shuffling.  But we would have missed six days of bliss, just relaxing in a picturesque limbo between the hustle of St. Martin and our next adventure in Anguilla.  Next time we may just make this our home base!