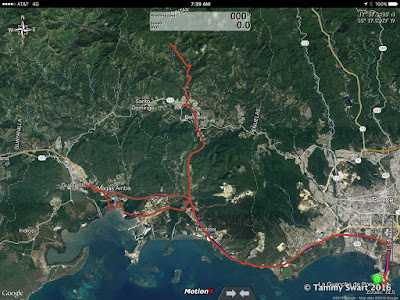 Most of our days are pretty good.  With days running in the 6-8 range normally on a scale of 1-10... today was at least a 13!  With our business out of the way, we had the whole day ahead of us and it was not even 11:00...  We drove out to Ponce Yacht Club to meet up with some Facebook Friends.

Facebook has been one of our best methods for meeting other Cruisers.  We "know" them long before we ever meet.  Today we met Kimberly and John-Michael from Pura Vida.  You may know their Facebook page  or blog Our Life Aquatic...

When we arrived at the marina, I wasn't sure where they were.  We were able to find their boat from just what we knew about them on Facebook!  It was awesome to see Kimberly striding down the dock toward us in real life after we've shared so much virtually! 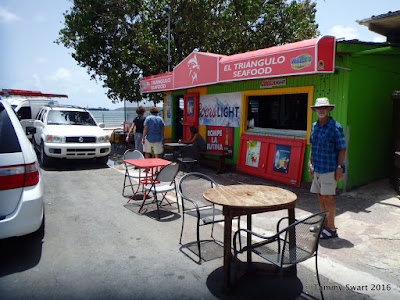 We could have just sat there in their saloon for hours sharing common past anchorages and talking about the ones we hope to visit someday... but we had a rental car and the day stretched before us!  You can see our track here in red.  We all piled into THEIR rental car and tuled out to a little restaurant that Kimberly and John-Michael knew.

It was almost comical as we tried to order lunch and time after time, we were told that "No hay"... or we have no... this or that.  We settled on what they did have, and continued getting to know one another over our first of many meals together to come...
Bruce and I didn't really care where we went, we were just happy to be out and about after so much time spent in the marina.  John-Michael drove us up into the mountains while Kimberly and I talked and talked... so much in fact that she was a bit derelict in her duties as chief navigator and we kept missing the turn and having to go back to try again. 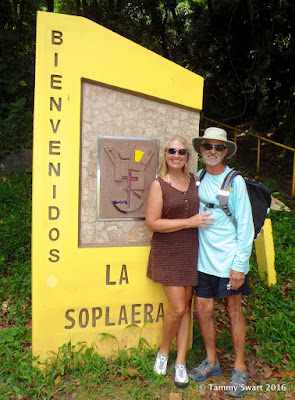 But we didn't care, we just laughed harder and eventually we arrived at La Soplaera Falls! When I told another couple in our marina that we were going to visit a waterfall about half an hour outside of Ponce, they were not aware of it's existence.  But there was a marker for it on Google maps... 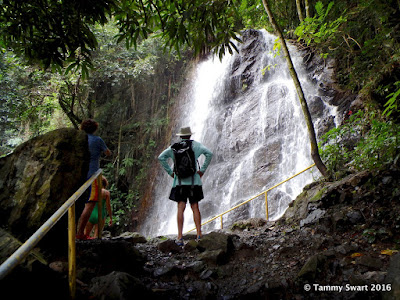 John-Michael led the way up the slippery and uneven pathway into the jungle.  There was a dilapidated railing provided but one whole section of the railing was missing. It looked as if a recent deluge had just taken it away as it lay mangled at our feet.

I looked up ahead in time to see Bruce just standing there looking up at the falls. 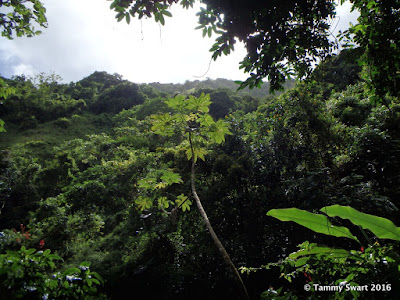 But that wasn't the REAL falls... oh no... We still had an even more challenging stretch to go before we reached our destination.

All the while as we were making our way through the rushing water, I couldn't help but be completely amazed at this place. 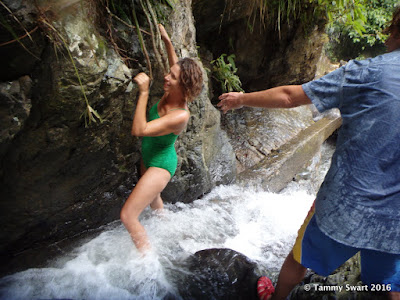 The beauty, the sound of the water, the power of it... The scents, the mist floating on rushing air currents... and the sound of the Coqui chirping in the forrest all around us... it all came together to make a magical place and we felt like it was ours alone. 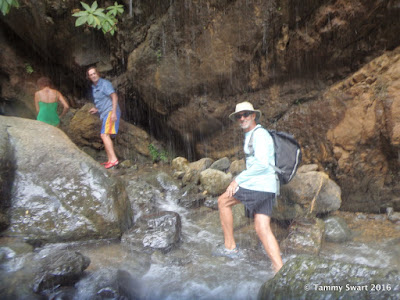 The excitement was overwhelming.  I ran out of words to describe it and fell short in my exclamations of just how awesome it all was.  How lucky we are to be doing THIS on a Monday... 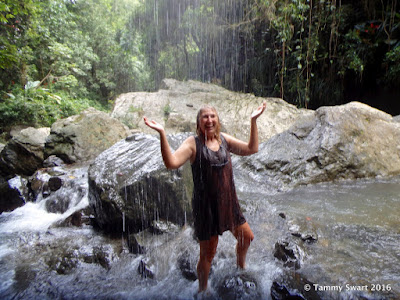 I mean... REALLY... Who gets to DO this sort of thing in their every-day life???  Cruisers, that's who!  Who doesn't have a dream of someday standing beneath a mountain waterfall, just laughing with good friends....

The path, and I use that term very loosely, became more and more treacherous.  Thoughts of danger and peril were crowded out of my head by the sheer delight of it all! 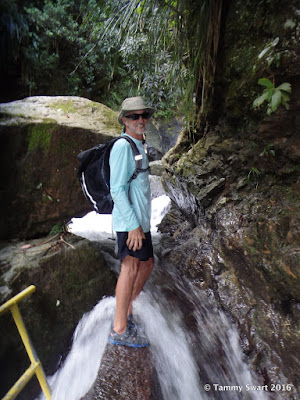 Bruce went ahead but didn't get too far... there were several spots where the rocky ledge was slick...Or where the force of the water threatened to take our shoes off or sweep our feet from beneath us. 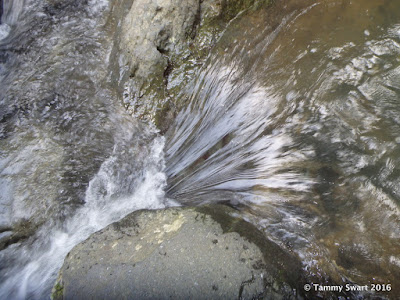 We had to place each step carefully and make sure it was solid before transferring our weight and moving the next step forward.  We literally climbed up the stream bed in spots and were soaked to the skin when we finally got our first look at the pool. 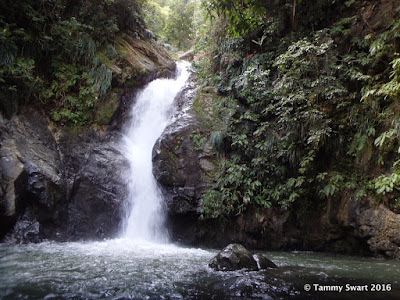 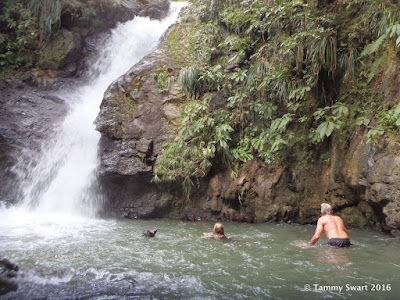 It was so beautiful... just like in a movie.  There was nobody else there, we had THIS all to ourselves!  The water was very cool and the air wasn't so hot this high up in the mountains.  Before we started the hike up the stream bed we weren't sure that we even wanted to swim... But we couldn't waste this chance and we were already wet anyway.  Plus the physical exertion from getting here warmed us up... 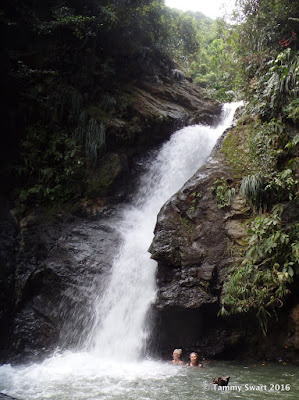 We spent the afternoon frolicking in the water, laughing and whooping and trying to get under the falls without getting our heads pounded. That water was coming down hard!!! 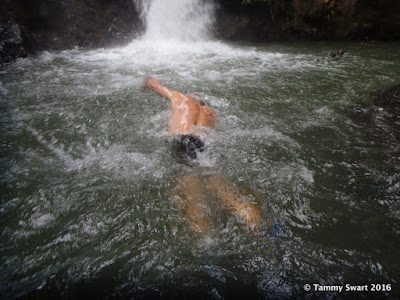 The current swept us away as we crept along the rocky basin. Bruce tried to swim to the falls but was taken off to the edge by the force of the water...  It was hilarious! 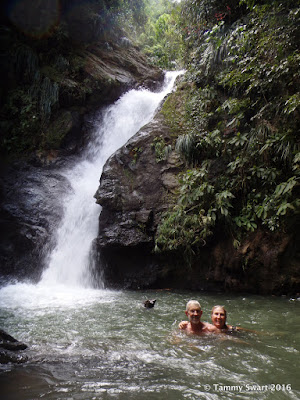 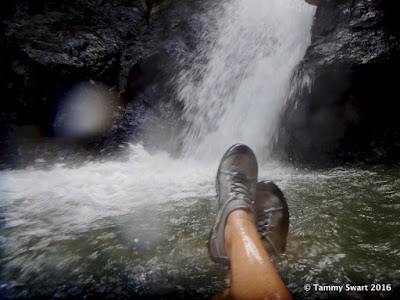 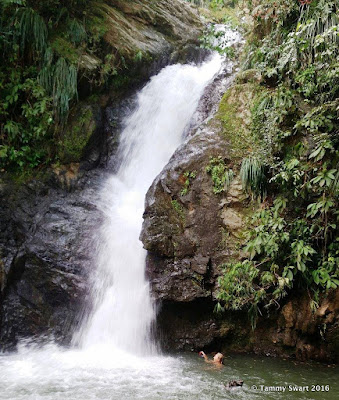 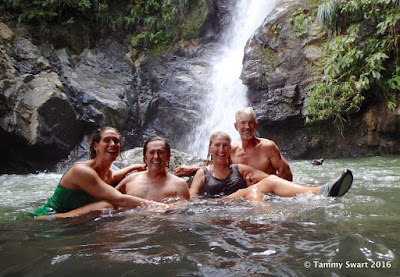 WOW.  Just W. O. W.  An experience like this one makes new friends into old friends very fast.  The fact that we had only just met a few hours ago seemed incredible.

Words can't describe this experience.  Until you've climbed up a mountain stream and frolicked in a waterfall pool... you just have not lived.

We were pleasantly tired on the drive home and decided to save further exploration for another day.  We look forward to seeing these two again soon when they come to Salinas!

Thank you Kimberly and John-Michael for sharing this place with us.... AND for taking the pictures below of us! 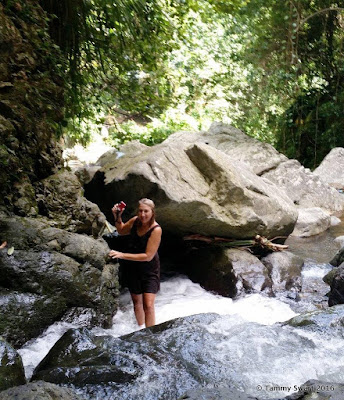 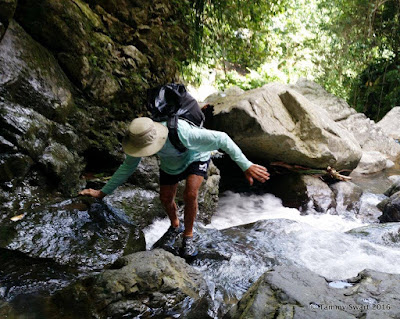 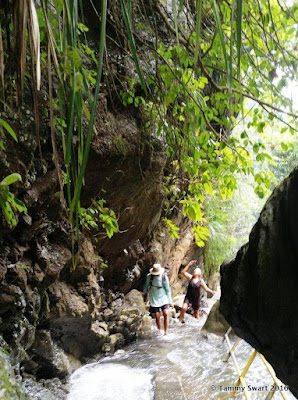 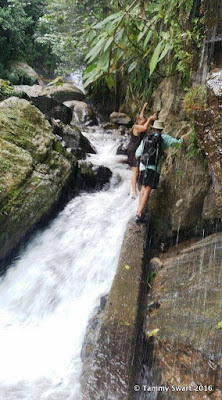 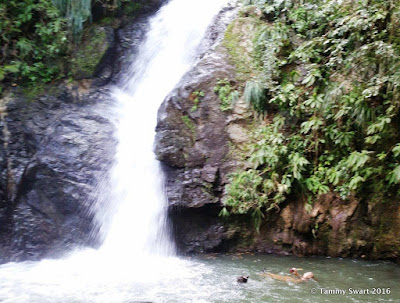 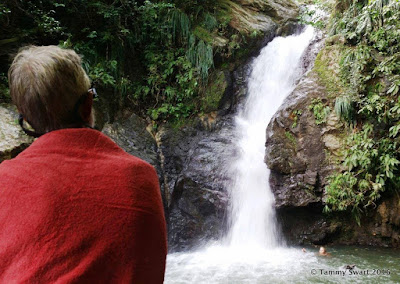