Yes, we are procrastinators.  There.  I've admitted it.  Since we arrived here in Salinas over a month ago, we have been putting off our trip into Los Jobos to get acquainted with our hurricane hole.

After listening to the forecast this morning, our procrastination came to an end but it looked like tomorrow would be less windy for making the ten mile dinghy trip.

Before I was even out of my jammies, Henk knocked on the hull to tell us that THEY were going to run out there and wondered if we wanted to tag along.  OF COURSE we do!  Safety in numbers and all that.  Our outboard engine is not the most reliable and that's a pretty long distance for our little "family car".


Henk and Susi helped us drag our dinghy over the dock to splash it without moving the boat (we are backed into our slip with no room to maneuver the dinghy off of the davits).  Then we followed them out of our cozy bay and into the wind!

Well so much for the wind being lighter early in the day.... It was already blowing and the waves were pretty big for a small dinghy... but bouncing along with the warm water dousing us entirely was a hoot!

We haven't had this much fun in a while!  We had to stop a couple of times to work on the outboard... The outlet for the raw water flush kept clogging... and by the time we reached the turn into Los Jobos it sounded like our spark plugs had fouled... so Bruce had to change them out...  Sigh...

Bruce was becoming more and more agitated by the time we reached the estuary...  He was worried that we had used up about 2/3 of the fuel in our tank... We never run it wide open like that so it was sucking it down...  And why does "adjusting the throttle cable" keep getting pushed further down on the "to-do" list anyway...  Bigger sigh...

So we motored slowly into the area where the chart shows the most shallow water and I started checking depths as we crept along.

We bought our little hand held depth sounder in 2011 and it's still working like a charm.  It only reads when you're going kind of slowly, but that's our only complaint.


The most shallow spot we found was about 7 ft.  That's plenty for us to get in with the big boat.

We tested near the banks and up into a sort of cove... It shallowed up there fast!

The open bay to the left of our track is where we will probably find our spot.  Of course we will talk to the locals when the time comes... but it is my understanding that we will park our nose up into the mangroves and tie on.  (That way our rudder doesn't get bounced on the bottom, risking damage.)  Then we will put out two/three anchors spreading out from the stern.  There should be plenty of room for lots of boats up in the estuaries.

There is no way for big waves to form in such a short distance with the mangroves all around... and the narrow, shallow entrance will help keep the surge to a minimum.

The plan was to continue on around the bay and into the next one but Bruce was too worried about our fuel consumption. 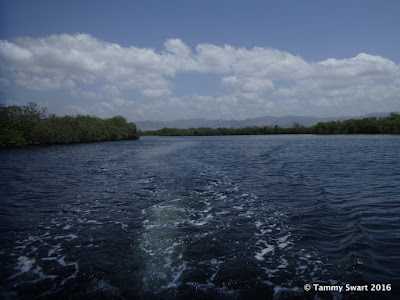 So we left Susi and Henk doing their depth survey, hoping to be able to share their results... and we took off homeward bound! 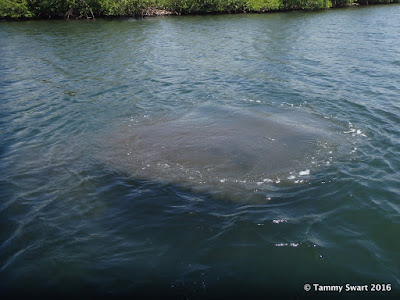 On our way out of the estuary we saw several manatee rolling and flopping their huge tails.  They were shy and didn't want their picture taken, but I did get this one big mud cloud.  One powerful woosh of a tail stirs up a boiling mess of stinky swamp bottom mud...


Of course going back WITH the wind was much more fun (and faster) than going against it.  We whooped as we surfed on the big waves and we made the trip back to the marina in half the time our outward bound trip had taken.

And we used a LOT less fuel... so we didn't need to do all of that worrying about running dry... BUT... we had only about two tablespoons (slight exaggeration... but not really) of fuel left in the tank... so there's that.

So.  Now we have a visual and feel a lot better about going into Los Jobos if this storm comes our way.  Hopefully we won't have to initiate our storm plan..because it's a LOT of work... But we are doing some of the little things so that we will be ready.


This video posted by Distant Shores TV has given us a visual of what it will be like during a storm.