Someone Else's Vacation Photos (Mine)!

Because this is my blog... where I store and share memories of things we did... The following is a brief (yeah right) account of my Vacation from my vacation life.

Soon after our arrival to our Summer 2016 Home in Salinas, PR... I left Bruce and Jezabelle behind and jetted off to visit with my daughters in Florida...

Yes, you heard that right... DaughterS... My eldest lives in Florida and my youngest lives in Guam.  When I learned of Brittney's planned visit to the 'States I had flights booked before Bruce had a chance to change his mind!

Random Perk:  of living in Puerto Rico... cheap airfare!  I paid $308 for my round trip ticket to Florida and we got Bruce's ticket to Kansas in October for $350!

I left Puerto Rico on July 28th to return on August 9th, giving me time before... and after Brittney's visit to spend with Melissa and her husband, Michael.  That's a LONG time to be away from Bruce and the boat... and my kids are probably in agreement...  But they were wonderful and provided me with a nice room, a private chauffeur not to mention meals and all the internet I desired!

Oh... and a mailing address!  Days before my arrival, my packages started showing up on Melissa's doorstep providing her with a false sense of "Oh-Goodie-Goodie" that was soon dashed as she realized that the growing stack of boxes was for ME!  But... some of them contained pressies for her and my other daughter so all was not lost!

Random Problem:  In my other life I had a nice set of luggage.  Now that I live in a shoebox I have no room for luggage.  I ended up taking one of our big duffel storage bags as luggage and it held exactly the weight limit allowed by the airlines.  So after buying a truckload of clothes and miscellaneous boat bits to bring back to Puerto Rico, I also had to purchase a wheeled carry-on suitcase to carry my treasures home.  Bruce will use it when he travels to Kansas later on. 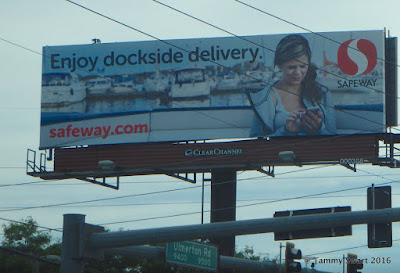 Being back in the United States suddenly was really strange for me.  It's like a switch is flipped in my head as I leave one life and enter another.  A life of cars and access to... everything!

I had a list of things I wanted to eat like Chick-Fil-A, real Mexican food, General Tso's chicken...  And veggies!

The veggies we get in the islands (if we can get them) are already old by the time they arrive here unless they are grown on the island.  I haven't developed a taste for many of the locally grown veggies... so walking into the Jam's Produce Market... was like a dream come true.  We loaded our basket... picking up nearly one of everything like kids in Willy Wonka's Factory... and then THIS happened!  Guess the veggies in Guam aren't great either!


Unfortunately my camera battery died (and I didn't realize that I actually HAD brought the charger until I was packing to leave) so I have only a few pictures of the visit.  But maybe that was a good thing... It left me free to just enjoy without always snapping pics.

But I was glad that I had a few to commemorate this bubble of time with my kids. Here are a few highlights!

How long has it been since anyone I went BOWLING???

My daughter is a very busy woman.  She is on SO many boards and committees, it seems that she always has some event to attend.  I was brought along as her +1.

We played two games and I was welcomed by this group with warmth and enthusiasm!  It wasn't until after we left that I realized one of the people I had met there was The Mayor Of Largo!!!.

Yes, my daughter hob-nobs with the Mayor! 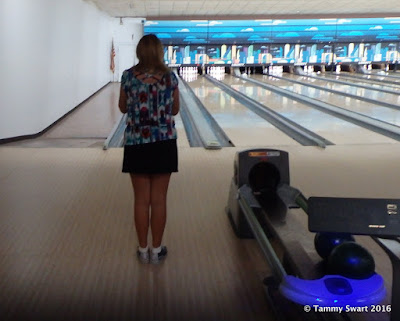 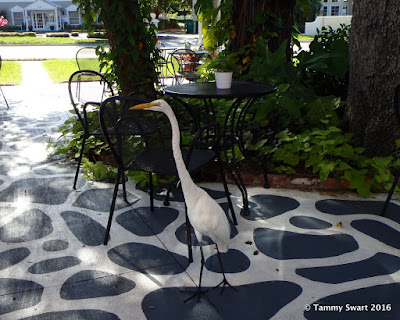 Life in Florida isn't completely different from life in the islands.  Some things are very much the same...  Wildlife wandering through your favorite breakfast place for instance...  The kids took me to a delicious bakery one morning for breakfast and we were stared down by a hungry shore-bird. 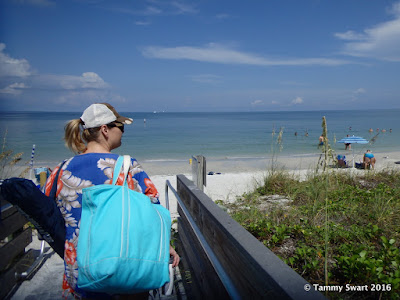 Melissa and I took a day off (from her work) and relaxed on one of the many beaches... You would think I wouldn't want to go to a beach on my vacation... but going to a beach with my DAUGHTER is high on my list! 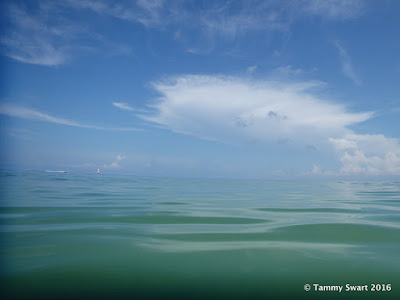 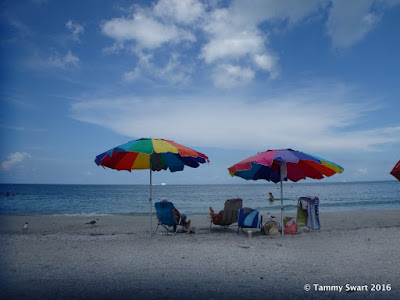 The girl has a pool in her back yard!  When we weren't driving around looking for just one more thrift store to shop... we played with my grand-dog, Kira, in the pool!  Oh... and we had ICE CREAM! 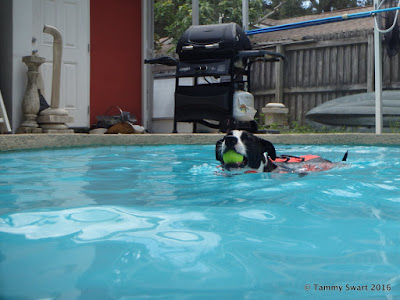 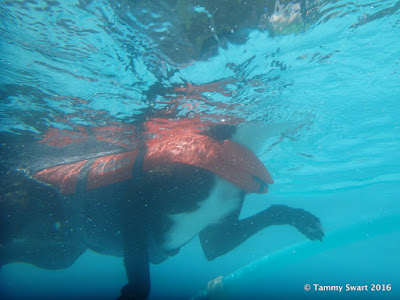 As usual we had a little bit of rain almost every day.  It seemed that every time we got out, it was raining where we wanted to go... and picking Brittney up from the airport we got this!

I'm so upset that I don't have more pictures of Brittney's visit!  This event pretty much was the end of my camera battery.

We joined a small group of Melissa's colleagues at Hamburger Mary's  for Drag Queen Bingo. 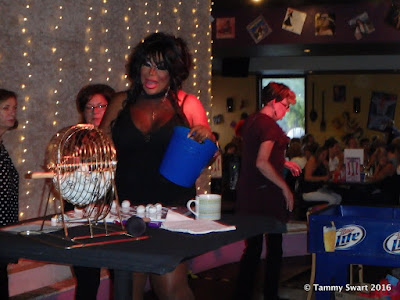 Wait... we're doing WHAT???  Imagine my consternation when I heard that my normally reserved daughter calmly announces that we are going to Drag Queen Bingo... as if we ALWAYS do THAT!!!

It was so much fun!  The place was PACKED.  The announcer was a hoot! 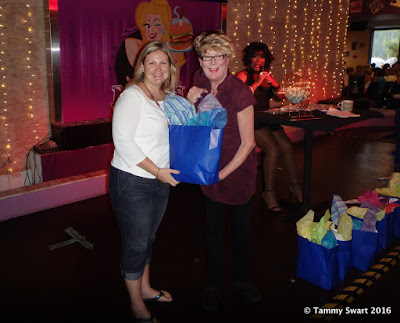 Melissa tied for the win in the first hand and she got the prize in the tie-breaker. 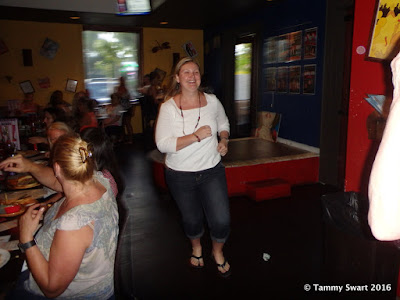 This caused her to have to run around the entire restaurant while everyone threw their wadded up Bingo cards at her! 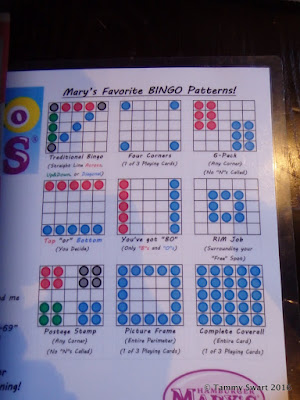 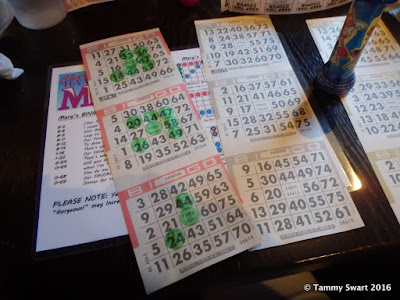 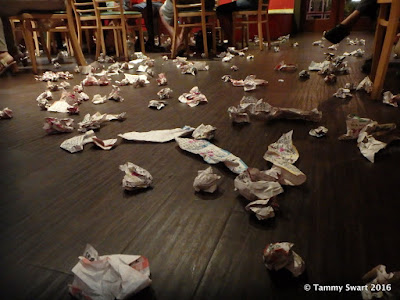 By the end of the evening the floors were littered with game cards!

I have never been to Bingo before.  We played ten games and had a delicious dinner along with lots of laughs.

The proceeds from the night went to Melissa's organization's chosen charity so it gave us all the warm-n-fuzzies too!

Sadly Brittney jetted away to the next stop on her more-than-a-month-long itinerary.  It was almost too sad to see her go.

Her trip included California, Nashville, Florida, Texas, and Virginia with a final stop to see her husband in Japan!

Melissa and I continued to spend time together doing mother-daughter things. 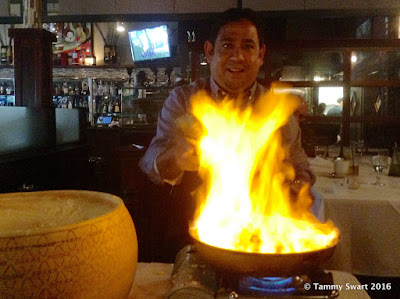 I rode along with her Take-Your-Mother-To-Work style on several showings (she sells real estate) and we had dinners out both with her husband's family and with my friends.

Our last outing before the dreaded ride to the airport was to the nail salon to have our toes done!  I can't tell you how long it's been since I had one of THESE!

While I was in Florida I spoke to Bruce via Skype almost every day.  It was good to see him (video Skype) but I was really missing him and our home...

Maybe thirteen days is too long to be away from my husband and my life.  I was very sad to say goodbye to my kids... but I was very happy head back home...