No More Drinking The Cool-Aid - Medical Care Outside The US 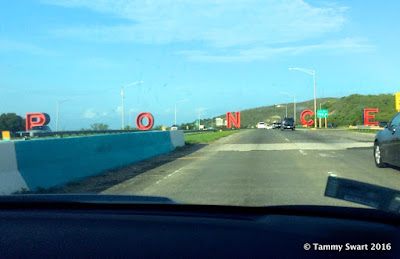 Well I guess it can be argued that Puerto Rico is PART of the US... but when you get up to that payment window at the dermatologist's office... it definitely is NOT!

We rented a car so that we could drive over to the big city of Ponce for a visit with dermatologist Dr. Jaime R. Villa-Colón.  He was recommended to us by one of the cruisers here in Salinas and she couldn't say enough about him... 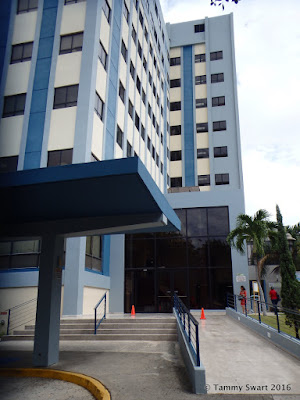 Bruce has had some previous skin cancer issues and it's been more than a year since he's been checked out... and I NEVER have.  Perhaps after a lifetime as a sun worshiper and three years living on a sailboat... it's time!

I've got a few spots that have been behaving strangely and just wanted to get them checked out.

Our biggest fear was the cost.  What would it cost for me to see a dermatologist with no health insurance?  Bruce has Medicare, and they take it here in Puerto Rico... but not only does it take...like...six months or more to even get an appointment for a skin Dr. in our home town... the cost would be at LEAST a couple hundred bucks for the visit alone... without doing anything!

We entered this professional building and found ourselves taking a step back in time.  There was no air conditioning in the common areas, odd... but it was all very clean and quiet.

We squished ourselves into the rickety elevators, stuffed to capacity with patients.  The hallway on the 4th floor looked like something from the 70's... or maybe a VA hospital!  It was all very old... but sparkling clean.  And there were no musty smells...

We were NOT prepared adequately for the language barrier...  There was one woman at the receptionists area who could speak limited English but she was very nice and we got things worked out. 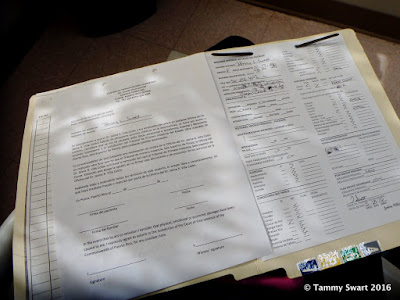 The waiting area was full of people... maybe 15 or so sitting in the utilitarian but clean plastic and metal chairs lined up in the bare room.  There was a TV playing a soap opera in Spanish.  Everyone was silent.

I was called up several times to the desk to answer questions and get our paperwork... the actual medical charts...  I took them to our seats and opened them up to complete the forms.  They were in Spanish only.  No English subtitles.  It was a little bit of a shock as I expected that something as important as a medical record would at least be bi-lingual.

I went to work reading the forms and between my limited knowledge of Spanish, the similarities of many words in both languages, and the fact that I knew pretty much what was supposed to be on the forms... I think we did pretty well.

There were only two forms, front and back... not the pages and pages you would expect at a medical office in the States. 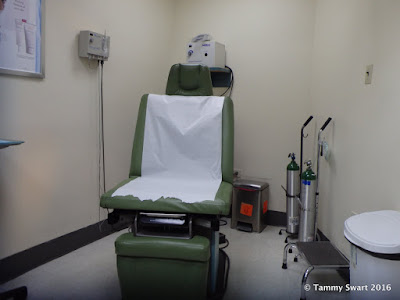 Also unexpected... we were called back to the inner waiting room really fast!  There were six chairs lining the anteroom with four exam rooms.

Again, we expected to wait... But I was called in after the first patient came out.  A nurse gowned me and I waited only briefly before Dr. Villa came in.

While waiting I looked around the exam room looking for anything that would support the level of warning about healthcare outside the US that I was so used to hearing.

The room was ultra-clean.  The equipment looked in good repair.  They had computers... just like in the US... Everything looked really good!

When Dr. Villa entered, he was very charming and spoke excellent English.  We talked a bit and then he looked me over.  He chastised me about not protecting my legs adequately as he said I had a lot of sun damage... He was surprised that the rest of me was in pretty decent shape, skin wise anyway!  I've always worn simple Oil of Olay face cream with SPF 15, and most of the time when we are going to be in direct sunshine for long periods I wear sun protective shirts.  But I will admit that I often go without covering my legs... 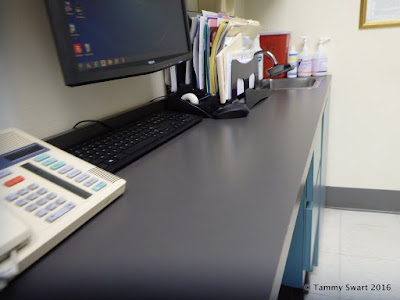 He reassured me about a lot of my trouble spots (just aging) and treated three areas, one especially suspicious on my thigh just above the knee, and two others on my right hand.  He treated them with liquid nitrogen, it stung a bit but didn't really hurt.  Then I was free to dress and join him in the room with Bruce.

Dr. Villa had a student shadowing him on Bruce's exam.  He went over Bruce thoroughly and found one small spot on his face to treat.  We talked some more about what to look for, he gave us a pamphlet and said we were good to go for another year!

Next, we came to the really scary part.  Paying the bill.  We have funds set aside in our budget for medical care so I wasn't worried we couldn't pay it... but nobody wants to let go of that little padding in the bank account.... The receptionist flipped back and forth between the papers in the charts... She entered stuff into the computer... then the English speaking woman came up to deliver the news...

I was speechless... Quickly I schooled my face to appear nonchalant about it while I poked Bruce insistently to hand over the credit card... hurry, before they change their minds!  We headed for the door and the elevators to freedom!  We only had to get through the parking lot payment window... $2.75!

It was almost 10:30.  We had been there for less than two hours... I know that patients in my former employer's office routinely waited in the outer office longer than that!!!  And their bill would be more than that for one person, let alone TWO NEW PATIENT VISITS!!!

I've worked in healthcare most of my adult life and sure... I've been drinking the Cool-Aid... but no more!