I hadn't realized how reluctant we had become to move about when conditions weren't perfect.  We have enjoyed the luxury of time.  If the winds aren't conducive to a happy sail, we will just wait until they are.  If the anchorage is rolly we'll just leave... no matter that we didn't get to snorkel that spot, we can just come back when it's better! 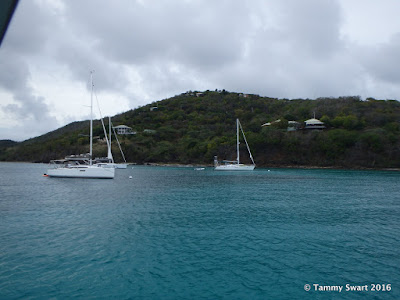 All but one of the mooring balls were taken when we arrived at Melones Beach... we left that last one to La Vie Dansante... We found a good spot to anchor in shallow sand up closer to the beach where we had hoped the waves would be more kind.  They wrapped around the point and pretty much provided a lively rolling motion for our sleeping pleasure...  It didn't look like the folks on the mooring balls had it any better, so we just relaxed and enjoyed this beautiful spot. 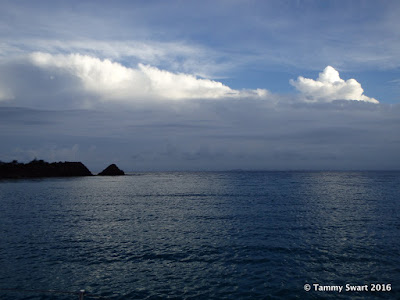 The past 24 hours had been a whirlwind of activity.  We were exhausted and just happy to let the evening roll out while we settled in and anticipated the coming week with our friends.

We didn't want to be "in their way" but we wanted to spend as much time with them as possible.

I can't explain our position exactly. It was very strange to be so eager to fall in with our old crowd, and yet... we felt so separate.  So different from how we were before.  Our lives have changed so much and it is a strange feeling to have friends from home here... in our world.  Temporarily.  When for us... it isn't. 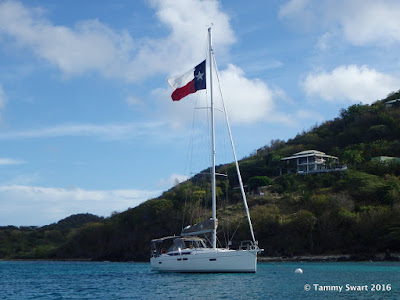 Bright and early the next morning we dinghied over to La Vie Dansante.  Looking across the anchorage and seeing that big ol' Texas flag waving brought smiles to our faces! 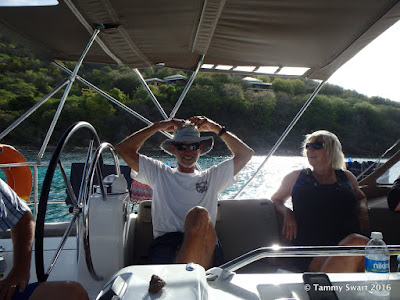 Our feelings of isolation disappeared as we sat there in that cockpit and conversation flowed as if we were only separated by a work-week instead of more than two years of cruising. 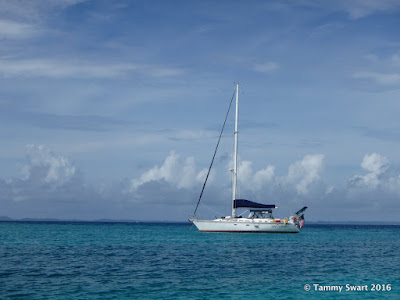 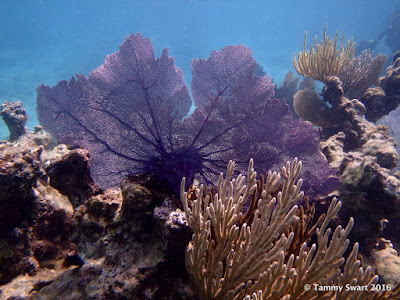 We planned our day and had a nice breakfast, then plunged into our first activity for the day... snorkeling!

There are rocky reefs all along this east side of Culebra with plenty of mooring balls so that boats are spread out.

We found healthy fans and plenty of fish.  I should have followed Bill around instead of going off on my own photo shoot... He has a marine biology background and knows where to find the best critters...

But I found lots of goodies on my own too... 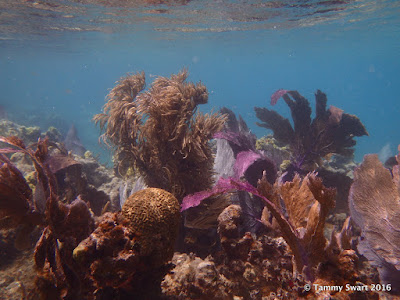 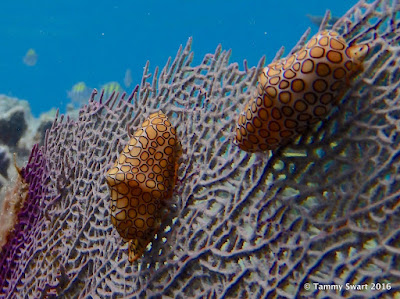 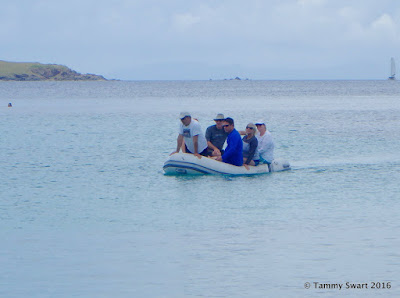 Moving right along... This bunch has limited time and wanted to pack in as much fun as possible...  We moved the boats down to Carlos Rosarion.  The moorings were all taken, most by commercial boats.  This is a popular spot! 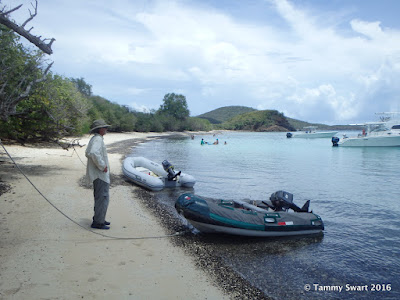 We both had to anchor in deeper water, 40 ft.  No worries, we wouldn't be there very long.  We dinghied ashore, Bruce and I were there to help the others land... That poor dinghy looks a little overloaded! 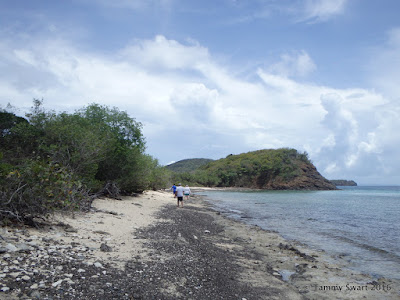 Our objective for the afternoon was a visit to Flamingo Beach, reportedly one of the most beautiful in the area.  This involved a hike first, which was OK too. 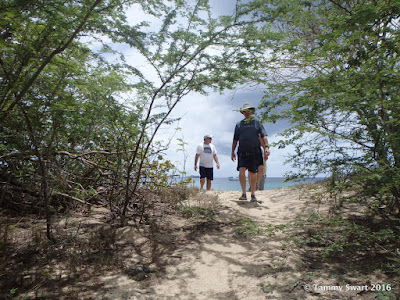 I had no idea where we were going.  Letting go of "The Plan" and going with the flow is difficult for me.. but I left the iPad at home and just followed our friends.


It was almost comical as the eight of us trapped along the hot dusty trail trying to find this beach none of us has ever seen before...

We found this one beach, but it wasn't Flamingo.  So we continued on.  The walk was supposed to take about 25 minutes... and it was every bit of that and more. 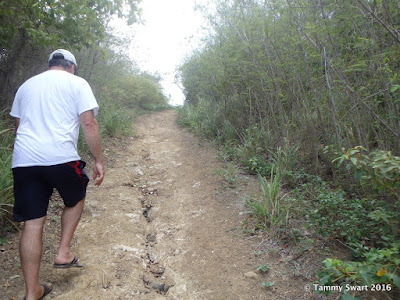 We had to climb up over the top of the island before the terrain got easier.

By the time we were finished, we were all huffing and sweaty.  The image of a beautiful and pristine beach hovered in our minds as the reward for this unaccustomed physical exertion... 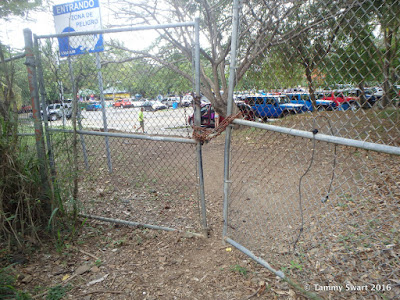 But when we arrived at our destination... our mental image fizzled with an almost audible thud!

We were met with a chained gate through which we had to squeeze our mature selves... only to walk across a very crowded parking lot full of about a hundred rental jeeps. 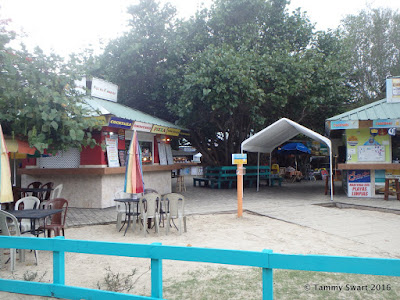 Then we walked past a shanty-town of vendors selling food and souvenirs.  This was NOT what we expected at ALL! 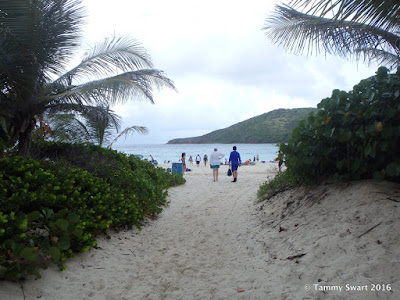 Evidently this Flamingo Beach is more popular than we thought!  But we found the pathway to the beach that opened upon the promised beautiful beach... 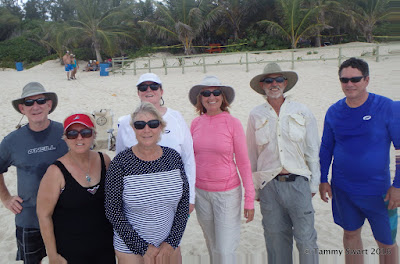 Where we whiled away the afternoon with our friends.

OK, so Bruce and I sat on the beach in the sand while our friends hung out in the water with beers.

What's wrong?  Why the sudden disconnect? 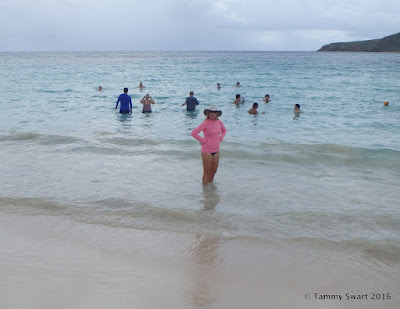 This "Touristy" stuff is just not our thing anymore. 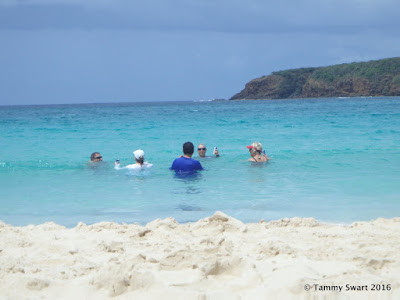 So we watched from the sand as our friends enjoyed the water, and contemplated the hot hike back to the boats.  Sadly... we've become "Beach Snobs".

The hike back seemed much shorter going than it had seemed coming.  We had some clouds that cooled the way and soon we were back to our anchorage again. 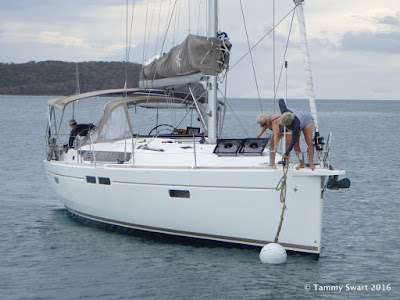 We moved the boats back to the Melones Point anchorage but this time there were no open balls.  We played musical chairs for a bit before we were all settled for the evening.  The sand here is shallow over rock so finding just the right spot is not easy.  Bruce and I got lucky and were able to watch our friends practice their anchoring skills... 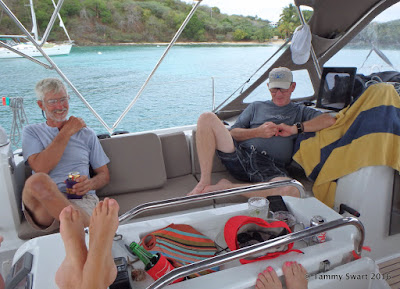 Once settled, we dinghied back over for an enjoyable evening just like old times with lots of laughs and catching up on all of the gossip from home.

We miss our people!!! 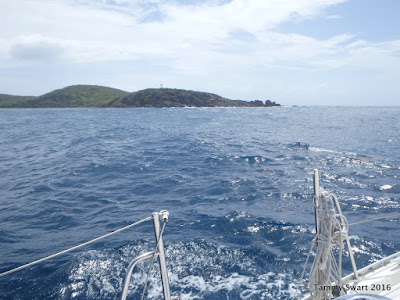 The next morning we listened to the weather report on SSB.  Chris Parker wasn't making me very happy.  He called for big winds and waves... and throw in some rain for good measure.  Dang it!!!  We got under way early headed around the southern side of Culebra to another promise of beautiful beaches... Culebrita.

With the boat leaping and the cat expressing her displeasure... Bruce and I reconsidered our position.  We took a look at the charts and the current wind conditions.  Applying what we've learned thus far... we decided that the entrance to the anchorage on Culebrita must be treacherous with wind and wave against us.  There would probably be a lot of roll in the anchorage itself and the snorkeling conditions couldn't be optimal with the water all churned up as it is...  We decided to bail.

Ultimately each skipper is responsible for his/her own boat and the lives and happiness of the crew.  Although we were near desperate for time with our friends, we had to make the prudent decision.  We couldn't afford to damage our boat and navigating through the many coral heads that guard the Culebrita anchorage was not a good idea in these conditions. 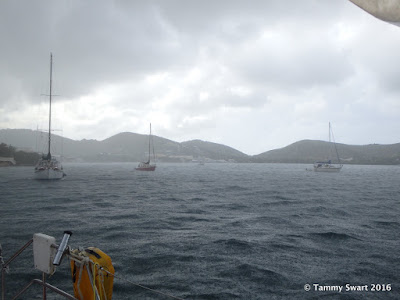 Additionally, we have time.  Time to visit what is promised to be a spectacular anchorage in more favorable conditions.  While our friends are on very limited time and not willing to let a little weather affect their enjoyment of this vacation, we were not.  We had to weigh all of the factors and decided to take the safer route.  We radioed our friends and told them of our decision with heavy hearts.

Then we turned our bow toward the entrance to Ensenada Honda and waved goodbye for now as we watched our friends continue on.

Once we got settled in the protected and familiar anchorage, the skies opened up and poured.  The weather matched our mood... but we were confident in our decision being what was best for us.

So... are we Losers because we can't "hang" with the Charter Crowd?  Some would say yes.  But our days of taking unnecessary chances with our boat... our home... are over.  No matter what we WANT to do... we must make the decision that protects us and our home.

So we waited it out and did a bit of provisioning while our friends enjoyed their time on Culebrita.  We waited patiently for their return so that we could rejoin the fun, hopefully with a better weather forecast.  I would say that makes us Cruisers... not Losers!