Waterlemon Cay was one of our best snorkeling stops ever and we wanted to recreate that day for our guest.

I think we disrupted our JD's morning routine.... Bruce and I were up early sitting in the cockpit when we just decided to take off.  With no preparation at all we started the engine and began motoring the very short hop around the corner.

JD came up from below looking a little bit rough as he blinked us with a WTF look on his face...


We arrived before 7 am and tied up to one of the National Park's free (for day use - there's a charge for overnight) mooring balls as close to Waterlemon Cay as we could get.

By this time we were all ready for breakfast as we watched the colors on the water go from a deep unassuming blue to the vibrant turquoise that comes with the kiss of the sun.


Snorkeling isn't great until the sun is much higher in the sky, so why did we get here so early?  Well, snorkeling might be best done at high noon... but hiking is NOT.

We planned an early (read: cooler) hike up the hillside to the Annaberg Plantation ruins.

I've been up to the ruins before, but Bruce and JD have not.  I enjoyed showing them the way.  This time there was a woman in the Bake House making bread and serving drinks.  She declined to have her photo taken however, which is a shame... because she was very pretty in her period costume. 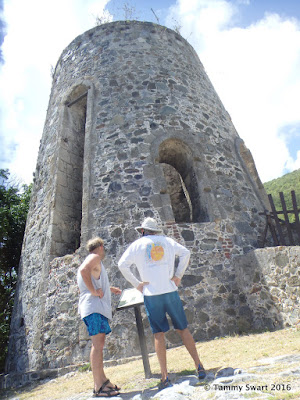 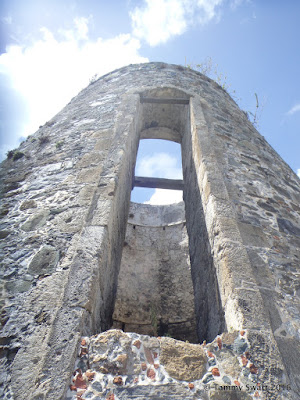 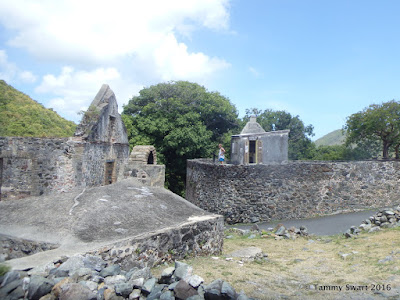 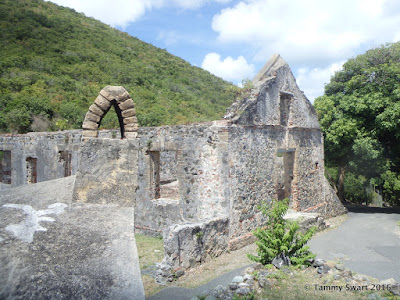 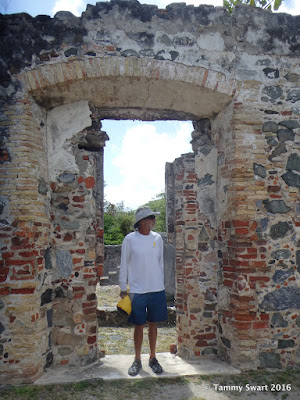 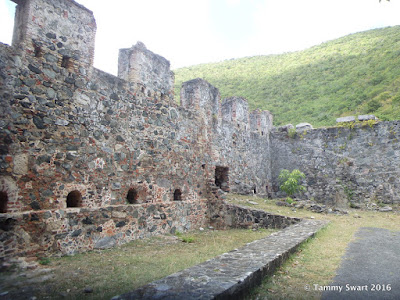 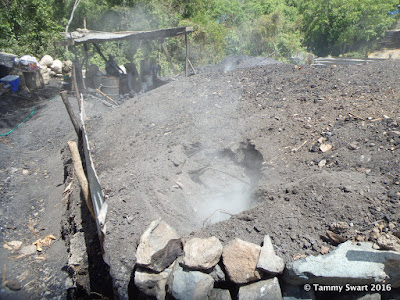 Also different this visit was the charcoal making exhibit.  This was just a pile of dirt last time I was here... today it was smoking and hot.  There were men in the shed behind the pile chopping wood and waiting for the charcoal to be ready for removal from the pile. 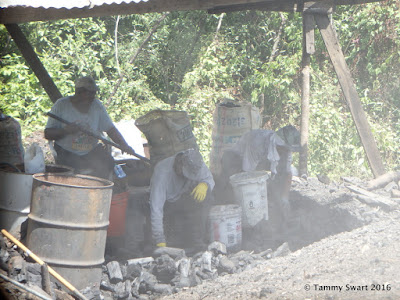 I had no idea that's how charcoal was made... It was a hot job for sure! 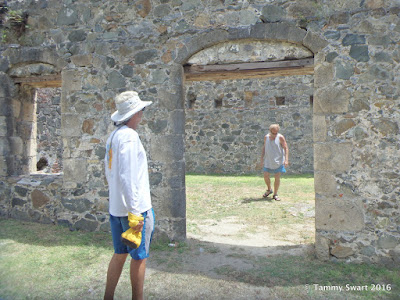 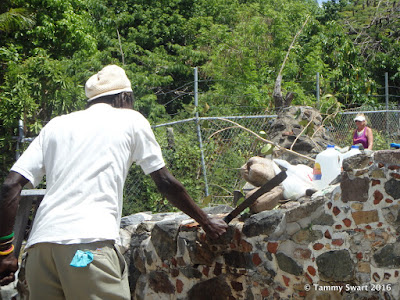 There was also a man dispensing samples of fresh coconut and some local fruits. 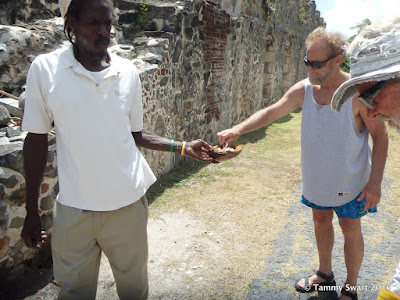 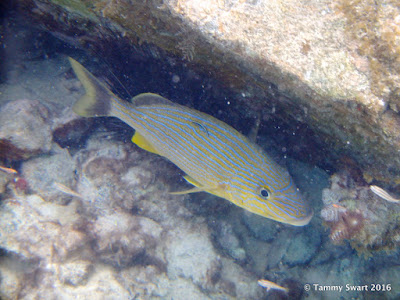 By the time we were done wandering around it was getting really hot... snorkeling beckoned!

I don't know what the difference was between this time and our last visit to Waterlemon cay... but the experience was not quite as vivid this time. 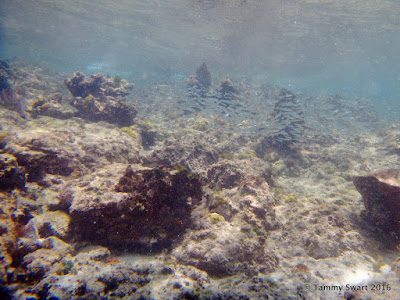 There were no birds feeding on the surface as the fish drove the bait up from below... But it was still a neat place to visit. 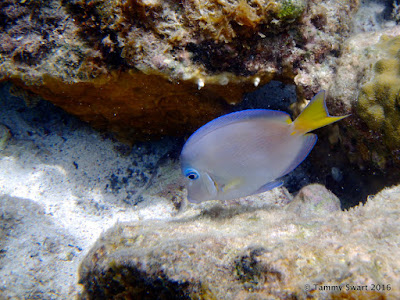 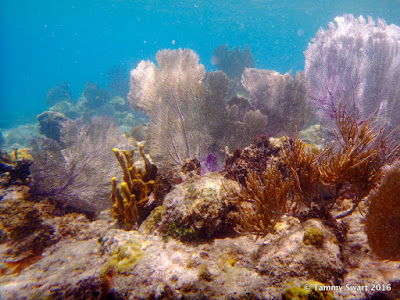 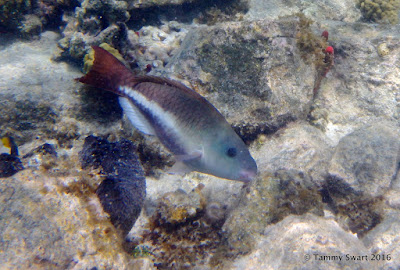 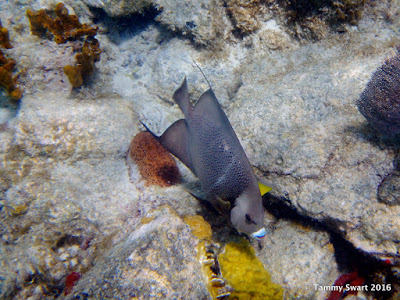 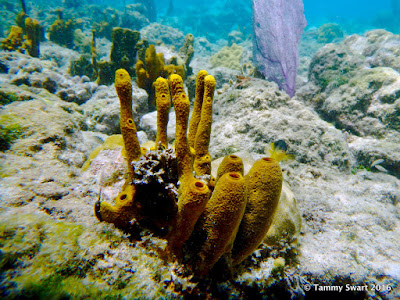 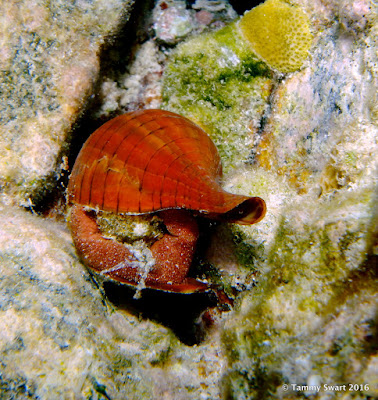 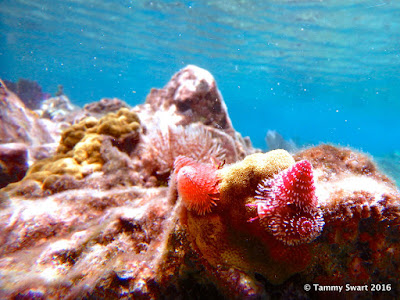 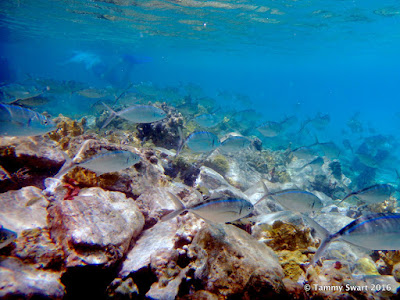 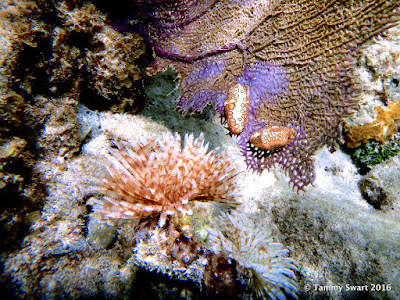 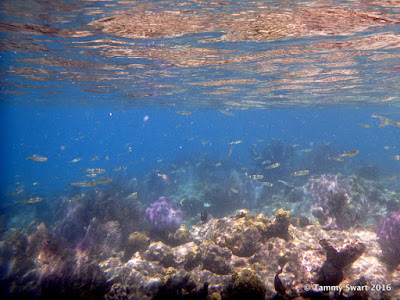 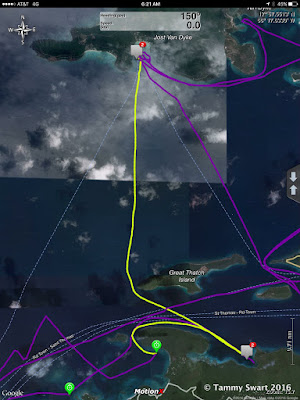 We snorkeled until we got cold and were ready to move on.  It still gives me a kick to just hop aboard, start the engine and in minutes we can be in another country.

This time we cleared into the BVIs at Yost Van Dyke.  It was after 3:30 when we arrived so we had to pay an additional fee of $15... but we had already paid the yearly cruising fee so it was still only about $20 to get our 30 day pass. 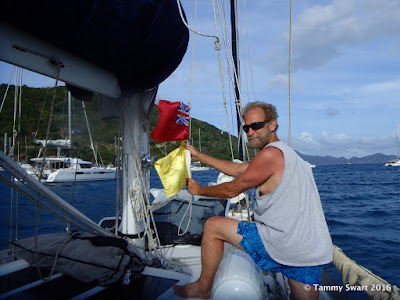 JD was flying out on the 4th of July so that gave him 11 nights to explore.

He went in with me to clear in and then we gave him the honor of taking the yellow quarantine flag down and raising our hand made courtesy flag for the BVIs. 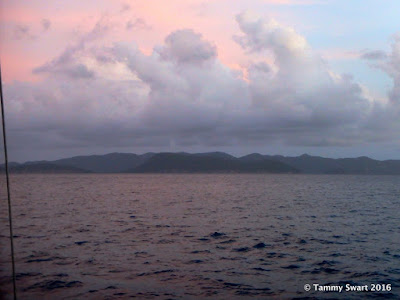 We strolled around the little settlement and visited some tourist shops so that JD could make some purchases, then we settled back on the boat for dinner and a sunset.

It may seem like a lot from a charterer standpoint, but 11 days isn't much to properly "see" these beautiful islands.  But Bruce and I are dedicated to doing our best to show our guest the best of the BVIs, in spite of forecast windy conditions!