An Old Pair Of Shoes

Saying goodbye to our old Yacht Club Buddies yesterday was like taking off a beloved pair of heels...  While you love how they look and how they make you feel when you're wearing them... it feels SO GOOD to take them off and slip into a ratty pair of flip flops.

While we LOVED being with our friends and were sad when they left... we soon slipped back into the comfy life of the Cruiser...

It's like our brains flip a switch.  Like we left one room in our house and walked into another... lights off there, brightness here. 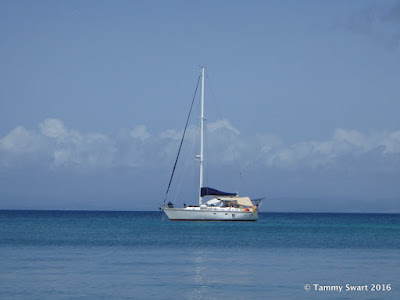 Perhaps we're fickle... but maybe this is just the mind's mechanism for reducing the sadness of a life spent away from friends and family with no definite future.  You learn to live here and now.  And after the mind's initial resistance, you settle into this routine and it feels really, REALLY good!

Chris Parker (Weather Guru) promised a pleasant passage... but not for a couple of days.  Our time here at the Beautiful Green Beach on the Eastern side of Vieques was idyllic. 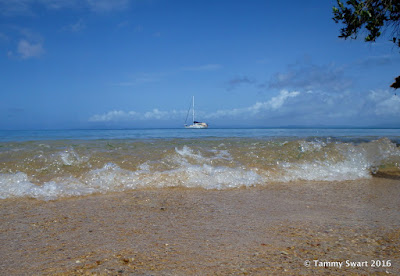 We moved our boat to a less rolly spot near a small cove.  This spot was more central and close to the shore with a bit more protection from the winds that continued to blow all around our little bubble of perfection.

We explored the beaches and collected shells and just luxuriated in this time with absolutely no other thing in the world to do but what we were doing right now... 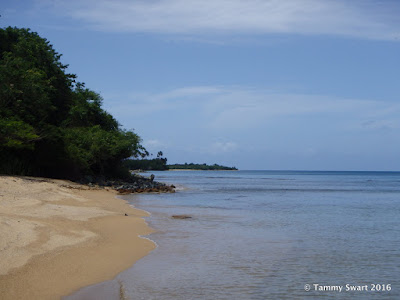 No chores, no place to be...  And there was no place in the world we would rather have been but that beach...

Suddenly my eyes caught a flash out on the water.  I fixed my attention there and watched as the white spot became a sailboat.  Then the sailboat became our friends on ODIN!!!


Yay!  We can finally hang out and get caught up with Cruiser-Talk!  We haven't seen these guys in weeks and last we heard, they were making their way back from somewhere between here and Grenada!

They grew closer and closer... looking like they were going to pass us by.  I waved wildly and jumped up and down conveying our wish that they would anchor as near us as they wished.  (Cruisers sometimes hate it when a boat comes up and drops anchor right next to them... when there's a whole Bay open)  We were eager for the company and they got it.  They dropped close, but not TOO  close. 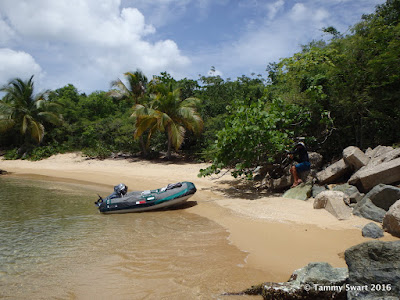 While Odin got settled, we left the beach and moved over to a spot closer to the reef for snorkeling. 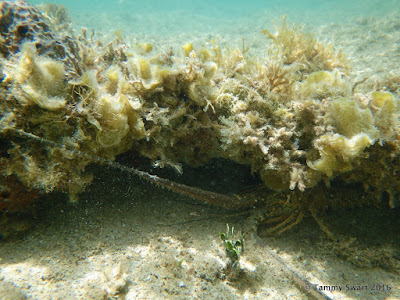 We split up to explore the shallow reef, one of several along this beach, and I couldn't believe my eyes when I spotted a pair of lobster antenna!!!

We have NEVER seen a lobster that wasn't in protected (no take) waters. My mind raced!  This was my chance!  I squealed to get Bruce's attention and waved him over.

He looked where I pointed and I asked him "Should we try to get it???".  We blinked at one another...  I was the one wearing gloves and we didn't have any other way of capturing the beast.  It looked like I would have to grab it. 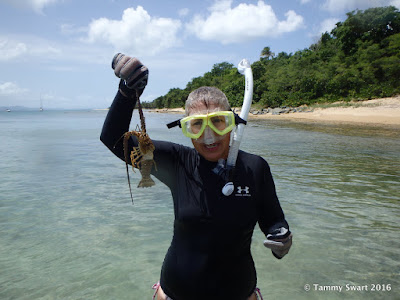 I psyched myself up for it and quickly reached in to grab the lobster, quickly before I changed my mind!

I came out of the water with the thing... triumphant that it had not attacked me...

Only to realize that it had not done so because it was a hollow shell of a lobster... and a small one at that!

It was the molted remains of some lobster that has lived to tell the tale and I'm sure it was hiding somewhere laughing at me right then...

Oh well.  At least I knew that I could conquer my fear of sticking my hand into holes to procure our dinner... but I secretly made a mental note NOT to be the only one wearing gloves when we go snorkeling again....

I threw the thing back into the water and we swam along together to see what else we could find.

I came face-to-face with this guy.  He held his ground, not moving until I was forced to give way. 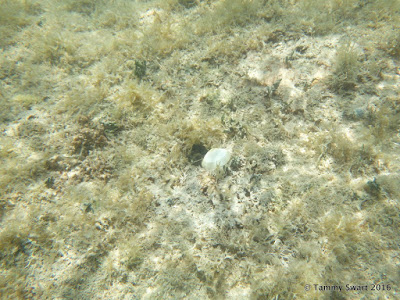 I found a pretty shell and went to reach for it...

Just before I touched it I realized that there was something lurking in the hole next to the shell...

Something that looked fierce and menacing... I snatched my hand back... my newfound bravery in regards to reaching into holes after treasure rapidly dissipating...

I reconsidered my position and decided that I didn't need that shell after all... and quickly swam away.  After taking a few more pictures for proof-of-peril...

I looked up the Lizardfish on the internet later and found that they are known for freezing and holding position in the face of much larger danger... I didn't want to be that ONE person with a story to tell, so I'm glad I let him be. 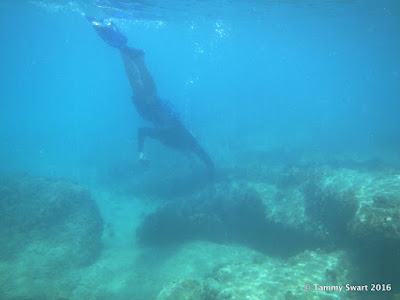 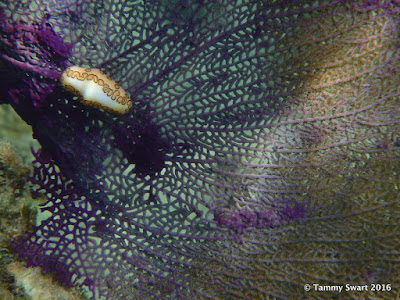 Upon returning back to Dos Libras, we greeted our new neighbors as they splashed by in sync on their way to the snorkel spot.

We arranged to meet up for sundowners and shared our favorite part of the day with a different kind of friends. 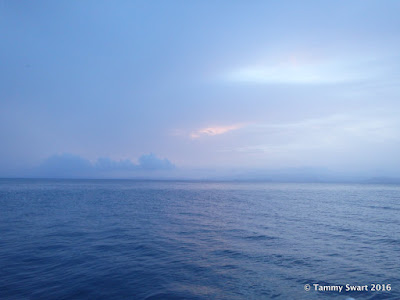 These friends are also figuratively "wearing flip-flops".  They are moving with the weather and not in a hurry.

We shared stories that are of interest only to other Cruisers... We would soon go our separate ways with promises to "see you in the Fall..."

...and it felt as comfortable as an old pair of shoes.