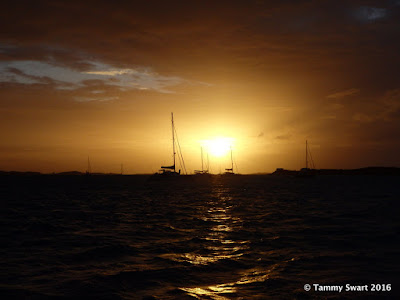 We have been watching the weather for days looking for a perfect time to move on.  Georgetown has been…comfortable, but it’s time to go.  They call this place “Chicken Harbor” because so many sailboats come here with the intent to continue on and never leave.  But we aren’t chicken!!!

As happens so many times with us…we just decided!  After listening to the weather forecast for the week and checking a forecast on my favorite iPad app (Pocket Grib) conditions look right…and the weather says GO!

Bruce and I have spent long hours reading “Gentlemen’s Guide To Passages South” and Virgintino’s Dominican Republic CruisingGuide.  We’ve poured through the Waterway Guide and our Explorer Chart Books… We’ve perused the notes from Active Captain subscribers on the islands in our path.

We think we have a plan… but as plans often go awry (read: weather kicks our butts)… we won’t be sharing too much in advance.  First stop: Long Island to the east, with Thompsons Bay being south of east.

The perfect forecast would be for NNW winds at about 15 knots… It looked like we would get some of that as the winds from a Norther’ that was upon us continue to clock around throughout the day.  Tomorrow the winds would be on our nose… and we’ve had enough of that!  What to do…what to do?

We looked outside and the weather said STAY!  It felt sort of like the calm-before-the-storm with ominous strings of clouds and a few light sprinkles.  I checked the weather again and all sources said that this would pass and we would have a nice day on the water. 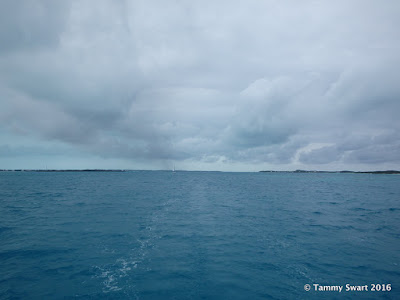 We decided to go for it!  When we said goodbye to Georgetown on the morning net, we were the ONLY boat (admitting to) leaving.  We even took a little heat for it, but we were committed.  Our dinghy came up and off we went.

We raised the main and with engine churning out some speed and energy for making water, we slipped out of the harbour that had been our home for just short of a month.

Once outside in the Exuma Sound, the waves were rolling up beneath our stern, pushing us along with surfing speeds up to the occasional 8 knots.  Unfortunately we couldn’t really see rolling out the jib and messing with the pole for this downwind run, so we continued on happily motor-sailing with the main alone… Sure, we could have shut down the engine but we would not have been able to keep up speed enough to make it to our anchorage before dark. 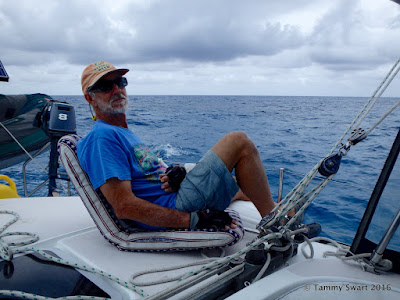 We settled in for the ride, all happy, including Jezabelle.  We moved on down the coast of the Exuma islands and entered the banks.  It was like somebody turned the lights on in the water as we went from the deep-water blue to the brilliant aqua-blue of the banks. 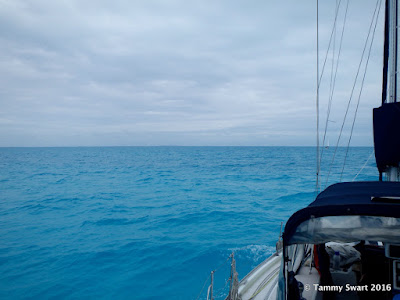 Only a few small coral patches marred the stunning beauty and I was actually kind of glad for the clouds… If there had been full sunshine, the color of the water would have been more than we could hold all at once.

We slowly caught up to and passed several other boats, obviously moving under sail alone.  All afternoon we watched the clouds, menacing at first, but as the day progressed, they became much more benign.  The sun even peeked out a few times and we congratulated ourselves on our decision to go as our gamble paid off.
There were more than a few boats already in the anchorage at Thompsons Bay snuggled up to the NE corner where the water was bathtub flat.  We hadn’t felt the winds much out on the water because we were traveling off the wind, but when we turned up into it to drop the mainsail, we realized that it was blowing at about 15 knots.

That’s enough to kick up a bit of fetch but there was almost none in the anchorage.  We dropped anchor in the “Morgan Section” between Magnolia and Kelley Nicole and watched as they disappeared into town by dinghy.  Too late we realized that there was a happy hour going on ashore…  Guess we’re going to miss this one. 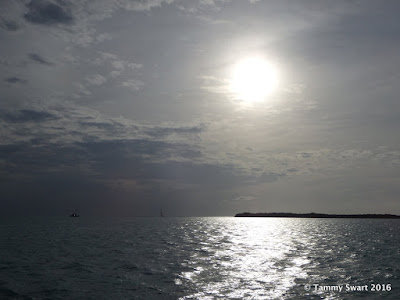 With the boat tidied up and things put away, we sat on the deck with our Sundowners and enjoyed a new sunset view.  It’s difficult to describe this life to you.  In the beginning leaving was kind of a big deal.  Now it’s just a blip…a normal part of life.  No anxiety, no hoopla…just load up the dinghy and go.

Will we feel the same about leaving the Bahamas?  Not sure…  But we are excited about this next part of our lives as we leave the familiar and travel on toward new countries, new customs, and new sights.  It’s good to be going and we’re as ready as we will ever be. 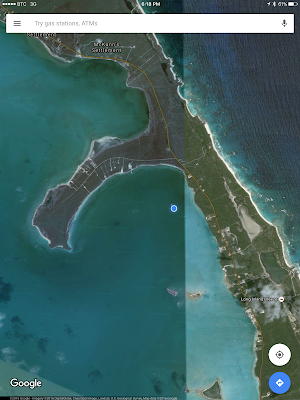