That Thing We Never Do

We did it.  That thing we NEVER do!

No... not THAT thing... get your minds out of the gutter!

We went sailing!!!  Well you ALWAYS go sailing you might say.  But no.  We don't.  We cruise.  We use the boat to get from one place to another.  We pound to windward or we motor because the winds are in opposition of where we want/need to go...  We never just GO SAILING!!!

But today, we did!  We raised sail just after raising the anchor while still in the harbour.  We slowly sailed through the harbour with the engine OFF!!! 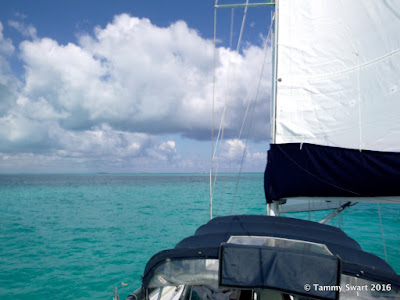 We were only making 2.5 knots but who cares!!!  We don't have anywhere to go and almost all day to get there...

We left our anchorage at near high tide so we were able to sail right over the shallow sand bars that reach out into the harbour.  We might have to take a slightly different route coming back when we will be closer to low tide. 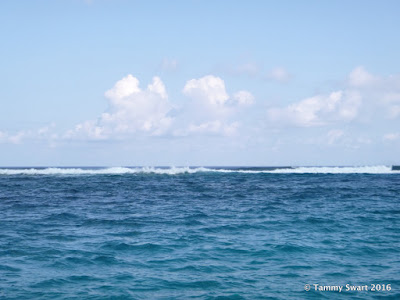 There were some swells coming in from the entrance.  It seems like there always are...  Waves were breaking over the reef and we almost had second thoughts.

Why are there still such big waves out there on such a light wind day??? 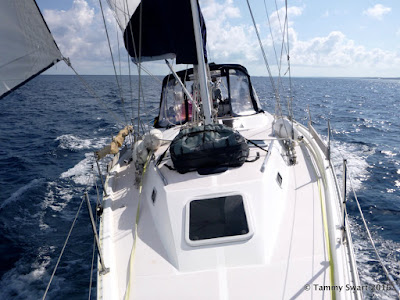 But we continued on out through the gap and fell off with a lovely wind on the beam less than 10 knots. 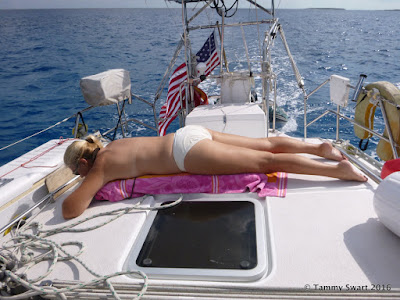 I handed over the helm to Bruce and took my position on the aft deck for some sunbathing.

It was lovely.  The breeze was cool enough to counter the heat of the sun to perfection.

I lie there and let my mind wander.  Now-a-days there are only GOOD places for my thoughts to go! 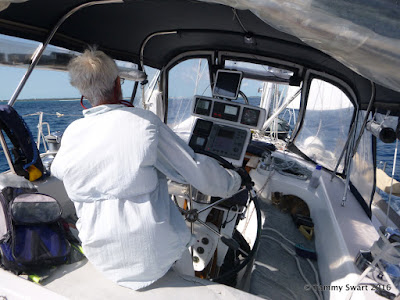 While I lay drowsing, Bruce was in his element at the helm.

He trimmed the sails and with a slight increase in wind to about 11-12 knots, he was able to coax the boat into producing speeds in excess of six knots!

Then he turned off the autopilot and steered by hand.  Another thing we almost never do!

At one point he started to sing!  It was nice listening to him.  It was nice to see how happy sailing made him.  We should do this more often... 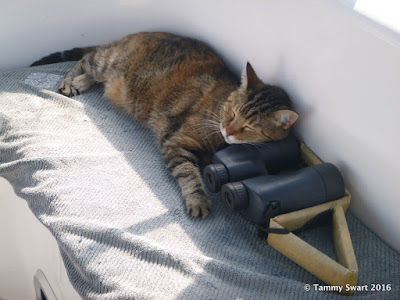 Even Jezabelle was happy!  The boat was rolling along with a very gentle motion and she just dozed in the cockpit.

This is the life.  We sailed on down the coast enjoying the offshore wind. 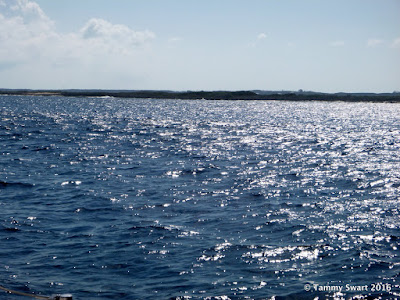 There were still long swells coming from the Exuma Sound that would gently lift the boat and then delicately guide her back down again.  I tried to capture them for you but the picture does not show the depth of field.

They were sparkly and awesome.

We sailed out for a while, then made one tack... Jezabelle remembers how to tack... she hopped to the cockpit and then took up her position on the other side. 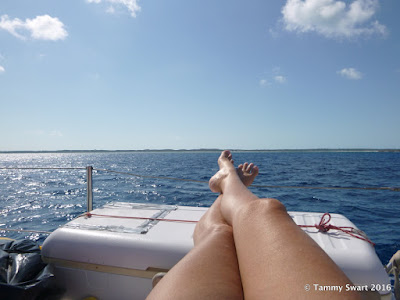 Repositioning my chair was the biggest problem I had...

I didn't want it to end.

But we had an appointment in the afternoon that we did not want to miss... 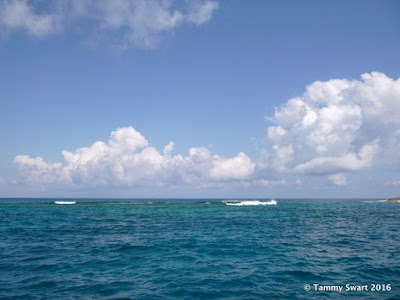 So we wove our way back into the entrance to the Harbour, past the breaking waves and avoiding the reef and shallows.


When the swells decreased, we rolled the jib and Bruce went to the bow to watch for coral and read the water for shallows. 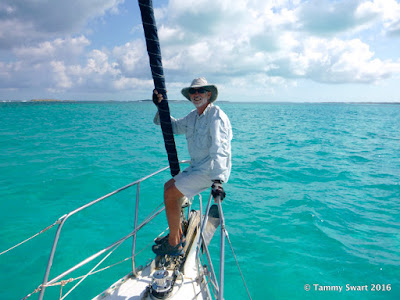 Bruce was a happy man.

The views here never cease to invoke feelings of awe as they are ever changing.  The clouds moved through causing stark lines between shadow and glowing green colors across the spectrum. 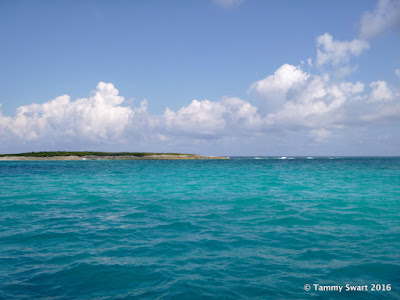 As we neared our new anchorage we dropped the mainsail and motored the half mile to our spot near Hamburger Beach.

There's going to be a party there this afternoon and we want to be close.  The fun just never stops!!! 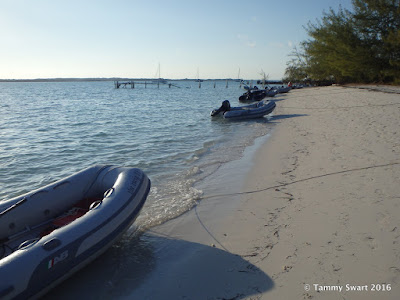 After tidying the boat up and having a late lunch, we rested for a bit then prepared our appetizer offering for the group and took off for the beach! 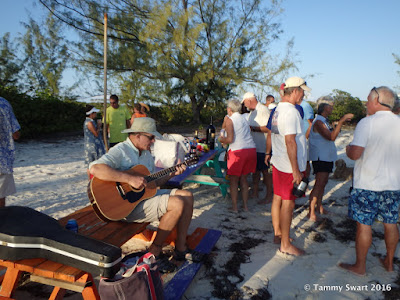 We spent the hours until sundown meeting new people and chatting with friends. 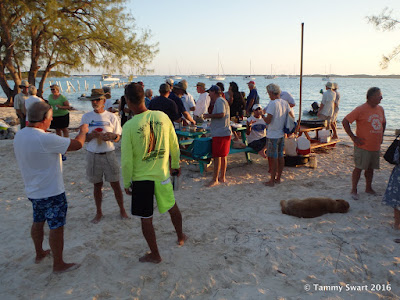 There's always something to talk about amongst other cruisers.  It's fun to meet people from all over the world... 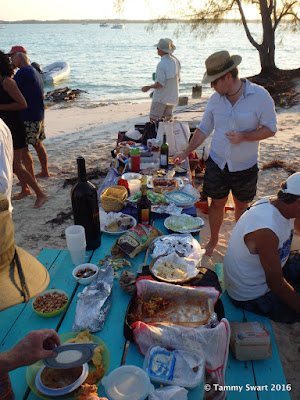 And then there's the food...  People really go all out and bring yummies to these things.

It was the perfect ending to our truly wonderful day.  Cruising life is good!

The sun set on our little party and the mozzies came out in great clouds to drive us all to our dinghies...  Cruisers disappeared like magic. 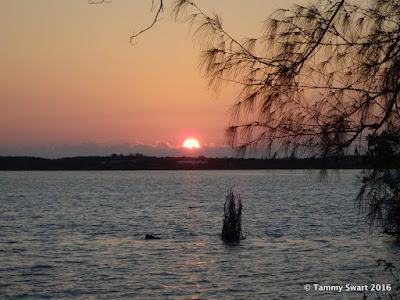 Thinking back on our day, I don't know why so much time has passed since we started cruising back in 2013 without taking a pleasure sail.

It really wasn't all that difficult to get the boat ready.  We don't have a lot of stuff to stow, we didn't even lift the dinghy...

Maybe it's the fact that we're always moving and when the winds are kind we take advantage of it to get somewhere...

Whatever the excuse, we vow not to let so much time go by again before we take another pleasure sail... it was just that awesome and totally recharged our mental batteries.