Georgetown By The New Year 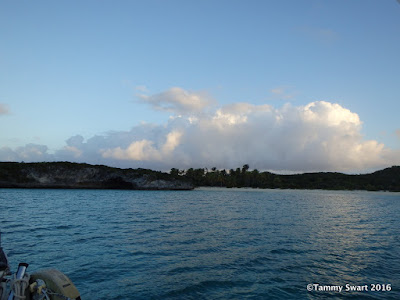 When we went to bed last night we could hear far off fireworks, boommm, phopppp, whomp... like in slow motion.  Neither of us could muster the energy to get up and go look outside...  I wish I had.  And so our new year began.

We thought that we would be staying at Rudder Cay another day with the dangling carrot of northwest winds appearing in our forecast one day away.  Visions of a fabulous day scooting down the coast under sail power alone danced in our dreams.  When morning came... we relaxed and made no move to go.

Until 6:30 when I got my weather report.  Chris Parker wasn't on the SSB this morning.  He took the holiday off.  But I still have my iPad and Pocket Grib, that is usually pretty good at matching or beating Chris' forecast... So what does the oracle say?  WHAT???  No northwest wind!!!  And not only that, it's going to go dead on the nose tomorrow??? 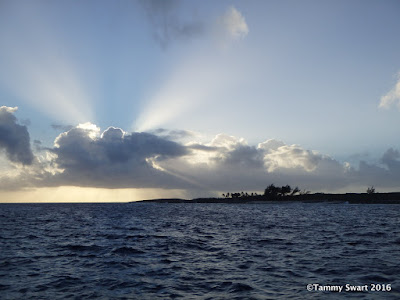 We're moving!  Today the winds are forecast to be about 15 knots ESE and decreasing with possible slide more east.  That would be better than waiting until tomorrow when we KNOW we will have to just motor into the wind.  At least there's a CHANCE of sort of sailing today.  We radioed Mañana and shared our plans... then began to ready the boat. We would leave at first light.

We were raising the mainsail and motoring out through Rudder Cay Cut just after sunrise. 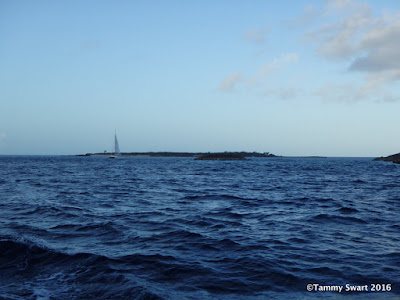 Rudder Cay Cut can be a tricky one. If there is opposing wind and current a nasty wall of waves can occur.  It makes the ride out through the cut quite dicey but this morning we had light ESE winds and low tide was about half an hour ago.  It should be pretty much slack so we weren't concerned.  We breezed right out into the naturally building waves outside the cut with Mañana right behind us. 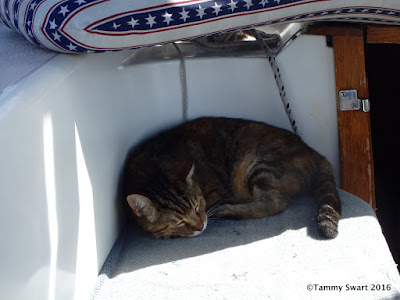 There's always a period of really crazy water just outside any cut or channel.  I guess the waves stack up when they encounter the shallow water near land and then the forces of incoming or outgoing tide through the cut make their presence known.  Poor Jezabelle felt the forces alright.  She was instantly sick but then, as usual... settled back down in he spot for the duration. 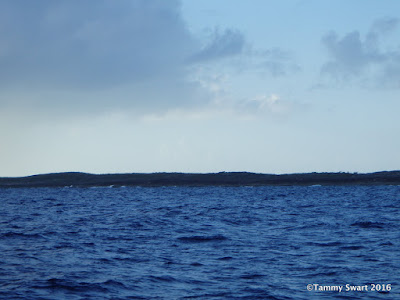 Before long we found our groove with the engine on and a reefed mainsail sheeted in tight.  The wind was just a bit too far south for us to sail, but the main kept the wave action comfortable.  We had seas of about 2 to 3 feet with an occasional big one, but unlike our last few trips, the waves were big gentle swells and spaced far enough apart that when we caught two or three in a row, they didn't stop the forward motion of the boat.  It was actually kind of fun, like a roller coaster!  We just sat back and watched the parade of islands slide by... 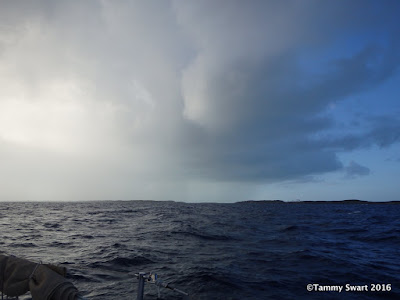 I had my eye on a building black cloud up ahead.  It looked like we might be lucky and it would pass to starboard, but there is a point when you can see the rain on the water up ahead... We knew it was going to get us, if only for a little bit... 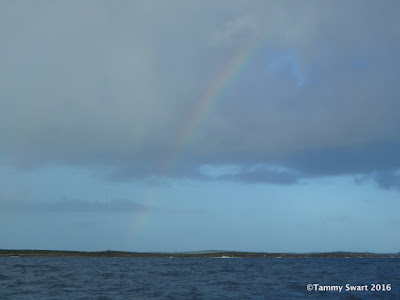 And then it was gone and we got rainbows!!!  It always makes me feel optimistic when we see a rainbow... like a stamp of approval upon whatever we are doing.

We could no longer see our friends on Mañana as they had tacked way out instead of motorsailing.  We hoped they were doing fine, but since the rain just barely touched us, they probably got nothing.


We continued on our way and the winds flirted with a more easterly direction... Our speed improved to a solid 5-5.2, up from the mid four knot range.  But we were comfortable and relaxing and just taking it all in.

Our plans are constantly changing out here.  Just don't even ask me what they are because by the time they escape my lips, they're already changed...  We had planned to stop in at Adderley Cut and do some hiking on Lee Stocking Island, maybe spend a day.  I wanted to be able to say I had hiked to Perry Point, the highest elevation point in the Exumas at a whopping 123 ft.

But the winds say go, and so we go.  Gotta save some things to do for next time we're in the neighborhood... 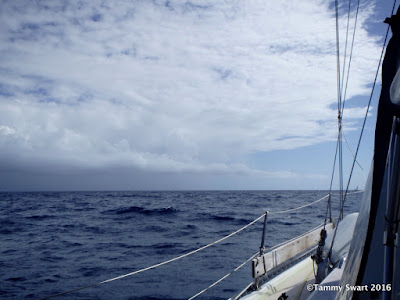 We were almost there when a bank of clouds I had been watching offshore began to almost resemble those anvils we hear so much about.  What is it they say?  That when the anvil falls it's trouble?  Well I wasn't sure that's what I was seeing in this sort of disorganized pile of clouds... but I kept a close eye on it anyway.


We were just looking at the crazy cloud behind us, nary a drop of rain touched our skin... when we got a very strange blast of wind.  The anemometer only registered 19 knots but we know how 19 knots feels.. and this was MORE!  I think it was a down draft and maybe since the wind instrument reads horizontal wind, it was having trouble reading the correct wind speed.  Anyway, the waves began to hop and chop but with a double reef in the main, we were OK.  It was just a short period of strange and it was soon over... 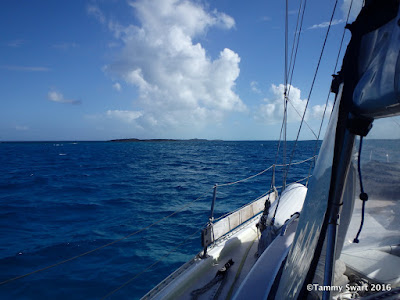 And up ahead, we could see the monument atop of monument hill... our home for the night. 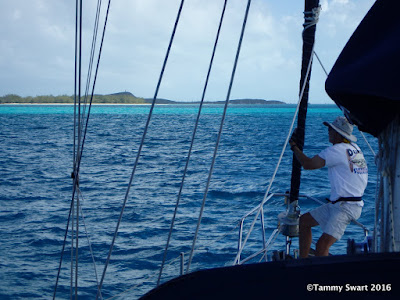 The depths began to shallow and the waters started to show their colors as we made a B-line towards the entrance to Elizabeth Harbour.  Just in case, Bruce manned his station at the bow to spot coral... we were going to take the shallow water/high tide route in.

The intermittent clouds passing overhead made reading the water a challenge... but we were following the recommended path inside so it should be fine... but you never know. 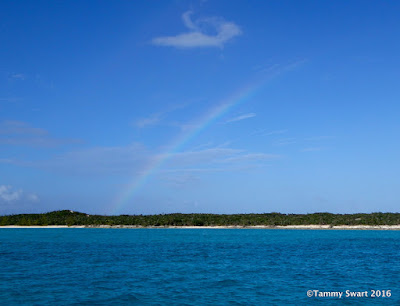 There are some sand bars stretching across this route but with our arrival being right at high tide, we should be fine.  I will say that there were a couple of spots where we would NOT have been fine if we didn't have the extra 2.6 ft of water... They MEAN it when they say this is the high tide route.

We picked a spot way out between Flip Flop beach and Monument Beach.  The last time we were here, we dropped anchor near the more popular Volleyball beach and never moved.  We won't be doing that this time.

The water was beautiful here and we were a good distance from any other anchored boats.  And oh look... a rainbow!  I guess this IS our spot!

We straightened things up, washed down the boat (after a brief shower that didn't amount to much) and were dropping the dinghy into the water when Mañana arrived.  Hooray!  They decided to come to GT after all!  Very soon they were hailing us on the VHF with a surprise invitation to dinner!  YES!  We would LOVE to come for dinner! 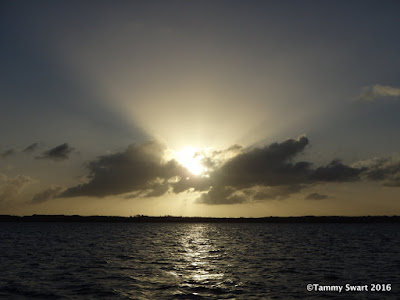 We enjoyed our evening laughing with new friends.  It's funny how the universe matches you up with likable people by mere chance.  We met Tom and Andrea back in Miami as we were both waiting for a crossing.  Now we keep "bumping into them" here and there and it's great having new friends to share information and experiences. 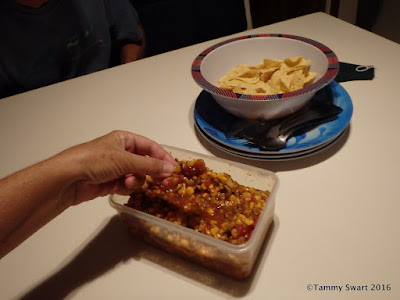 And so the new year begins.  We made it to Georgetown on New Year's Day.  This is the jump off point for all of the adventures to come and we can't be more excited.  All omens say we're doing what we're supposed to be... but just to be sure...  Black Eyed Peas for luck!

Tom and Andrea asked us why the Black Eyed Peas... Well, I don't know!!!  It's just what you DO on New Year's Day.  It must be a "Southern Thing"... but all I know is that if you want luck and to live a happy life... you must eat them on this day.  I don't know how Tom and Andrea have been doing it thus far, but we know we're all off to a good start, here in Georgetown!