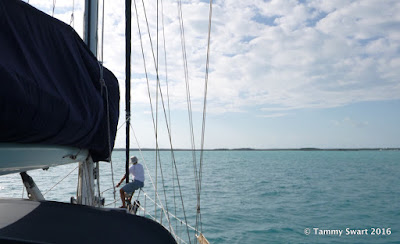 There’s some “weather” coming soon… so what’s new?  To break the cycle and mix it up a bit and instead of shuffling back to the other side of Elizabeth Harbour, we are taking a chance on the anchorage at Redshanks.

What’s a Redshanks?  Yeah, I don’t know either… but we’re going to find out.  We never even considered moving to this reportedly well-protected anchorage during our last visit to Georgetown as it is charted to be very shallow.  Since our understanding of charts and tides has grown, we feel more confident in using the tide to allow us into waters we were afraid to enter before.

Just after the morning net, the tide would be on the rise and near high level at 3.4 ft.  We raised anchor and motored very slowly through the sleepy harbour. We went slowly so that we would reach the shallow waters at the highest point in the tide cycle, AND so that we could make some water on the way.  Did I mention that we LOVE having a watermaker!

Following the deeper water on chart, we made the turn toward the anchorage with Bruce on the bow watching for shallows or rocks.  He is very good at judging the water depth.  There was no need though as we were able to reach the “second hole” easily.  We could have advanced further into the third hole but it looked full of catamarans so we stopped short.  We have nothing against catamarans… it’s just that they move differently at anchor.  With the big winds expected, we wanted to be clear of other boats.

This hole is charted to have a deeper area in the middle, 9 or 9.5 ft.  We dropped our anchor at the southernmost rim of the deeper area and prepared to set it.  The anchor just slipped right along the bottom… WHAT??  But as the boat continued to move backwards, I realized why this happened.  That deeper spot that was supposed to be 9 ft… was over 40 ft!!!!  You can actually see the deeper waters of a “mini blue hole” in the pictures and as time went on, I came to realize that there is often evidence of some sort of eddy or current swirling in the hole that can be seen on the water’s surface.  Strange…

So we repositioned our anchor jut to the east a bit in about 14-17 ft. and the anchor set right away.  We relaxed and looked around at our new neighborhood.  I like it!  It’s still part of Elizabeth Harbour but it’s more like being somewhere else.  It satisfies our need to move.  And it’s completely surrounded so that the big winds from all directions that are forecast will hardly disturb us.

Well, that’s enough relaxing… Our early departure from the other anchorage meant that we hadn’t done our morning routine stuff…  We got busy doing all of those things, and with the addition of plentiful water, it seemed like a great time to deep-clean the catbox.

We are using washable pellets and it was time to wash them.  I set up my operations in the aft shower stall and proceeded to wash copious amounts of water and vinegar through the pellets. While draining the bathtub I noticed a sound that I hadn’t heard before.  It sounded like water splashing somewhere it shouldn’t… like beneath the tub or behind the shower wall.  After a very quick investigation Bruce yelled, “STOP!!! Turn it off!!!”.

Yep, water was coming out of the shower pump and pouring into the bilge inside our engine room.  Whatever WAS on our agenda for the day got shifted to the bottom of the Boat-Project-Quicksand and repairing the pump rose to the top.

Long-story-short (you’re welcome) we ended up replacing the pump with our spare, but not before pulling a giant hairball out of the old one and breaking the ring that connects the two parts of the pump together by overtightning to stop the leak… Guess the old pump was actually broken anyway… Thank goodness for SPARES!!!! 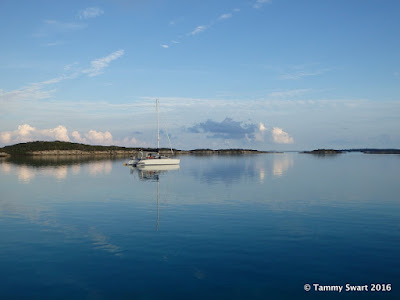 Once our work was done, the rest of the evening was ours to enjoy.  When we poked our heads back up from the cabin we found the wind had almost died leaving the water dead calm… A few ripples disturbed the water’s surface but only a few. 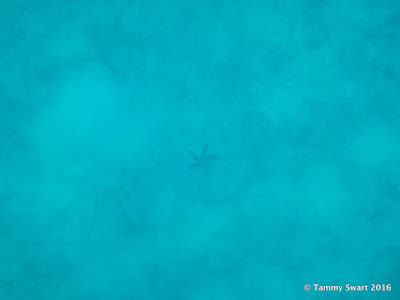 Walking the decks, we peered down into the water and could see the bottom undisturbed.  There were a couple of starfish and a sea cucumber beneath us. 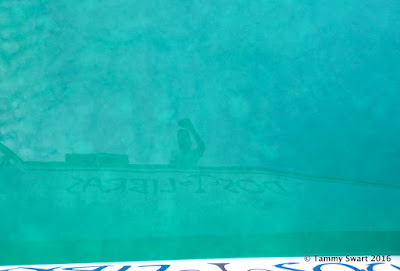 The high layer of cloud puffs was reflected on the water with a translucent effect… our world looked surreal.  We ended our day in the usual way… beverage in hand, in a chair on the deck, watching the sunset in our new neighborhood. 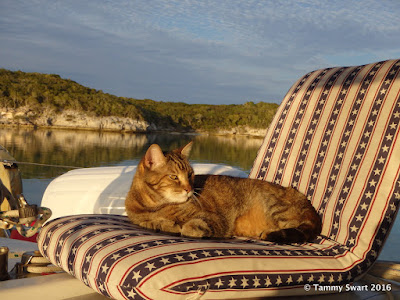 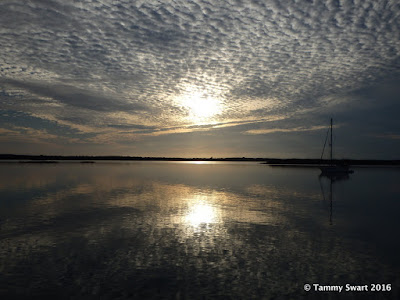