We got here, we made it to a safe place before the norther… NOW WHAT???  Weather has played a huge role in our experience these last few days.  Even though there has been beauty all around us, and we’ve stopped at places we didn’t get to during our first season here… we never even splashed the dinghy!

Rose Island is not a big “hot spot”.  It has one little restaurant/bar, Sandy Toes… that operates on a somewhat irregular schedule.  There were two boats in our anchorage and we saw only a couple of other small speedboats in the three days we were here… but it didn’t look like Sandy Toes was jumpin’.  So, we just stayed onboard and pretended that this blast of north wind, which brought temps plummeting into the low 70’s… was all the winter we would get.

My vow of “Never Winter” does not come without cost… I guess it’s written deep in the pages of our souls that when this time of year comes around… we start longing for the changes the cold weather brings.  We shake out those coats, jackets and sweaters… dust off our boots and pull up our warmfuzzysocks.  We snuggle down into a pile of comforters and pillows with a steaming cup of hot something and breathe in the scented steam as it rises from our warm hands.

The house fills with smells of all of the wonderful things from the kitchen… A big pot of homemade chili… Pinto beans with ham and cornbread… Beef stew… Homemade soups made from anything and everything.  Bowls of the warming liquid flowing down into waiting tummies and turning smiles upward with an Uummmmm…….

These things I miss.

So… with temperatures reaching almost 70°, I cooked.  In the two full days we were bounced around by blasts from the north, our boat smelled like winter.  We had slow-cooked-oatmeal each morning for breakfast.  For our lunches I made a decadent broccoli soup… And for dinners… Bruce made a big pot of ham and beans.  And I produced a pot of chili that was to-die-for!

Thankfully that meant there were ample leftovers to be eaten at the end of our next two travel days… I wanted to get further south.  I wanted to be beyond the reach of all but the most determined cold front.  Our Weather Guru forecasted brisk winds from the east following the cold front, which would then continue to clock around to the SE. 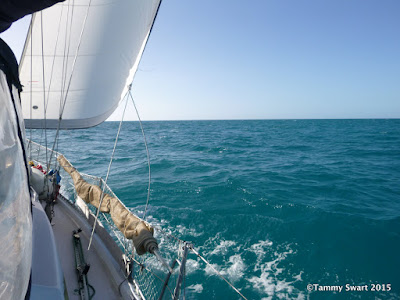 Looking at the charts, we knew that if we wanted to have any hope of actually sailing… we had better take advantage of the east winds.  So after three nights, we left the protected waters of Rose Island as the east winds filled in.  As soon as the sun was high enough that we could begin to see into the water, we took off.

I had reviewed all of the possible destinations and had chosen none.  We would go until mid afternoon then look for a spot to drop the anchor.  We would be passing by some great stops, but we can always come back and explore these when the winds are not so frisky.

Things started off so well… We raised the main, rolled out the jib and with winds in the 15-17 knot range gusting to 20, we sailed.  The waves hadn’t had a chance to heap up yet and we had a blast.  But… then they did.


We began to have larger and larger waves on the nose and to make things worse, the winds speeds climbed to the 19-23 range and were inching around more southerly on us as well.  Our good speeds dwindled until we finally admitted defeat.  If we want to get anywhere we’ll have to motorsail…

The sails keep us driving forward as we crack off the wind just enough to get them working.  The engine gives us the power we need to recover from the relentless boxy waves.  Again and again, we would just get going and another set of two to four big waves would appear out of nowhere to bash our bow. 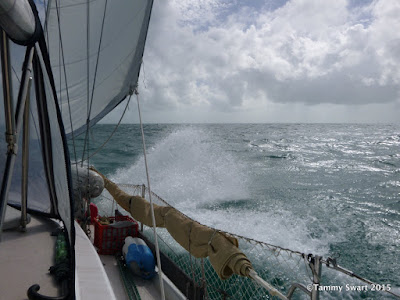 Huge sprays of white water would leap high and slap the windows of our enclosure.  Rivers would run down the decks and cascade of the gunwales. 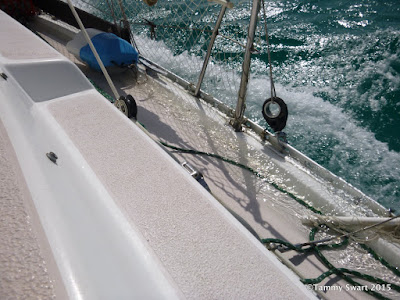 Our attitudes remained good in spite of the beating mother nature doled out to us.  No matter what… we’re in the Bahamas! 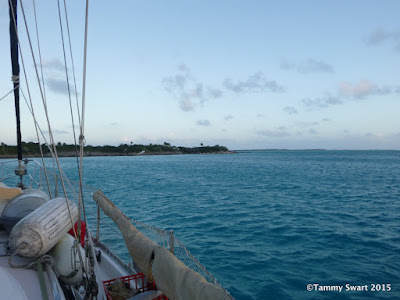 We got serious about finding a stop for the night at about 4 pm.  There were mooring balls at several places and we could hear other sailors discussing their plans on the VHF.  We didn’t really want to have to compete for a mooring and really for just an overnight stop, we wanted to just drop the anchor somewhere.

The wind chose our spot for us.  We could either drop the main and slog toward land to one of the popular spots, or we could just keep running with the wind making good speed and pick a place.  We did that.  Our trajectory brought us close to Elbow Cay, which offered meager protection from the north, but the winds for us were ESE.  Just beyond Elbow Cay was a tiny little place called Little Pigeon Cay

There were no anchorages marked on the charts there but as we pulled up to it, the glowing flat waters and wind shadow from this small hump of land looked just fine to us.  We motored around to check depths and conditions, then came back to our initial spot and set the anchor.  We had made almost 46 nautical miles.

A check of the boat found our three full jerry jugs of diesel fuel gone.  They had been tied to the starboard side toe rail and now the rope tie was worn through and there was a gaping hole in the lifeline netting where they had made their escape.  I can’t believe that we didn’t see them go.  Must have been one of those huge waves with the white water masking their departure.  Oh well… Merry Christmas to whomever finds them floating out there on the bank… 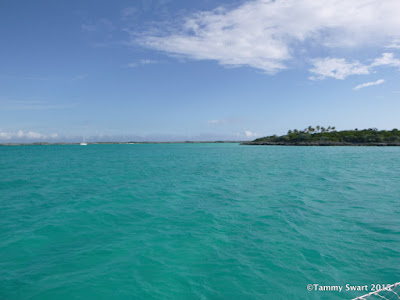 Nothing delayed us from getting an early start in the morning, so with the sun beginning her daily climb, we took off again.  I wanted to get to Staniel Cay, or at least Big Majors Spot (the pig beach).  There we could get data for the iPad and have access to groceries and restaurants should we wish.  There would be snorkeling, the pigs and walks on the island to entertain us, but more importantly, fine protection from the east and SE until the winds let up a bit.

Our hopes for more favorable conditions today were just silly… We were in for more of the same bashing and slogging.  But, it would not be as long.  We had less than 30 miles to go today.  No need to roll out a jib.  The winds were further south and our course took us right into it.


We tried just motoring along our rhumb line at first, but our speeds were dismal.  Even though our new mainsail improves our ability to point (which means to sail closer to the wind to make our rhumb line), it wasn’t enough.  We’ve learned that in these conditions we can motorsail with just a reefed mainsail, just off the wind and get speed and stability while making better VMG (velocity made good) toward our mark.  The ride is faster and more comfortable for us.

Our plan for not being thrashed also means that we needed to try to avoid the huge waves.  I figured that the many sand bores (shifting sand bars that stretch out from the islands to the west) would have a dampening effect, so staying close to them could mean smaller waves.  In order to take advantage of this we would be making many short tacks toward land behind the bores, then following them back out until we reached the deeper water… then tacking back to the next sand bore and repeat.

It sounds dreary but it actually made the day kind of fun.  Tacking was easy with only a reefed main to contend with.  We would sail right up until the depths began to drop.  We could see the bright blue water of the shallow sand bore as we neared… then I would tell Bruce to be ready… and HELM’s OVER!!!

We tacked back out running along the lee of the bore where the waves were indeed, smaller.  We could really tell when we reached the end of the bore as the waves got big and rowdy!  I used the Garmin app on the iPad to pick my spots to tack back in.  It was like a game and quite fun!

All afternoon we tacked in and out.  The best part was realizing that our Ship’s Cat, Jezabelle had this tacking thing down.  With only the reefed main, our heel wasn’t too bad.  She found that if she sat forward on the settee on the high side, she wouldn’t be splashed by the waves, but she could still sleep comfortably with minimal heel.

Whenever I called for a tack, she would rouse, and in mid tack when the boat leveled out she would hop into the cockpit floor and up onto the opposite side, where she would settle again and continue snoozing… until we tacked again!  I watched in amazement as she did this again and again! 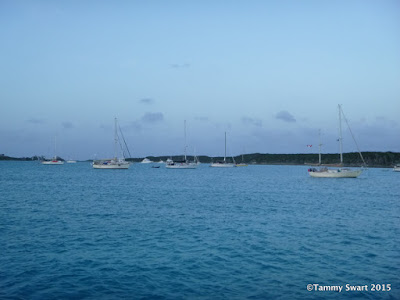 And so our day was until once again, the sun began her downward track.  We tacked all the way to Big Majors Spot.  We dropped sail just outside and motored the last half mile or less into the beautiful and familiar anchorage we would call home for some days.  Happy to have wonderful leftovers for a warm meal and happy to be here.  Sometimes the best part of sailing is when you stop… 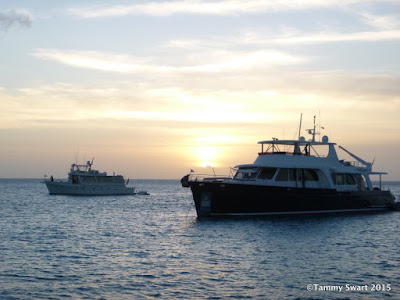 Sitting on the deck as the sun set behind the huge yacht, one of several neighbors here at Big Majors… I realized that this anchorage is full of big boats with large families aboard. 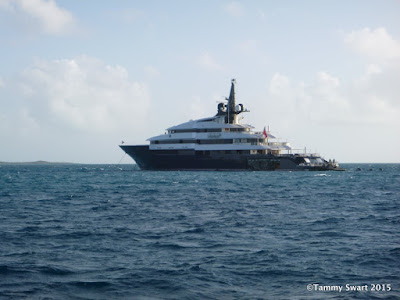 They are escaping winter too, but only for a short time.  They have to go home.  We are home and it is nice. 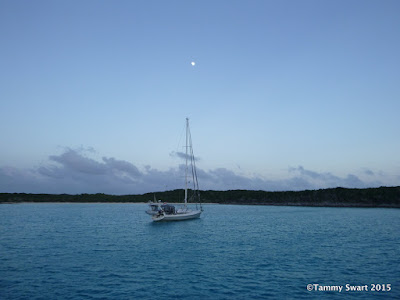 The weather in the Bahamas at this time of year isn’t perfect.  But with the expectation that temperatures will remain above the high 60’s at LEAST… even though the winds may blow… it is never really winter.