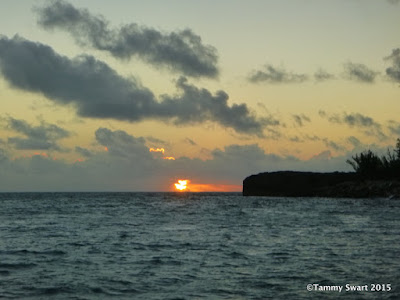 This is the second time we’ve transited this body of water and both times we have been unpleasantly surprised at the wave action we’ve encountered.  It seems like there are two bodies of water that converge at the approach to New Providence Island causing short intervals and confused waves.  Big ones. 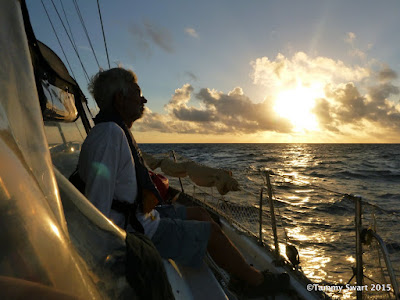 We opted to leave Morgans Bluff, even though we would have loved to stay and take a car tour of Andros Island.  Sunup saw us motoring out the entrance channel with the mainsail already up.  We expected southerly winds and a hard-to-weather day, but hoped we would be able to sail it again. 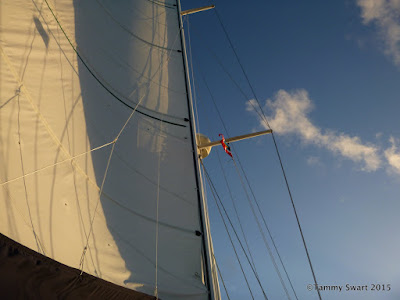 It was not to be.  The big waves, forecast to be 2-3 ft were more like 3-5 ft with some larger than that.  There would be a nice lull during which we would kind of bounce along the waves, then a huge one would build in front of us, and it was usually followed shortly by two to three more big ones.  Often that second or third one hit us square in the face causing waves to rush along the sides of our deck and cascade over the gunnels.  If there was a fourth wave, it usually caused us to come almost to a standstill.  I think that if we hadn’t had the motor running we would have been knocked fully backwards and not just flung to port. 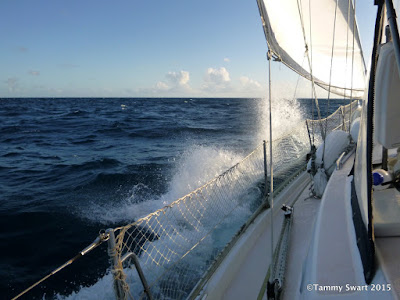 Bruce and I tried everything we could to get a little more speed.  We started with a reefed jib and full main, then switched to full jib and reefed main.  The winds were 17-21 early on, then moderated to 14-17 with a few higher gusts. Unfortunately it never clocked enough to the south to give us an easy shot.  By 10 am we felt as if we had been on the water for hours and hours.

It wasn’t bad, merely the opposite of fun.  We were never in any sort of danger and it really wasn’t even al that uncomfortable.  It was more a frustration that we could not make better time.  The lack of cat vomit attests to this and we were both so proud of our fur baby for her perseverance all this hard pounding day.

We vacillated between running for Rose Island or sticking with our original plan of tucking into Goodmans Bay for the night.  A review of the weather forecast showed that Goodmans would be the far better choice with brisk south winds expected.  This also considerably shortened our time on the water and ensured an easy entrance in good light.  It’s time to start considering that now that we’re reaching the banks.

The conditions eventually HAD to moderate as we neared the northern shore of New Providence.  The waves could not jump over the land, and at about the six mile mark, we saw a lessening of the wave height.  This was evidenced by Jezabelle’s revitalization.  She left her post and started begging for food loudly.  We were happy to give it to her for being such a good sport all day. 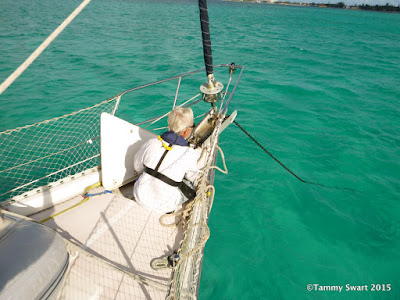 We dropped the sails at that point and motored the last 5-6 miles to our anchorage for the night.  The water was gorgeous all around us and we could see the big buildings in Nassau and Paradise Island off to our left.  We anchored in sand and stuck good with a bit of a breeze still reaching us.  We were probably still close to a mile from the beach… or maybe it was more like 3/4 of a mile.  Anyway, we were one of three boats using this spot as protection from the winds which eventually did go south. 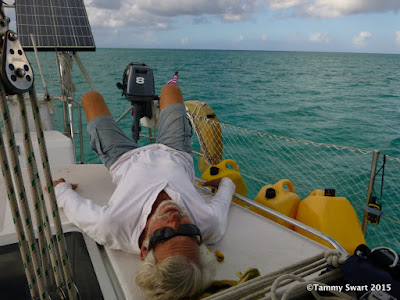 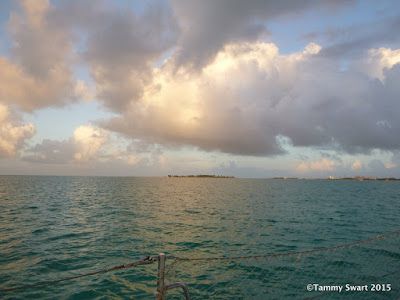 I made dinner as soon as we finished anchoring.  We had not eaten properly all day and were both starving.  After dinner we sat on the back deck and enjoyed life.  If we had to come up with a complaint, it would be the dozen or so black flies that have made their homes inside our boat.  I don’t know how they find us out here… but they do. 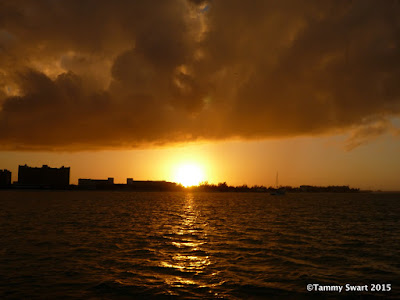 We enjoyed the setting sun and although today wasn't ideal, we were glad we had done it instead of skipping a day to wait for a little bit more moderate conditions  This way we remained a day ahead of the cold front that was forecast to blast through here soon...

Goodman's Bay is another new anchorage for us.  With southerly winds it was perfect for a good night's sleep... and after today... we needed it!