Clearing In At Morgans Bluff 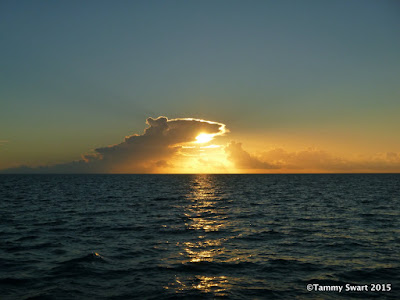 Our weather-driven scramble to get south and east left us with several Port choices to clear into the Bahamas.  We didn’t want to stop in Bimini because it would cost us a day’s travel.  We could have done it at Cat Cay but they charge a $100 fee to come to the boat.  Granted, the fee is applied to services, but we didn’t need any of their services… Same is true of Chub Cay.

Our plan was originally to go into Nassau and sidle up to the government dock there to clear… but then the wind made the choice for us.  It would be a near perfect sail from the Northwest Channel passage down to Morgan’s Bluff which is a tiny little harbor tucked into the northernmost tip of Andros Island.  We’ve never been to Andros and it is supposed to be a very “laid back” place to clear Customs and Immigration… let’s do it!

Our night on the Northwest Shoal was perfect.  The water was near flat with only the most faint roll.  Having been on the boat for so long, our bodies don’t even notice it.  They only way I knew of it was seeing the gentle sway of the things hanging down below.  We were up and away by 7:30 am with several other boats in sight. 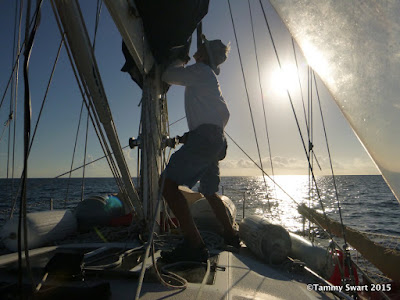 We motored through the pass and turned SE as we raised the main and rolled out the jib.  It was slow at the start, but within an hour or so we were making good time.  The winds were a little variable in strength which caused us to speed up and slow down, but with the engine silent…I said silent!  We could enjoy the sounds of the wind and waves along with the brilliant vision of sunlight sparkling on the blue blue water. 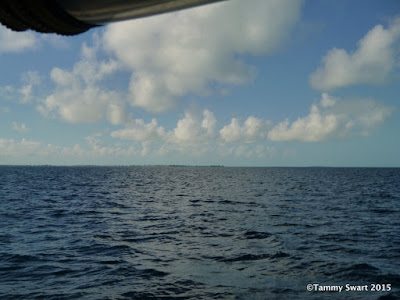 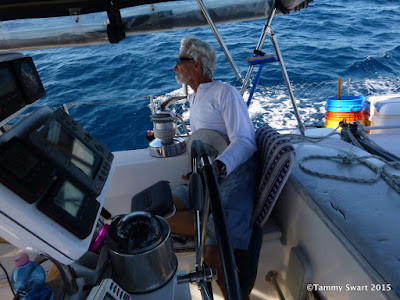 We could almost hold our course, just a bit of pinching… but eventually decided to fall off for speed and take a long tack to try to make our finish.  (sorry, racing terms are all I know) We found the water depths to be inaccurately charted and could come a good bit closer to land before our first tack.

Dos Libras may be crewed by racers, but she sure doesn’t tack like one.  Even with the increased performance by our new mainsail, we can’t go to weather like the lightweight fin keel racer/cruiser we used to have.  But the day was young and we had a short distance to go… still plenty of time to mess around out here.

Bruce rigged up our cedar plug and tossed it off the stern.  That’s fishing.  We were trolling a line.  At the time, I thought we were legal with our unexpired fishing license from our previous visit to the Bahamas onboard.  We were probably going too slow to attract a game fish anyway…

We went out a ways and tacked back in.  I knew it would be short but if we could get close, we would just drop the sails and motor the last part in.

I answered a call on VHF from Mañana as they put out the request for information on West Bay… boy do we have information about the anchorage at West Bay????  I told them what we knew and where we were headed… long story short, they decided to come to Morgan’s Bluff as well…AND two other boats joined in the conversation saying that was where they were heading.  First boat in was to let the Harbormaster know that four boats were coming to check in.  CruiserParty!!! 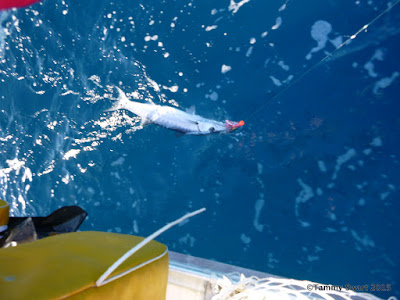 We were totally enjoying the day and the sailing as we neared the coast of Andros once again.  The depth began to register on the instrument and I suggested that Bruce bring in the fishing lure… at which time it suddenly went zzzZZZZZZzzzzz!!!  Fish ON!

I backwinded the sails which left the boat gently drifting away from the island.  Bruce went to the rod and began to reel in the mystery fish.  I grabbed the net and the camera and ran around ineffectually until Bruce got the fish closer in.  Aw it’s a Barracuda!!! 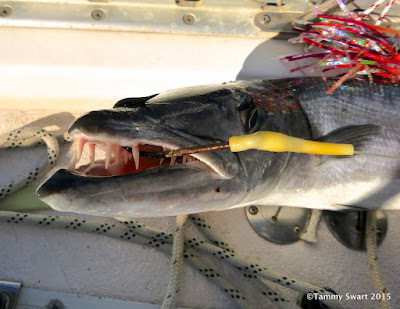 Earlier in the day we had the conversation about whether or not we would try eating a barracuda if we caught one.  We decided we would… after checking with the locals about it.  So.  This fish would be kept.  It was kind of large and I remember that smaller reef fish are safer from the dreaded ciguatera that comes from eating reef predators.  We will definitely be consulting local knowledge before this fish passes our lips. 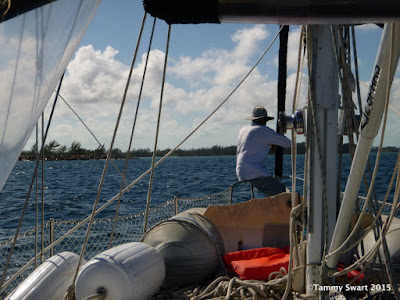 We got the boat going again and sailed back toward Andros until it began to shoal, then we rolled the jib and dropped the main… loving our new sail pack…  The winds had picked up a bit and clocked around to almost on the nose as we wove our way to the harbor entrance by following the depth contours leaving a drunken looking track on our navigation instruments.

The waves were rollicking by this point causing us to be unable to see any channel markers… well not really.  There WERE no channel markers… First sign you aren’t in the US anymore… I asked Bruce to stand on the bow to spot coral heads just in case… as we followed the charted course into welcoming arms Morgan’s Bluff. 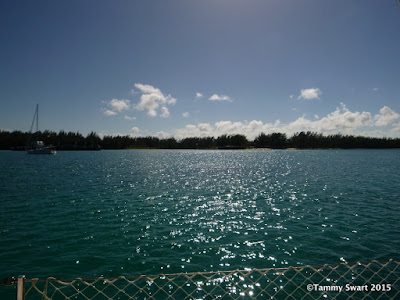 Two boats were already anchored in the outer anchorage, one of which had participated in our earlier conversation.  We anchored near them and had a bit of trouble getting the hook to set.  They advised trying closer into shore, which we did.  They had already notified the Harbormaster that we were all coming.  While we were fiddling with our anchor, the other two boats came in and anchored nearby. 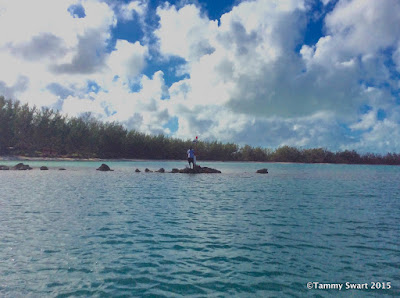 Mañana offered to spare us having to take our dinghy off the deck by ferrying us in… AWESOME!  So, we hastily gathered our papers and joined Tom and Andrea for the short ride into the inner harbor.  The water outside was calm, but the water inside was dead flat.  We easily found the little pink harbormaster’s building and pulled up to the high concrete bulkhead. 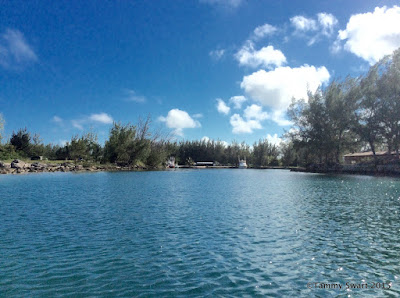 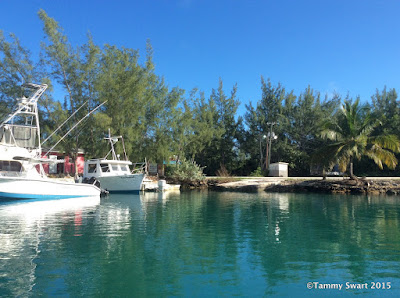 It was a challenge to get out of the dinghy but we did it.  Before long, the other two boats were here and the Harbormaster (a sweet girl with red RED braids) called Customs and Immigration.  She gave us the forms to fill out while waiting and we all chit-chatted.  Texas, California, New Mexico and Canada were all present.

The guys from C&I showed up soon and seemed a bit confused by all this action.  I guess Morgan’s Bluff doesn’t see this much business usually and they were happy to have it, but mystified still.  I was encouraged to go first so I took my papers into the little pink hut and handed them over.  The guys went over them, asked a few questions… none of which was “do you have a cat on board?”…so I volunteered my pet permit.  I needed it to be validated in case I had to take Jezabelle to a vet before entering our next country.  There was a little glitch because I didn’t have copies of the pet permit and there was no copy machine here… but they let me keep the permit without much objection.

I was done!  They gave me the four months I asked for.  We don’t plan on staying in the Bahamas for four months, but if we end up doing so, I won’t have to check in again until then.  We waited for Andrea to do her check-in then we told the others to meet us over at the bar.

We bought drinks and found a spot on the patio overlooking the inner harbor.  My Cranberry and Vodka was strong.  The others had beer.  It wasn’t long until we had all four boats accounted for and conversation flew.  I wandered off to see if they were serving food and to my delight… they were!  While I waited for our order, I asked the locals about staying here during the big Norther’ we were expecting.  It would be nice to have time to explore Andros a bit… I was directed to an old man on the patio.  He turned out to be the infamous Captain A**hole I had heard about…

He and I chatted for some time and I was very nearly convinced to bring the boat into the inner harbor in the morning and med-moor to the trees on shore.  His friend Sully could take us around the island while we waited out the weather.  I was so excited!

Very soon the food we ordered, delicious fried shrimp and battered fries, was ready to eat.  I left Cap’n A**hole and went back to my tribe.  The shrimp was the BEST!  These babies were huge!  Everyone enjoyed their dinner while we chatted about plans and weather and where we would go next.  It looks like everybody will be heading the same direction.

We finished up our food and drinks and we all disbursed back to our respective boats just as darkness fell.  It was a good day.  Oh… and that Barracuda?  Too big.  Sadly we killed a fish we can’t eat.  We will be better prepared next time.