Escape To The Bahamas 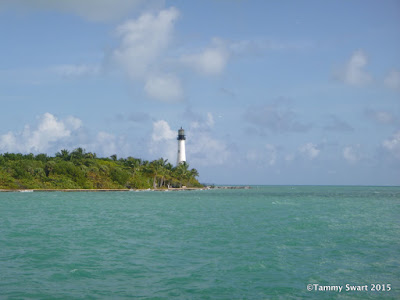 We got up as usual in the morning, no rush.  We had already decided that we would leave on Tuesday when the weather had a chance to moderate further.  Chris Parker had advised that a Monday crossing of the Gulf Stream would be doable if one waited until mid to late morning to leave Miami.  We chose favorable over doable…

For some reason… we decided at about 10 am that we would make a mad dash for it.  I was hoping that we could make better speeds than the 5.5 or even the 6.5 we normally use for estimating our arrival time.  Our speeds had been so much better in recent days with our new mainsail as we traveled from the west to east Florida coasts…We loaded the dinghy onto the bow and motored out through the Florida Channel before 11 am 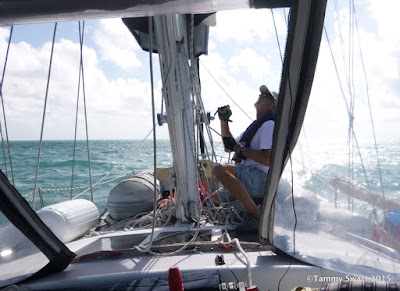 There were some pretty big boxy waves out there as we neared the end of the channel.  Bruce raised the main while I kept the boat in position.  Jezabelle began to notice that this was going to be another one of those days… She repositioned herself as the boat settled onto her route in bounding leaps.

It really wasn’t bad.  The winds were in the 14-17 range with an occasional 19 knot gust.  We had reefed main and jib and no weather helm.  The problem was the waves.  We had several nice ones, followed by two or three really big ones which would set us up for a monumental slap on the bow that would bring the speeds down to into the four knot range…  Poor Jezabelle promptly tossed her cookies and other things in the cockpit, then settled into a defensive sleep. 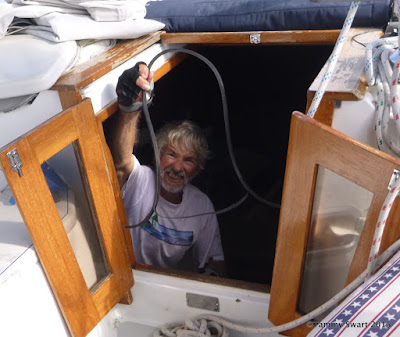 We knew that it was only temporary, that the winds and waves would moderate.  They did, slowly.  Bruce and I really enjoyed the romp.  Until suddenly the engine alarm sounded shrilly!  We shut it down and our speed slowed to the high 3 knot/low four knots and Bruce disappeared below to check it out.

He popped up with a shredded belt, which he assured me could be replaced quickly.  So while we wallowed around in the big waves, he toiled down in the airless heat of the engine room.  He had us back up and running in less than ten minutes.  A record, I think. 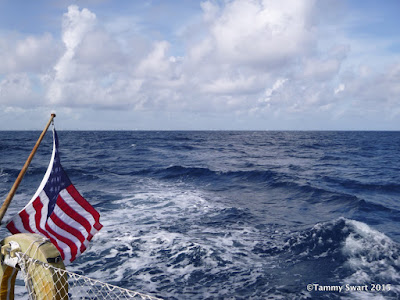 So our day progressed with sunshine, clouds, lessening waves, lighter winds, one other sailboat that caught up to us when we were down, one cruise ship, two sandwiches, one sunset and a tanker.

Jezabelle was superb throughout all of it.  She just napped and stayed out of the way. 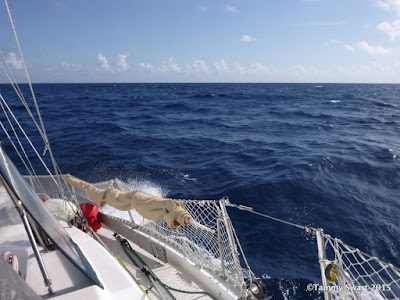 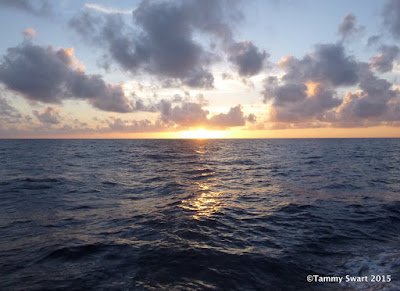 Sunset brought a conflict of thoughts.  It was beautiful.  The approaching night was awesome to watch as it proceeded from dusk to dark lit by the path of a large crescent moon.  As darkness fell, Bruce got things ready for dropping sails so that he wouldn’t be scrambling without sight later.  We donned our life vests and I gazed off across the waves. 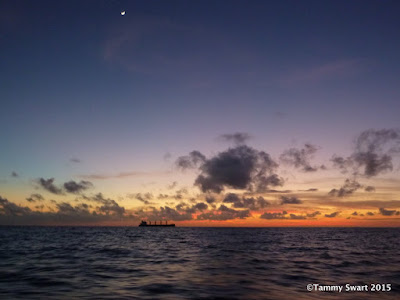 I was having one of those mental arguments when part of me wanted to be joyful at the beauty of this moment… we leapt across rolling waves with the sparkling moonbeams and stars popping out of the night sky.  The warm moist wind flowed all around me.  The last lingering bits of daylight lit the passage of a silent tanker off behind us and the dark of the Bahamas loomed before us.

We had seen land just before dark.  I could smell it.  Wafting across the waves on the breeze… that indescribable smell of the Islands.  Almost there.  My hopes of making speeds sufficient to get us safely in from the Florida Straits before darkness fell were dashed as the few lights began to blink awake on the tiny islands ahead.  I could see the lighthouse on Gun Cay.  Ten second white.  I counted many times as it turned and turned.  That was our target.  We would pass between Gun and Cat Cays on tracks laid previously as we exited the Bahamas back in late June.

Doubts began to fill my head.  We fired up the radar.  We watched as a huge yacht moved lazily down the coast and disappeared south.  What if the conditions in the pass are different?  What if the tide causes a rage?  It shouldn’t.  It should be incoming with winds across the beam… but what if it wasn’t?  What if I’ve misjudged?  What if the GPS (both of them) quit, or are not accurate for some reason?  What if there are swirling currents that I don’t know about?  What if they push me onto the rocks so fast I can’t stop it?  I can’t even SEE them!!!   What are our alternatives???

Could we just backwind the sails and drift out here all night?  Wait ‘till morning and enter safely to continue across the banks? No.  Could we turn north, or south and just sail on and enter elsewhere?  Well I guess we could... but No.  We have got our selves into this and we’ve got to see it through.  Put on our Big Sailor Panties and carry on…

Well, no time like the present.  I took the helm and Bruce went forward to relay what(ever) he could see.  My eyes were completely blinded to the dark around us by the lights of the navigation instruments (even on low light power).  I couldn’t adjust quickly enough from bright to dark, so he must be my eyes.

I checked everything, speed, depth, radar, course, bearing… I ran through them all repeatedly as I began to approach our track.  I couldn’t afford to glance away as the waves altered our course with decreased speed.  I had to speed up to keep steerage.  I don’t even remember the things Bruce said to me… I see the gap, passing the lighthouse…

I DO remember the thoughts in my head…this is STUPID!  What were we thinking.  People are going to laugh when they hear I’ve crashed our boat onto the rocks on our first day back in the Bahamas… but mostly, We are NEVER going to make a foolish choice such as this again!!!

But how can you know it will be foolish?  Obviously we didn’t or we wouldn’t have done it.  We really thought we would make it across before the last rays of light disappeared.  If it hadn’t been for the waves, which were bigger than forecast… we would have literally flown across the stream.

But this is my reality now.  I’ve got to get this boat safely in from the big water to anchorage.  My eyes flitted back and forth from the chart plotter and radar to the iPad with our tracks to follow. I tried hand steering thinking that if we got a swift shift from current, I could react more quickly.  That was a mistake.  With no visual references, I couldn’t tell when the boat responded to the turn of the wheel until it showed up on the chart… too late.  Oversteered.  I got us back on track and re-engaged the auto pilot.

I stood with one thumb on the port button and the other thumb on the starboard button.  Adjusting this way three degrees and that way three…  The waves calmed and I could see that we were inside.  We were in the channel through the invisible rocks that could… never mind.  They WON’T!  We got past them!

I made the turn to starboard, once again trying to hand steer.  Seeing the two curving lines on our track later caused me to laugh… but not at the time.  But it was OK.  Even if I went off our track, there was plenty of space and depth around us at this point.  We were on the home stretch.  The anchorage was just ahead.

I called to Bruce to be ready to drop the anchor.  He left his post as lookout and went to work.  I continued to monitor my instruments.  What’s that?  On the radar…  It’s a blip.  Is it ground clutter like we had outside all around us?  Nope, it’s a definite blip, and it’s moving.  I looked out around the panel and saw a very well (thankfully) lighted work boat passing around in front of us.  They posed no problem as they were much more maneuverable than we were.  They disappeared into the night with sounds of roaring engine and laughter.

Almost there.  .25 miles to go.  I rounded an unseen marker.  It’s on the chart but maybe it no longer even exists… who cares.  I’m rounding it.  I turned up into the wind as I slowly approached our anchor spot marked on the chart from our time here in June.  I called to Bruce… ready?…. I switched the engine to neutral as we coasted those last few feet… DROP!!!  I threw the throttle into reverse to stop forward motion and hopefully make the anchor chain pay out in a nice line…

Back to neutral as we waited for the wind to line us out… backward throttle again as more chain pays out… neutral again… settle.   Settle.   I backed down on the anchor and felt the reassuring tug as we reached the end of our chain.  Literally and figuratively.  I switched everything off as Bruce secured the snubber and returned to the cockpit.