It’s morning.  We are sitting in the cockpit just having seen a gorgeous pink and orange sunrise.  The internet is down…

Bruce is wondering if it’s some terrorist act or maybe some subversive group of hackers have banded together to deprive Georgetown, Bahamas of access to the world.  I’m just thinking how inconvenient it is that I can’t post that sunrise to my page and show Bruce a funny blog post a friend did… 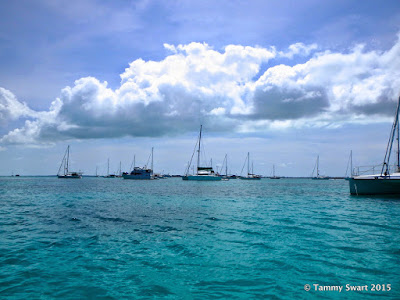 Yesterday we arrived here in the area of the Bahamas known as  “Marathon East”, where Cruisers from around the world congregate to live with other like minded souls.  It’s different from how I imagined it but then, it always is.  Our first line of business was to go and seek out this magical fountain of life, the free water offered to all Cruisers by the local grocery store.  Free. Water.  FREE!!!

We consulted all of our resources which are inexact, but more like clues to a scavenger hunt.  Snippets.  You go under an arch… There’s a dinghy dock with a faucet…

We found it easily enough on just that.  With the water taken care of, we moved on and tied off to the dock.   We climbed nervously up the board leading from the dock to the land.(see the ramp at the far left of this picture) It’s what you might see propped from a boat to the dock for dogs to climb aboard…  Rickety to say the least, and treacherously steep at low tide.

Emerging onto the street, I found myself thinking… Mexico.  The activity around the large-for-the-Bahamas grocery store was brisk.  The dusty (sandy) street lined with colorful cement buildings and people scurrying everywhere was not like any “town” I had imagined, but I’m beginning to get used to that.  The grocery store had a lavish array of stuff to buy compared to the tiny stores at Staniel Cay and Black Point.  But still by US standards, it's more like a well stocked convenience store… with prices as high or higher.  We picked out a few things and headed back to the boat. 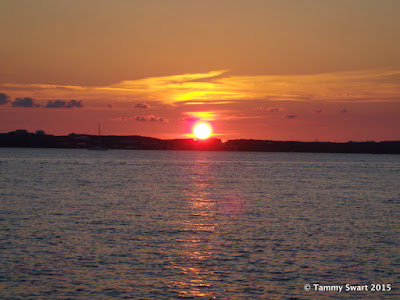 Settled with a sundowner later in the evening, my mind wandered back to our foray into “town” two days ago.  We bicycled from Emerald Bay Marina into town looking for a bakery that had been rumored to exist.  We had to ask, but found Frankie's eventually in the center of Farmer’s Hill.  The hub also consisted of a nondescript looking square building with two ancient gas pumps out in front and an equally nondescript square building with an old snaggletoothed woman sitting on the stoop.  A home.  I waved and the lady smiled a big greeting.

Frankie’s was closed until 11 am.  We found another small store there in the town center which advertised beauty supplies, ice cream and snacks and outboard engine supplies…  hmmm.  We turned up a street and found a long low building with an unmarked door.  A BTC top-up sign hung above the door.  We looked closer and found this to be a “market”.  Inside we found the usual stuff, same as Staniel and Black point.  We picked up some potatoes and carrots, onions and eggs.  Oh, and lime juice.  Random.

Killing time… we rode down a street that advertised Beach Access which dead ended at some modest homes on a sloping hill… but below the homes was a shining crescent of snowy white sand with lapping turquoise waves.  We were dumbfounded by such beauty hidden away in such a place.  Where are all of the developers?!!!  Don’t they know about this?  How can the common people such as ourselves have access to such riches? I felt like somebody should be shooing me away!

Returning to Frankie's, we found the “open” sign out a good half hour before her stated time.  We picked out some moist looking cakes and an orange soda (the selection is meager and your choice is whatever they happen to have that day) and settled at one of four tables to eat our brunch.  There was a TV going in the corner and I glanced over at a diaper commercial.  A new type of diaper was advertised but I’m still unclear as to what was so special about them… I wondered where the broadcast was coming from… surely not the Bahamas.  It was “Oxygen”.  That’s a cable station.

My mind reached further back to remember a conversation with young man at a fish cleaning station back at Black Point.  He said he had no fish to sell, these he was cleaning were for his family because there was no gas available for their outboard motors.  He didn’t know when more fuel would be available so he had to feed his own before selling to others.  He welcomed us to his island and I asked if he had lived there his whole life.  He said yes, except for high school and college, which they attend in Nassau.  He said some kids don’t come back but he had returned home because he found Nassau’s hustle and bustle to be too stressful.  Stressful.

I started to wonder how the people living in these outer settlements feel about watching cable TV.  Are they curious when they see things on TV that they will never know or experience in real life?  Do they feel cheated?  As much as I try, I can’t get my head around it.  Is it just some passing thing like when I see snippets of life on TV, say in India, or the Middle East?  Those places mean nothing to me so my mind just skips over it.  Is it that way for the Bahamians? Is it so foreign to them that it just doesn’t compute?

Am I being condescending?  I isn't intentional… I just really want to understand how it is to live here for real.  Maybe they do have access to all the “stuff” but at a higher price. But it is not evident in the small towns and the areas we have traveled.  A few shiny bicycles are about the only nod to consumerism that we have seen. There are no fancy shoes or designer clothes.  No shiny cars.  There is just nothing here!!!  Except for stunning beauty whenever you turn your eyes to the coast.

Because we are still insulated by our boatload of provisions… I’m not yet forced to live like the Bahamians live.  I don’t have to survive on just what I find in their tiny stores.  I don’t have to pay the prices for goods that are so inflated because they have come so far…. I’ve still got my own stuff.  I wonder how long it would take to begin eating like a Bahamian.  Would my American taste for variety wither and quietly die a natural death, or would I pine for the things I’m used to so strongly that I would want to leave the Bahamas and go back to where my comfort lies? 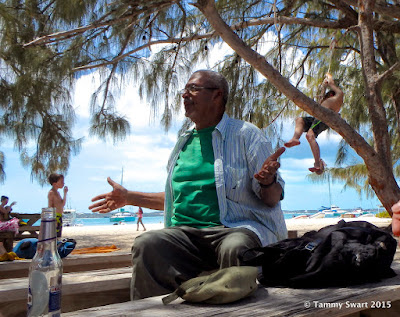 Later in the day we attended a talk about the history and culture of the Bahamas.  A man named Cordell, college educated in the States, returned to the Bahamas to help his homeland improve their quality of life. He does these weekly educational presentations to newcomers to Exuma.  It was broad ranging and very informative and it answered my question.  Why ARE there no developers snatching up land and building high-rise hotels here?

Long story short… when slaves were freed by their former owner, a Mr. Rolle… they were all given land.  The land was deeded to them into perpetuity so it can never be owned by anyone other than their descendants.  It is all owned as part of a public trust and if a person can prove they are descended from one of those slaves they can pick out a piece of land for themselves for free.  All they have to do is build a home on it.  If they fail to do so, it reverts back to the common holding.

So that’s why we see so many people here living in tiny homes on a piece of land that may have a view worth more than a thousand pots of gold.  That’s why these people seem happy to subsist.  But is that a fair thing to do to a person?  Give them a home so they don’t have a goal?  Nothing to work for?  No reason to thrive?  Is this just my American mind casting projections on others as if ours is the only good way of life?  Isn’t that way of life the very thing that I have fled in coming out here on a little boat? 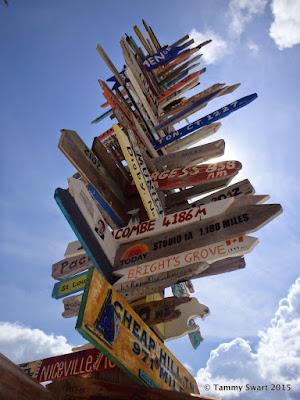 Why is it so difficult to dislodge these ideals and preconceptions from my head?  Why do I unconsciously cling to them even while I’m trying so hard to shed them?  Travel is certainly an eye-opener.  Cruising even more-so as it allows us to delve deeper into the communities that we visit.  We can stay longer, unhurried.  We can see the backstreets and not just the shiny colorful tourist zones.  We can question.  We can learn.

Little by little I can feel things shift.  It seems as if the foundation is cracking inside my head.  Everything I once thought was certain comes into question.  It feels foreign and kind of fun for a bit, but then it feels like too much too soon…Better to let the rocks of my foundation tumble down the slope as pebbles… not an avalanche. I scurry back to my boat and realize that the internet wasn’t down.  I had exceeded my pre-paid data limit.  I go through the refill process and ahhhh… I can feel it like lifeblood flowing through my veins.   Internet is back. 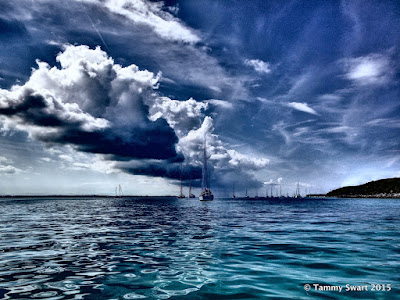