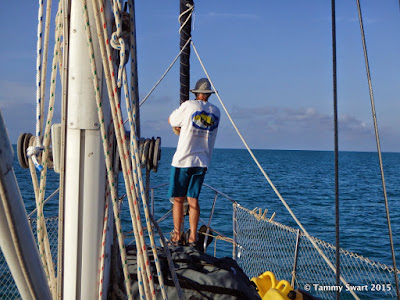 We had planned to stage close to Galliot Cut so that we could get started as soon as the sun was high enough for us to safely navigate through the coral.  But because we had such a great time at Great Guana Cay, we had to leave there earlier than we like to make the 35 kn miles to Emerald Bay.  We pulled up the anchor and with Bruce on the bow, motored upwind towards Galliot Cut. 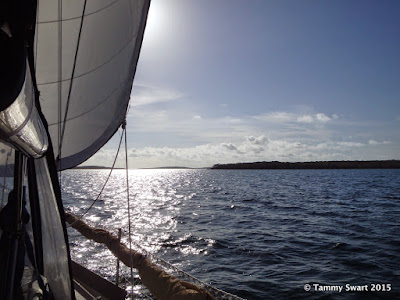 The sun was still way too low when we began to navigate through the small cays that are cluttered around the cut, but fortunately following the Explorer Chart got us through it with no problem. 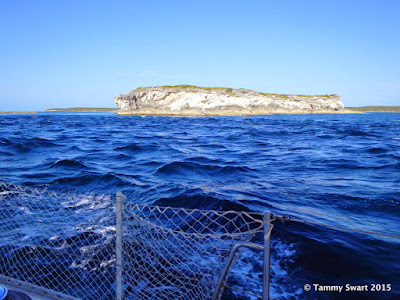 There was a little bit of excitement as we looked ahead and could see a definitive line between the calm flat water and the churning waters just outside the cut. The tide was going out so we figured it couldn’t be too bad.  It was a wild ride that required all of my concentration as we crossed that line and began to bounce around.  The chop was unbelievable and I looked down to see that we had topped 7 knots SOG and it felt like we were standing still.  The pictures just don’t do it justice. 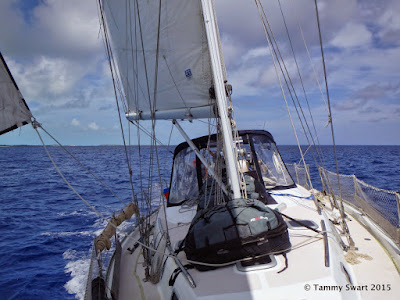 And then it was gone…  just as quickly as the waves began, we turned slightly more south and they smoothed out into a procession of long gentle rollers that carried us high and low all the way to Emerald Bay. 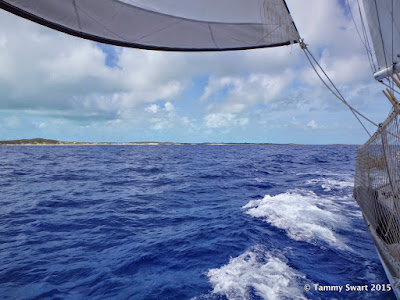 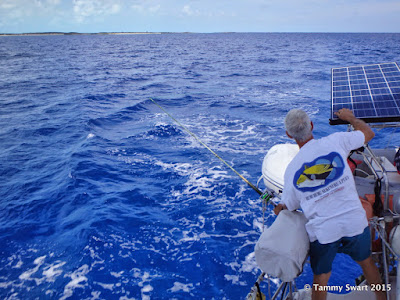 Bruce did some fishing… well, we trolled a line.  We’re still hoping for that Mahi Mahi… but it was not to be. 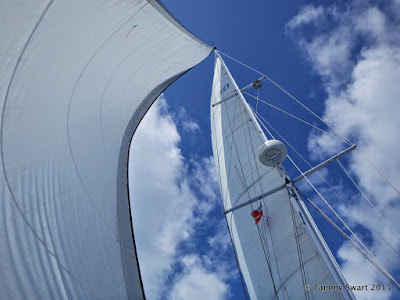 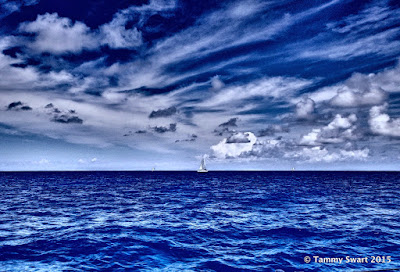 We followed the shoreline closely to reduce mileage.  We wanted to arrive at the entrance to the Emerald Bay Marina with good light because it looked ind of tricky on the charts.  As we neared the inlet, the water became more and more shallow. 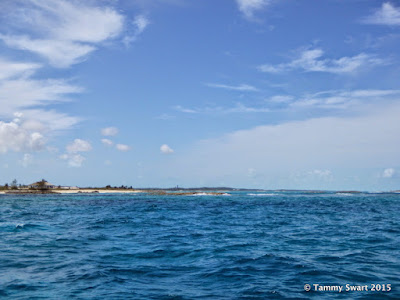 We stayed where we thought the channel was as I strained my eyes to make sense of the channel markers.  As usual… some were missing.  Most were missing.  But the closer we got the more clear it became.  There was a dogleg and a narrow (really narrow) cut.  The long swells were scooting us along and I got a little nervous as we closed on the entrance fast.

And then we were IN!  The waters calmed instantly as I radioed the Marina for assignment.  We turned to the left and found a spot between two other sailboats on a long floating dock.  We had some help docking and were glad to be settled safe and sound.  We’ve conquered the Big Water of the Exuma Sound, and while I wouldn’t wish to have to make that entrance in any worse conditions, in hindsight it was a piece of cake!


Emerald Bay Marina is in a very well protected basin with only that one keyhole entrance.  Even so, there is a bit of swell in certain conditions and the boats in the basin seem to be in perpetual motion.  We tied up with extra lines to keep the boat from drifting fore and aft and it seemed that we were retying them quite often.

The Marina has three levels of pricing.  It is in a state of incompletion with the completed marina slips being the furthest into the basin.  They have full service:  water, power and even pump out I believe.  The second section is near the entrance and the slips only have water available at the slip.  The section we chose was the cheap seats.  $.50 per foot with a three day minimum stay.  We’ll TAKE IT!  We can haul water if needed and don’t need power as long as we’ve got sunshine!

We arrived late on a Monday afternoon and quickly showered up so that we could attend the weekly Happier Hour.  The marina puts this on free of charge and it is truly the BEST happy hour we’ve ever attended.

It is held upstairs in the Boater’s Lounge that will rival any private home for style and comfort.  Oh, and Air Conditioning!!!  Cool, dry air!  Add in free rum punches as fast as you can drink them and some really delicious food: chicken wings and sauces, cheese/meat platter, conch fritters, fruit tray, assorted sandwiches and more!  I wasn’t going to have to make dinner!


Our plan was to maybe do a few projects and get our mountains of laundry done.  Did I mention that the laundry machines are also FREE!!!  Yes, four of them.  Nice front loaders like I have at home.  Free! 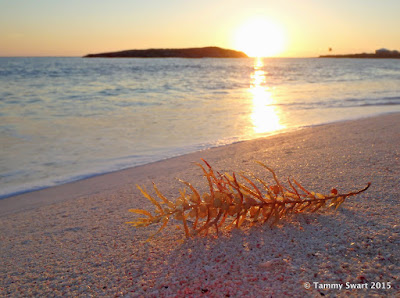 We made it to Exuma.  We have guests coming but don’t know yet when they will be arriving.  We need to do some major housekeeping and then just relax.  We ended up staying for five nights because we can.  We explored the surrounding area on our bikes, we walked the beach every day, we washed mountains of laundry…  Basically we just took time to relax and go nowhere for a while.  It was very nice and we will return for sure! 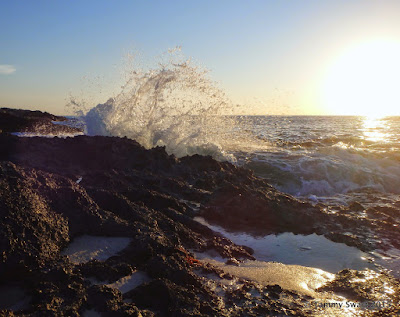