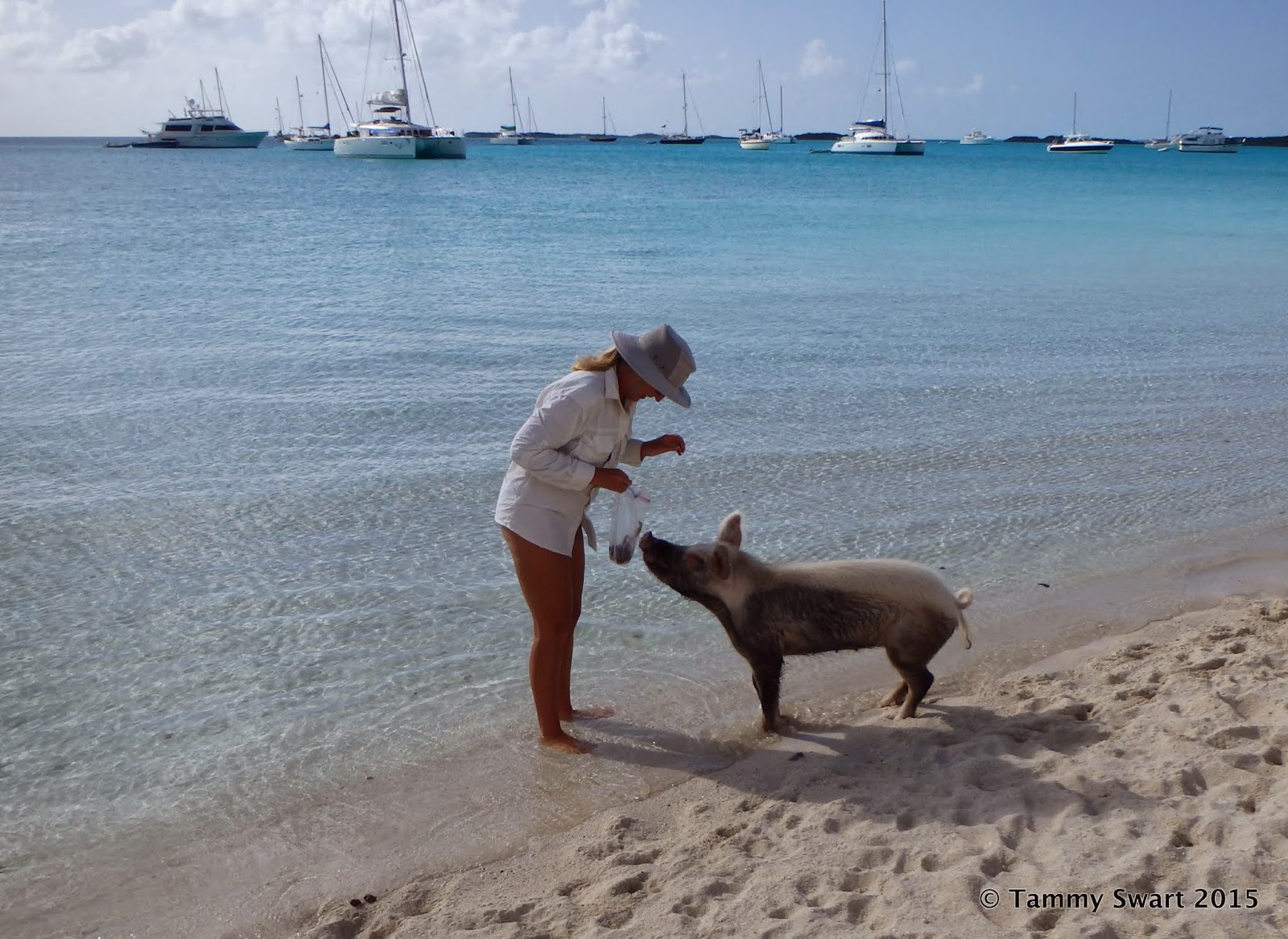 I’ve been following other cruising blogs and reading about all the fun things to do in the Bahamas for so long...dreaming of things we planned to do... some day...Two of the more popular hot spots, Big Majors and Thunderball Grotto have finally left the realm of the mind’s eye to become my reality.  Even though I’ve “lived” these places vicariously so many times… nothing beats the real thing!

We gawked at the stunning beauty as we dropped sail and motored into the anchorage at Big Majors Spot (N24°10.962 W076°27.618).  The cove is huge and can accommodate LOTS of boats.  It offers protection from all but westerly winds and offers flat waters in the 9-11 ft. range.  We spent three days here with very brisk winds ESE in the mid 20 knots and never felt it. 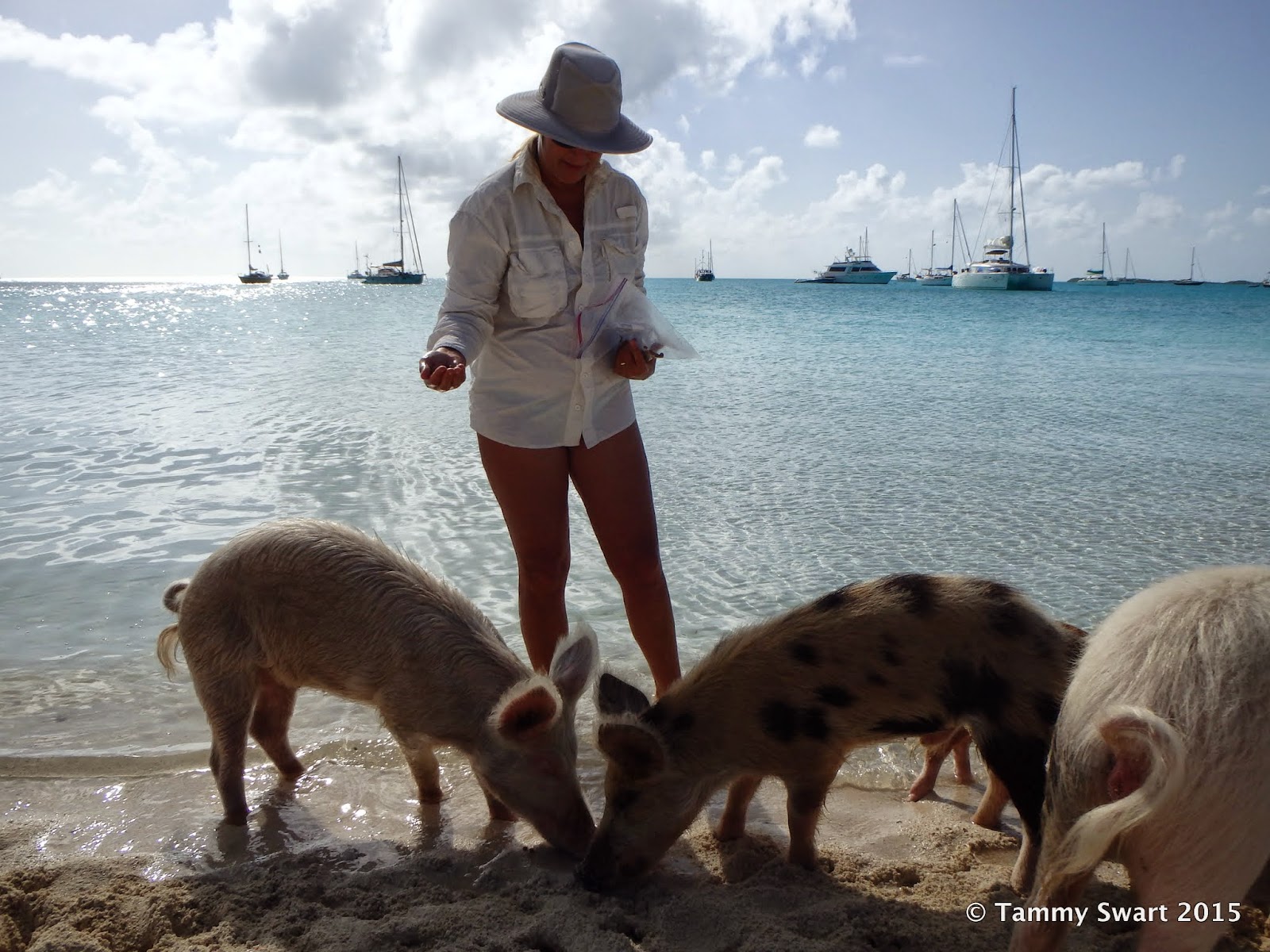 I couldn’t wait to get to the beach where the famous swimming pigs were said to live.  Seeing pigs - normally residents of muddy sties - trot down the white sandy beach sort of upset my sense of order.  I guess I should be used to it by now… Cruising will do that. 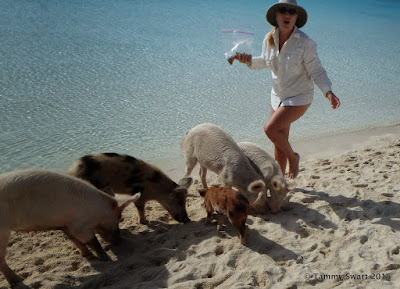 They were so cute.  My confidence in my personal safety bubble (PSB) allowed me to boldly walk amongst the beasts carrying my meager bag of leftover cat food.  (Stale cat food is frowned upon my our girls)  Fortunately, the pigs were not so picky!

They gathered ‘round my legs like kindergarteners seeking gold stars as I danced to keep their gritty hooves from finding my bare feet!  I was not always successful but it didn’t hurt (much).  Again, counting on my PSB to protect me… I wondered if feeding pigs was similar to feeding horses.  I remembered from my distant past as a horse owner that you could hold the food on a flattened palm and not get sucked into the lips or teeth as the horse gobbled up the grain. FYI… this does NOT work with pigs.  I was doing OK with the smaller piggies, but there was one spotted bully who was a little more aggressive than the rest.  He managed to get my right index finger between his dull chompers.  OUCH!  I pulled my finger out of his mouth.  Luckily it didn’t break the skin but my finger did swell up and feel very bruised and tender for a couple of days. 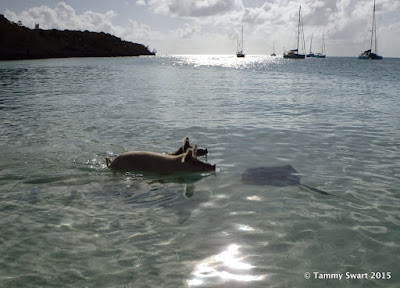 The pigs instantly lost interest in me as I dumped the last of my cat food onto the beach, and turned to the new arrivals.  There were several people with better scraps than we had.  The pigs ate all that and then moved on to a larger boat arriving at the beach.  The pigs finally had to leave the beach to get the food.  We never got to see the pigs swim, but they did wade around chin deep. 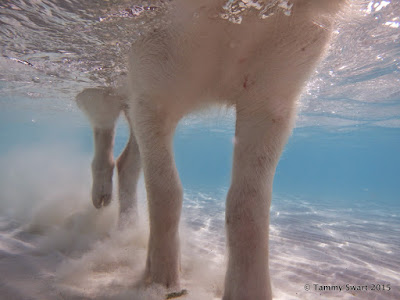 But wait!  Things got better when a stingray showed up!  He weaved around through the prancing pig hooves in his attempt to get some of the food action.  I stood in knee deep water transfixed as I watched the ray swim right up to my feet.  A lady in the boat asked me if I was scared…  I was sort of committed at this point.  Nowhere to go… so I just stood there and the ray never seemed to care. 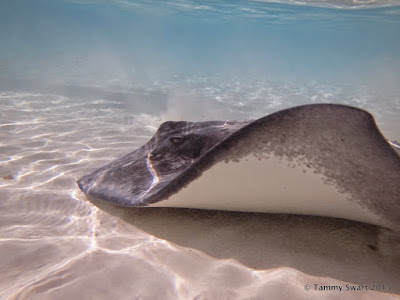 It was so cool watching him compete with the pigs for snacks.  I probably could have touched him if I weren’t such a chicken. (remember my PSB let me get pig-bit)

Later in the evening we joined friends aboard Oh My for sundowners.  Phyllis and Bill are long time Bahamas Veterans and Big Majors/Staniel Cay are among their favorite stops.  We arranged to meet up with them in the morning at low tide to snorkel Thunderball Grotto. 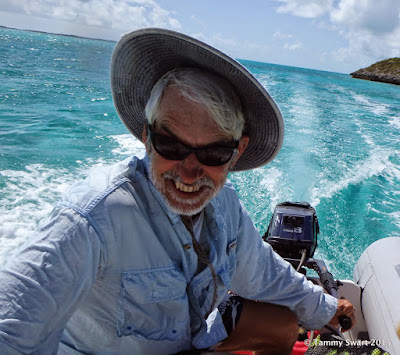 We took off following their much faster dinghy around the point and braved the wind driven choppy waves to the grotto.  It didn’t look like much, just a lump of rock.  I’m not sure we would have found it without them.  We anchored our dinghy next to theirs and flopped into the cool water!

The best time to visit Thunderball Grotto is during slack tide, high or low.  Low tide was our preference as it allows entry to the grotto without swimming underwater through a hole.  We arrived there at just after low tide, but soon learned that the current was still running swiftly through the cave. Bruce followed me in as I kicked madly to override the current.  He follows to make sure that I don’t get into trouble.  He is a much stronger swimmer than me and could have easily blasted his way in… Finally I made it into the cave and was able to move to the side where the current was much less.


There were plenty of colorful fish hanging around just outside the entrance.  Large Sargent Majors swam curiously up to our faces and I remembered (way too late) that we were supposed to bring food for them.  Shucks!  Oh well, they were plenty close as they swam around us.  They thinned out inside the cave, as did the light. 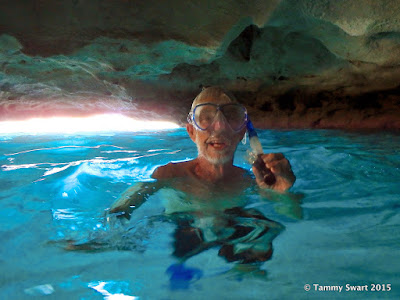 Once past the current, we popped our heads up and took a look at the tiny circle of sky at the top of the cave.  Our voices echoed off the irregular rock walls.  There are several holes in the top from which the more intrepid visitor can jump… not interested in that.

We swam along just outside of the mainstream current that ran from an entrance at the opposite side of the cave.  I saw several large schools of fish maintaining their spot in the rushing water.  I was reminded that without sunlight, things lose their color as everything was a uniform shade of cool blue. 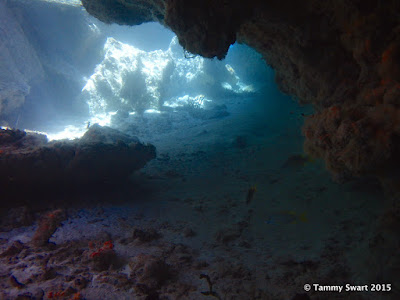 We swam from the dark creepy corners into the warm brilliance of color where small holes let in unexpected splashes of sunlight.  Never before have I personally experienced the difference that the presence or absence of light makes in the underwater world so dramatically. 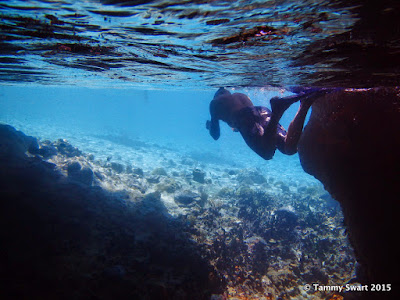 The rushing current made me a little bit nervous.  I took advantage of it to whisk me back to the other side of the cave where I paused to take some pictures of the milling Sergeant Majors. 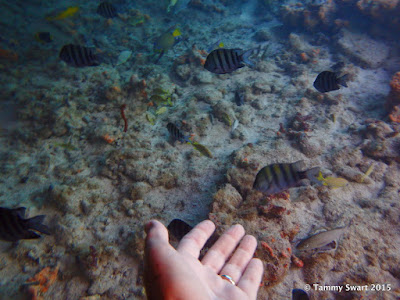 I reached out my hand as they peered into my swim mask but they remained just out of reach.  They’ve done this before…  I began to get cold and joined Phyllis in a shallow spot that was as warm as a spa.  We chatted while the guys did some more exploring. 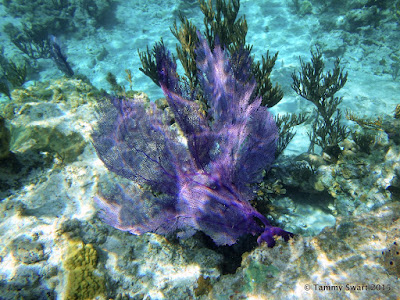 Bruce talked me into joining him for a look at the outside of the grotto where there was no rushing current.  There it was all colorful sponges, fans and fish.  It was like a mini-rock wall dive as we swam along the perimeter of the grotto. 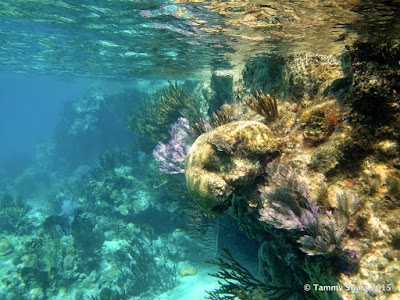 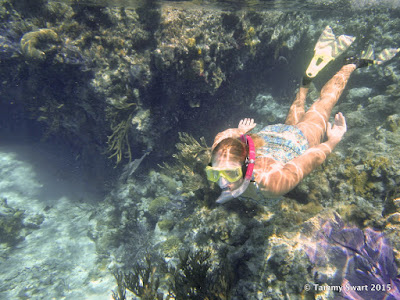 From time to time I would peer out into the distance, ever vigilant for the lurking shark, but there were none.  Cold again, we all returned to our dinghies and Bruce and I said goodbye to Phyllis and Bill.  We wanted to do a little more exploring in the dink. 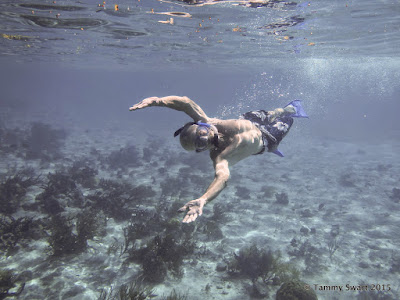 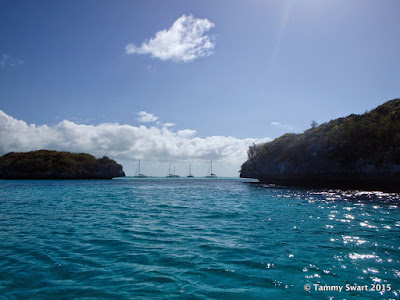 We puttered between the other small cays and I thought they looked very much the same as the grotto from the outside.  I wonder how many of these rocks are hiding secret caves yet to be discovered all over the Bahamas…  There was still quite a bit of current coming in from the Sound through a cut.  I was amazed at the creative and off the chart places boats were anchored.  It makes me think we’re really still scaredy cats.  Every time we do anything that isn’t on the chart I feel like I’m really being radical, but really… not. 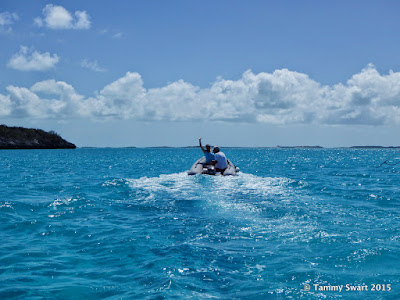 The next day we once again followed Phyllis and Bill, this time to the dinghy landing at Staniel Cay.  There is a stacked boulder wall enclosing the small sand beach just off the Staniel Cay Yacht Club that is designated for dinghies.  It’s a safe place to leave them but it can get crowded and the tide (as we later learned) will leave your boat high and dry. 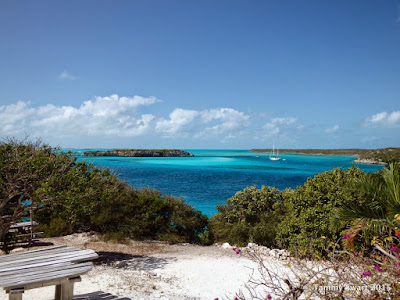 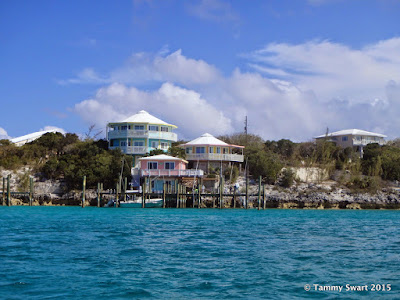 Staniel Cay is our first experience with the small outlying communities in the Bahamas.  We were on a mission to find more Bahamian bread, and to replenish our stores of fresh foods like milk and veggies if we could find them. 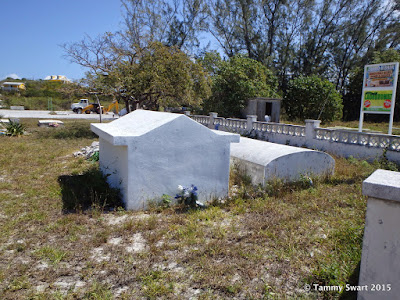 We strolled the dusty quiet streets while Phyllis pointed out things to us, kind of getting the lay-of-the-land.  It’s really such a surprise that there are so few people around.  A few tourists staying in VERY simple rentals and hanging out on the beach… and a few Cruisers taking advantage of the wi-fi here and there… that’s it. 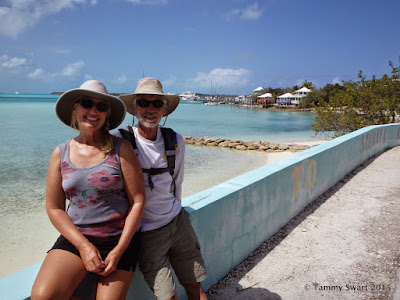 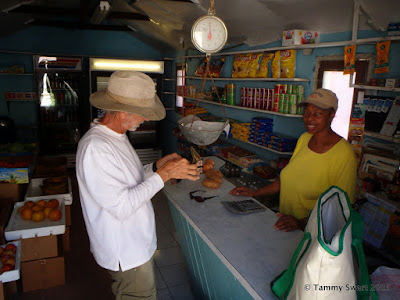 It didn’t take us long to pretty much cover it all… we placed orders for cracked conch at a new restaurant called Big Dogs, then we backtracked to do a bit of grocery shopping.  There are two stores here, the pink store… and the blue store.  There was no fresh bread at Rhonda’s house, so we got some at one of the stores.  Each place had the bare essentials, still the prices weren’t too bad.  But we still had plenty of provisions aboard and didn’t really NEED anything so it was still just another “event” on our list of things to do.

Back at Big Dogs, we took a table and fanned our hot faces while the cook prepared our order.  This would be my first experience with cracked conch and I had no idea what to expect.  It looked good but I was a little uncertain until that first bite. 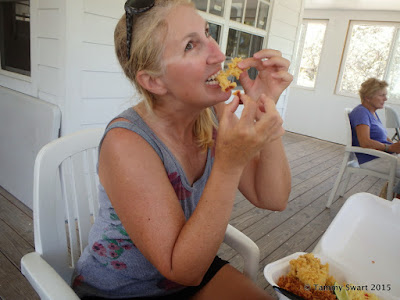 It was really good and not too chewy at all.  The common sides of peas-n-rice and potato salad were delicious as well.  We left there and stopped in for a drink at the Staniel Cay Yacht Club.  There we met Rhonda, the bread lady and in passing, we asked her if there was a place we could drop off donated clothes and household items for charity.  She said she would be glad to take them and make sure that they get to the right place, so we made plans to bring her our winter clothes and bedding the following day.  We cooled off a bit, then hurried back to the boat to put away our groceries and relax. 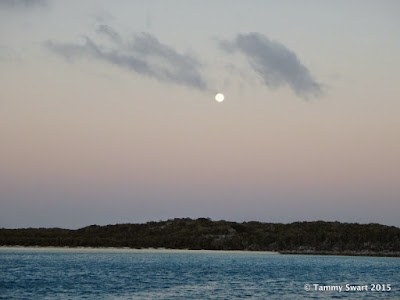 We spent next morning cleaning house and going through all of the stuff in the v-berth.  We filled three big trash bags with stuff!  I had no idea that we could get rid of that much stuff and hardly miss it.  I found winter clothes that I had forgotten and never even pulled out of storage since our first winter cruising…  OUT it goes.


You wouldn’t think they would have a use for winter stuff in the land of eternal sunshine… but Rhonda assured me that there was a homeless population in Nassau that would really appreciate our warm clothes and blankets.  It felt nice to donate, as it felt nice to get it out of our house!!

We enjoyed our four days here, but were feeling the need to move on… Next stop, Black Point!