After nearly four weeks spent in Georgetown, suddenly we are on the move again.  It’s amazing to me how easily that happened.  The winds that had been blowing in the 20s for days and days were suddenly moderating and it was time to go!

We left our new spot on Sand Dollar Beach unexplored, loaded the dinghy onto the davits, put away a few things down below and said goodbye to Georgetown on the morning net.  Then… we just pulled up our anchor and motored out between the reef markers and out Three Fathoms Channel to Exuma Sound once again.  This time the water wasn’t big.  It was perfect for a daysail.

Coming out of the cut we picked up a Buddy Boat for the day.  Uno Mas was also headed for Calabash Bay, Long Island.  They were motorsailing with only their jib while we opted to turn off the engine and enjoy the sound of the waves sliding down our hull.  The wind was a little too far east for us to make it on one tack but we didn’t care.  We had plenty of daylight for a mid afternoon arrival to the Bay and we were lovin’ it!

I am fascinated by the clouds hovering above the islands.  Looking all around, I can see where the islands are by the way the clouds line up above them.  The pictures do not show the shallow banks reflected on the cloud bottoms.  But with our polarized sunglasses, there’s a turquoise tint beneath the clouds that exposes the presence of unseen land and the surrounding shallow banks.
Our non-human crew members were not enjoying the sail quite as much… Jezabelle and Jetsam moved from one side of the boat to the other on the tacks.  As we neared Long Island, the waves became smaller and the ride a bit more smooth.  Jezabelle was tricked into thinking we had arrived and came up on deck to enjoy her favorite spot.

Her comfort was short-lived as very soon it was LAND….HO!!!!  She hustled back to the cockpit when we started rattling sails preparing to drop.  We would motor into the Bay to avoid the many coral heads scattered along a protective reef. 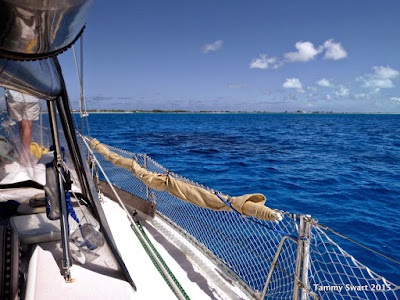 There are no markers showing the way so we picked our way in and I can tell you that there is no real clear way.  I really never saw the “reef” just dark looming spots that may or may not be spaced widely enough to cross…  We held our breath, pressed on and were grateful for the sunlight that exposed the really dark blotches. 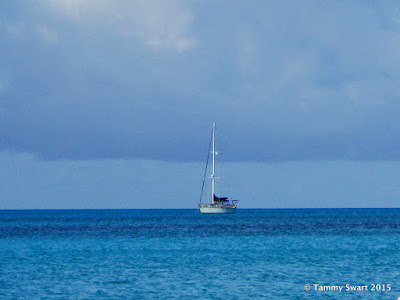 Inside the reef we found plentiful depths with nothing less than 9 feet.  We chose to drop anchor at the far north end of the Bay just off of the Cape Santa Maria Resort where we heard they serve free conch fritters with their happy hour specials.  More on that later…

While enjoying sundowners, our new friends from Uno Mas stopped by.  We have actually met them twice before… once way back in Clearwater Beach so long ago… and then at the dock party on Bimini.  We made plans for tomorrow and I can’t WAIT!!!

I can’t express how nice it is to be out adventuring again.  Let the Good times ROLL!