Dumfries Settlement (N24°35.708’, W075°39.021’) on Cat Island is not on the list of usual Cruiser stops.  I learned about it on Active Captain and read that there is a large cave here waiting to be explored.  The description and photos I saw on a blog left me a little worried that this one is a bit outside of our caving experience level, but Bruce was game, so we headed for shore with our water and flashlights wearing long pants for crawling around on cave floors. 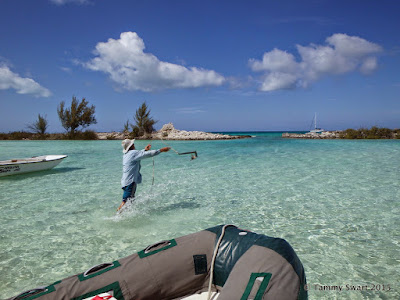 Our anchorage just outside of the narrow cut leading to a calm and shallow lagoon was perfect.  Good holding and just a short dinghy ride through the cut, this time at high tide, we beached the dinghy and threw out a stern anchor to keep it in position.  We knew from yesterday that the tide would go out leaving our dink high and dry.  There is a small gazebo built just at the edge of the high water mark but we found that the path leading to the “town” was NOT above the tidal flood zone as we sloshed through the water to get to the caliche road. 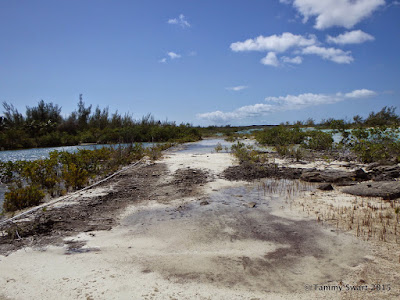 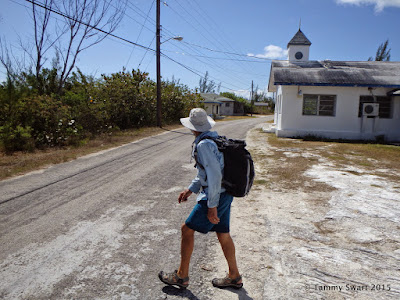 As towns go… Dumfries Settlement is rather on the skimpy side.  There is hardly a town at all and if it weren’t for the school from which we could hear children’s voices emanating… we may have not considered it a town at all.

There were a few old falling down buildings and a sports bar… but little else where we walked.  Following the instructions to find this cave very carefully, we trekked along the dusty roads and fallen down buildings.  We did find a few homes at the fork in the road, so maybe there’s more to this place than we’ve seen… 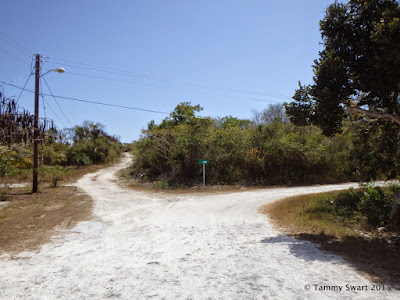 But our fork took us off to the right and it was here that our trail ended abruptly.  There was supposed to be a road leading over two hills, but instead we found a church.  Hmmm… 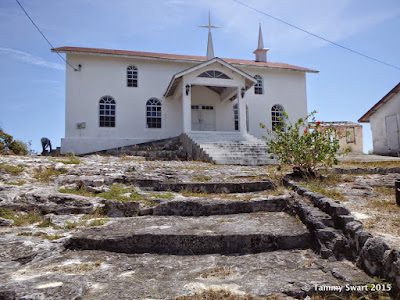 I rechecked the instructions and yep, we were in the right place.  After circling the church and looking around the perimeter of the property, all we found was a sink hole full of brush.  It didn’t look like the cave entrance I had seen in the pictures so we sat on the church steps and had some water while we decided what to do next. 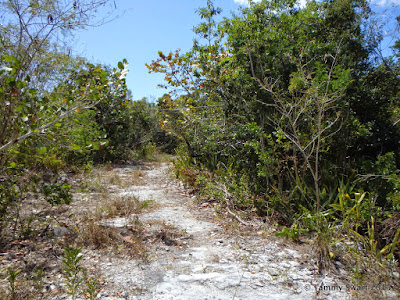 We had seen a lesser traveled path out into the brush where the road to the church turned left… we backtracked and took off down this dirt path.  The brush got thicker and the path became less evident.

Several times we ventured off the path where there looked like a footpath disappearing into the brush.  We found a cave entrance that was long and low.

It didn’t in any way match the description of the Crown Cave.  We stood on the rim of a sink hole peering down into the cave entrance…  trying to decide if we wanted to explore this unknown cave.

I think it was at this point that we both secretly decided that this cave exploration business was a bit over our heads.  Nobody knew we were out here.  Nobody would ever find us if we went inside that cave and mat peril.  There could be bats in there…!  Snakes!  Spiders!!!  I had no problem considering going into a cave where someone else had cleared the way before me… but this… maybe we had better continue on in search of the RIGHT cave.

Further up the strangely well worn dirt path, we found the ruins of an old stone building.  The brush was grown up around it and there was nothing left of what life there must have been there many years before.  We returned to the main trail and continued on until we found another foot-worn path leading into the brush.  This time we found a little bit “nicer” stone ruin.  Bruce went over and peered inside, finding an old propane bottle in the rubble.  This dated the place for at least the ’70’s or so when Bruce said propane was available in such bottles. 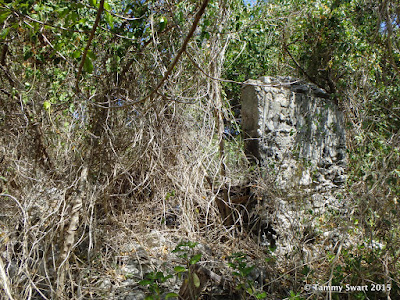 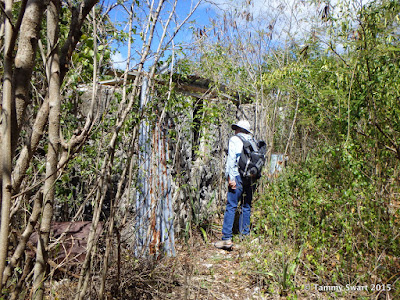 We were fast using up our last little bit of bravery as we continued along the pathway.  Just as we were considering turning back, we came out into an open clearing with a home and vehicles.  We were heading for the dirt road when a man appeared.  We spoke to him for a bit, asking about the cave.  He remembered it... but said there used to be a man who would take people there… he died.  His children might know the way but they’ve all gone to Nassau… He said that the paths had since all grown over and the cave was no longer accessible… It was a BUST!

I guess our instructions were a few years old…

We said goodbye and left by way of the caliche road towards the water, disappointed that we hadn’t found the cave… but not enough to go back and explore that NEW one we had found.  Besides, it was hot.  Time to get back to the boat and maybe go for a swim. 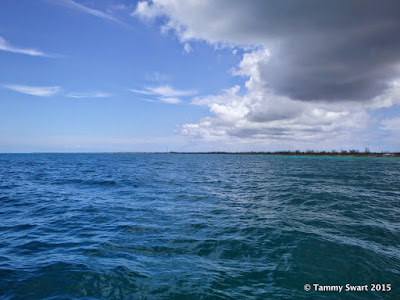 The tide was going out but our dinghy was still afloat.  Back on the boat, we were left with the entire afternoon and no plans.  The winds were still light but coming from the SSE which was rolling our boat quite a bit.  A quick look at the charts had us pulling up the anchor to move about two miles to the south where we found a small cove called Bennetts Harbor.  (N24°33.801’, W075°38.419’)

Even with winds from the SW, this little cove was more flat than the exposed western shore of the island.  It was very pretty with a white sand beach lining almost the entire cove.  There is a channel running off of the southern end that begs to be explored…. maybe there’s a dock there somewhere that will give us access to Bennett’s Settlement.  Maybe we’ll just sit right here on the boat and enjoy the gentle rocking and a sundown while a lazy lone dolphin hunts just off our stern…  We can explore tomorrow. 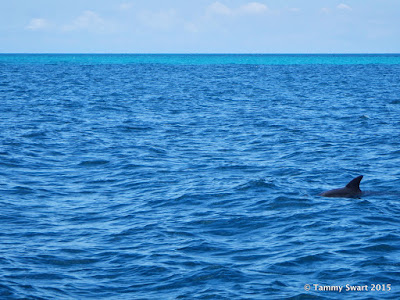