We pulled out of Fernandina Beach at about 8 am and motored neatly out the St. Mary's Inlet and past Fort Clinch...

with no pictures.  Our camera was lost for the entire day, not to be found until almost bedtime.  So, what pics we have of our first offshore jaunt in quite a while, will be from the iPhone and iPad...

Other than trying desperately to remember where we left the camera... our day couldn't have been more pleasant.  We did about 40 nautical miles with most of those being easy offshore.  We had just a breath of wind from NW and we tried sailing by bearing off course about ten degrees.  There was enough breeze to keep our full battened main up without floating it too much but we eventually gave up and just motor/sailed straight at our mark.

We saw not another soul after the shrimpers just outside of the St. Mary's Inlet.  We saw two huge turtles and several flying fish.  Jellyfish and a couple of dolphin were our only friends all afternoon.

Time passes at a different rate of speed when we're offshore.  Without the constant need to steer and maneuver, the mind goes off on a tangent, which somehow seems to make time pass more quickly as we gently rock and stare into the distance. 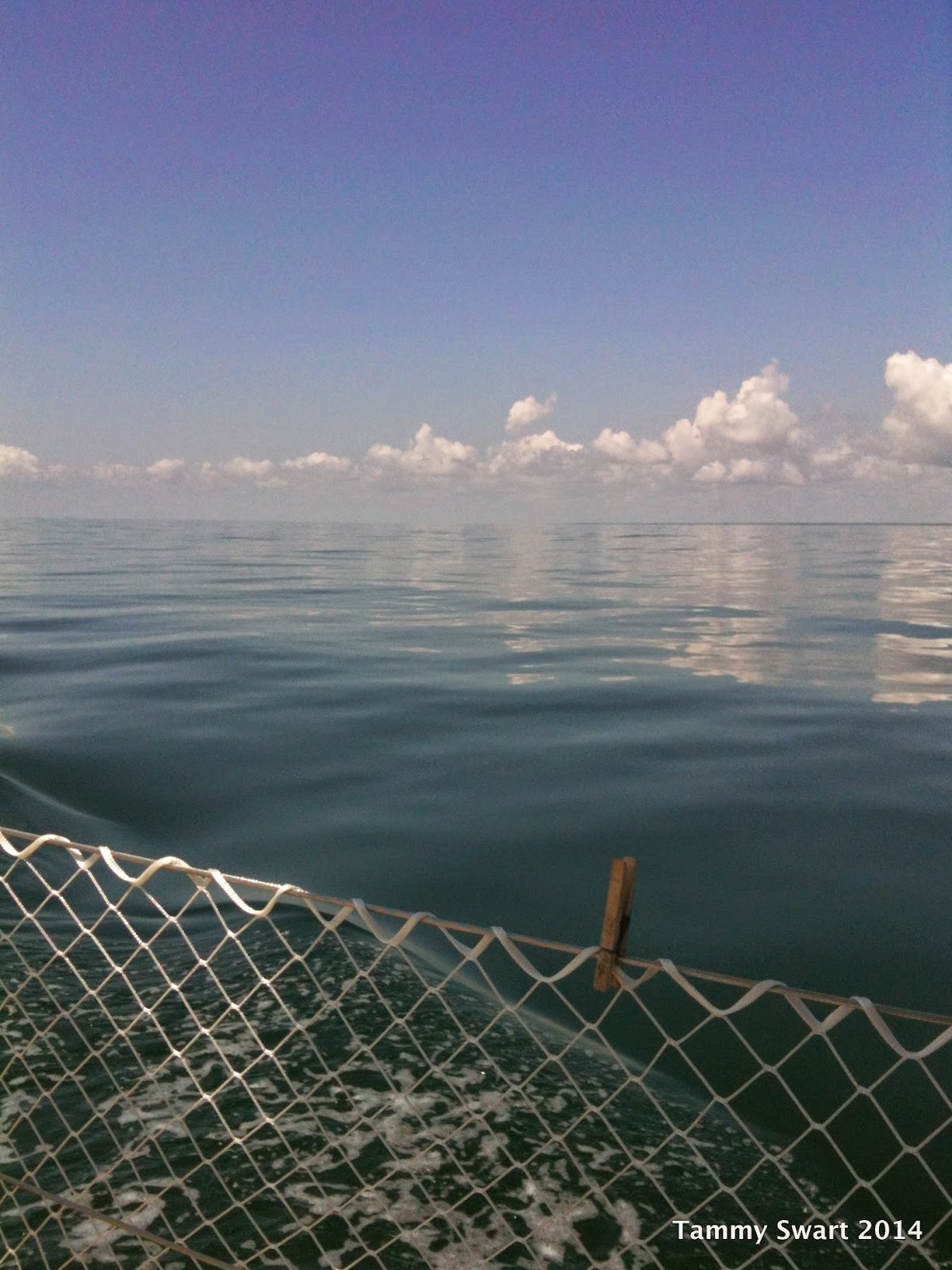 It was at some point during this Coastal hop, that we slipped quietly past a huge milestone in our Cruising Career... We passed the 2,000 nautical mile mark.  I knew it was coming, I should have paid closer attention... There should have been some kind of fanfare... but no.  It just came and went.

This day also saw the end of Florida, and the beginning of Georgia.  Although we won't be seeing much of Georgia yet... our plan is to skip through and come back in the ICW when it's cooler...

It seemed like only moments until we were in sight of the channel markers announcing the beginning of St. Simons Inlet and the end of our offshore hop.

The Channels leading to the inlets along this stretch of the East Coast reach out for miles into the Atlantic.  I've read everything I can find about dire warnings of shifting shoals in my research about these inlets.  There isn't much that I can find that tells you it's OK to hug the coast, but I want to shave off as many extra miles as possible.  In the end, we settled for a happy medium and hovered around the 30 ft. depth range and made as straight a course as we could, staying outside the "safe water marks" where they were available.

We I have a strong desire to limit the number of overnight passages we make, out of kindness to our feline crew members.  There are several inlets that seem to be navigable with minimal drama in good weather conditions.  So far, so good!

We've also been lucky with tides and currents both going out through St. Mary's Inlet, and coming back in via St. Simons.  The currents were slack/favorable at both ends.  Obviously I can't say that I had anything to do with this other than using the resources we have to anticipate this in planning our departure times.  I'm still learning but getting better.  I love it when a plan comes together.

We rode the swells into St. Simons Sound and easily spotted the navigational aids that would bring us into the unimpressive Frederica River, which would be our home for the night. 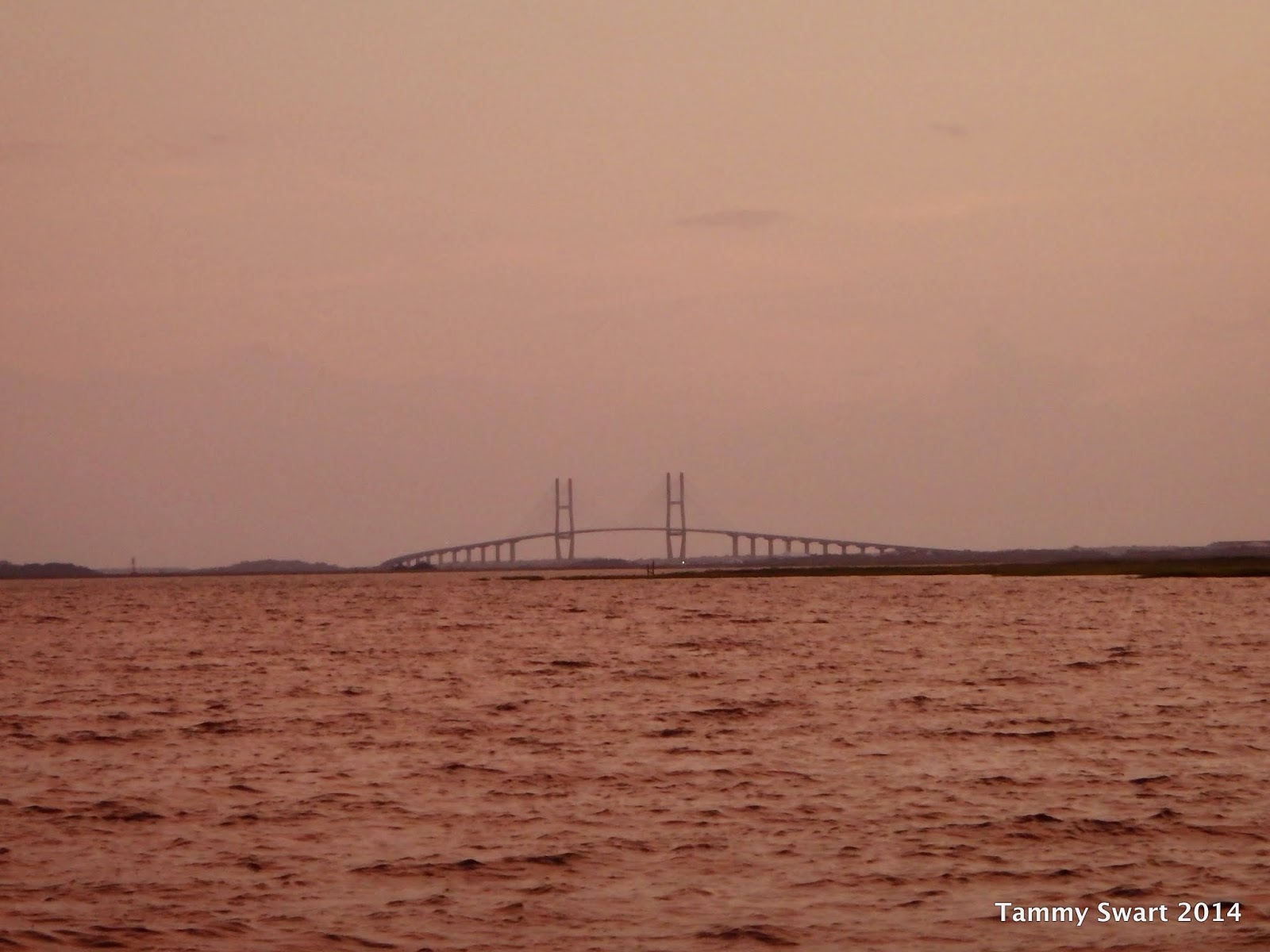 In the morning, we made contact with the friendly folks at Morningstar Marina Golden Isles.  If these guys are any indication about how friendly the people in Georgia will be... we may be sorry we're skipping through so quickly! 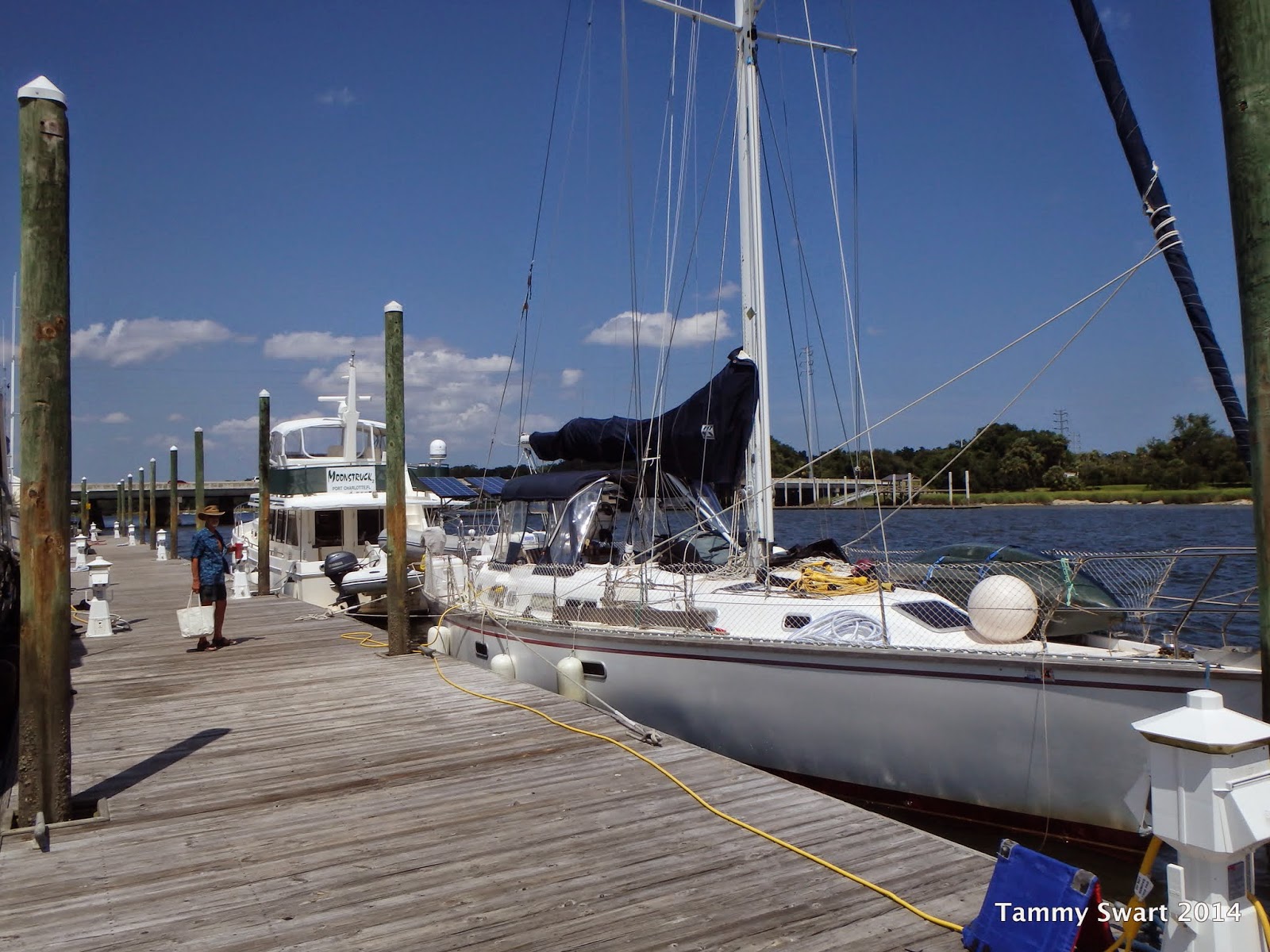 We were directed to tie alongside the long transient dock and Buck was there to help us with the lines.  We came in early morning just before incoming slack tide and got settled.

Why are we here?  Oh yeah... we need to pick up a new range for the boat.  Since we bought the boat, we have had one burner that burns yellow, indicating improper air/propane mix.  We've just been avoiding that burner but now have a second one that we can't use for the same reason.  We spent some time on the phone with the makers of our range, and followed their instructions for cleaning the jets and such... but instead of improving the situation, it seemed to get worse.

The parts inside the stovetop were corroded and rusty, so we decided that we would just order replacements.... but when we started "adding to cart"... I got nervous when we topped $500 (half a boat buck)...   At this point we reasoned that we could replace all of these parts, and still have an old range.... Or - we could spend about twice the amount and have a whole new range.  While we were in Fernandina Beach, we called ahead and placed an order to have a new one waiting for us at the cute little West Marine Express in Brunswick.  And Morningstar Marina is about five minutes away from West Marine... and they have a courtesy car!!! 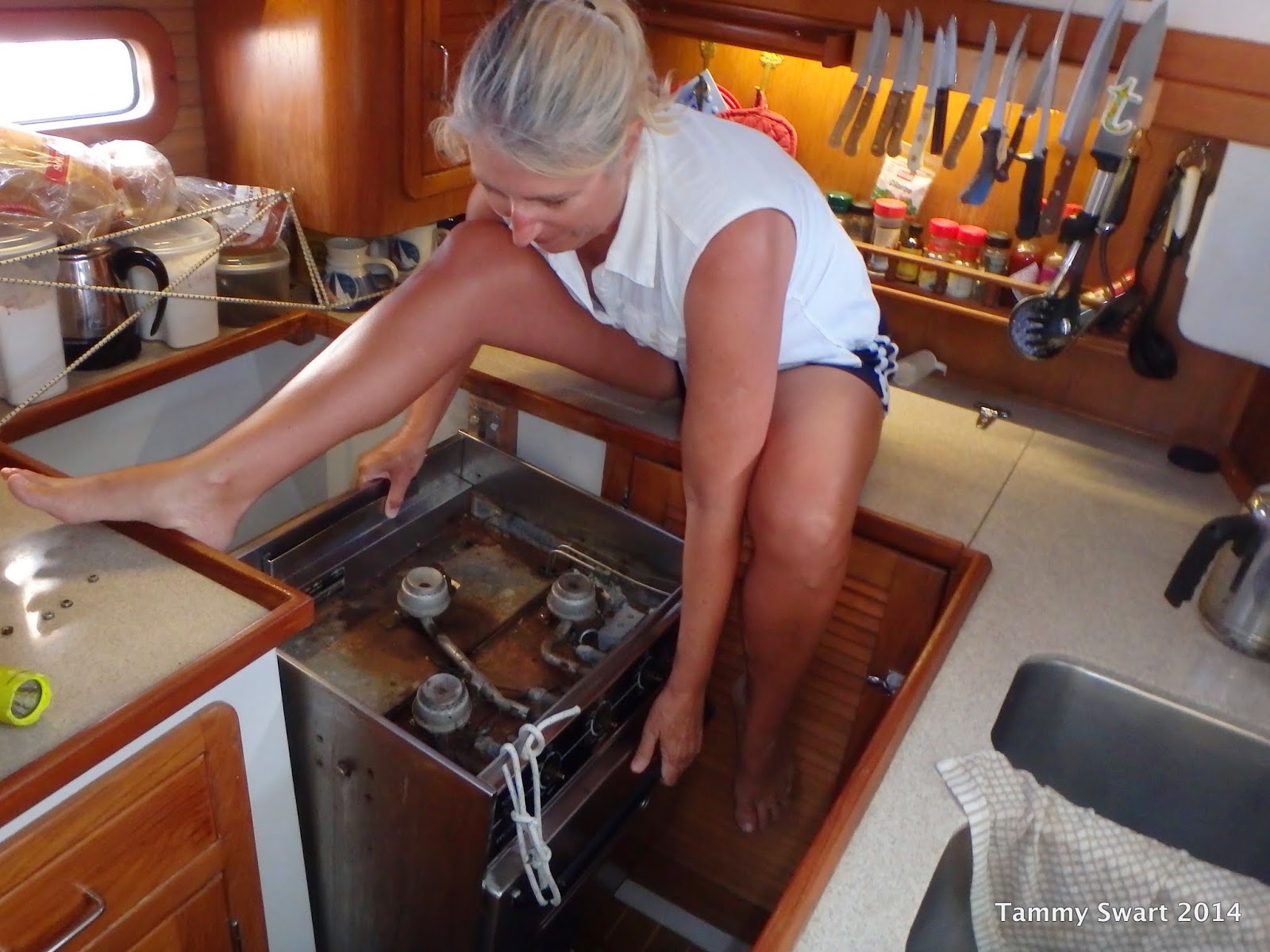 So... upon arrival, we spent the morning figuring out how to get the old range out of the boat.  We had measured the companionway and thought we could just get it through.  But with me recovering from a recent bout of back pain, how would we get it OUT! 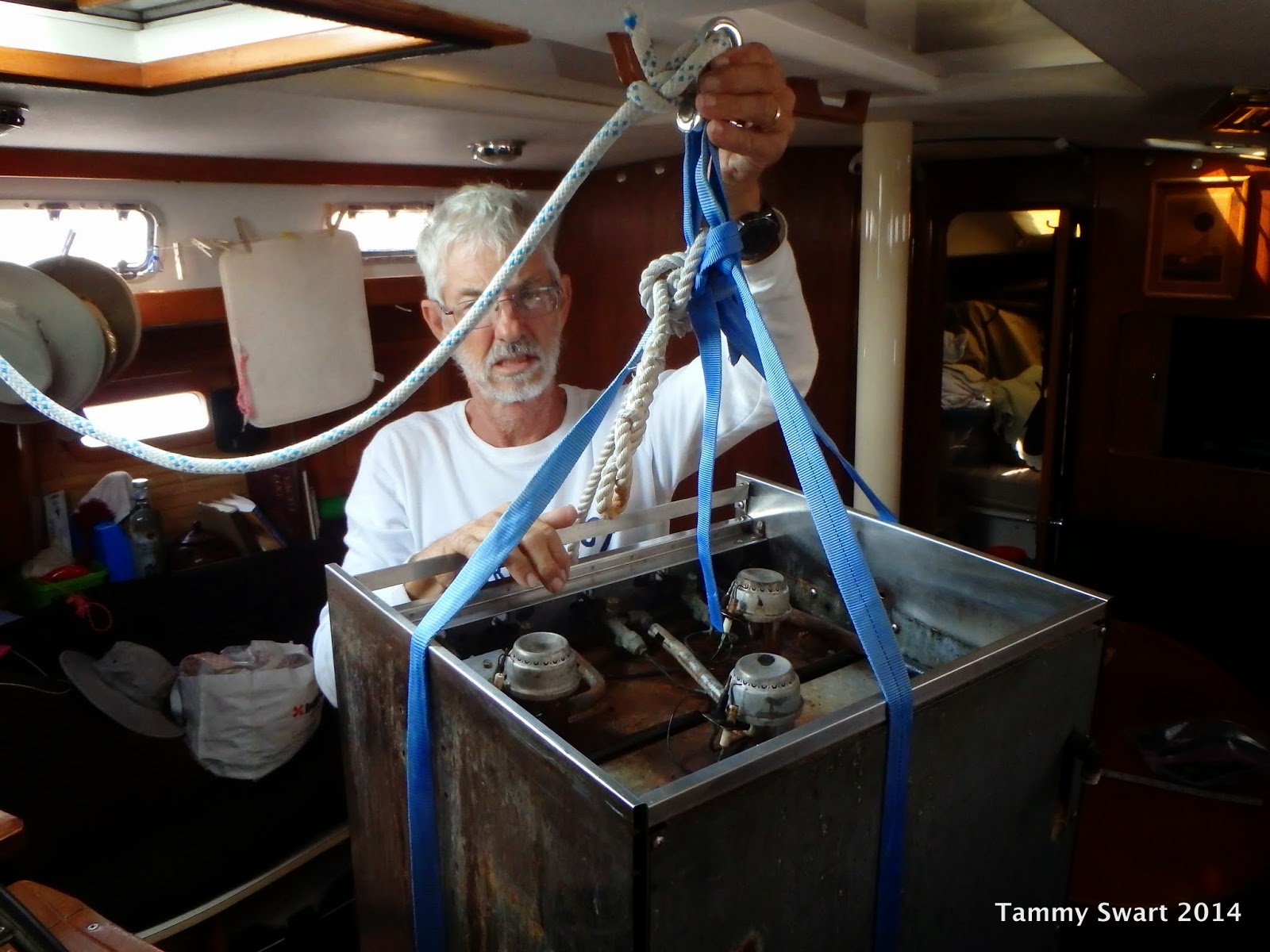 There must have been some sort of magic involved, because I was just messing around with it and suddenly I had it off of its mounts and onto the floor!  We lifted it onto the countertop, rigged a makeshift bridle for it and attached it to a halyard... 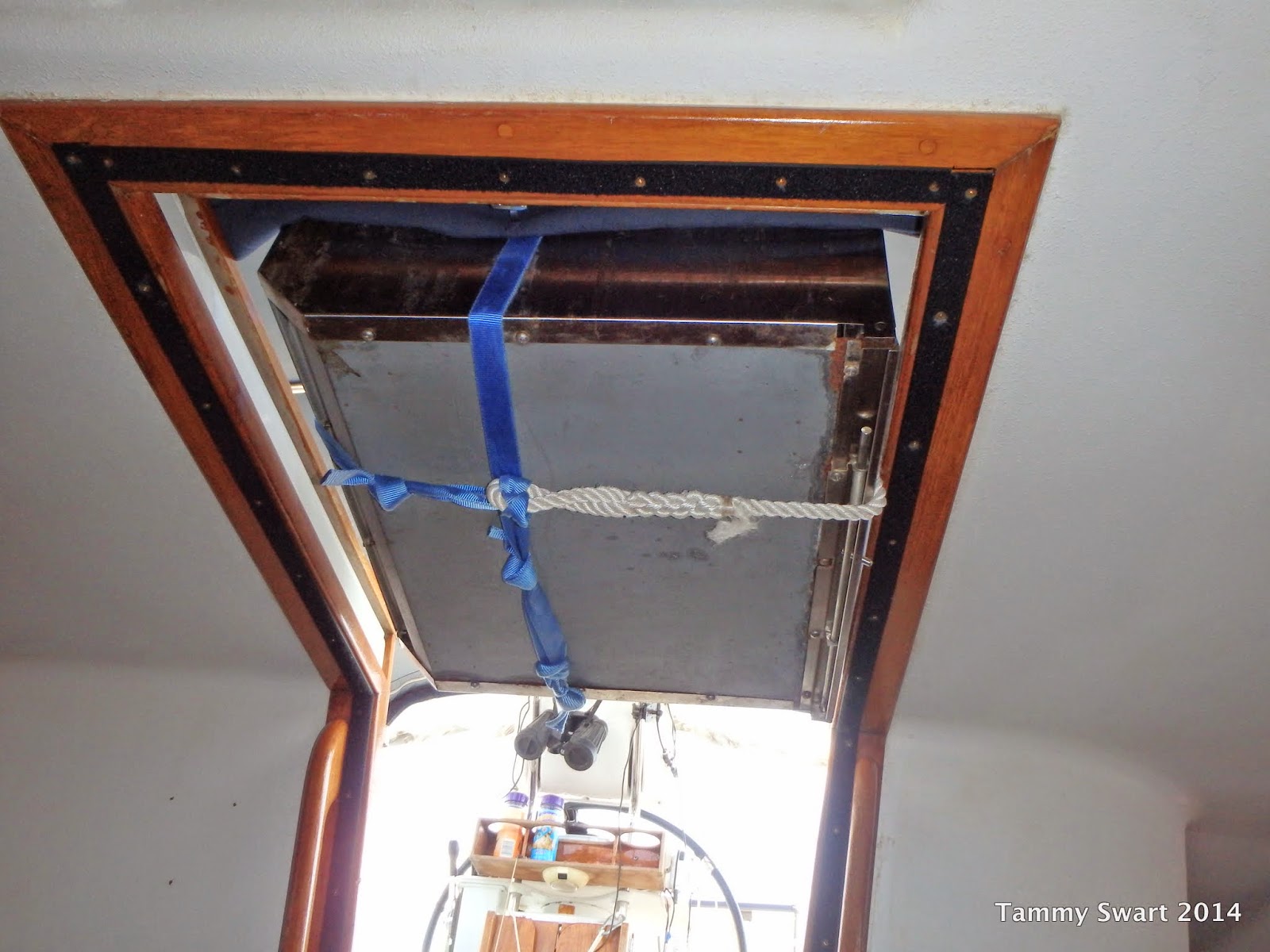 I went out and cranked the wench while Bruce guided the big thing out through the companionway... 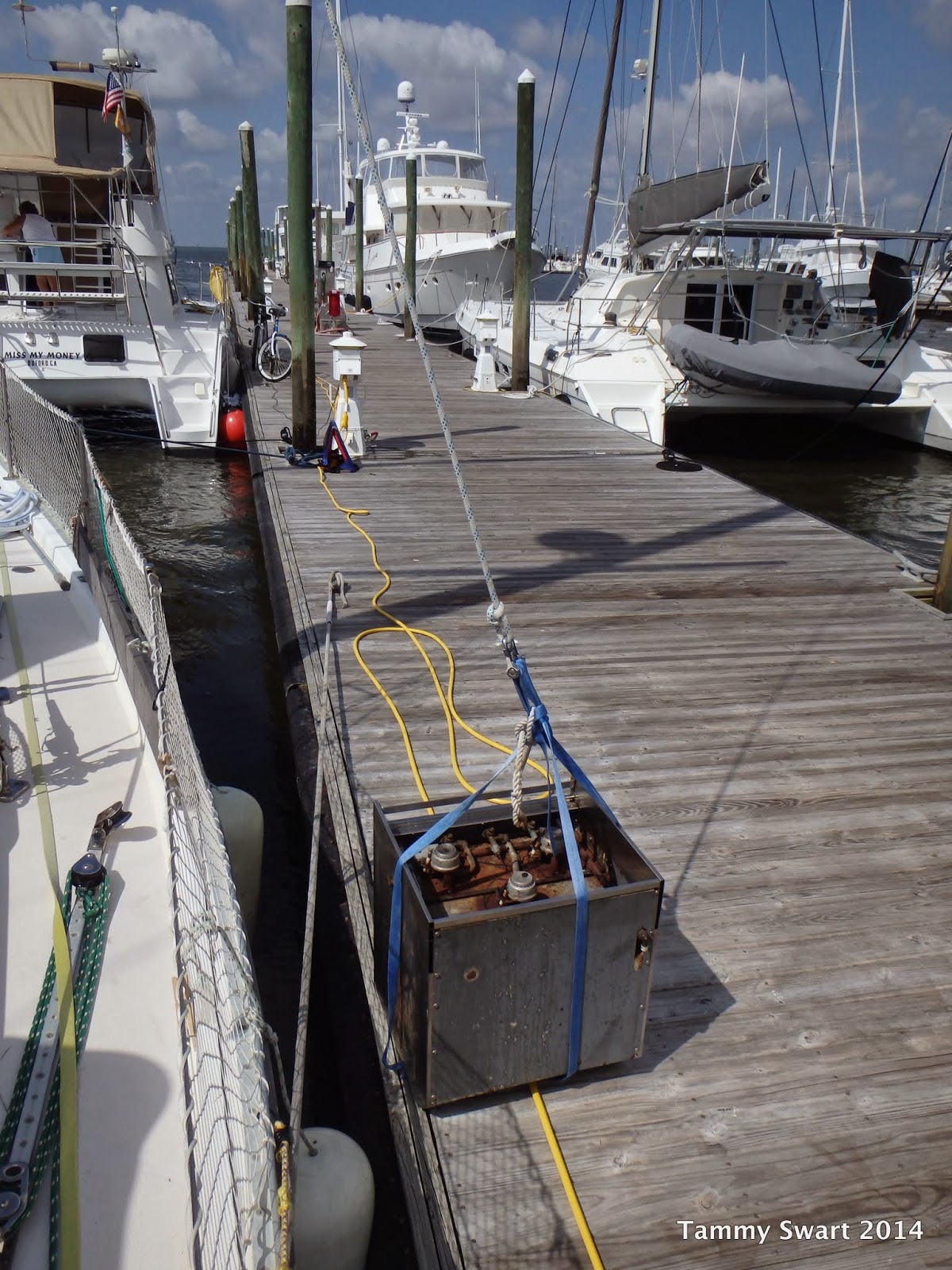 And then we just guided it over the side, where I eased it down to the dock.  Using the halyard to lift this thing instead of us trying to wrangle it the whole way probably saved our lives AND our marriage.  It was TOTALLY easy! 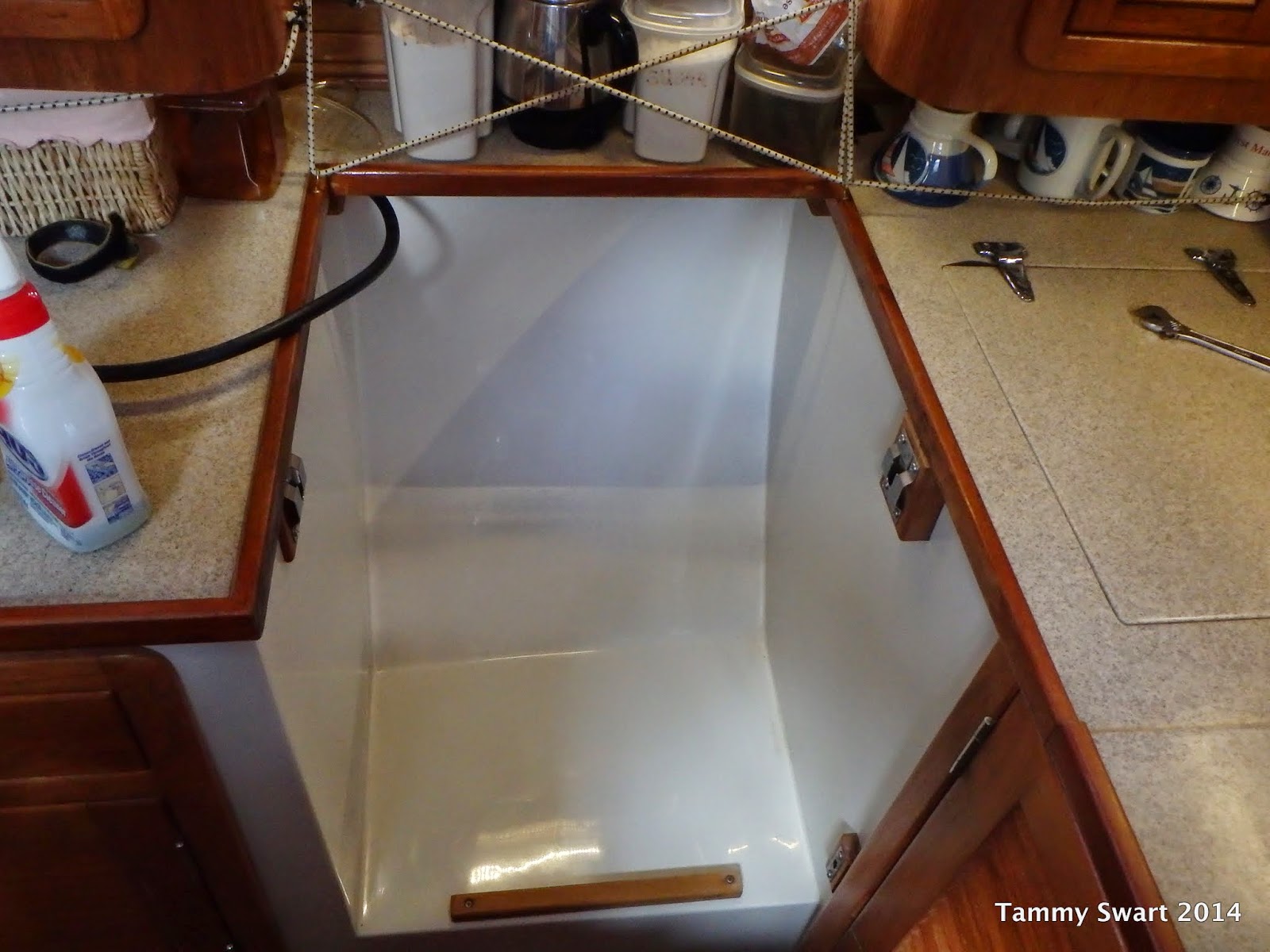 I rushed back down below to see what kind of funk was uncovered by the departing range... There are "places", dark mysterious places, that I haven't been able to reach to clean... that were now exposed!

I cleaned it all up and was gratified to find that it wasn't nearly as bad as my mind had made it.  Now we have a nice sparkling spot for our new range to live! 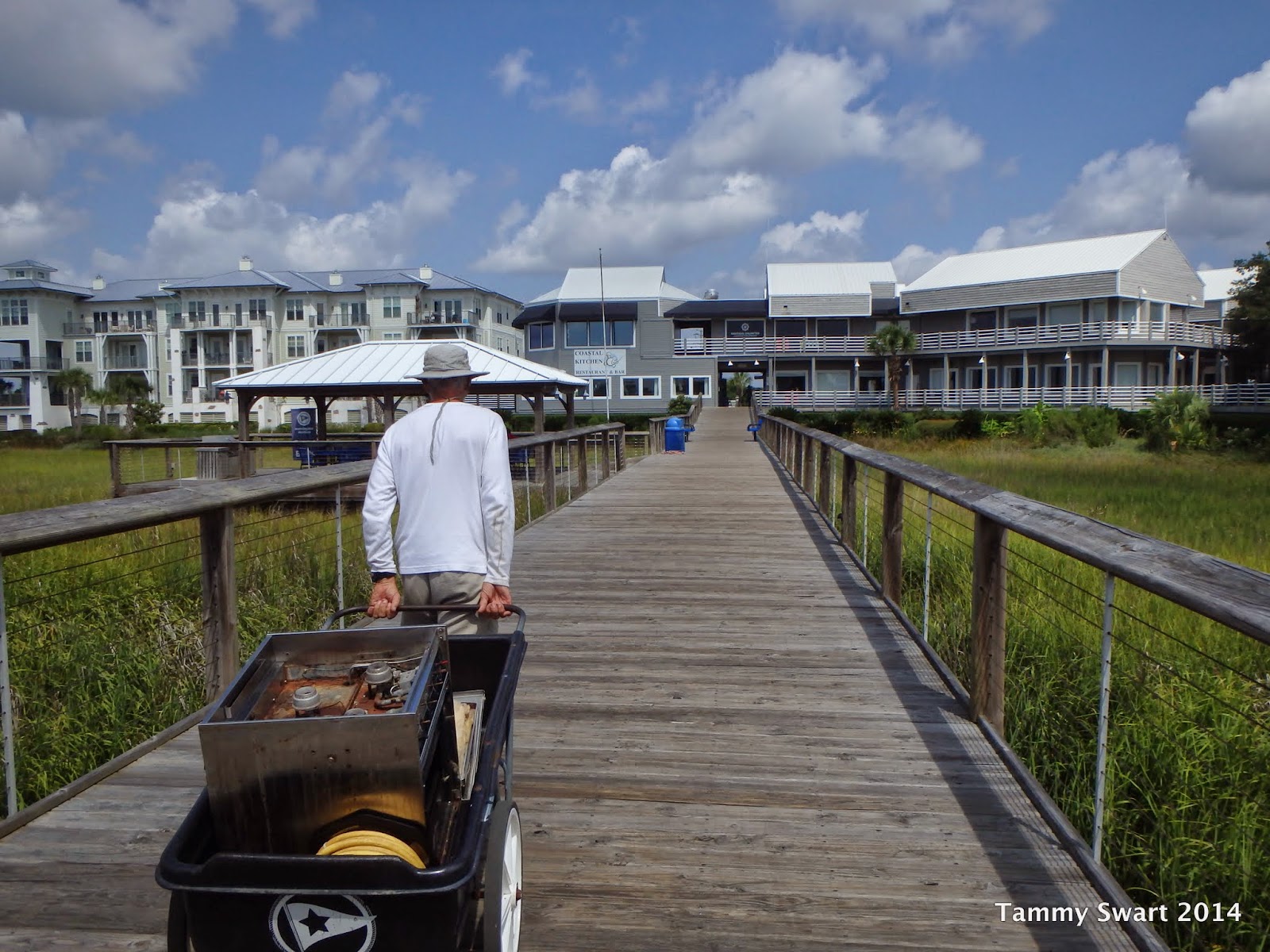 We rolled the old range, that now looks much worse than it did while it was in my house... to the nearest dumpster and said goodbye! 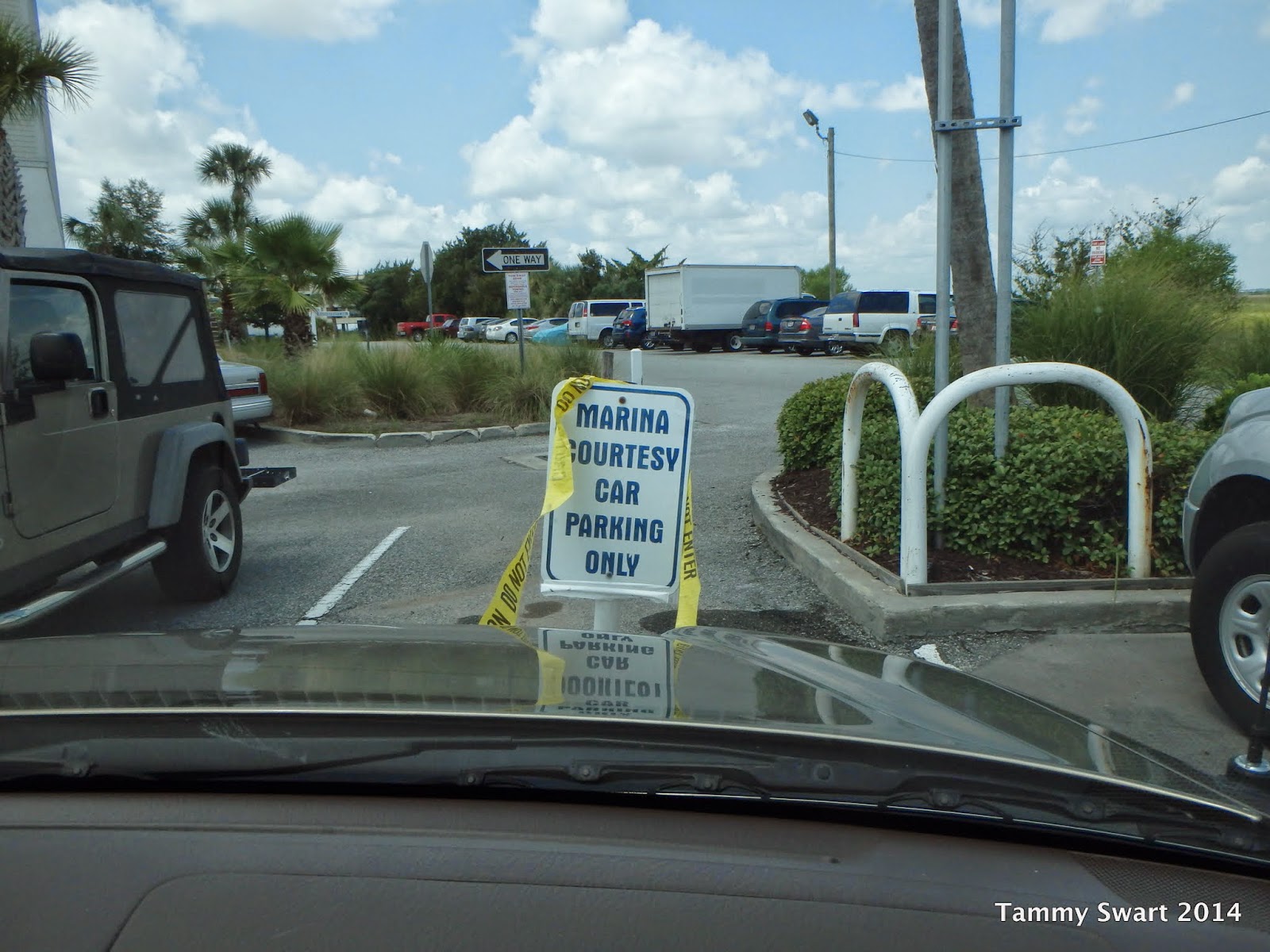 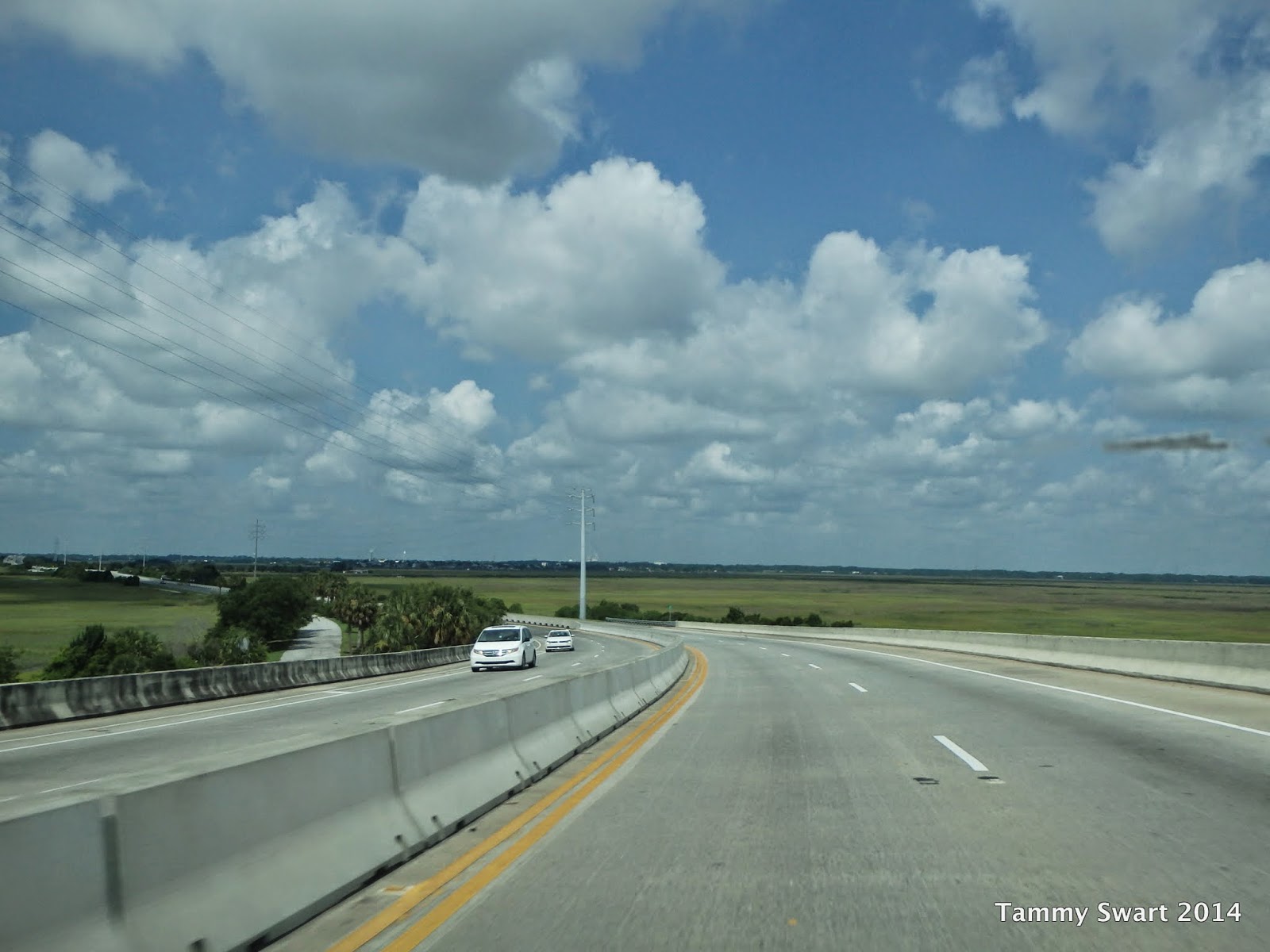 We are new fans of the Courtesy Car!  We took this nice little truck over the bridge to the mainland.  It felt so strange to be just zipping along in an automobile through unfamiliar marshy lands.  This life is just so wonderful if you like never knowing what's going to happen to you next!  It's like having your own personal time warp machine...

So anyway, we picked up our new range and the folks at West Marine acted as if we were their ONLY customers this week!

We popped into the grocery store on our way back to the marina and still got back within the hour. (love the small town)  It seemed as if our fears that we might not get finished with this project in one day  were unfounded. (but best not to count our chickens before they're hatched...) 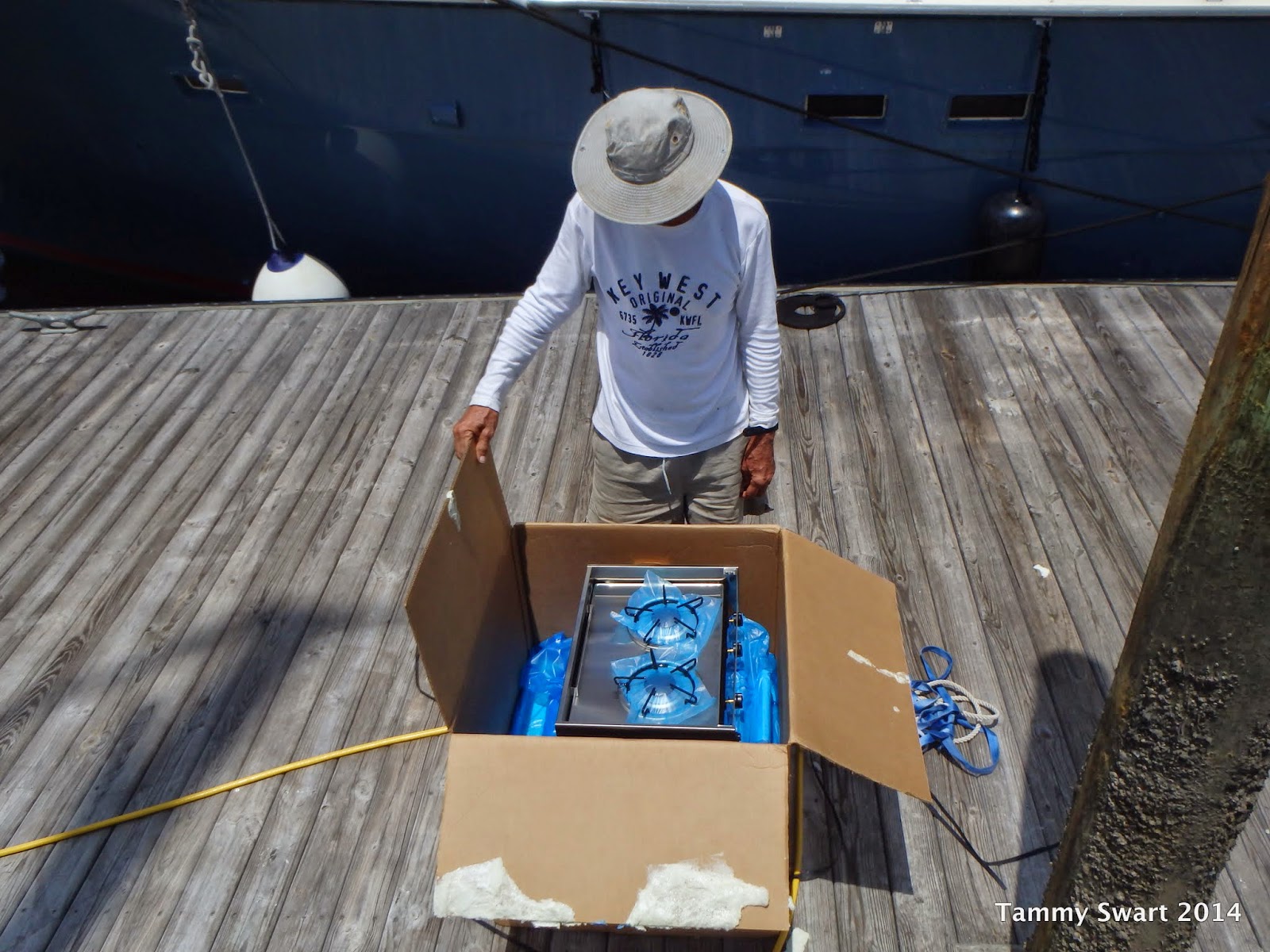 We had a little help from some other Cruisers on the dock when we got back to the boat and unpacked the new range.  It took us about 15 minutes to get the range into the boat and installed by slipping it easily onto the existing mounts from the old range... with help from Dave and Steve!

We lucked out that it was just plug and play.  We used teflon tape to prep the propane connection and screwed it on. 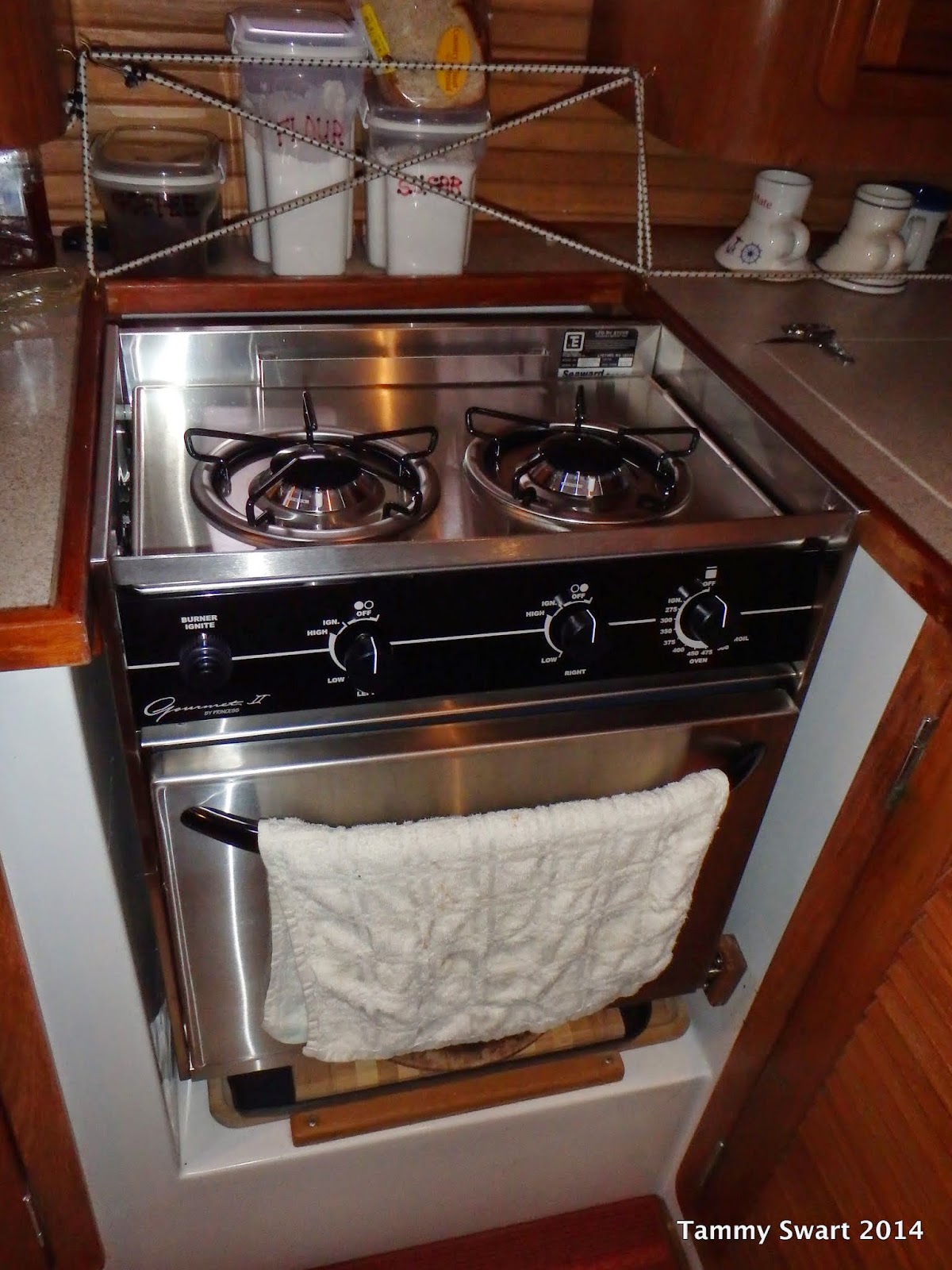 Bruce tested the propane line for leaks and we were done!  We gathered around the new range and followed the instructions for lighting the flame.  It is different from our old stove... A few breathless moments waiting for the propane to fill the lines... and voila!  We have fire.  And the oven lights like a dream!  No more standing on my head with my hands twisted like pretzels to light the thing!

I've used it now and it seems to be fine as far as maximizing the cooktop.  However, what I didn't realize was that the oven space would be smaller.  The new range is less deep from front to back than the old one.  This is most evident in that my pizza stone won't fit inside now...  So, I'll adapt...  On the bright side, I can feel the additional space in my galley.  You wouldn't think it would make an appreciable difference, but it does.  Overall, I'm happy with the new range and it cooks like a dream! 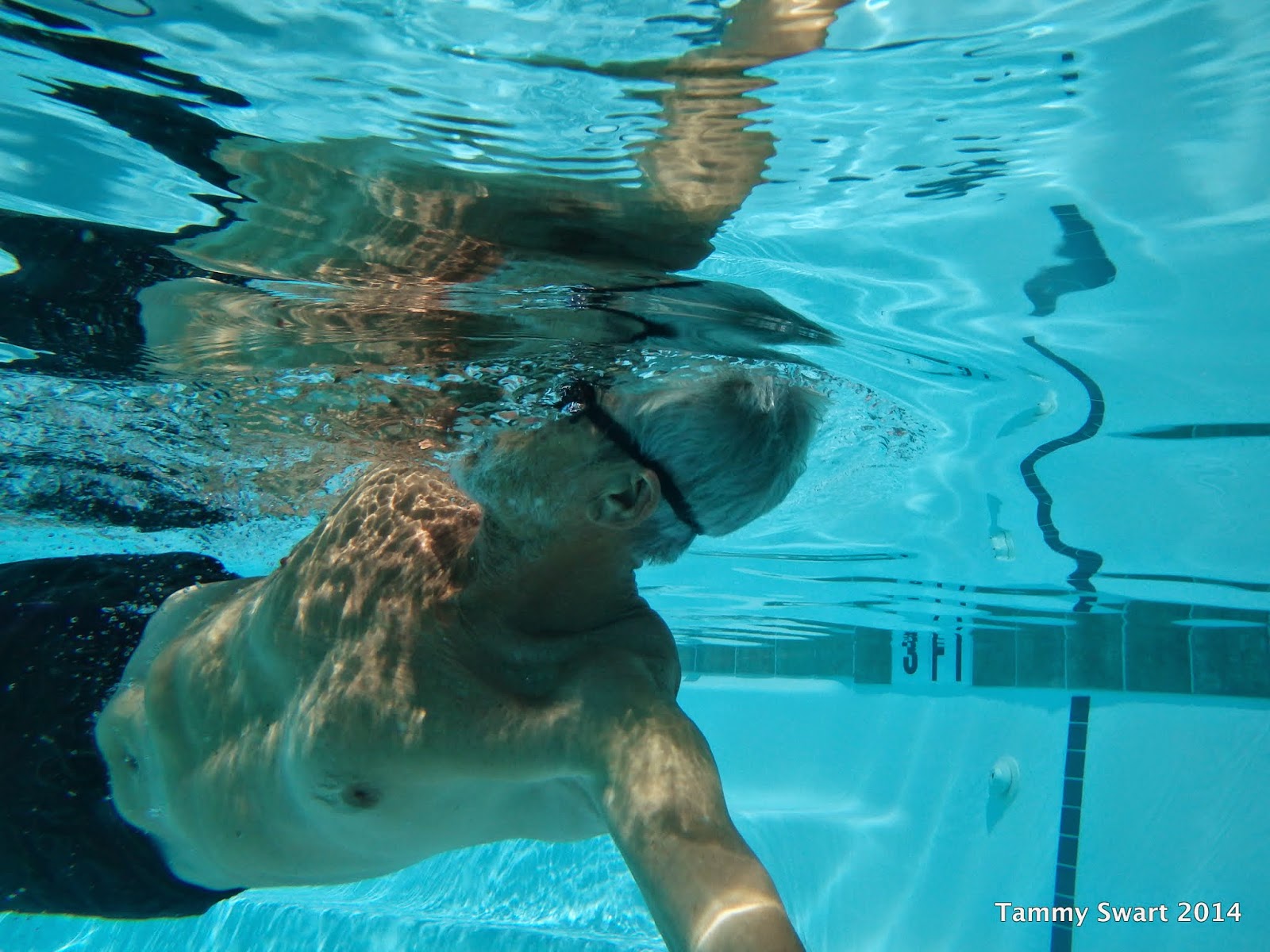 We were done with our project and had all the mess cleaned up by 2:30 pm.  This left the whole afternoon to take advantage of the POOL! 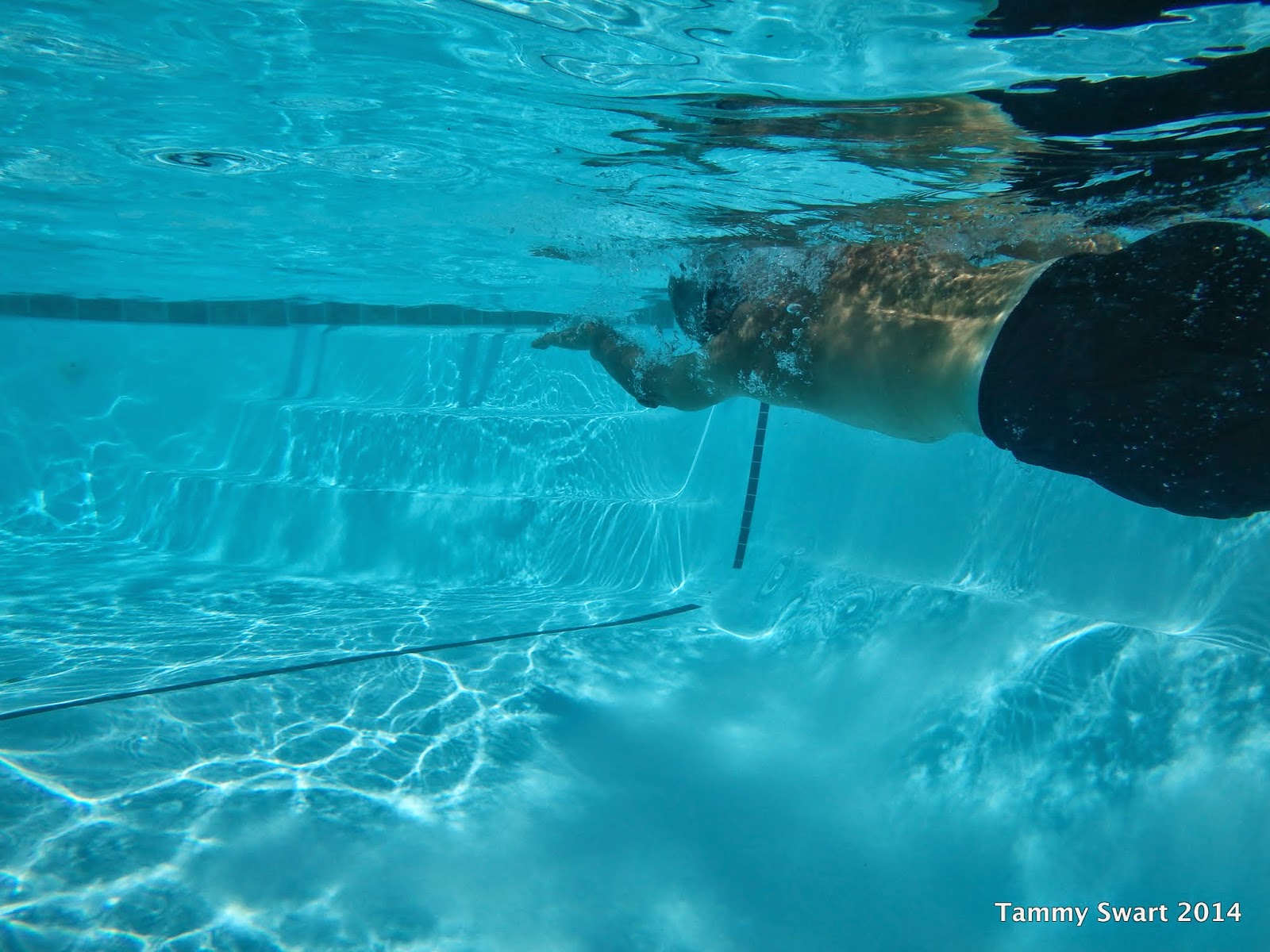 Bruce tried to get a workout in this tiny pool.  I counted strokes... he can get TWO!  So after a few "laps", he gave up and relaxed... 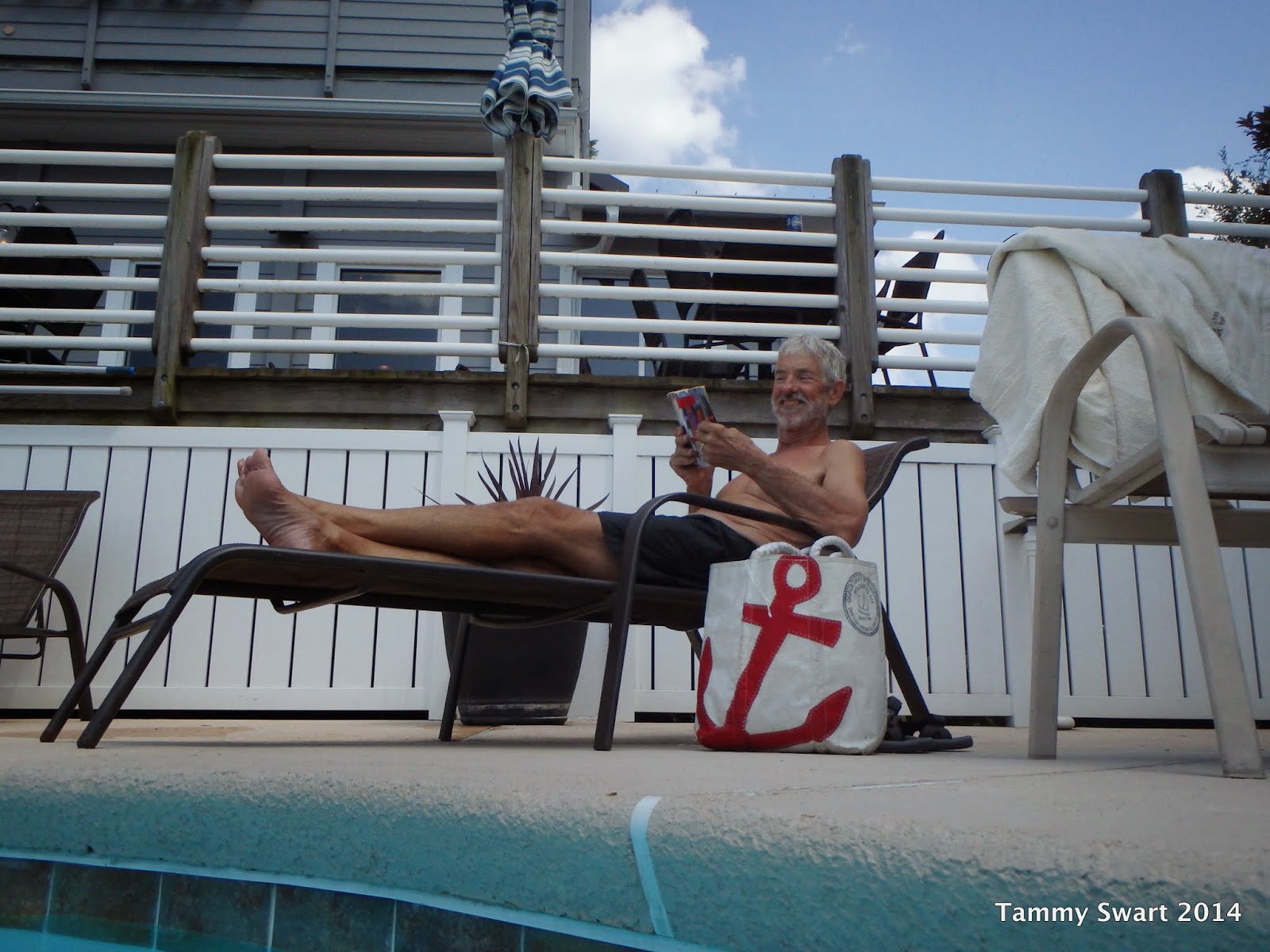 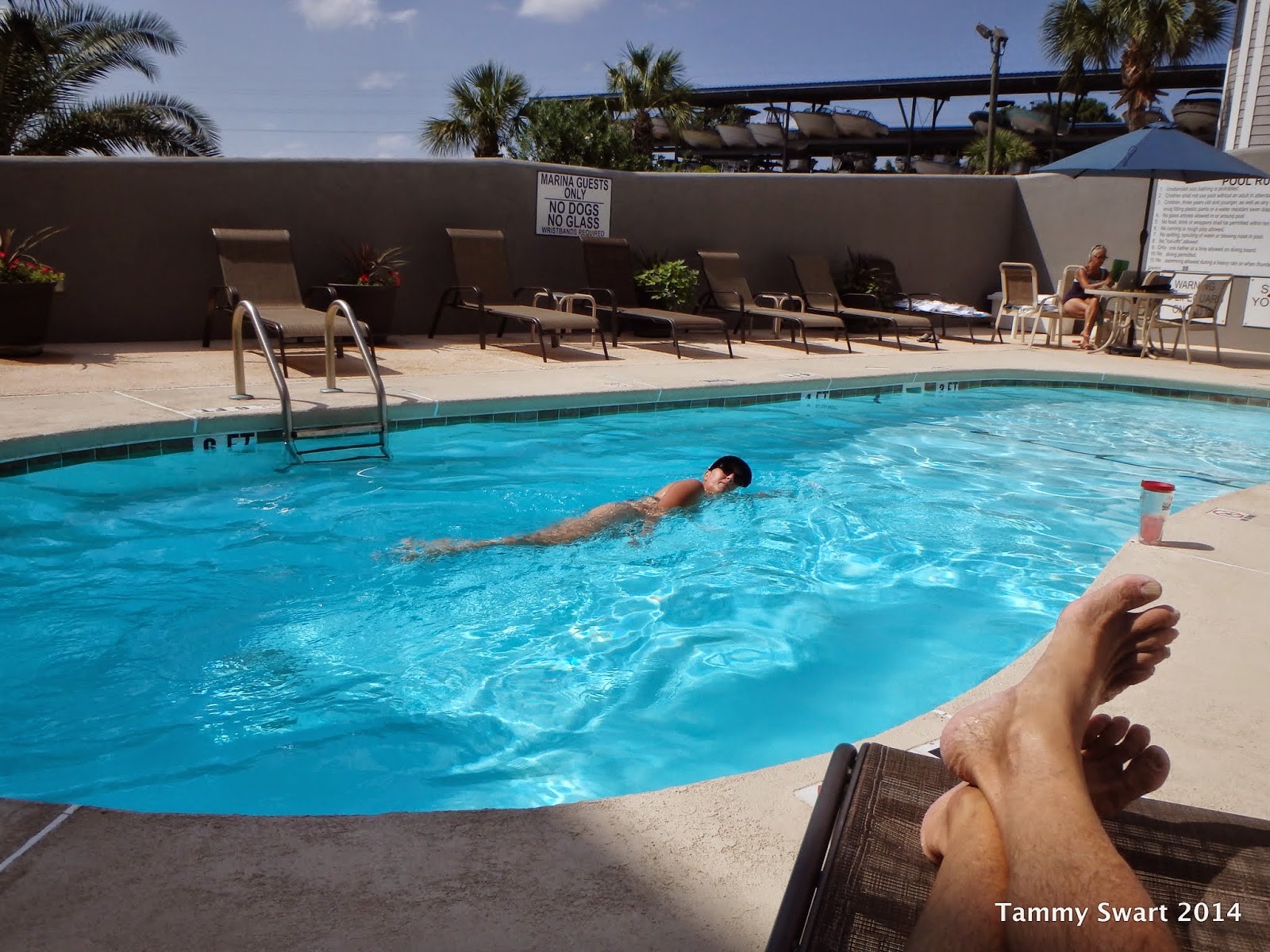 I can actually do several laps in my uneducated way...  I swam until my toes cramped up... about 10 minutes...

We spent the afternoon enjoying the cool waters and chatting with other Cruisers. 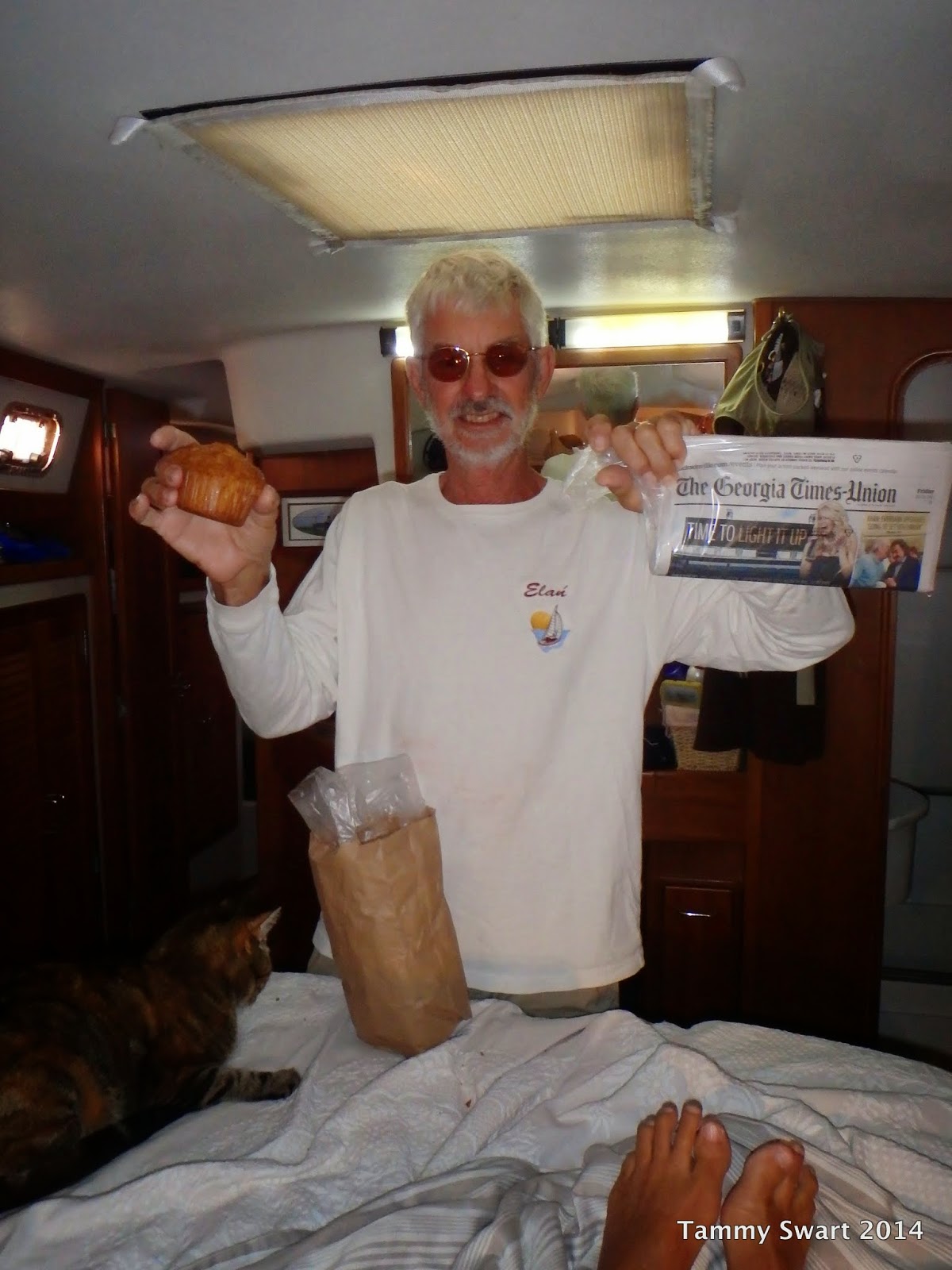 Our brief time in Georgia was coming to a close.  Our mission was completed and we moved on in the morning...  but not until after we found the morning paper and a bag of fresh muffins at our doorstep!  AWESOME!  Perfect quick pre-departure breakfast! 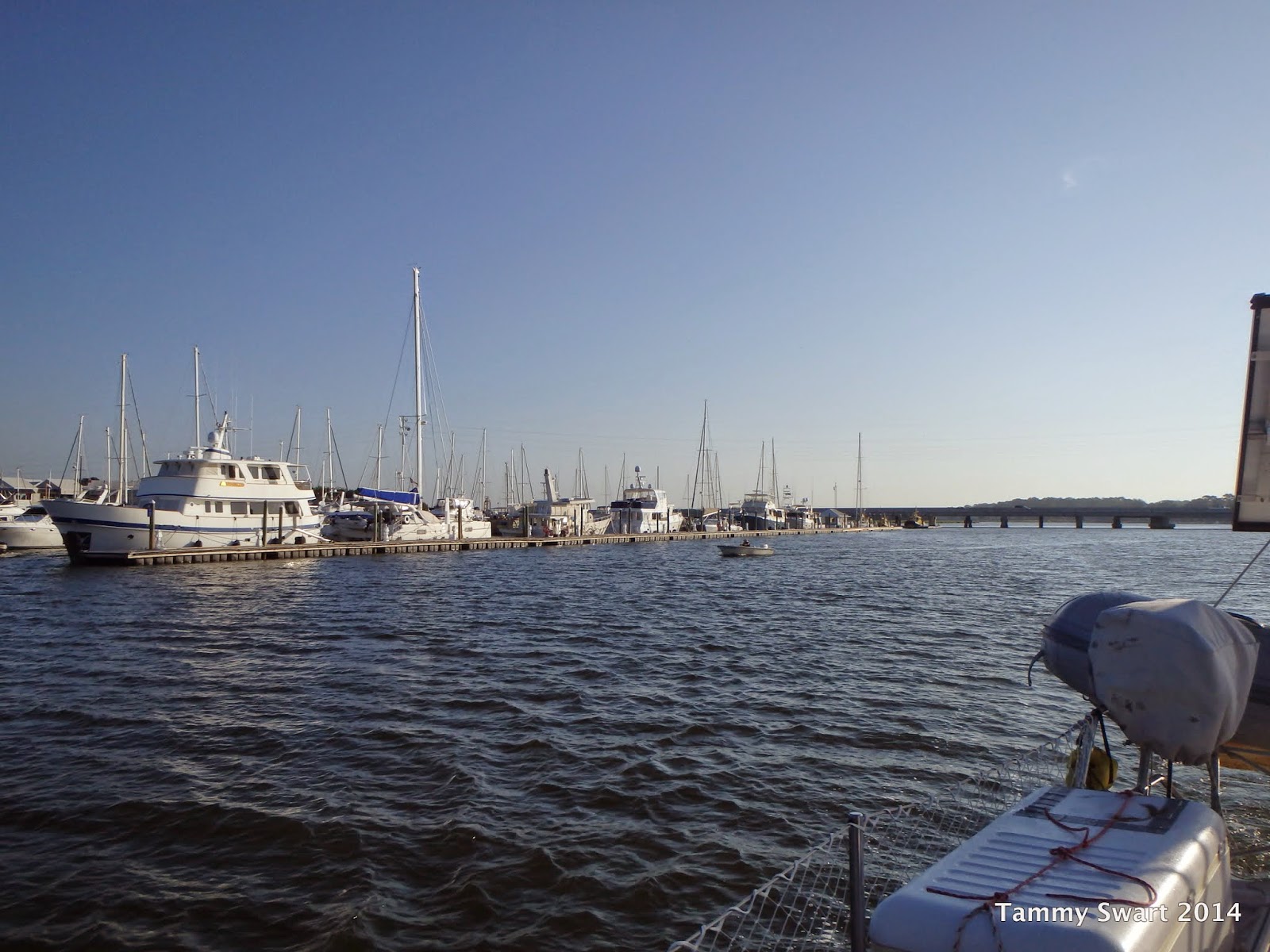 We left at slack tide, waving goodbye to the Morningstar Marina!  We will be back!