A Little Hole In The Walberg 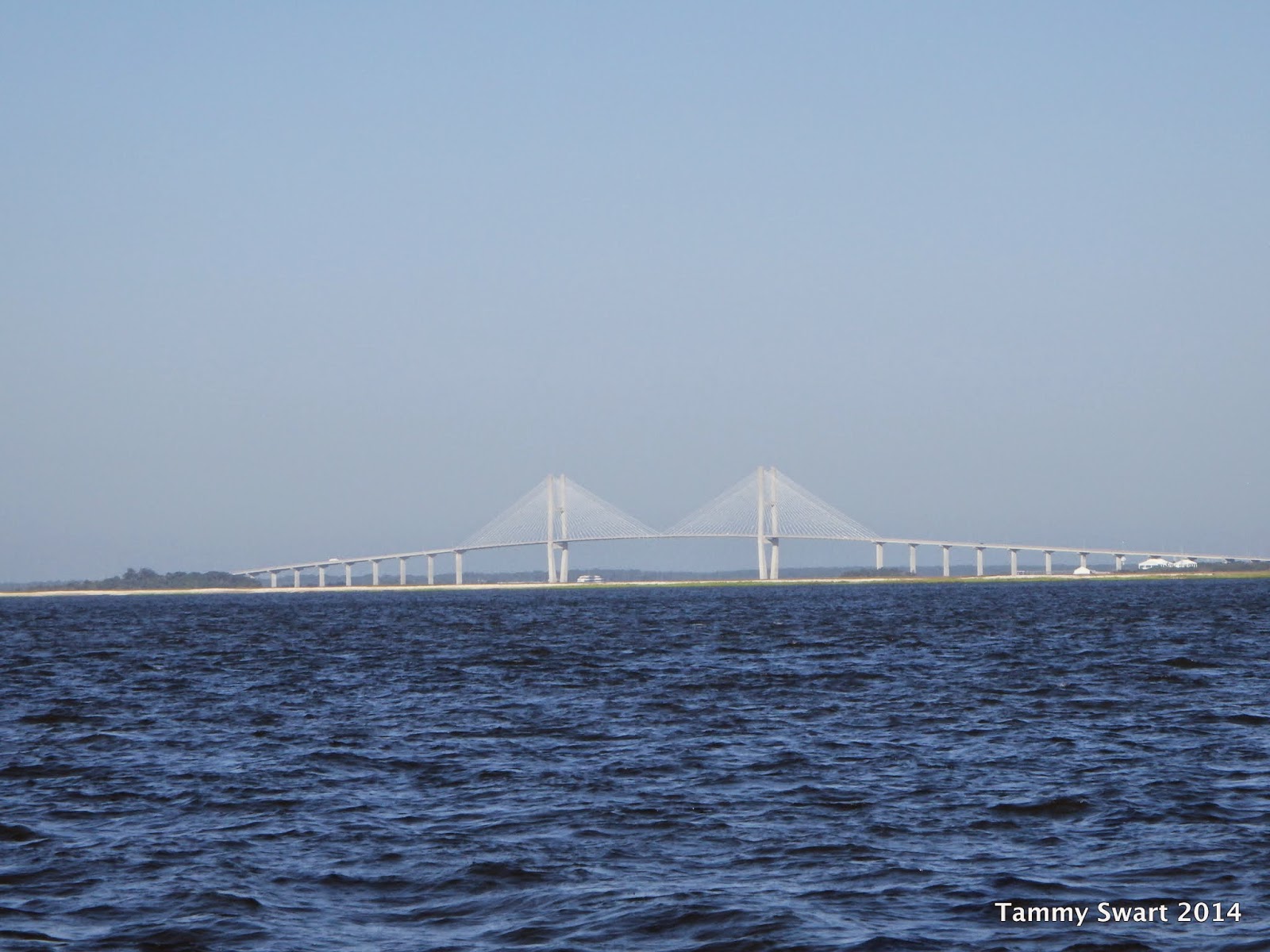 We left Brunswick GA after two nights, on the high tide.  I've read warnings of some skinny spots at the entrance to the Frederica River, but as we had no problem getting in at low tide, I had no worries about getting back out...  Maybe we're getting brave, or maybe we're getting just the teensiest bit cocky... but our experience has been that much of the doom and gloom I've read about so many of these places has been unfounded.  I'm really trying to continue my vigilance and not let my guard down, but the loss of some of the fear is welcome.  I'm pretty sure my husband would say that I still harbor more than my fair share of caution... 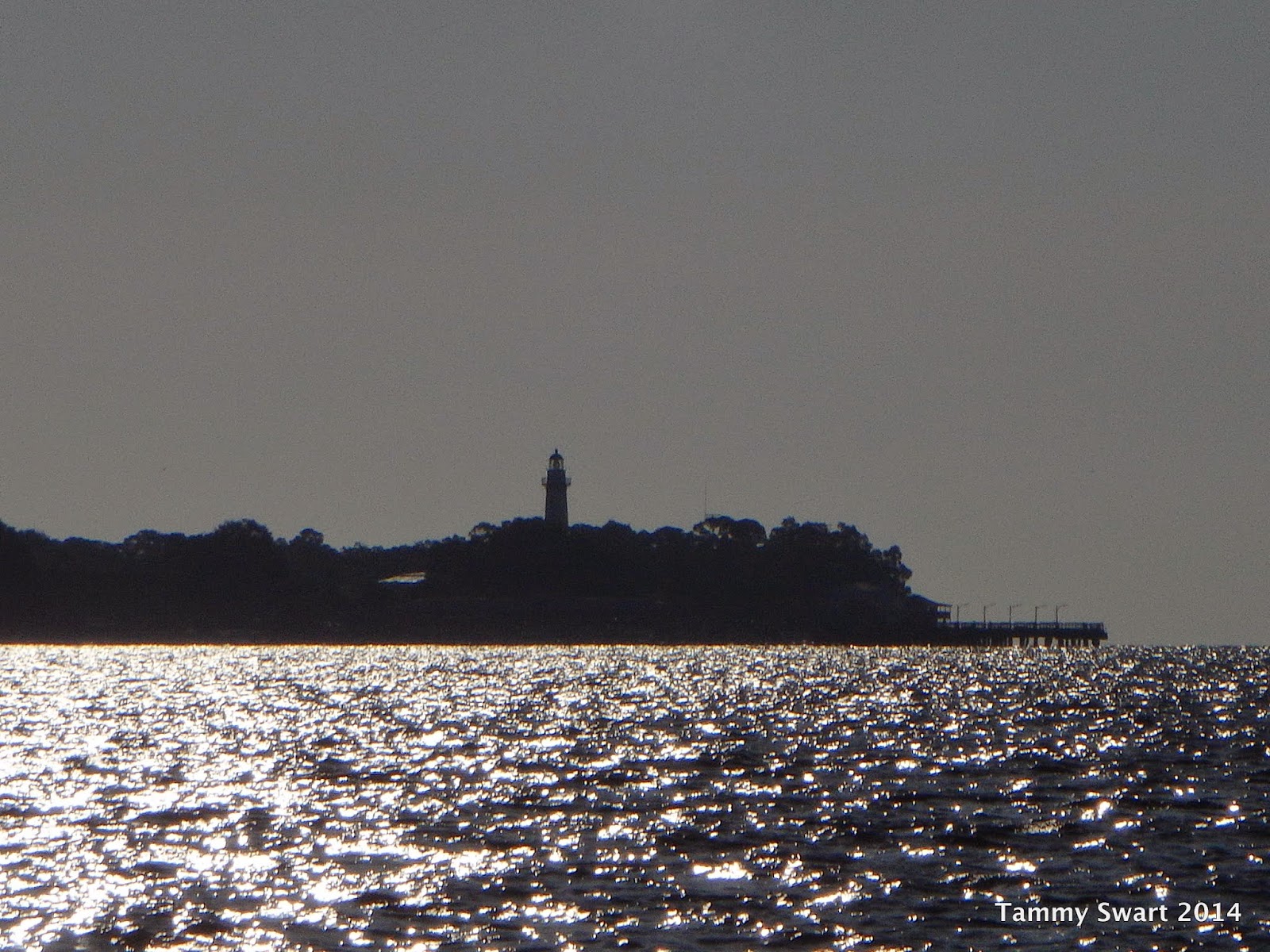 It was a gorgeous morning.  We raised sails, at my urging while still in St. Simons Sound.  The St. Simons Lighthouse stood guard in the early morning sunshine as we passed by,  riding the gentle swells...

The dredged channel leading us back to the Atlantic is more than six miles long and the swells increased the further out we traveled. 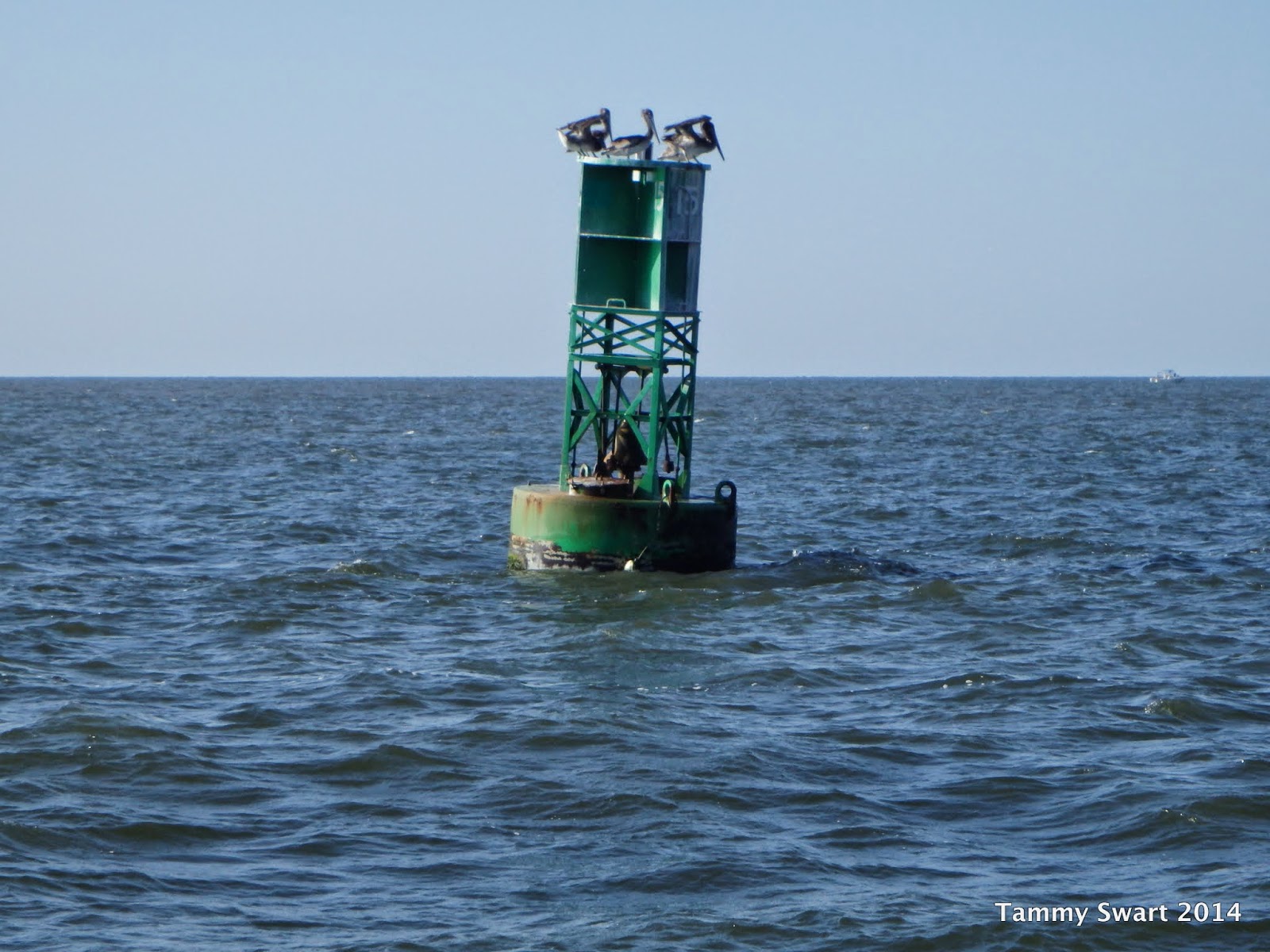 The sails helped to keep the boat from rolling too much, but when we finally reached the point where we turned Northward, we were rocking and rolling. 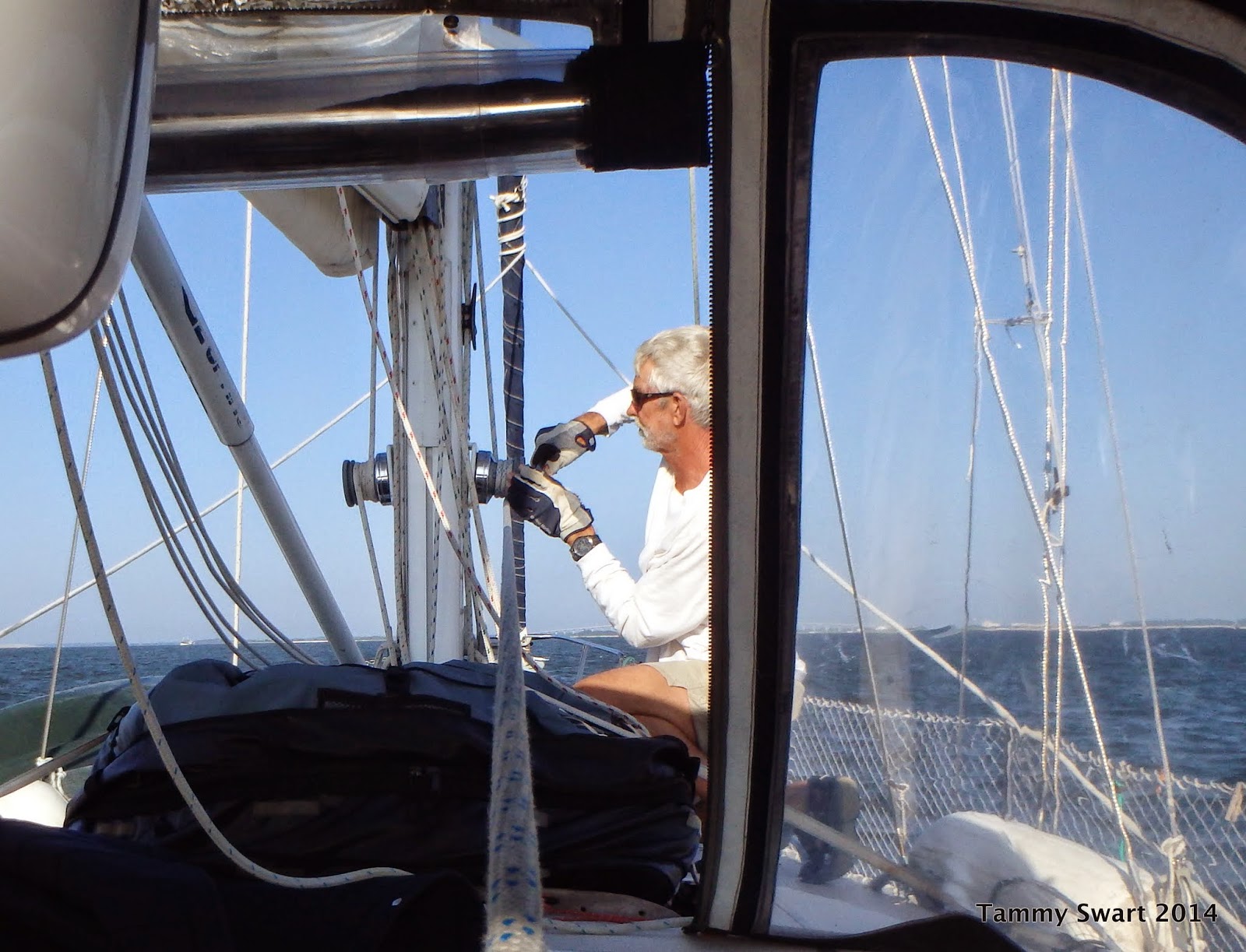 Bruce was busy trimming sails while I brought us around to our course.  Once we were settled, we realized that the winds were just too light and dead on our stern for a comfortable ride.  We tried rigging a preventer to keep the mainsail from flopping when we surfed down the backside of a swell...  We had to keep the engine running to make any kind of speed... Just our luck! 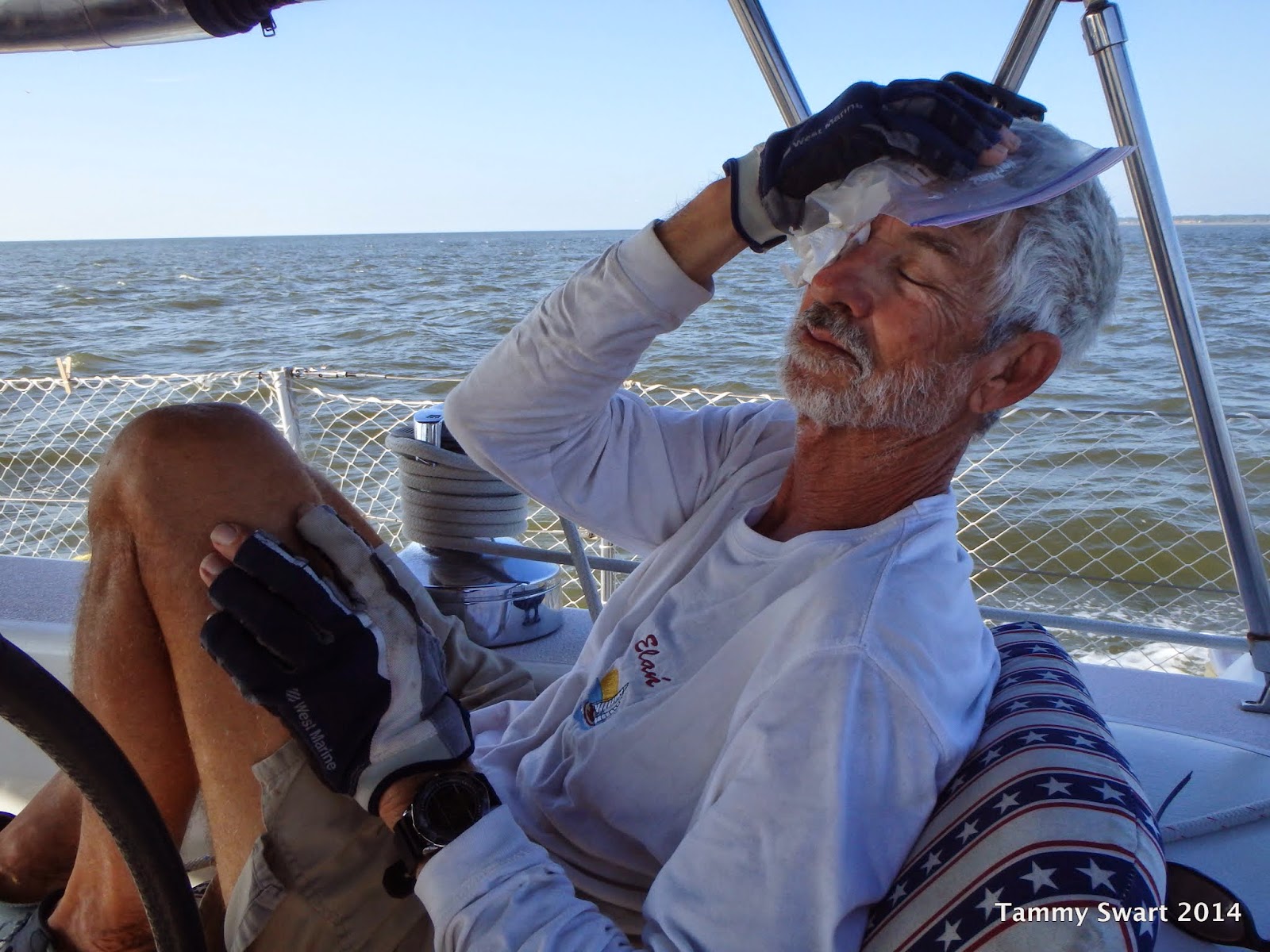 After a while, the winds dropped even further and went further south.  It looked like it was time to jibe the main.  We had already rolled the jib and the winds felt like nil.  Bruce came back to center the traveler so that he could manually bring the mainsail over... and BOOM!  The main came over on it's own!  I guess technically this accidental jibe was my fault... I should have been watching the sail instead of watching my husband.  Or maybe he could have had his face out of the way of the mainsheet... so it was perhaps a joint effort.  Whichever way you look at it... I had BROKEN my husband! 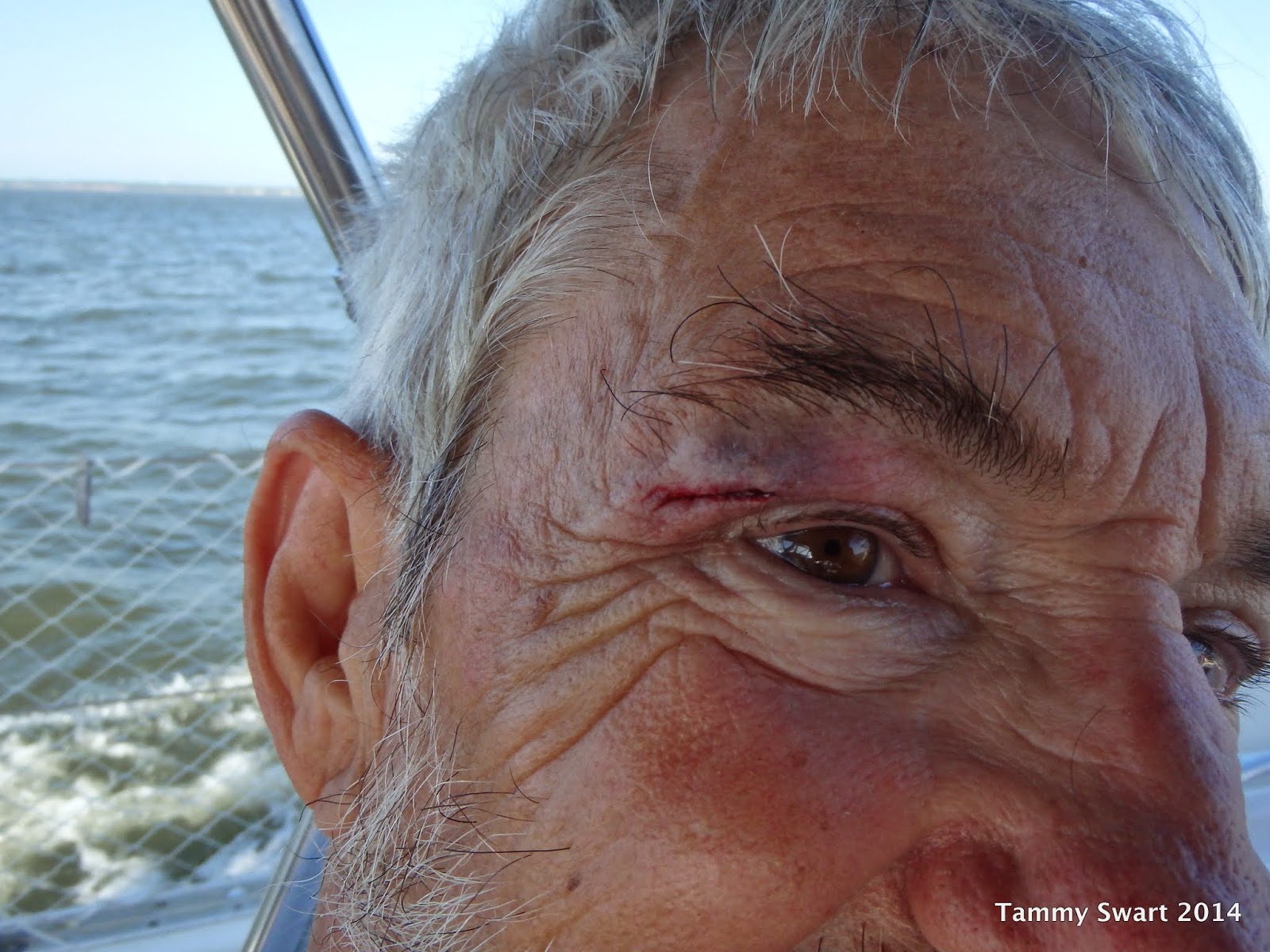 He even had to Nurse himself, getting his own ice bag and holding it to his head while I continued on at the helm.  It didn't bleed much, but it did start to swell up right away.  I'm guessing it would have been a candidate for a couple of stitches had we been close to medical care...  Bruce is the BEST patient ever though, and he swore it didn't hurt.  Had this been MY eye... there would have been all kinds of noise and waterworks!  But he just sat out for a few minutes, then went back to work trying to get the sails to aid us and reduce our rolling for a better ride and speed. 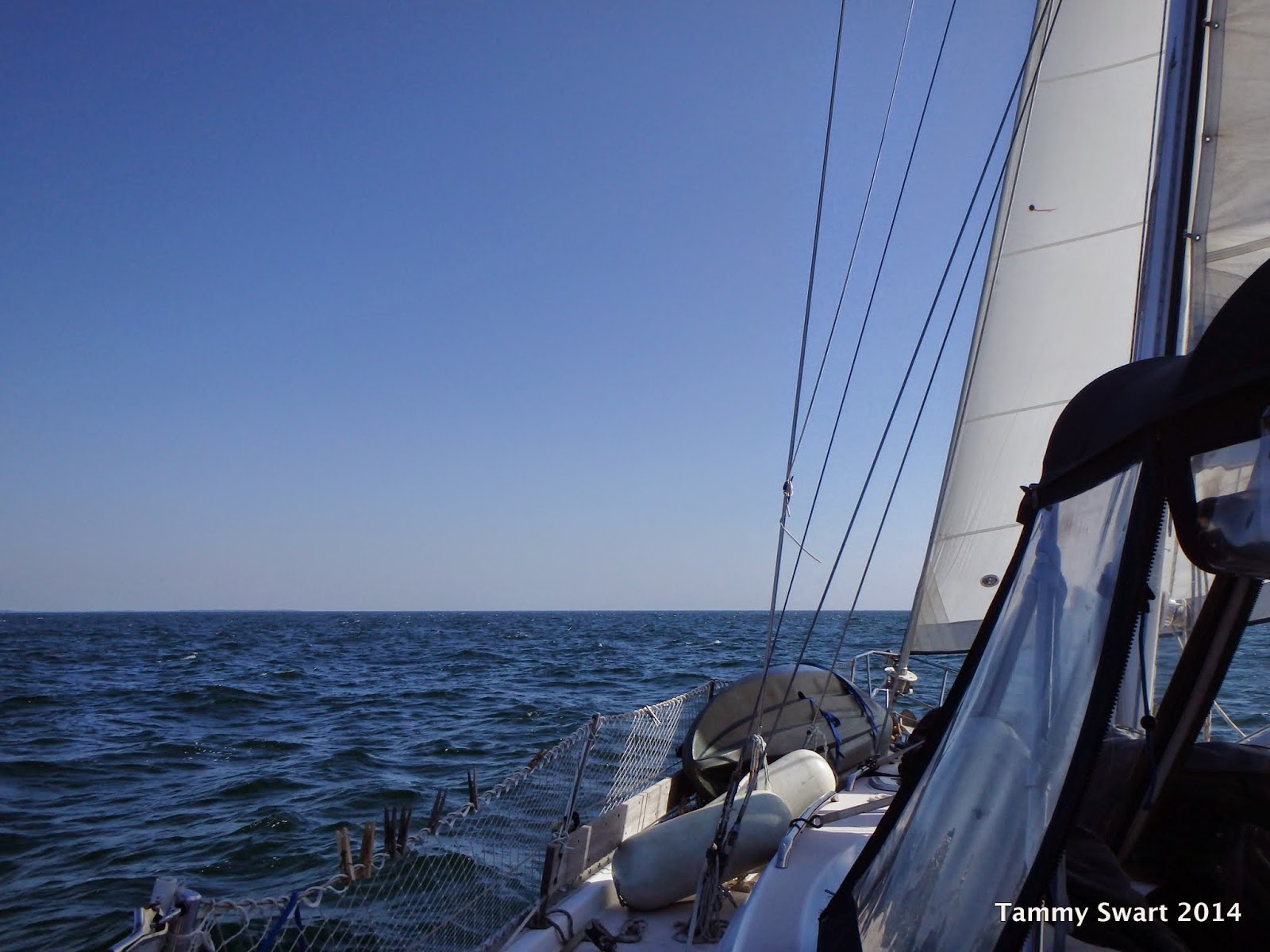 After  our rough start, we actually did to get in a bit of sailing.  The winds picked up a bit and came around to the beam.  Bruce had the sails trimmed for speed... but we were still only getting enough to allow us to power back on the throttle, and not enough to turn the engine off completely.  We wanted to get into St. Catherine's Inlet before evening. 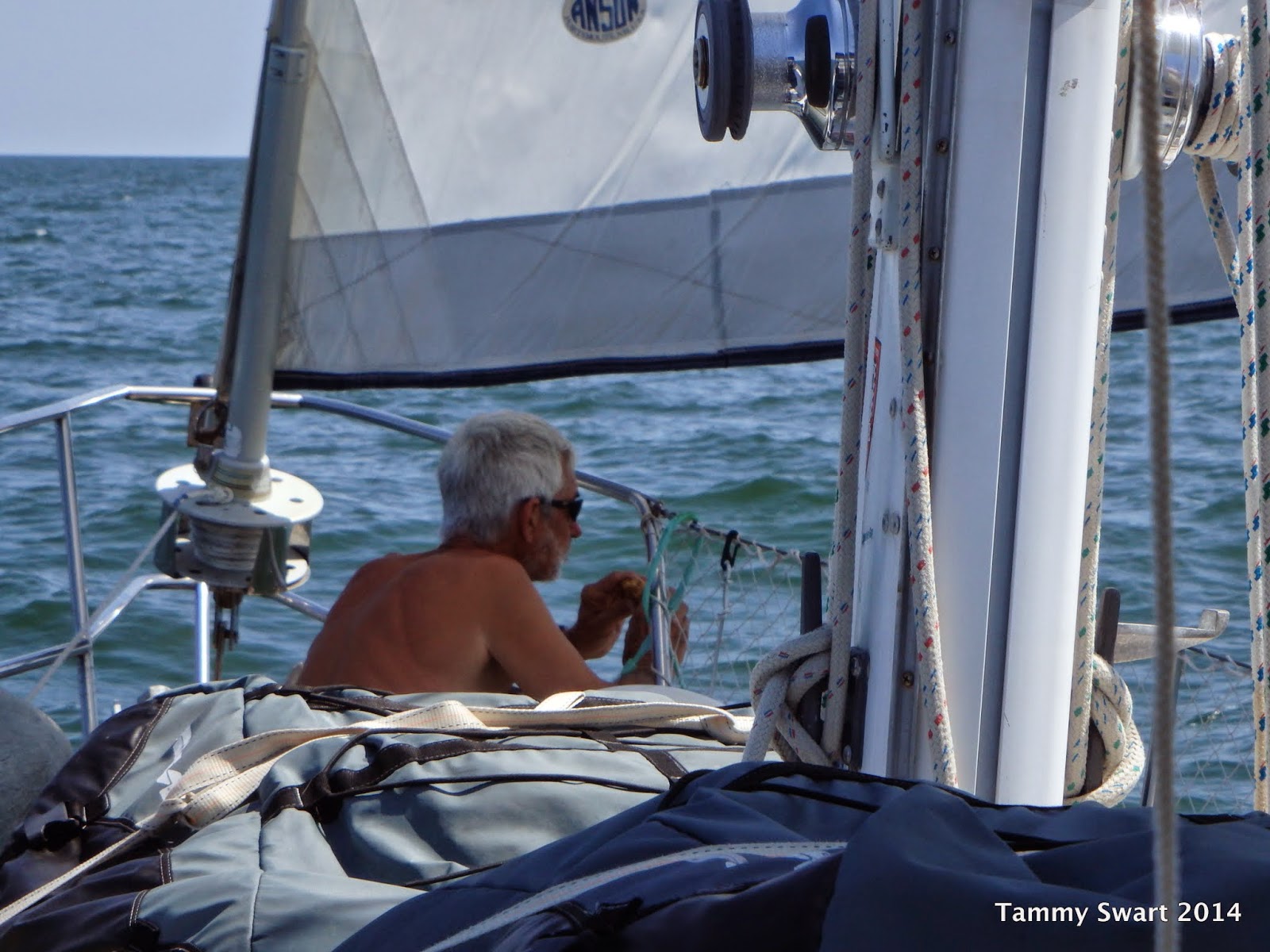 I stayed at the helm, readjusting our course now and then and making sure that we shaved off as many miles as we could while remaining in safe depths and avoiding the dreaded shifting shoals.  Bruce had his lunch while sitting not the bow.  He loves to go up there and listen to the water shushing by.  Or maybe he was plotting a way to get back at me for smacking him with the mainsheet...  I'm onto you Buddy!!! 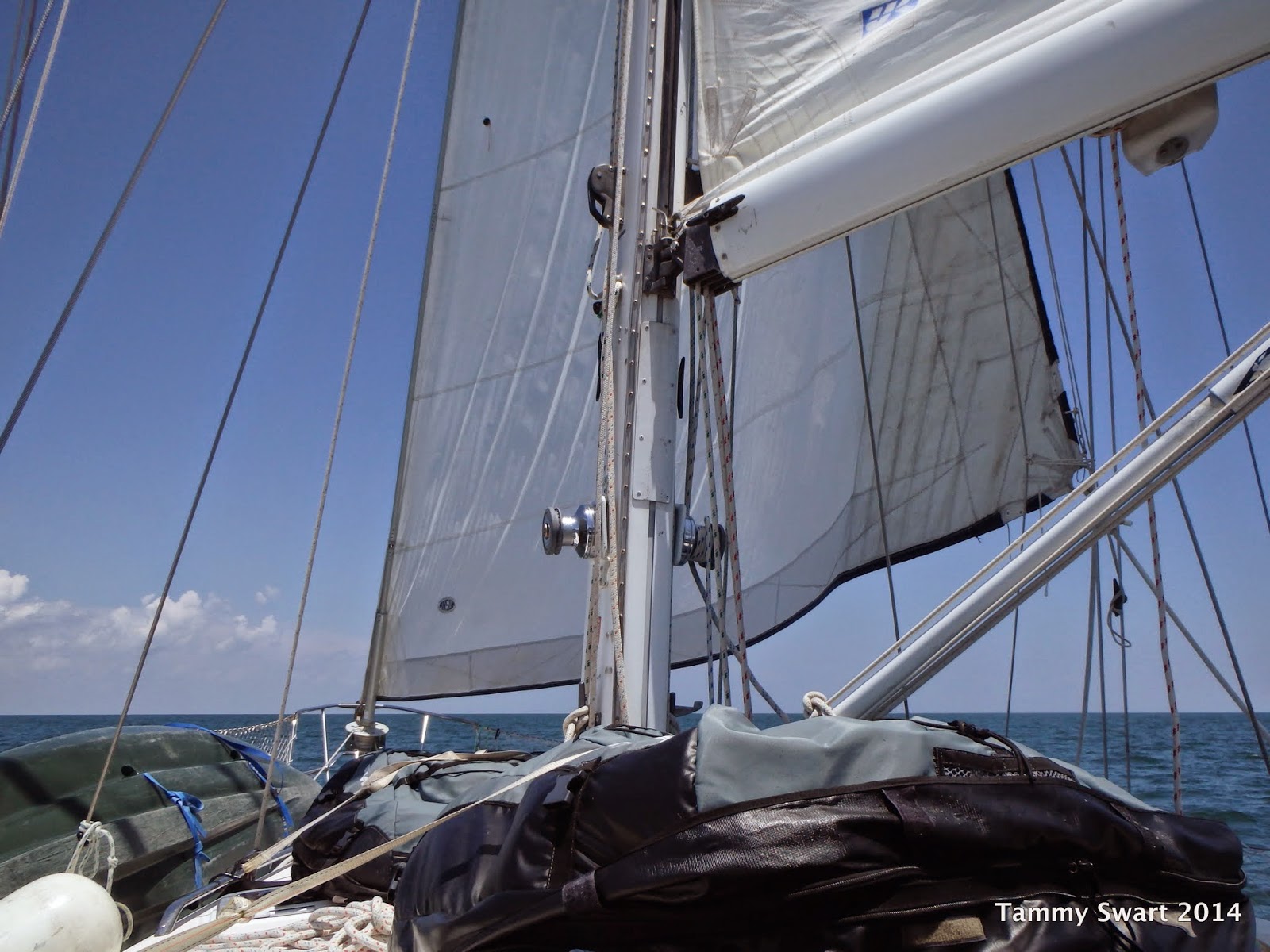 Towards early afternoon, the winds we had been continuously coaxing into providing us with forward propulsion, gradually began to subside and slip back behind us.  Our sails began to droop and flop and no amount of finagling kept the jib from hanging like a rag...  It was time to roll it up.


With the winds going the same direction as we were and barely registering on our instruments, the air seemed to be dead calm.  The seas flattened out, reducing our rolling, but it started to feel really HOT! 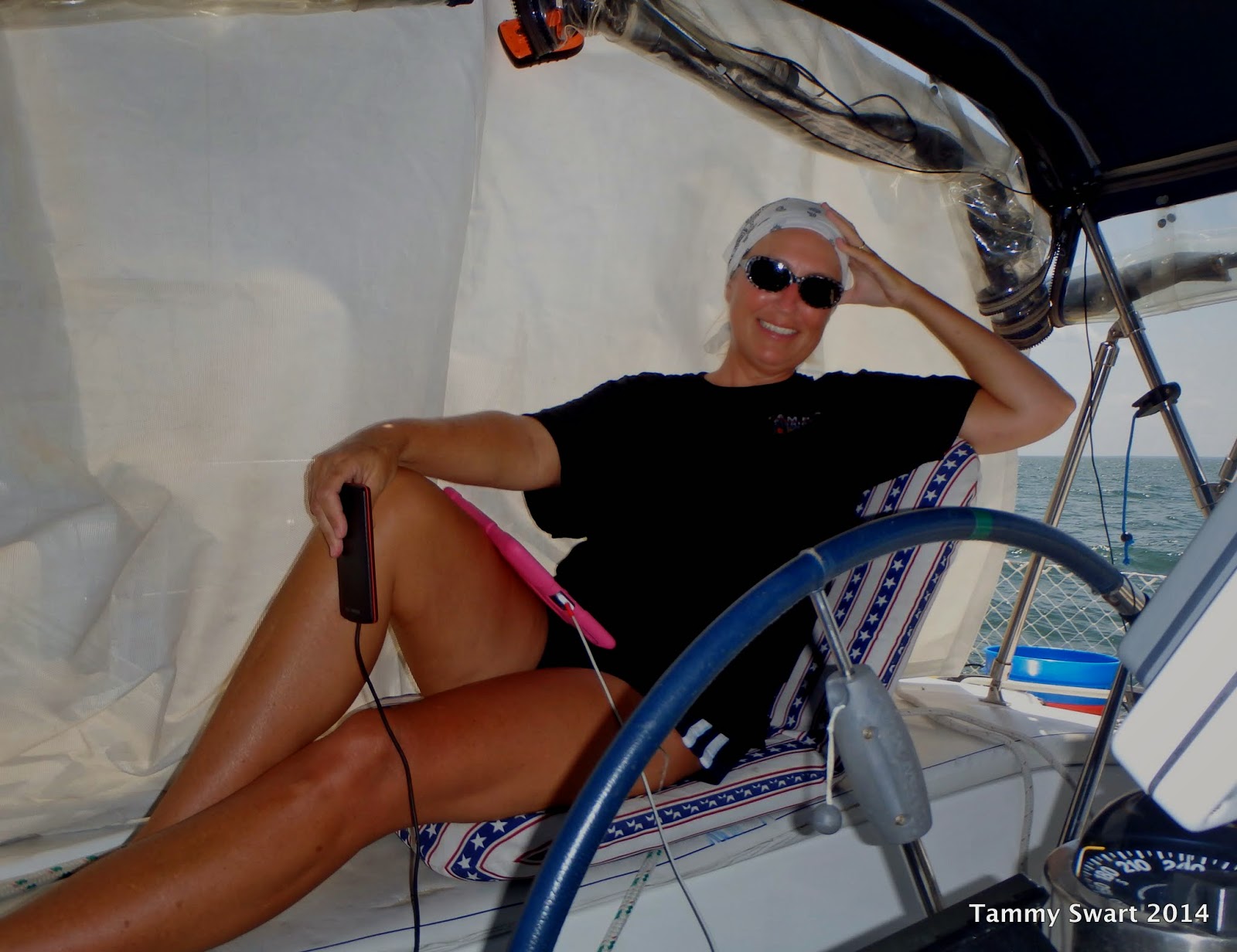 Time passed slowly and our minds began to conjure up visions of buzzards circling overhead (no, those are pelicans... I swear) and a reverse mirage of dessert sands where there should be water...

My thoughts became hazy as the sweat poured from my every pore... There is no place for fashion on sailboats. 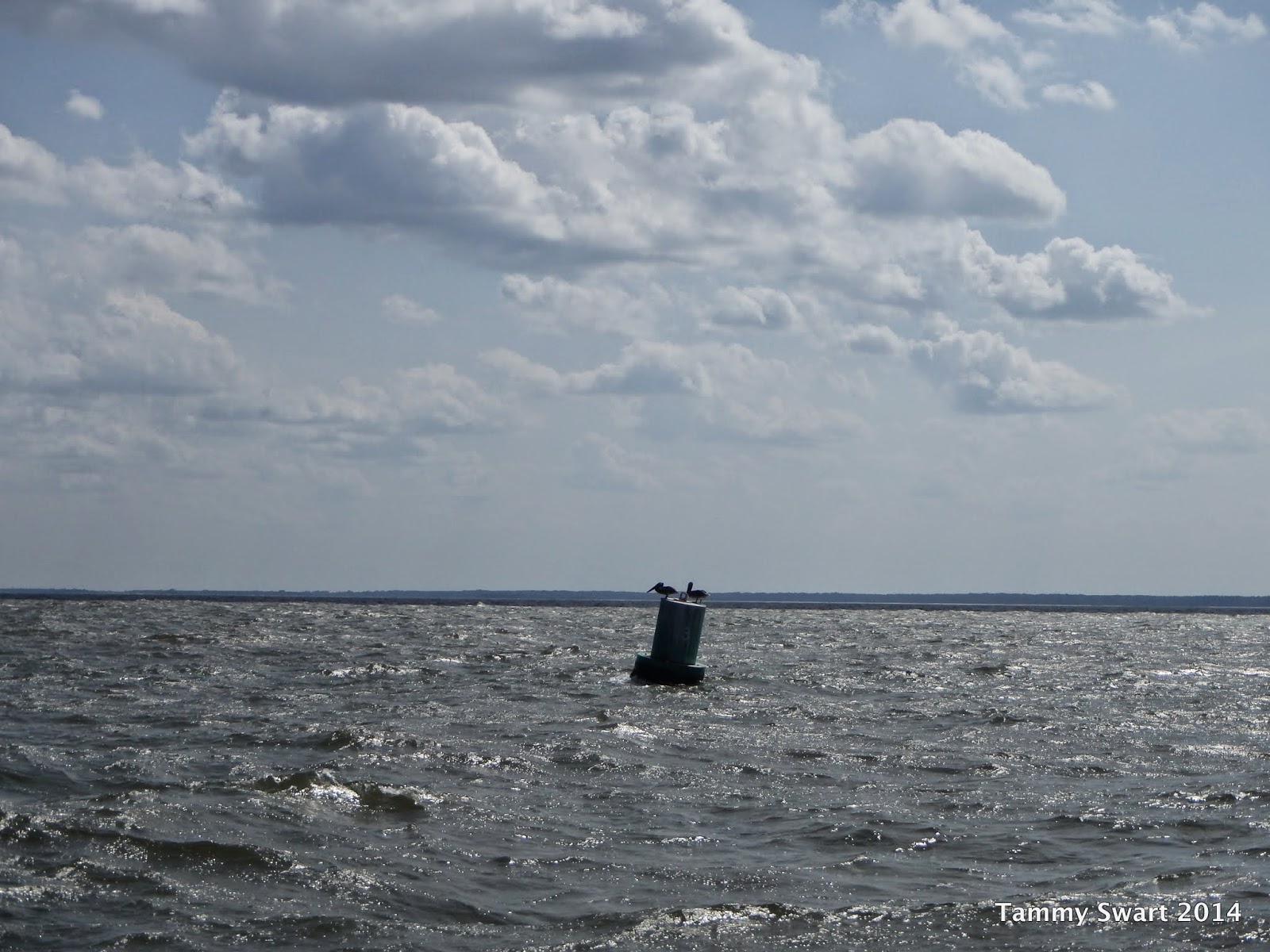 We began to perk up a bit as we neared the outer buoys that marked the dredged channel into St. Catherine's Sound.   The sea state began to get bouncy as we turned back up into the wind to drop the mainsail.  What?  There's WIND??? 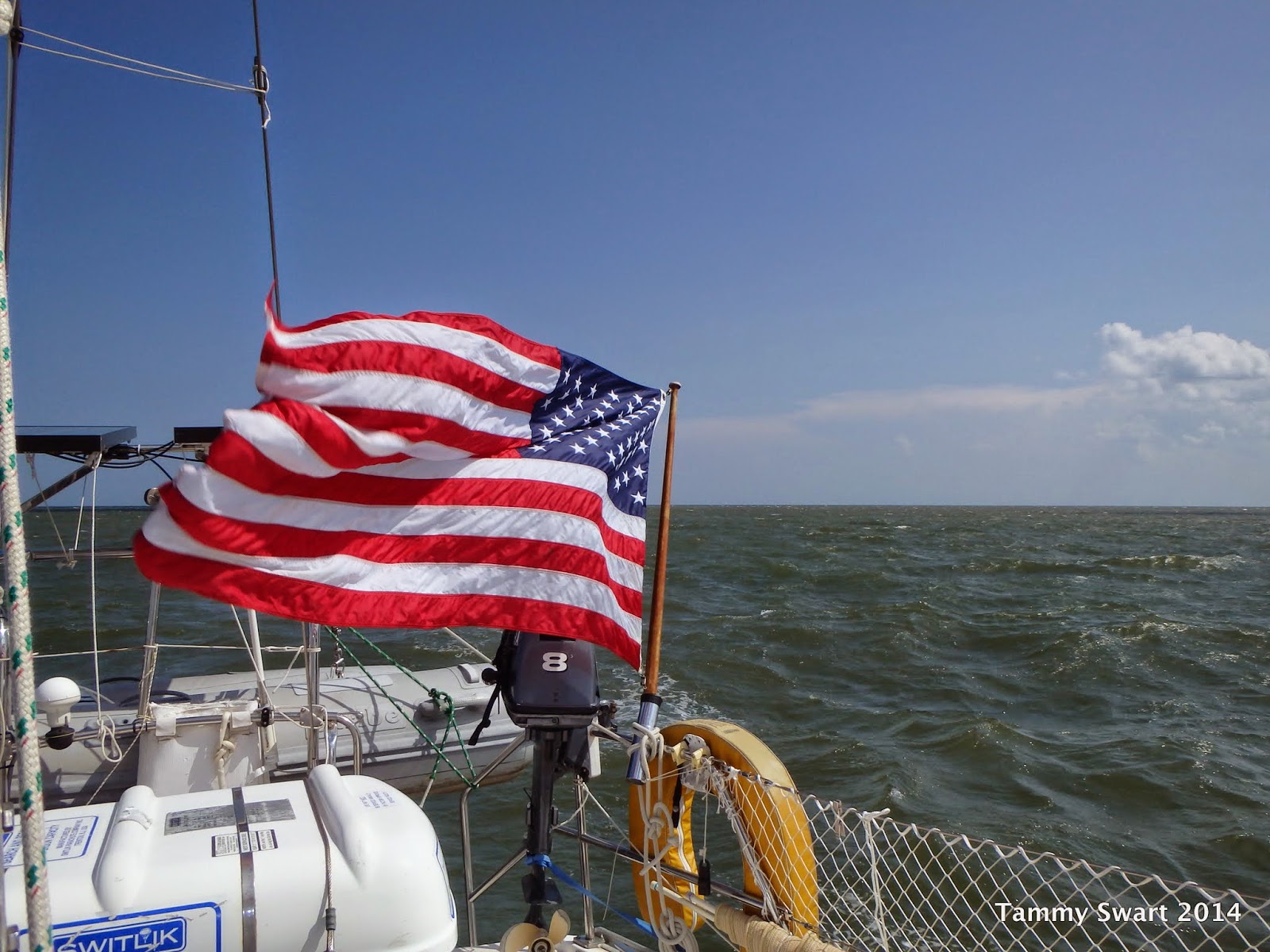 Where did all of THIS come from!?  Our speed had gradually increased and my assumption that we were benefiting from the incoming tide was only partially correct.  The winds had come up suddenly, just as we made the turn into the channel. 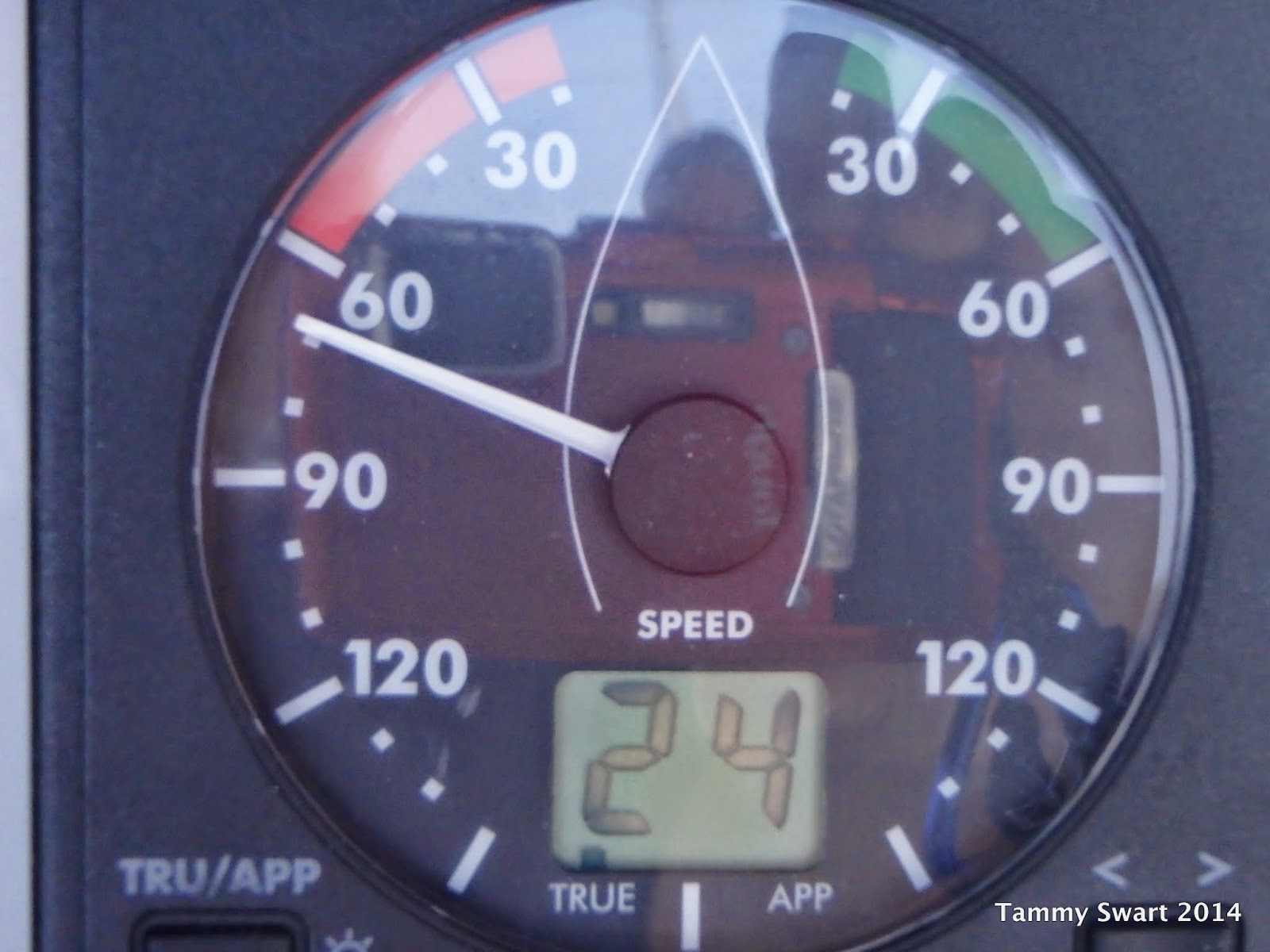 The incoming tide bore us swiftly into the Sound and all thoughts of sweltering were blown away as the winds increased.  14... 18... 22...24 knots!!!  Blown away with the wave tops was my hope of entering the sound at a sedate and stately rate.  My worries about entering unfamiliar and treacherous waterways, whose descriptions offer dire warnings of "best entered during settled weather", had no time to surface as I held the boat steady and kept watch on the depths. 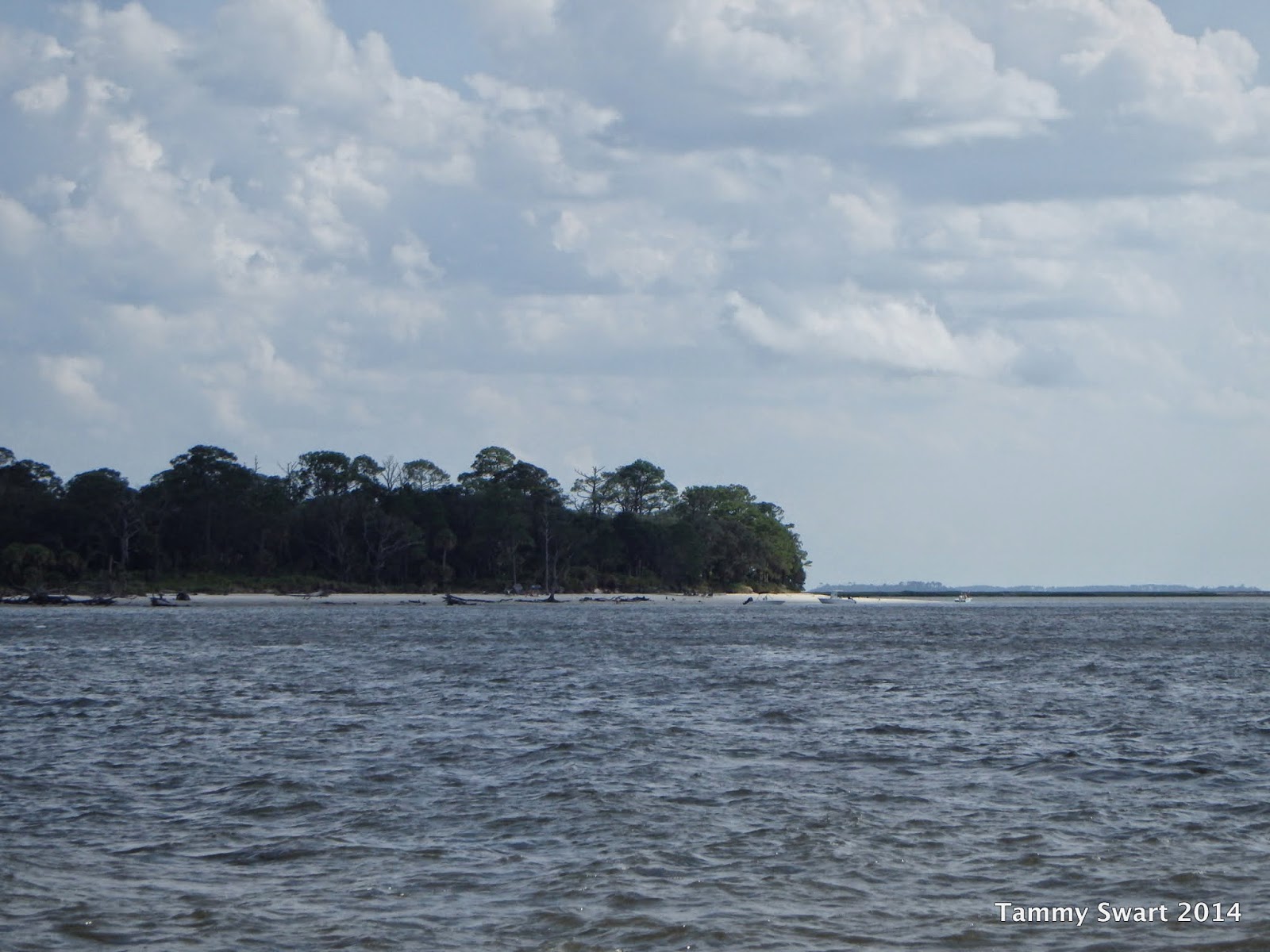 The navigational aids were well placed and all in proper position.  We easily followed them into the deeper waters of the Sound with no mishap.  The swells grew smaller and the motion of the boat settled out and suddenly we were in smooth water and approaching the entrance to our little hole-in-the-wall... Walberg Creek, where we would drop the hook for the night. 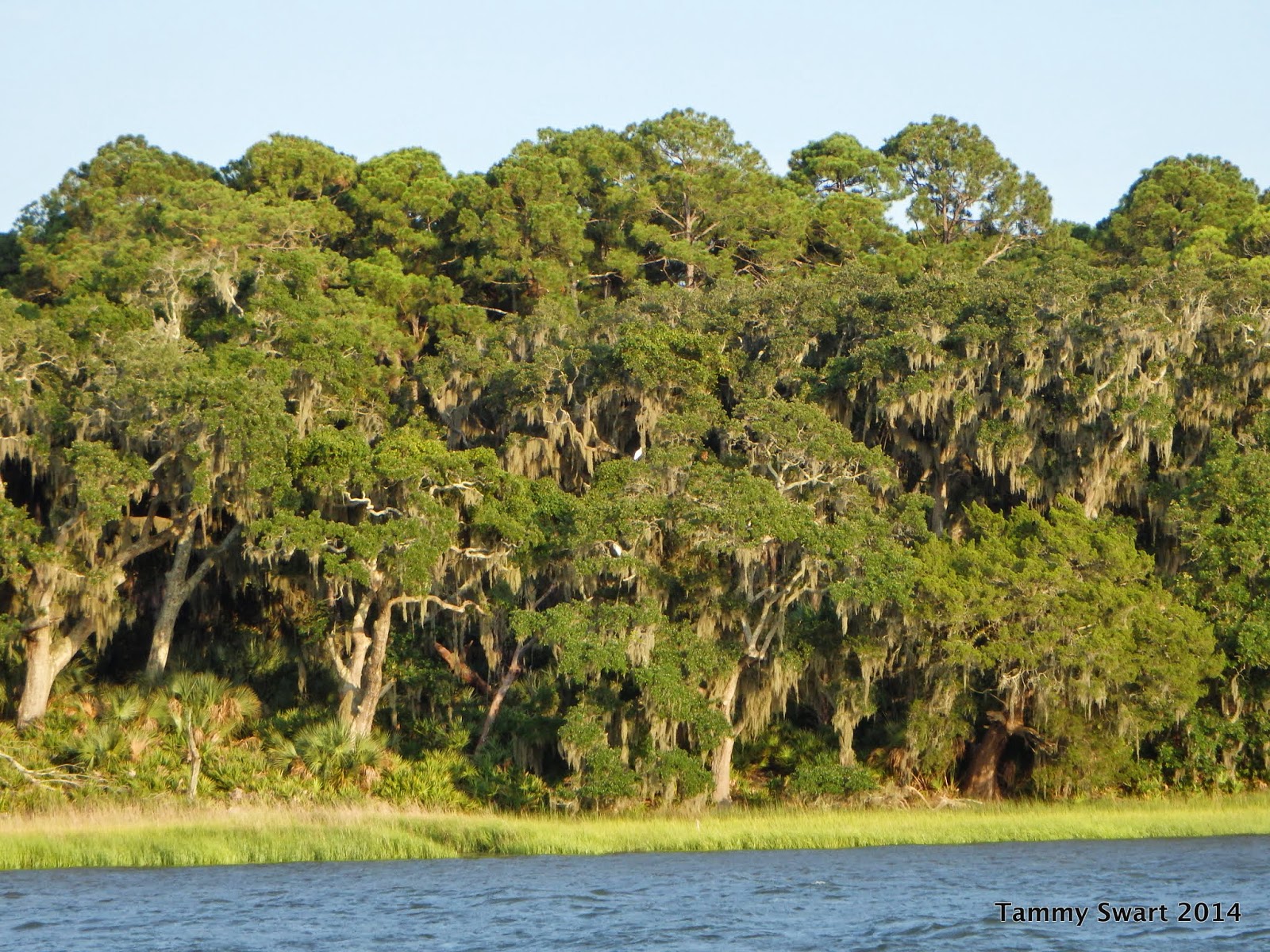 We followed the waterway around the point and found the winds blowing right at us.  The Creek was perfectly aligned with the wind and the wall of thick trees offered no protection at all.

We motored up into the Creek, monitoring the depths as we went.  The tide was coming in strong and against the wind, causing the surface of the water to kick up a bit.  We found a spot where it seemed to be more smooth and turned our stern to the wind and bow to the tidal current.  We dropped the hook and took our time getting it settled in. 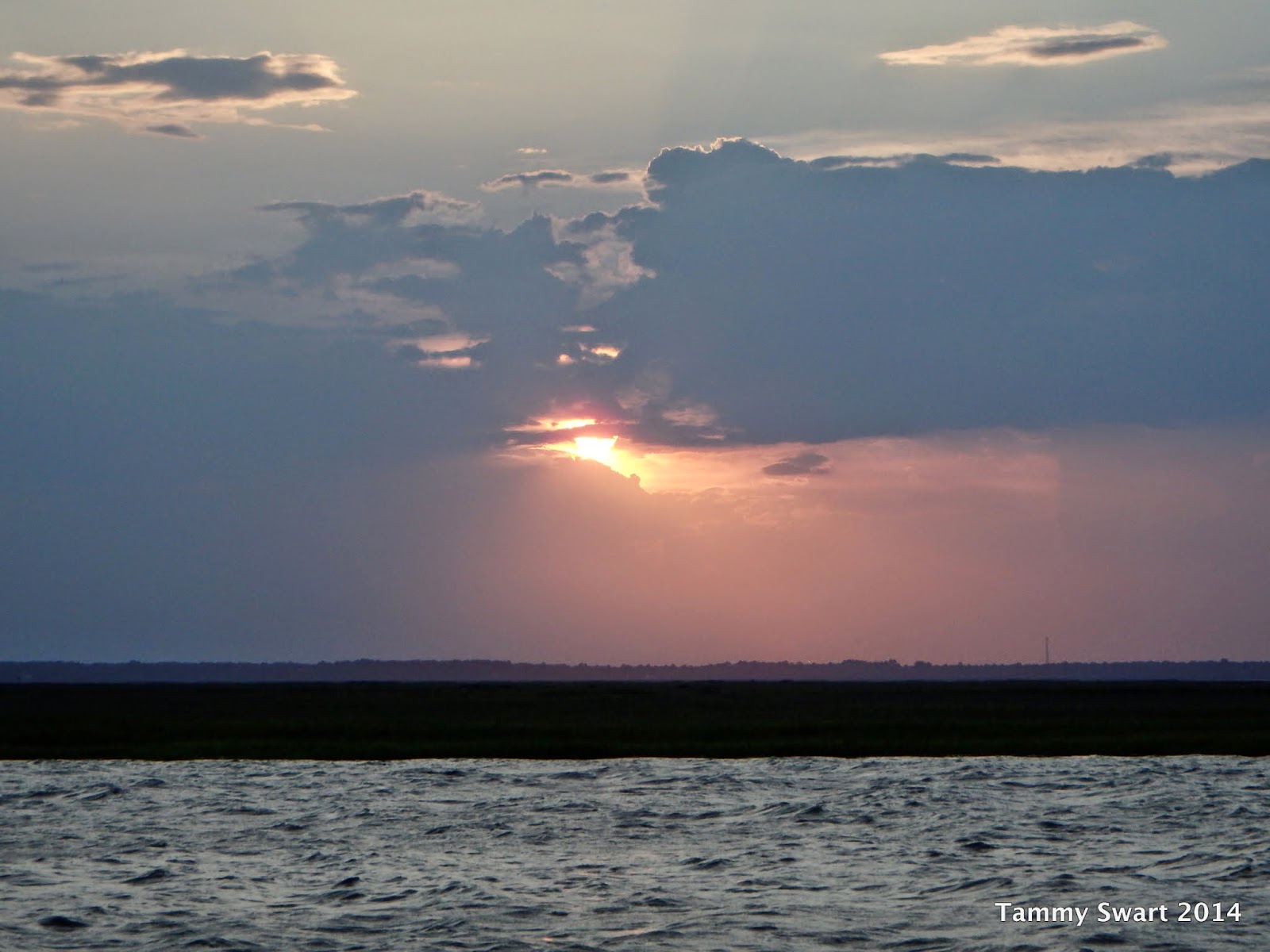 There was plenty of swing room with good depths in the teens right up near the shore.  I had my suspicions that we would be lying to the current no matter what the winds did, and I was right.  We relaxed and watched nature settle for the night over the marshes and in the trees.  The winds continued to howl, with the highest speed recorded at 35 knots and while the trees offered little protection, the shores close by did enough to dampen the fetch so that we experienced little motion.  We DO appreciate our big heavy boat at times like these...

We remained vigilant after dinner until the tide reversed and we were sure that our anchor would hold.  It did, and we spent a supremely peaceful night, awaking to calm conditions and soft morning light.  We would have enjoyed staying over for a day to explore the sandy, driftwood strewn beaches of the point, but we chose to press on. We've heard much praise for the beauty of Georgia's ICW, but have chosen to forego the pleasure until we can return in the cooler fall.  Three nights were all we allotted to Georgia on our Northward journey.  I'm looking forward to many more as we make plans to return.