The Path Is Winding And The Tides Are High 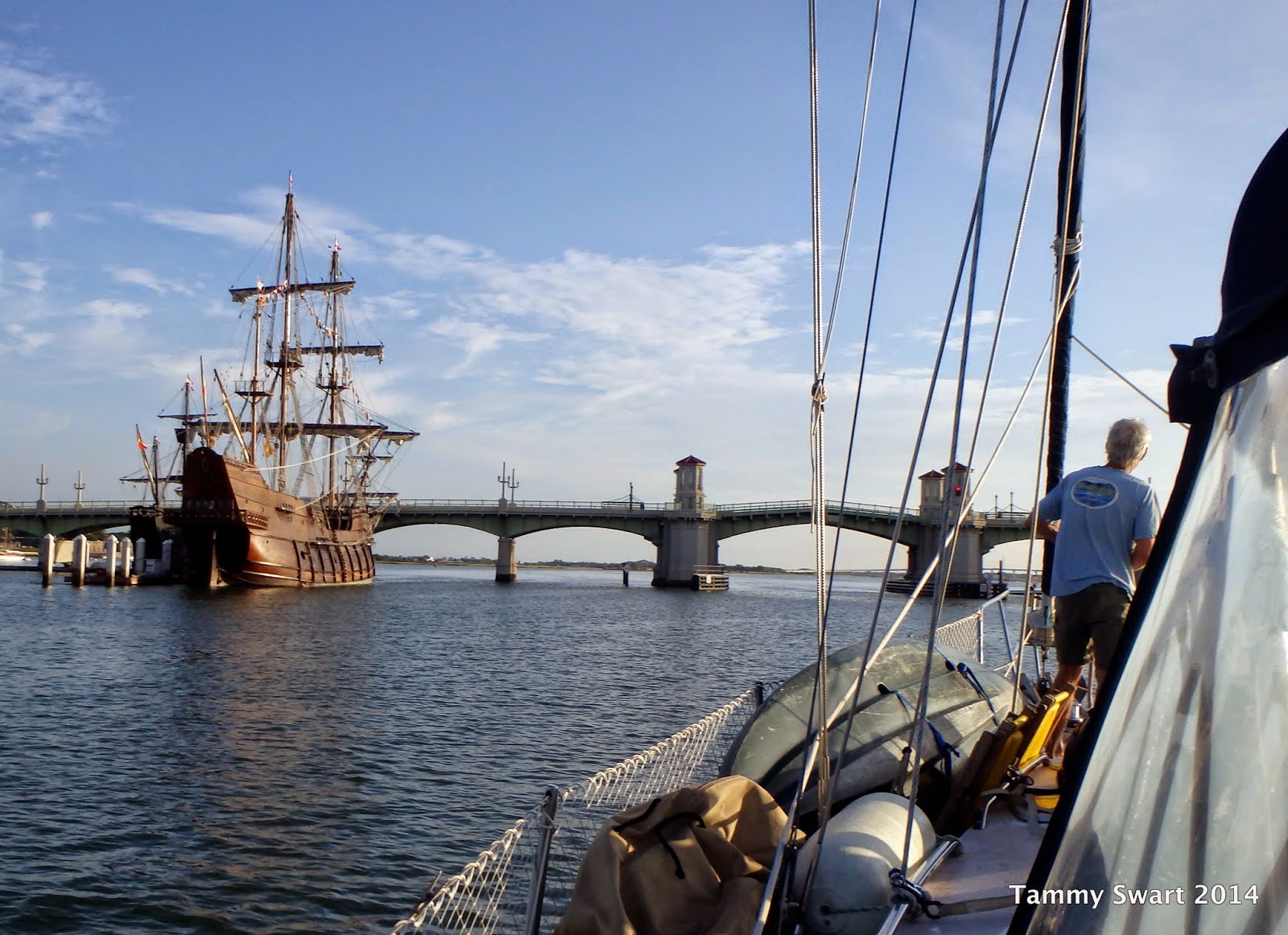 We bustled our guests off early in the morning so that we could all get back on the road after an enjoyable family mini-vaca with my Mom.  Bruce and I were ready and dancing around in the current as we waited for the 7:30 opening of the Bridge of Lions.


We motored past the sleeping Castillo and headed out towards the St. Augustine Inlet on a strong outgoing tide.  We struggled to break the grip of the current as we turned into the ICW for our next Northward bound hop.  The Inlet and the Atlantic will have to wait for another day.


The waterway between St. Augustine and Fernandina beach has been described to us as being "more like Georgia and Florida", and I can believe it.  There are no condos, just birds and trees and marsh. 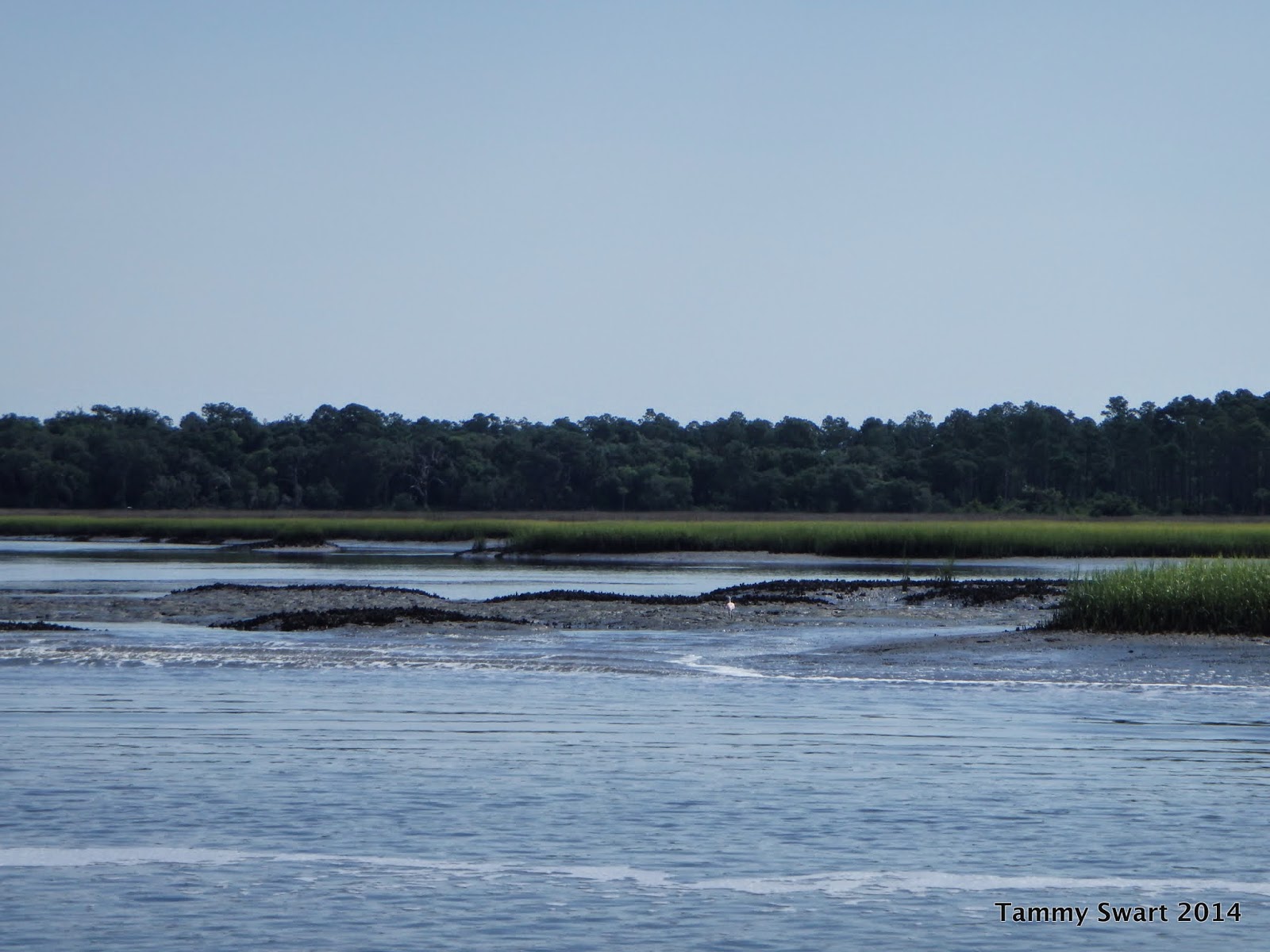 We relaxed and enjoyed the peace and quiet as we made barely 4 knots against the current.  Today we would be underway all day.  The winds were light and variable and it was cool out on the water for a July morning.

We marveled as we moved along at just how dramatically the landscape changes with the outgoing tide.  It was like the bathtub was being drained and all the rubber duckies were left stranded in the bubbles on porcelain.

Coming from a place where the tides are (now we know them to be) minimal, we begin to understand how different the lives of people who live near these waters can be.  Do they really plan their boating activities around the tides?  They MUST! 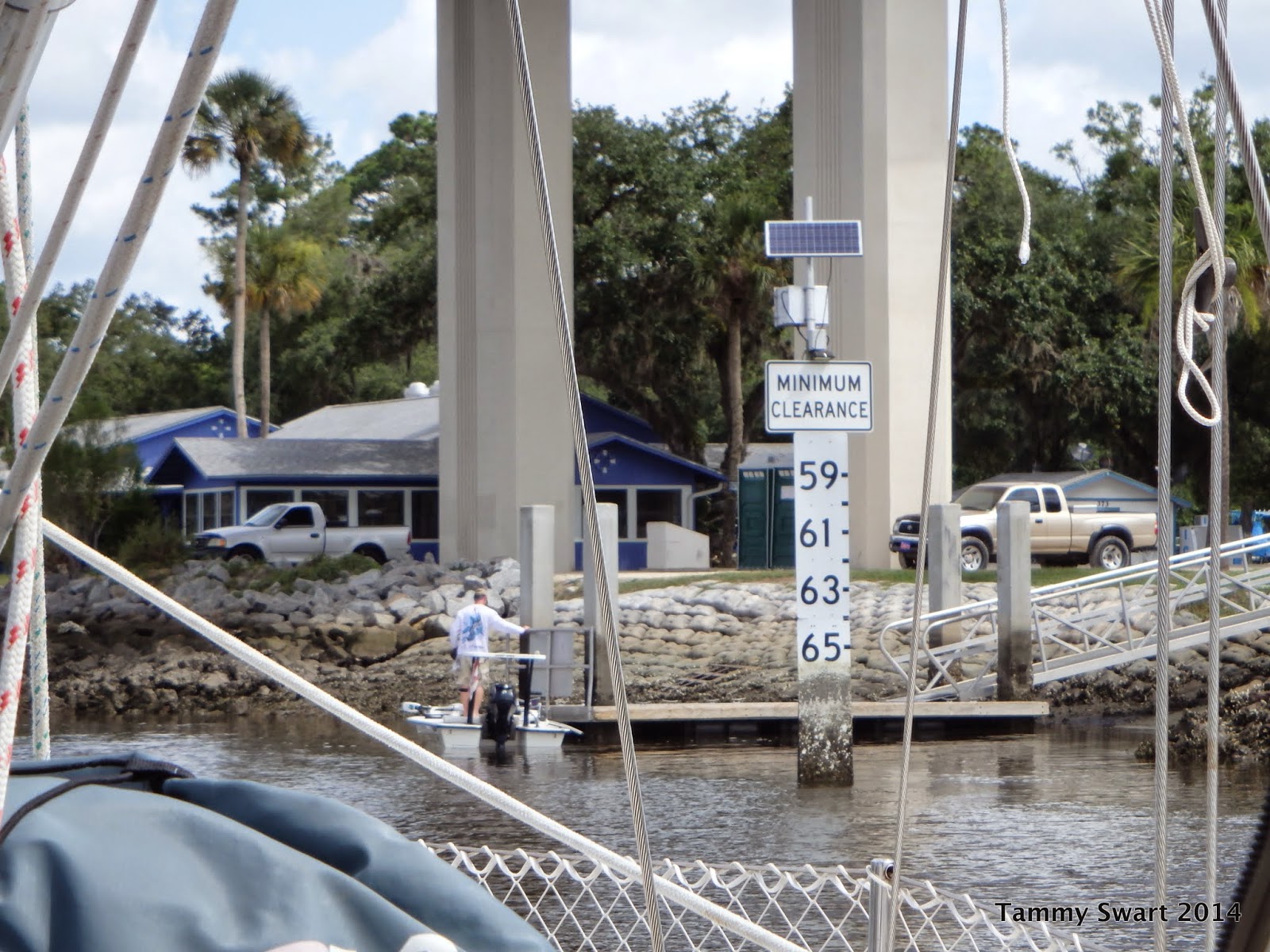 Bridges that we are normally concerned about have become a non-event.  When the bridge height is published to be 65 ft. clearance at high tide, that is always subjective.  If the tide is higher than normal for some reason, it could be that we would need to wait until the tide drops to pass safely beneath the span with our 62 1/2 ft. mast height.  NOT TODAY!  We've never SEEN 70 ft of clearance on a 65 ft. bridge before... 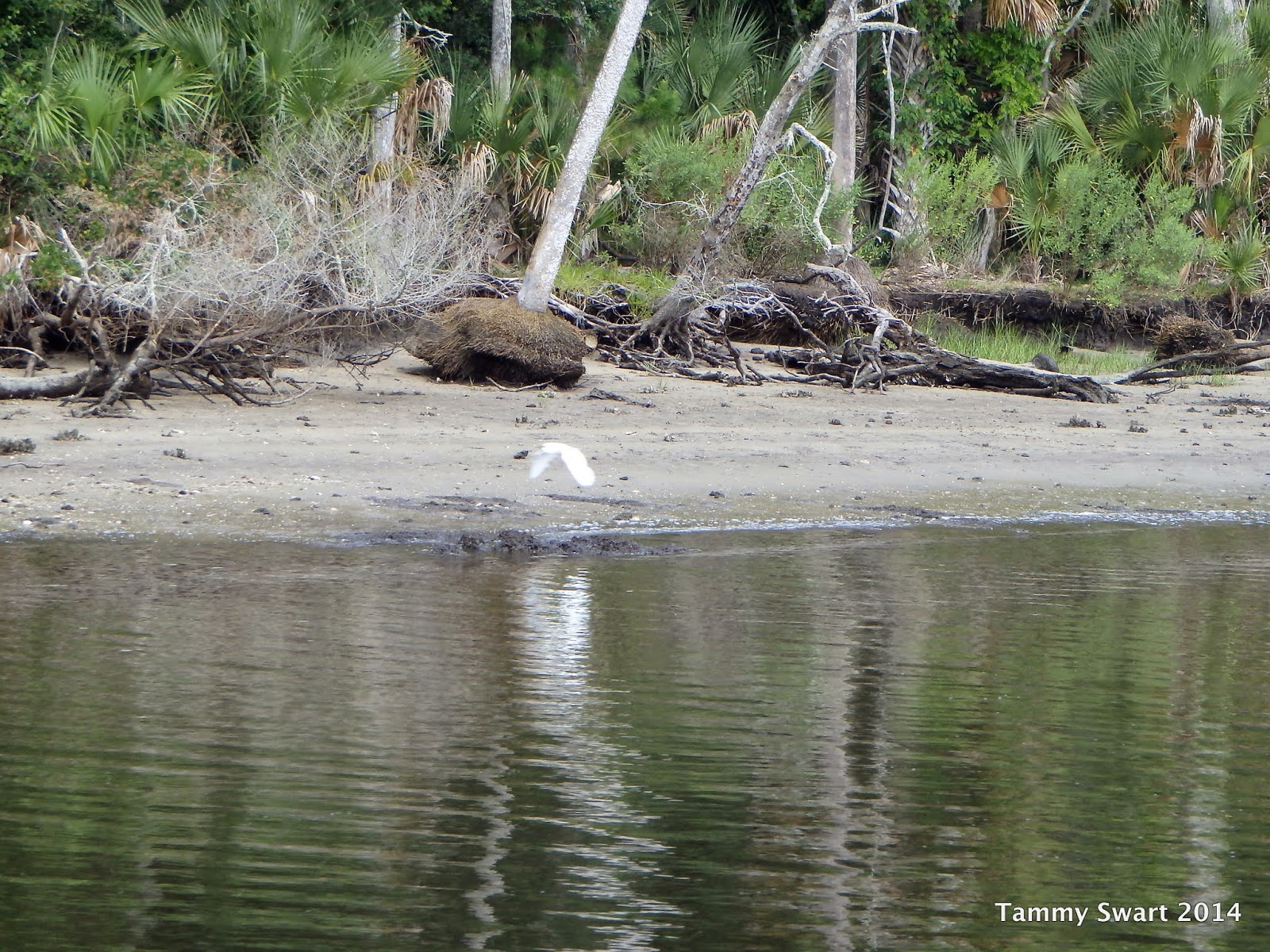 So now should we be worrying about the depth???  Well, luckily no.  The depths along this part of the ICW are some of the deepest we've seen.  Perhaps the strong currents keep the channels cleaned out as the rivers we're traveling wind their way along the coast.

It was an easy day even though we were hand steering most of the way. There were some long straight stretches where we could engage the autopilot, but not too many.  The river twists and bends enough to keep it interesting.

Our big event for the day was crossing the St. John's River Inlet.  Bruce had memories of it which caused him some concern.  The tide was still coming in so we expected to be offset a bit as we negotiated the turn into and across this sometimes busy waterway.  We could hear ships announcing their approach to the ICW intersection and we hailed them on the VHF to let them know we were coming through.  We just had to hop across and turn into Sister's Creek on the other side where we would find a bridge that opens on demand.  That's the best kind... especially when you're dealing with the strong current, which would now soon be whisking us along instead of holding us back.

I'm still not sure how it happened, but suddenly we were across the River and there was the bridge.  I never saw the oncoming ship, or even the river for that matter.  I must have blinked and it was gone.  I guess I had expected it to be wider...  I scrambled to hail the bridge tender and he opened it right up for us and one other sailboat to pass through.

Our destination was immediately to Port as we passed the free pump out station and turned up a creek to find the Sister's Creek Free Dock totally empty and waiting for us.  Ahhh do we deserve such riches?  The current in this small creek sucked us in so fast it made turning the boat around in this narrow space a bit of a challenge.  We barely made it in this confined space but once we got turned around, I had to pour on the steam to escape the clutching waters.  I was full throttle just to get the boat close enough to the dock for Bruce to jump off with the lines and hastily secure us to the cleats to keep the current from sweeping us onto the shallow north bank of the little creek.

Once we were positioned near the end where we could find some air and quadruple lines were out, we relaxed and checked out our new home.  We had planned on staying here for one night, but maybe we'll just stay for two.  The dock is NICE and we have some projects that need ding which would be much easier with all this space.  And the water... the lovely free unlimited water... 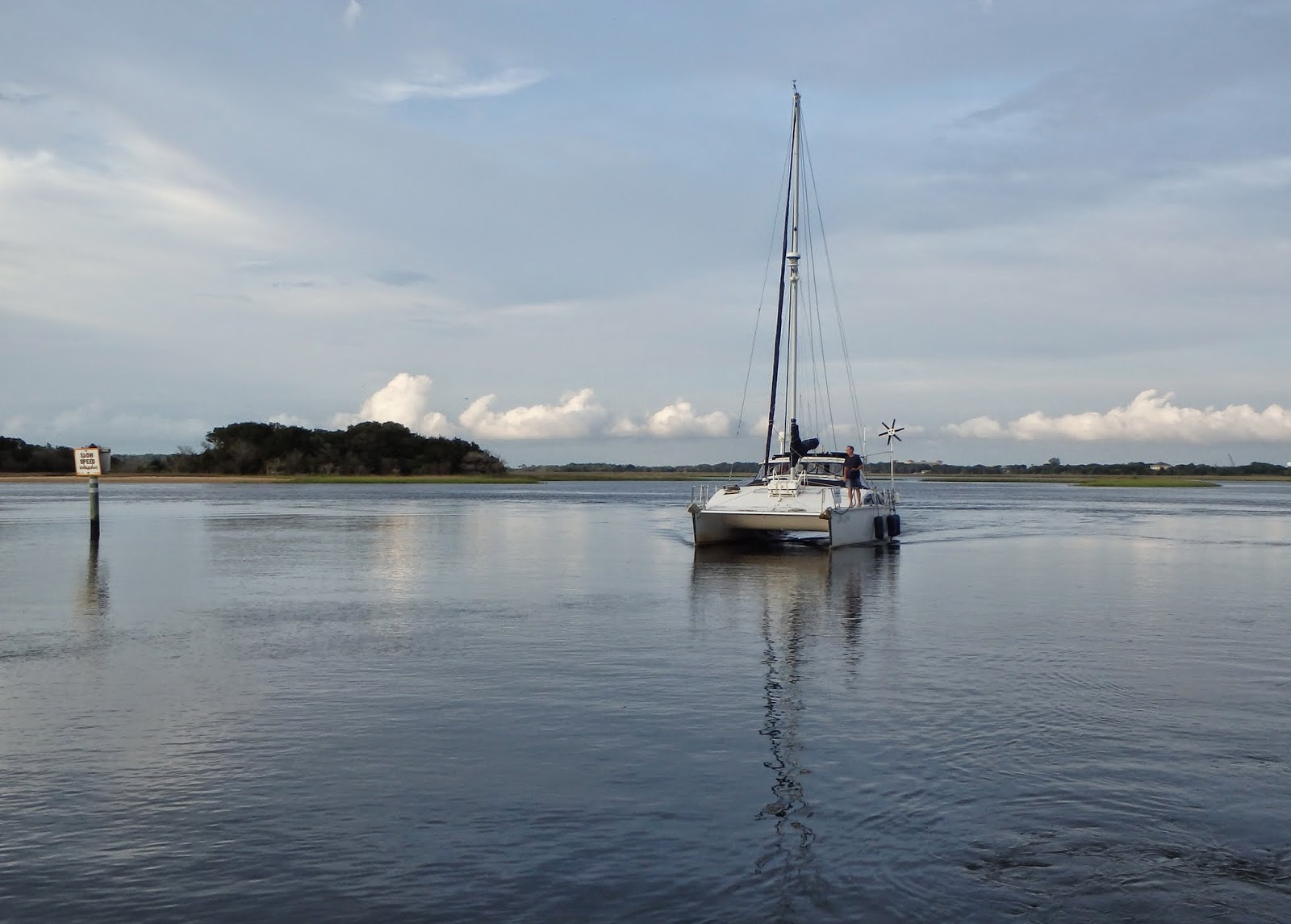 We had a surprise visit from a FaceBook friend whom we hadn't seen since Clearwater Beach.  Cathy and Ed on Sea Soul (for a little while longer) were headed our way and would stop and stay for the night. 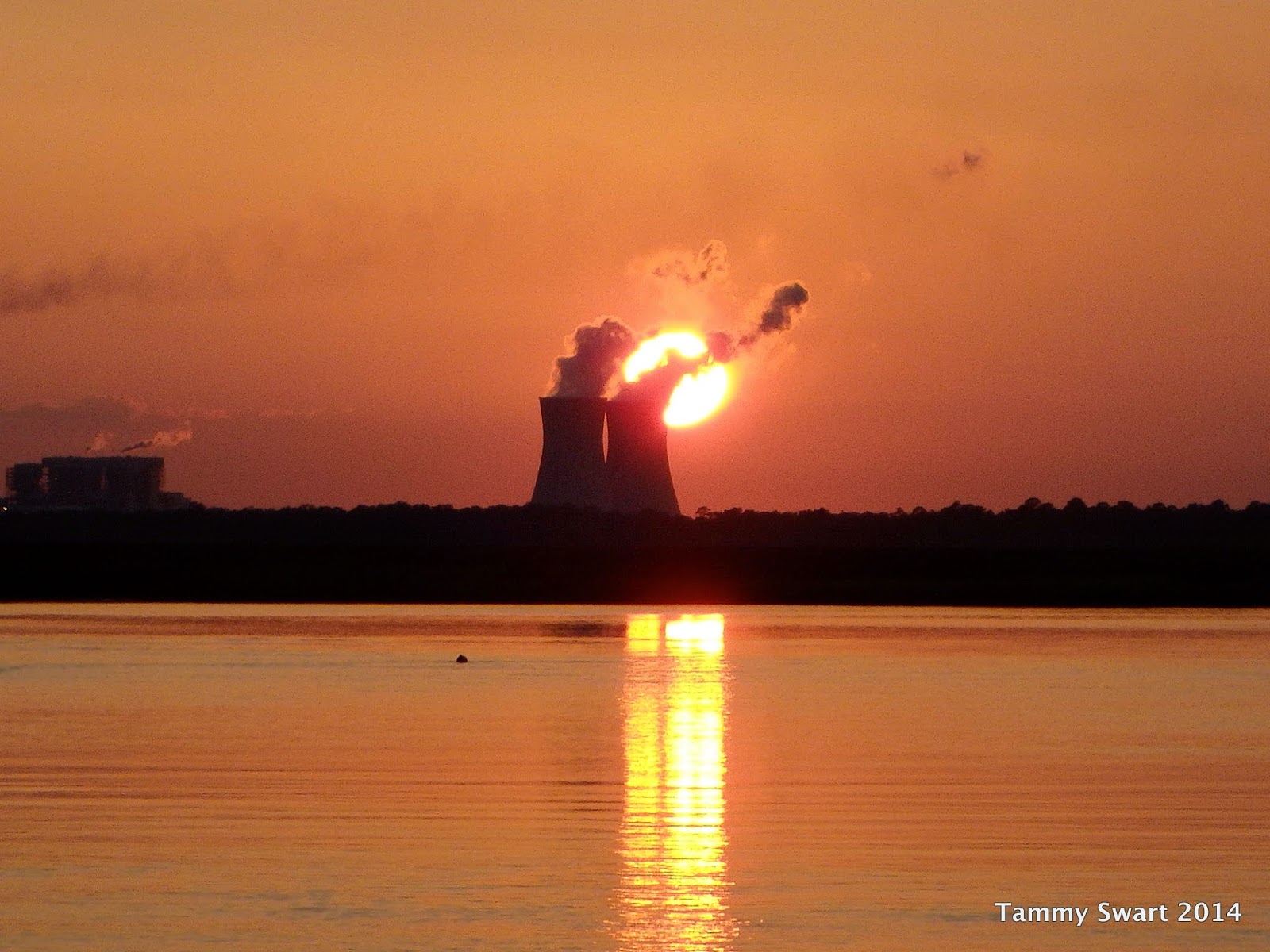 Their day had been a long one but they were still up for joining us for sundowners until the no-see-ums chased us in for the night. 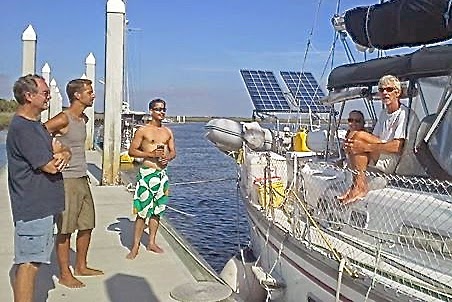 Another boat arrived near dark and the guys helped them dock, but it wasn't until the following morning that I realized looking out my bedroom window... that this was yet ANOTHER of my fellow sail bloggers... Jason from Sailing Chance!  Cruising is really showing us how small the world can be!

By mid-morning, everyone but us had cleared off the docks so Bruce and I got down to business.


We've been putting of his haircut for a couple of weeks now.  He wouldn't have a problem with growing woolly but he complains so much about having to tuck his hair behind his ears or it gets in his eyes...  Cry me a river Buddy!  But since we had this lovely salon at our doorstep, I took pity on him and gave him a trim. 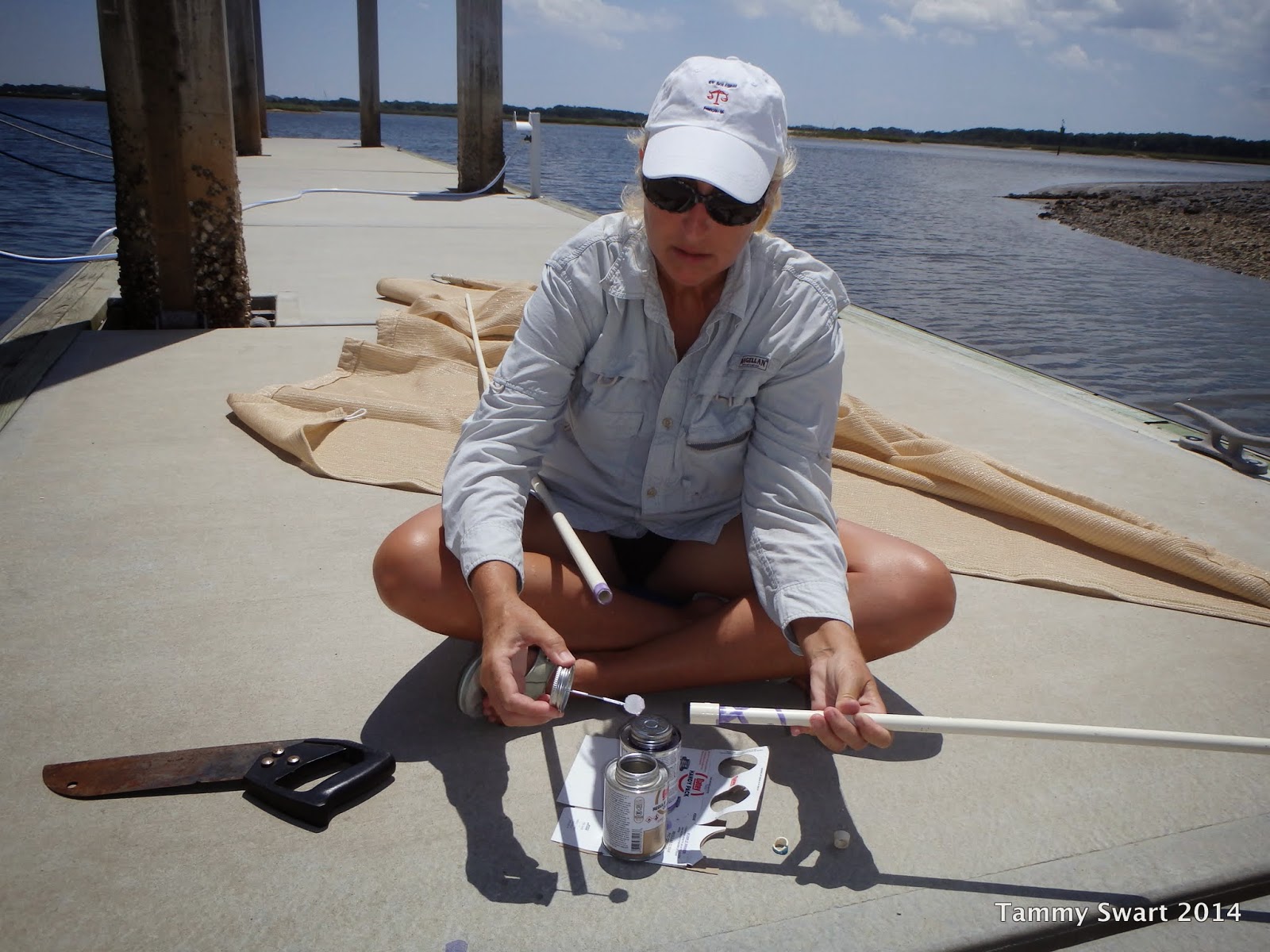 Next on the list was to repair the damaged sunshade.  Remember, we learned our lesson about leaving it up in a squall while anchored near Peanut Island?  Well, we've been without it since then, but we have the parts to fix it onboard. 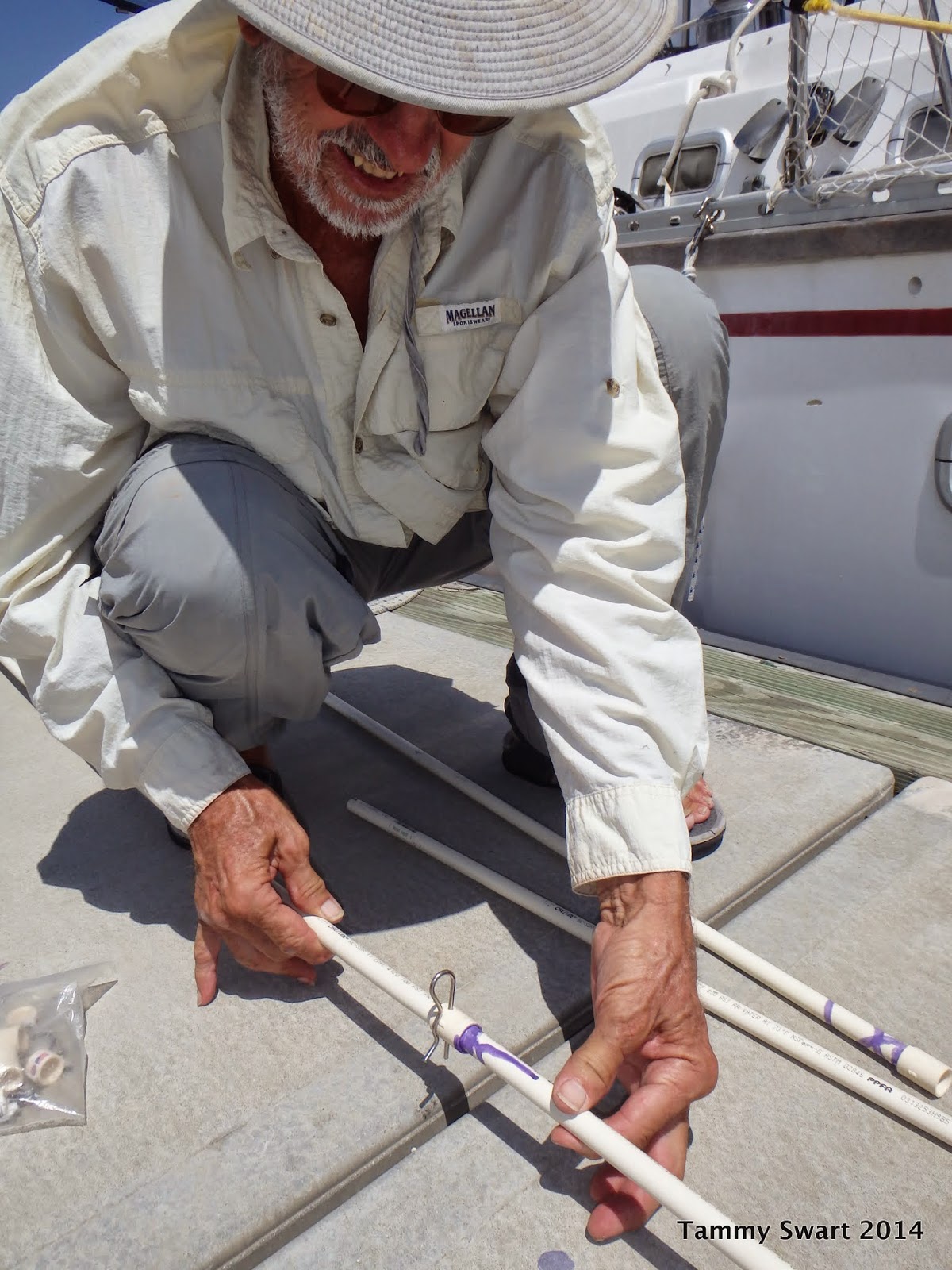 We laid it all out on the dock and put it back together better than before.  When we originally built it, we used small screws to join the two halves of the PVC frame so that we could break it down and store it in the V-berth.  This time we used a push pin that we picked up at a hardware store in Palm Beach.  I think this is going to work out much better! 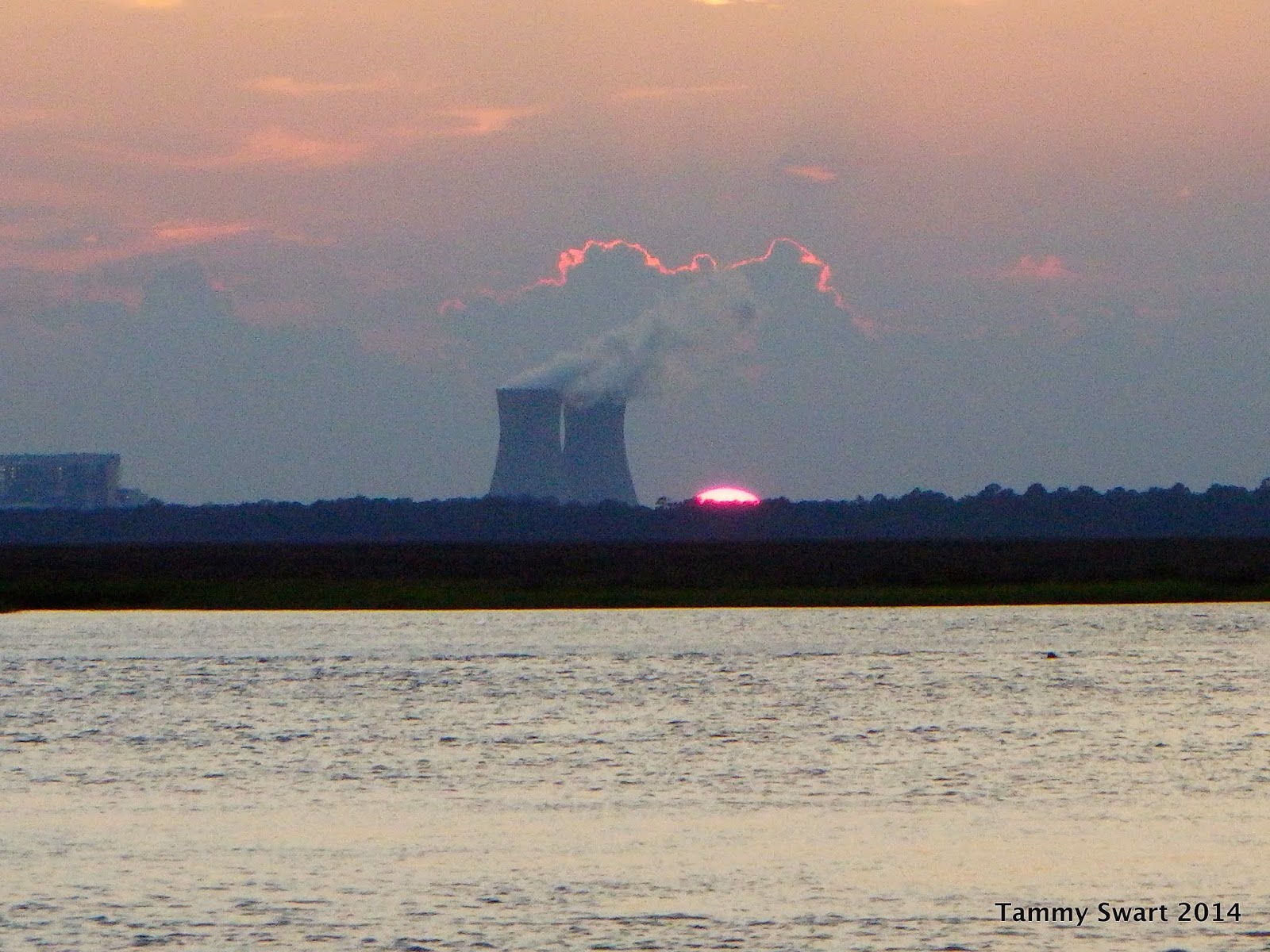 By the time we did all of that stuff, the afternoon Thunder Boomers arrived and we ended our day there.  Besides, we're Cruisers... we don't want to get TOO much accomplished in one day... it just wouldn't be right!  Maybe we'll take tomorrow off... 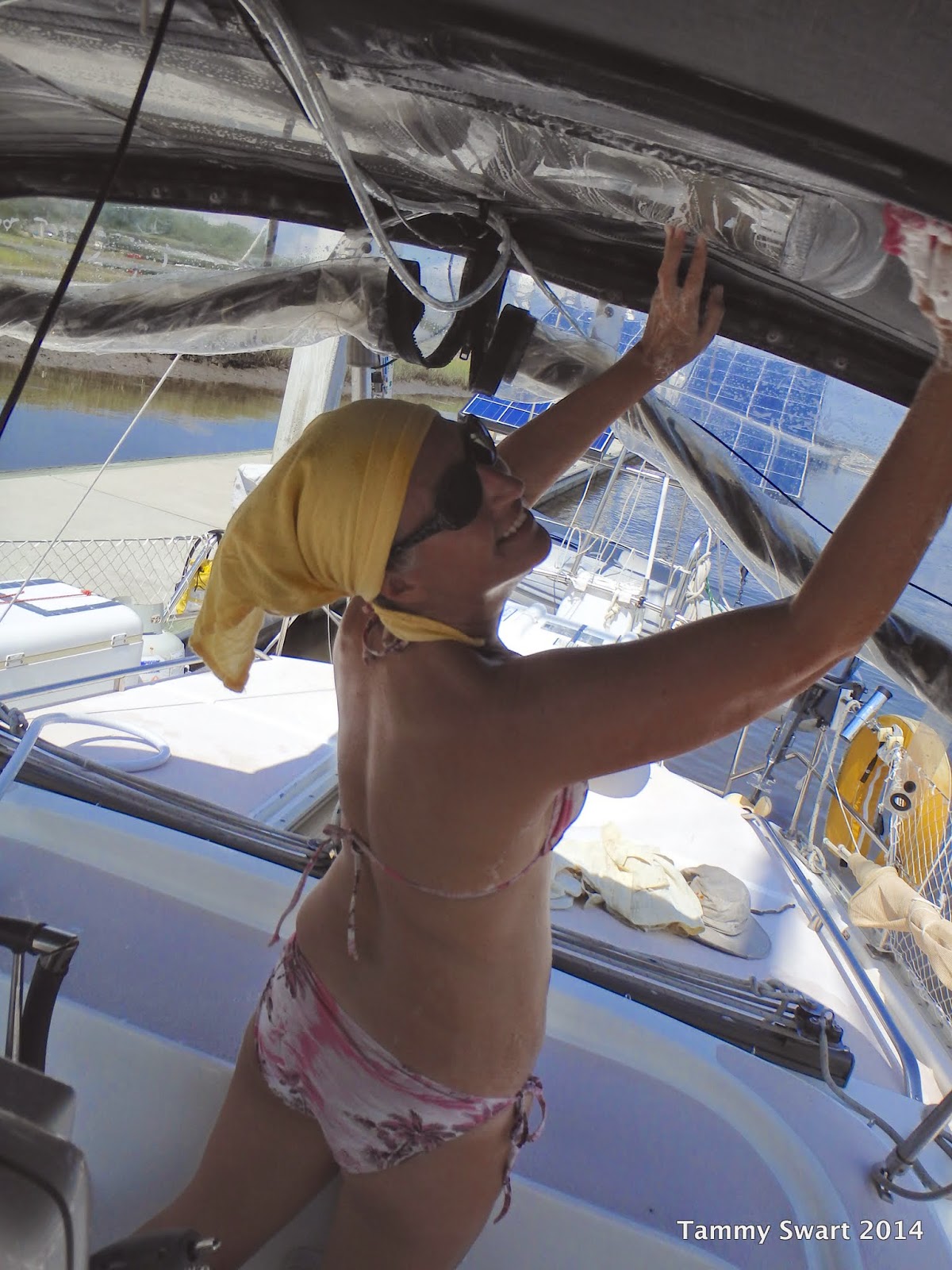 But we just couldn't let this dock and the free water go to waste... Our entire next day was spent working our tushes off to clean the decks.  I went to work on the cockpit and enclosure.  We donned our swimsuits and beat the heat with copious amounts of water. 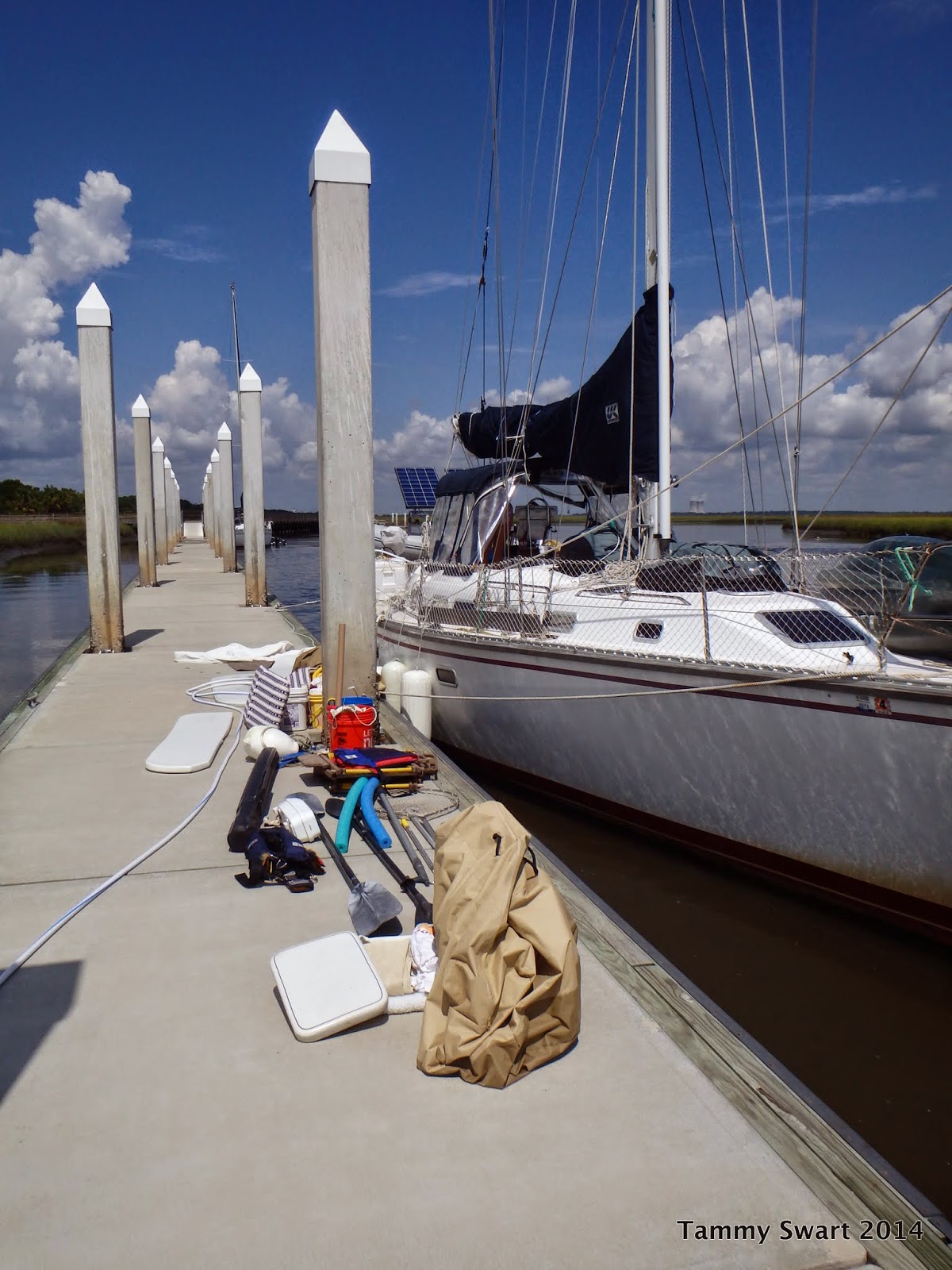 While I worked on that, Bruce took everything off the decks except for the Platypus bags. (We had cleaned those out back in Ft. Pierce).  I wish there was someplace else we could store all of this stuff.  We've culled it down several times, but there are just some things that we can't get rid of...  Sometimes I feel like the Clampetts with all of our worldly belongings piled atop our ride... 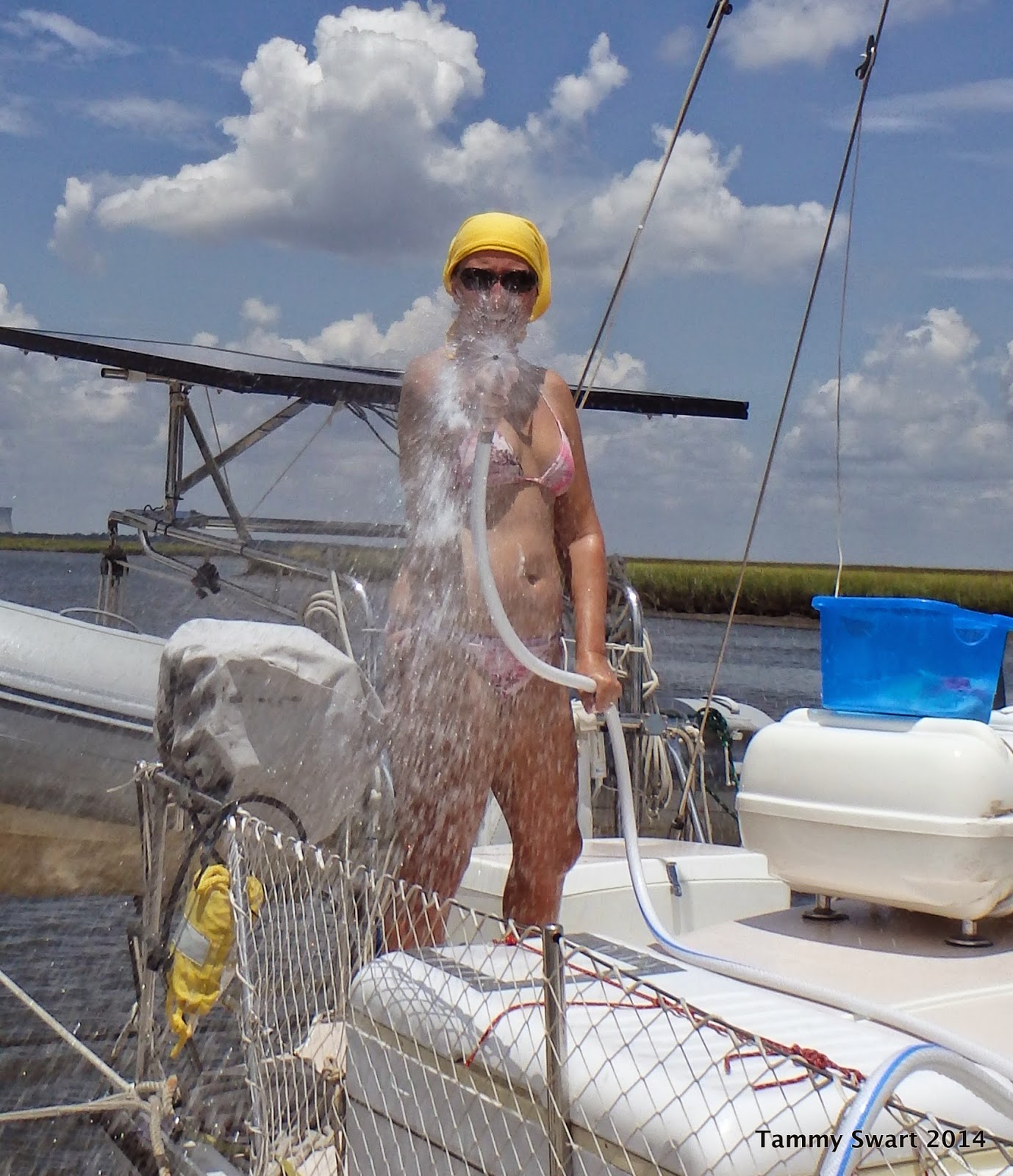 You would be amazed at how long it takes to thoroughly clean a 45 ft. sailboat.  We didn't even get the decks finished when the rainclouds began to threaten once again.  We hastily packed everything back on board and battened down for today's afternoon mini-storm.

This Free Dock has a 72 hour limit.  During our stay we were visited by the self appointed  Official Unofficial Greeter, Browne.  He is a CLOD (Cruiser Living On Dirt) with hopes of getting back out there some day... but for now, he visits Cruisers who stop here and helps people get things they need.  Town is 15 miles away and he was on his way there.   He offered to stop by Home Depot for us to pick up something we needed.  What a very nice man he is.

We had a second visitation from the local law enforcement person.  He showed up in shorts and a ratty t-shirt and chatted us up for a bit.  It wasn't until I asked him if he lived around here that he told us that he was a policeman.  Cool JOB!  He asked us how long we've been here and when we planned on leaving... and didn't bat an eye when our answer included four nights.  That's over the limit. But since he said nothing, we stayed on.

Our final day was spent finishing up the deck and visiting with our new neighbors aboard Country Dancer.  Somehow the hours flew by and we had stayed our limit and then some.  We prepared to leave this oasis and continue on with an early morning departure.

This is a GREAT place to stop for a while and with a little luck the tides will be in your favor.  With every new encounter we are gaining experience and skills that we did not have before.  The simplest things become accomplishments and tense anticipation eases with every one.  Tomorrow, we continue on along the winding ICW to find even more dramatic tide ranges, and we wonder what ELSE tomorrow will bring...