What is our purpose for being out here?  Are we here to make time, tick off miles?  No.  We're here to see things.  If we wanted to tick off some miles, we'd be riding the Gulf Stream Northward...  so what's next?  What is there to see? How do you find it?  Looking at a nautical chart, there doesn't seem to be much out here... but when you go looking for it, the information is there.

My friend from Sea Soul  (now What If) told me about a website/app that she uses to find cool stuff to do in the areas we're traveling.  And she ALWAYS seems to find the cool places!  It's called Roadtrippers.  I won't say that the app is perfect, in fact it's a bit quirky for people not traveling on highways, but it has shown me some cool things and I plan on making use of it all the way up the East Coast!  I had my eye on our next stop, found on Roadtrippers...   The Kingsley Plantation. 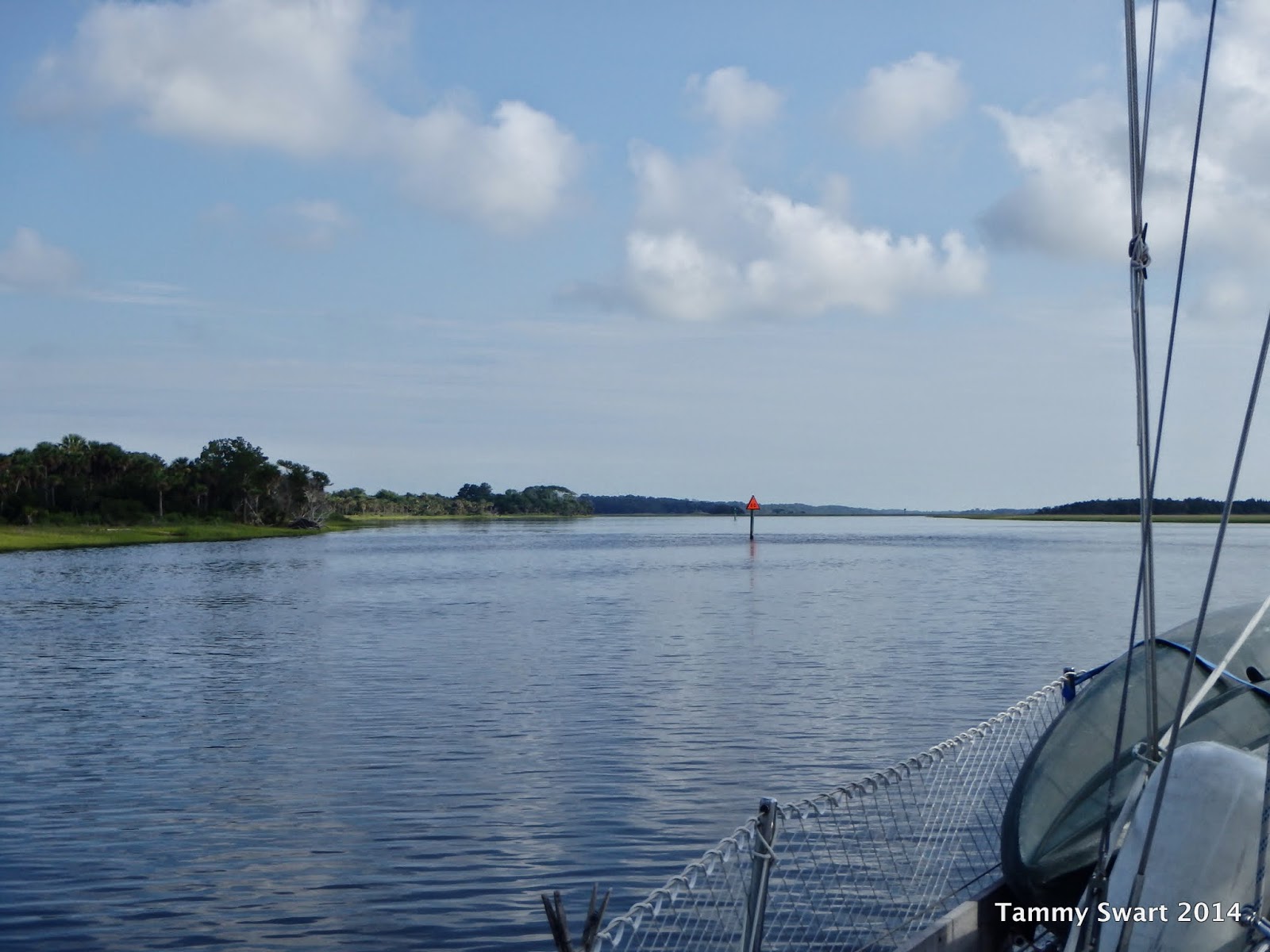 I checked the tide tables in the morning and we decided that it was time to head out.  It was near slack high tide which would make getting off this dock a bit more easy.  We eased right off and turned Northward into Sister's Creek.  The current was dead against us.  The water was glassy calm, hiding the insistent pressure of the tide which held us to a lumbering 3.5 knots.

We were alone in the world as we made our way past four miles of marsh and turned into the St. George River where we would anchor for the night.


Following the deeper water along the Southern bank, we encountered just one bump near the entrance.  I'm not sure that I would feel as comfortable passing over that at low tide.  Note to self:  leave near high tide...  We passed the stately Kingsley Plantation and found a spot to drop our hook just past the last green channel marker.


We only plan to stay one night so we'll visit the Plantation today.  The outgoing tide isn't due to switch direction until mid afternoon.  With this being so, we figured that we could leave the boat and be back before the tide turned.  We wanted to be on the boat for that. 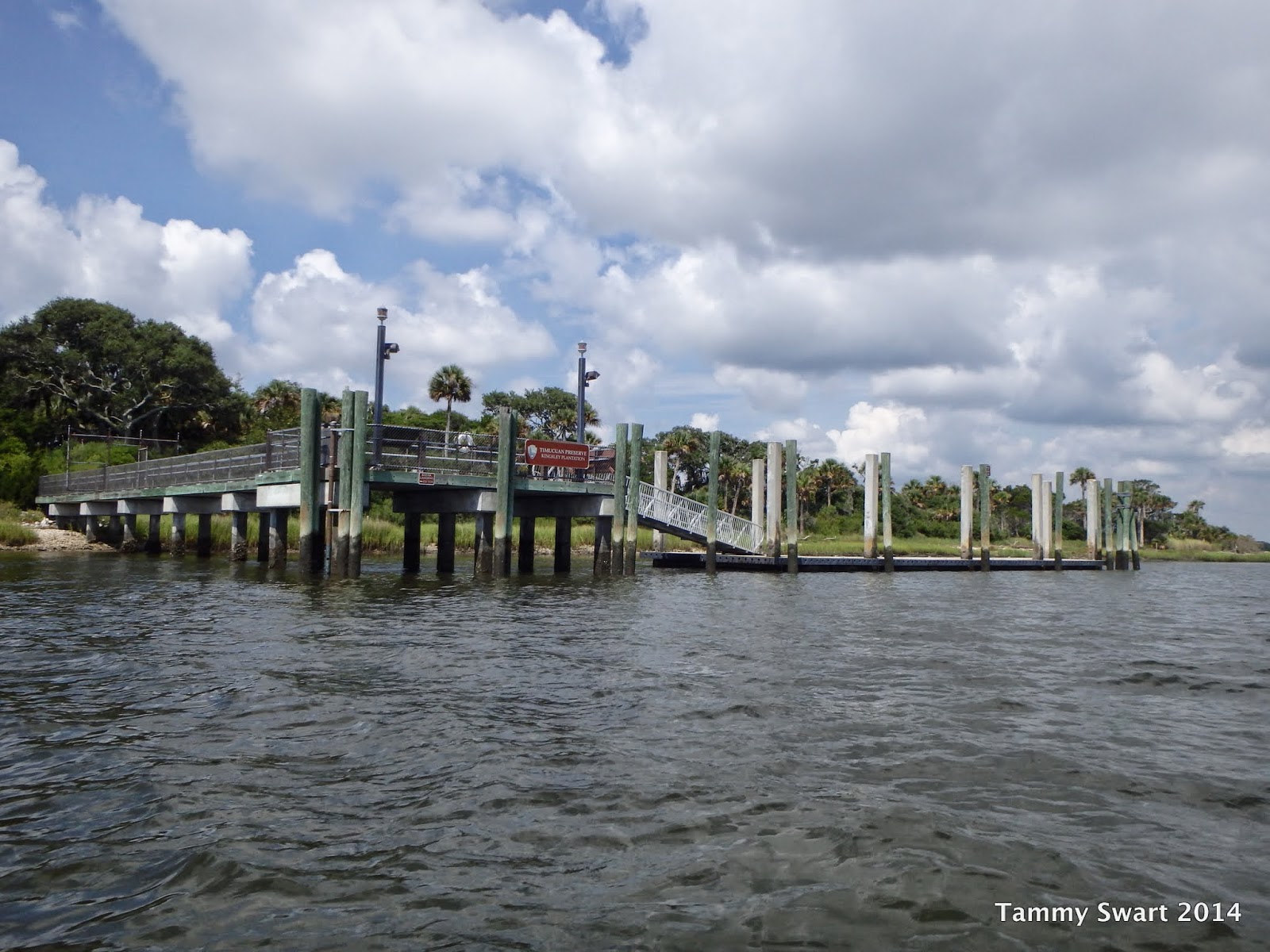 The Plantation has a nice dock for use while visiting.  They post a 59 minute limit but they told us you can stay as long as you're visiting their place.  There's room for a couple of decent sized boats but the floating dock is protected by tall pilings, so fender boards might be necessary.  We just took the dinghy in.


The plantation has a self guided walking tour.  You check out an iPhone with stories that are triggered by your location on the grounds.  There are stations that you visit to hear all about the Kingsley's and their time here.


It is a fascinating story and one that is uncommon for the times in which the Kingsley's lived.  They built the Plantation near the inlet and shipped the cotton and indigo grown on the island to foreign ports.  The land was under Spanish rule at the time and their laws were evidently a bit more liberal in regards to slave ownership.

Kingsley owned many slaves.  He was a benevolent master and never mistreated them, although he did expect their behavior to match their station in life.  There would be punishment for a slave who got out of hand.


Kingsley provided quarters for his slaves and treated them well... and they worked his plantation as was the practice in those days.

But... he had more forward thinking ideas about slaves...  He fell in love with one of his slave women.  Her name was Anna.

He did a thing that was almost unheard of in those days... He married her!

Anna had her own home joined to the back of the main house by a long corridor.  Her home was the kitchen house, where she reigned supreme and even owned her own slaves to do the work of the kitchen for the plantation.  Anna was the overseer of the Plantation, even running it in Kingsley's absence.

He educated her and taught her the intricate workings of the Plantation so that she could run it as well as he.  Kingsley gave Anna her freedom, as he did for many of his slaves. 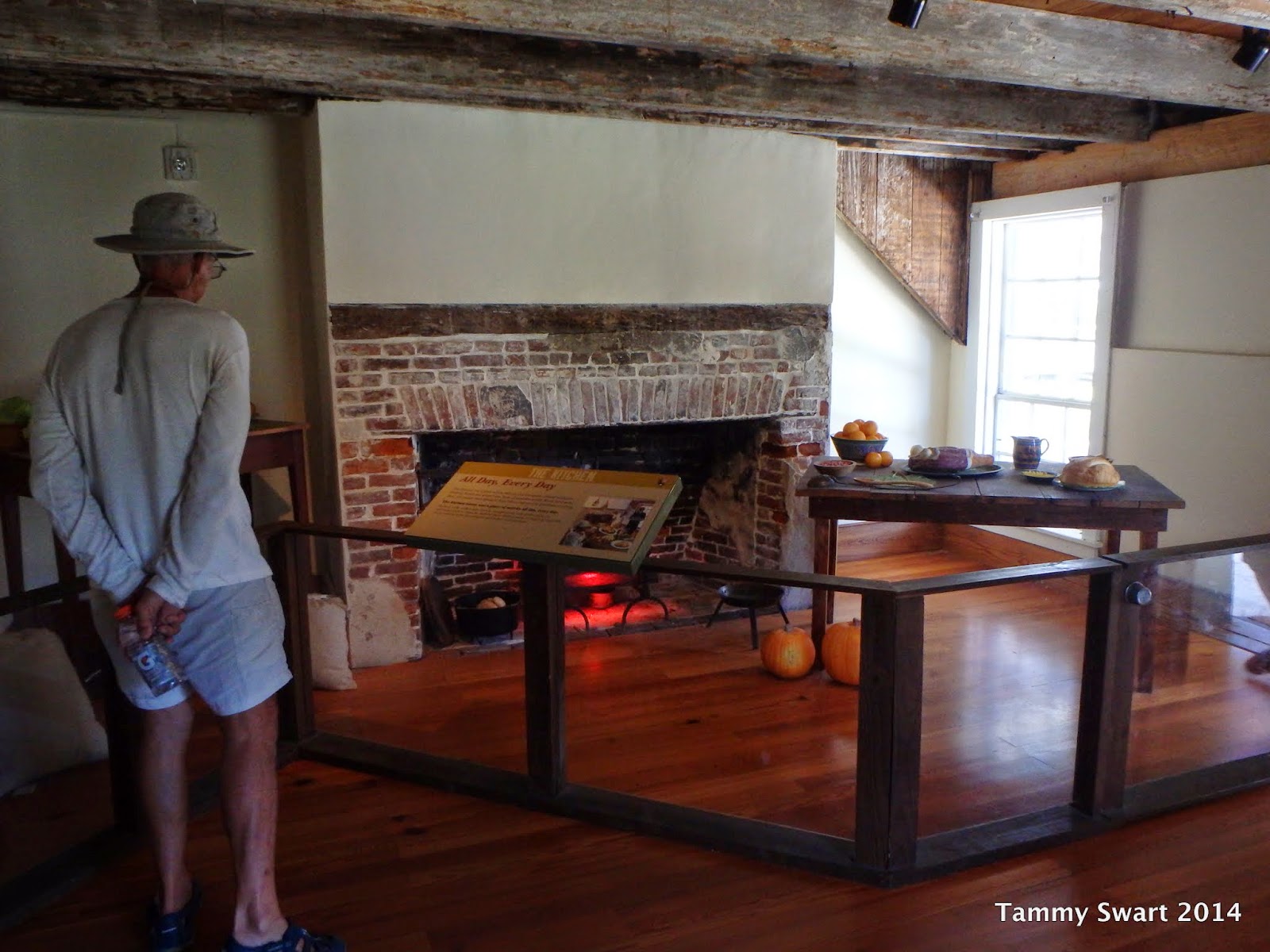 The story becomes even more strange as the Kingsley's were of a religion that practices polygamy.  While Anna would be allowed multiple husbands, she never took another.  Kingsley however, had several wives, but Anna was the "primary" wife and continued to enjoy top status on the plantation.  The other wives were never given the education she was, but remained as sisters to help Anna.


When Florida became part of the United States, the changing times and fear of slave uprising made the Kingsley's views on slavery unpopular.  Kingsley eventually moved his family and some of his slaves to Haiti.  The Plantation was sold to his nephew.

It is a fascinating story and it started us thinking about the way in which society views slavery today.  It sparked many hours of conversation about the subject between Bruce and I, and I couldn't help but wonder about some things... 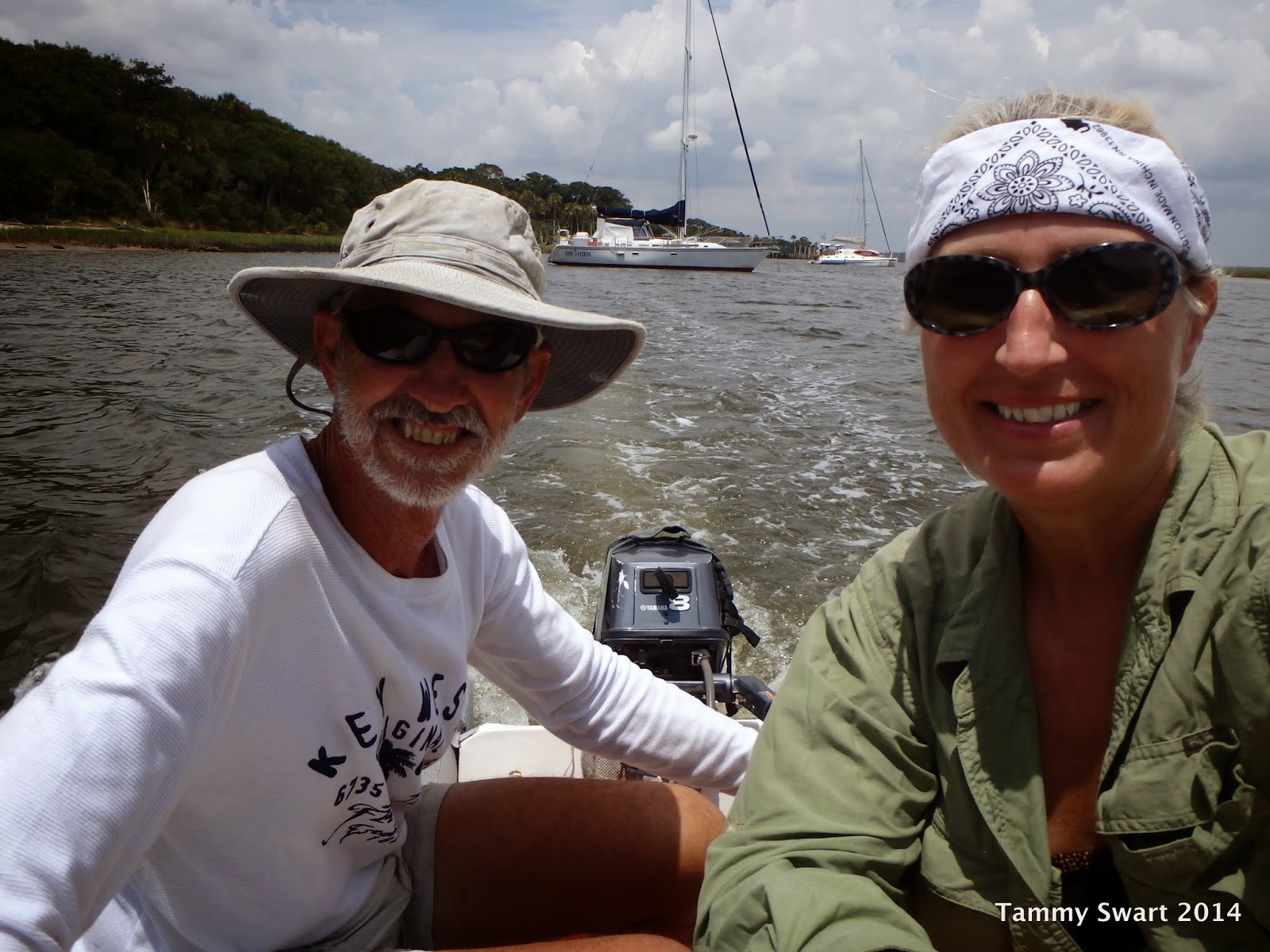 We enjoyed our visit to the Plantation and the anchorage.  We marveled as we sped around looking for a beach, that this spit of land was completely covered by water when we arrived.  I'm glad we didn't try to anchor in this nice looking little cove... 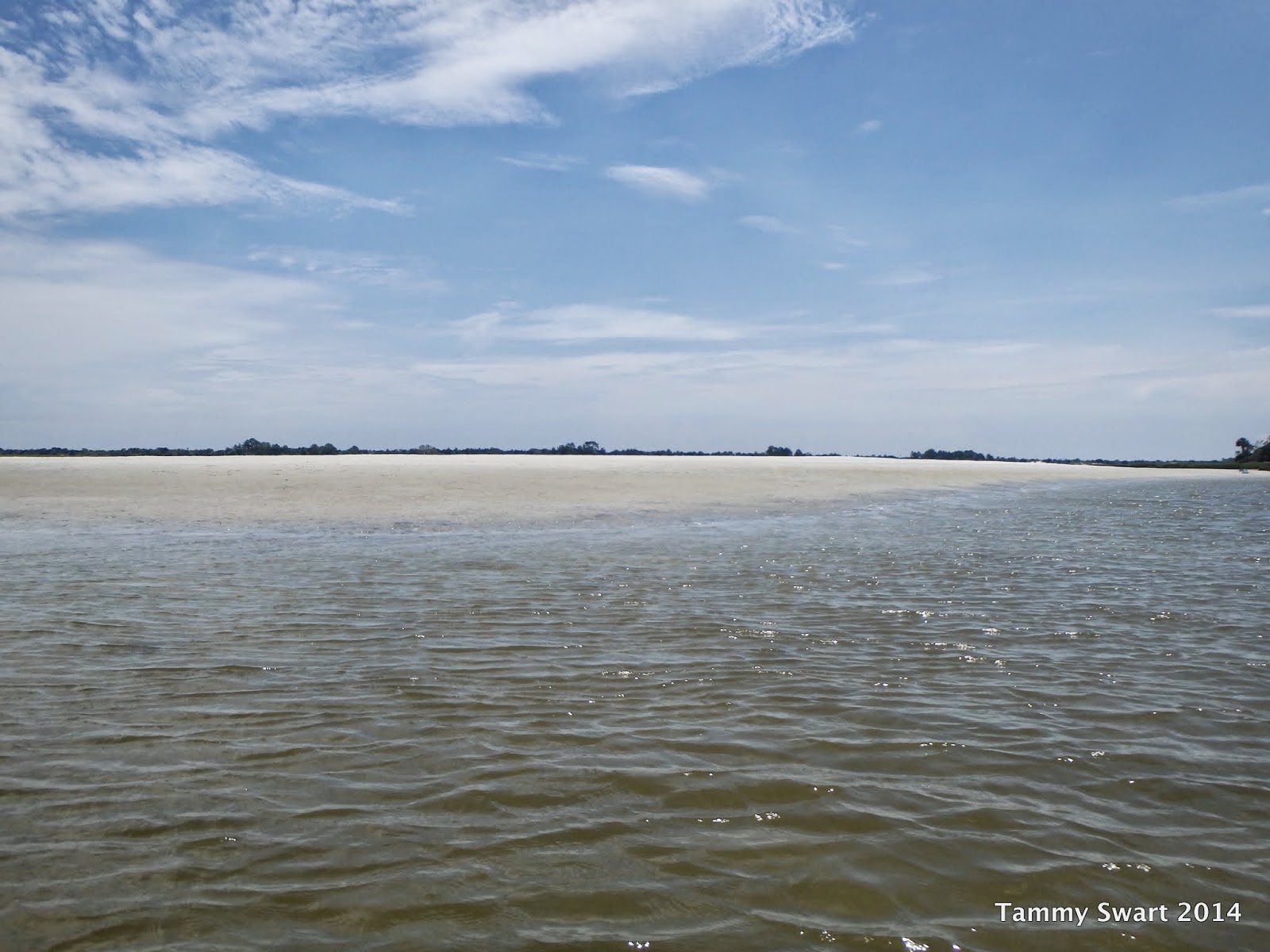 We enjoyed our evening here.  Holding was excellent, we never budged with the changing tidal current.

It is sublimely peaceful here with only the birds, dolphin and even a manatee for company.  We did see a few boats passing by, but most were nice enough to slow down.

Leaving on the high tide while it was still incoming the next morning was a snap.  We are SO glad we found this little side trip treasure.  There is just so much out here to enjoy when you aren't in a hurry.  Next stop... Fernandina Beach!