A Harbor With No Name 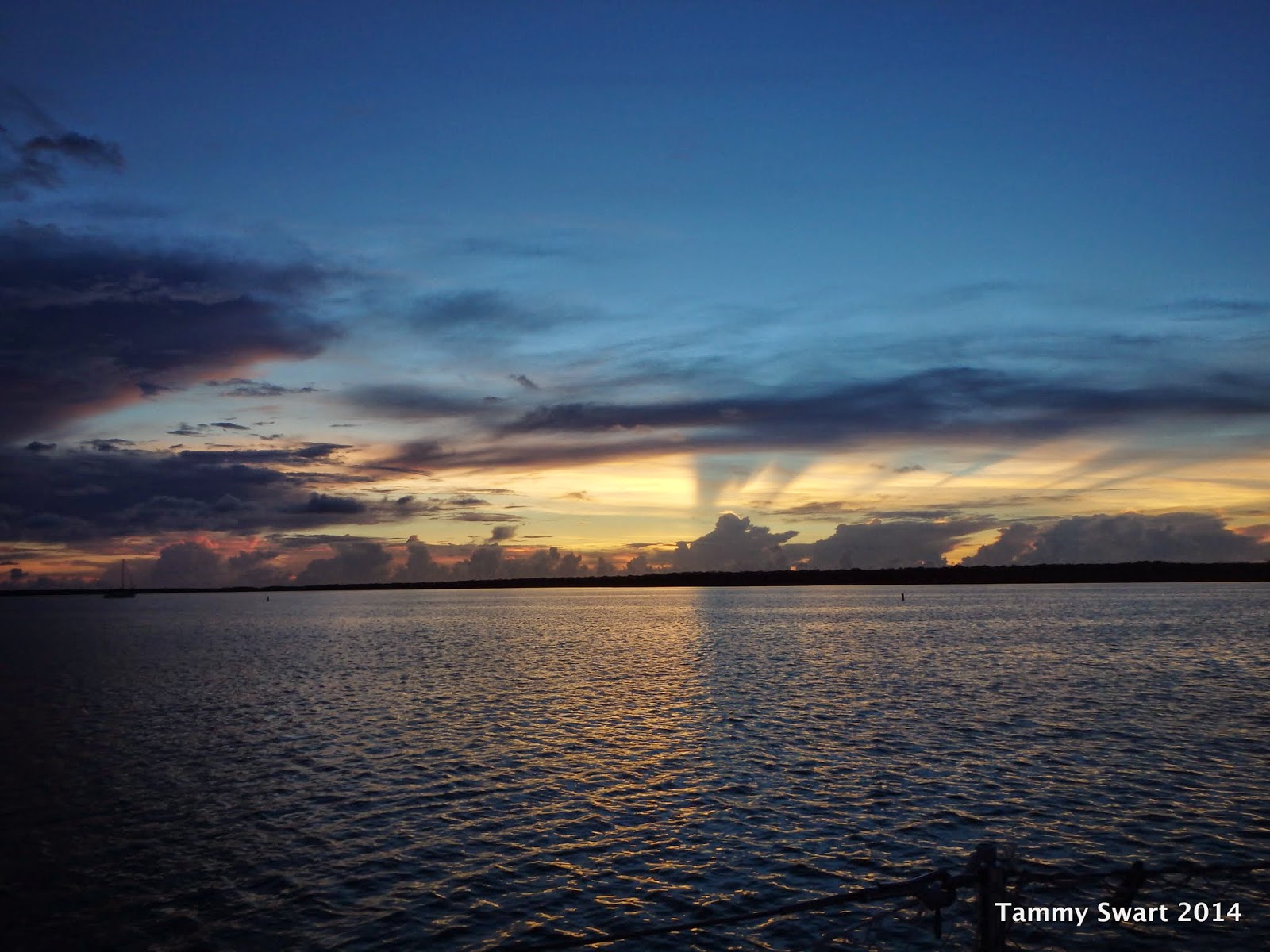 As far as cruising plans go… today did not follow ours.  We decided at about o’sunrise thirty that we would leave our anchorage off of Elliott Key, foregoing unfinished pleasures there to move on to Crandon Park Mooring Field.  Key Biscayne looked interesting to us and it would be nice to be able to fill our water tanks and maybe take a bus ride into Miami to see the sights.  It’s Friday and the weather looked like Monday could be our day to head offshore for Ft. Lauderdale.  That left us the weekend.

We pulled anchor and shut off the engine to sail wing on wing immediately after the anchor was stowed.  It was fun to try to keep the jib full without going to the trouble of rigging the whisker pole.  Yes, I know we went to great trouble and expense so that we would HAVE one… but our distance was short to the magenta line which would have us turn up and sail on a broad reach to our next destination… hopefully. 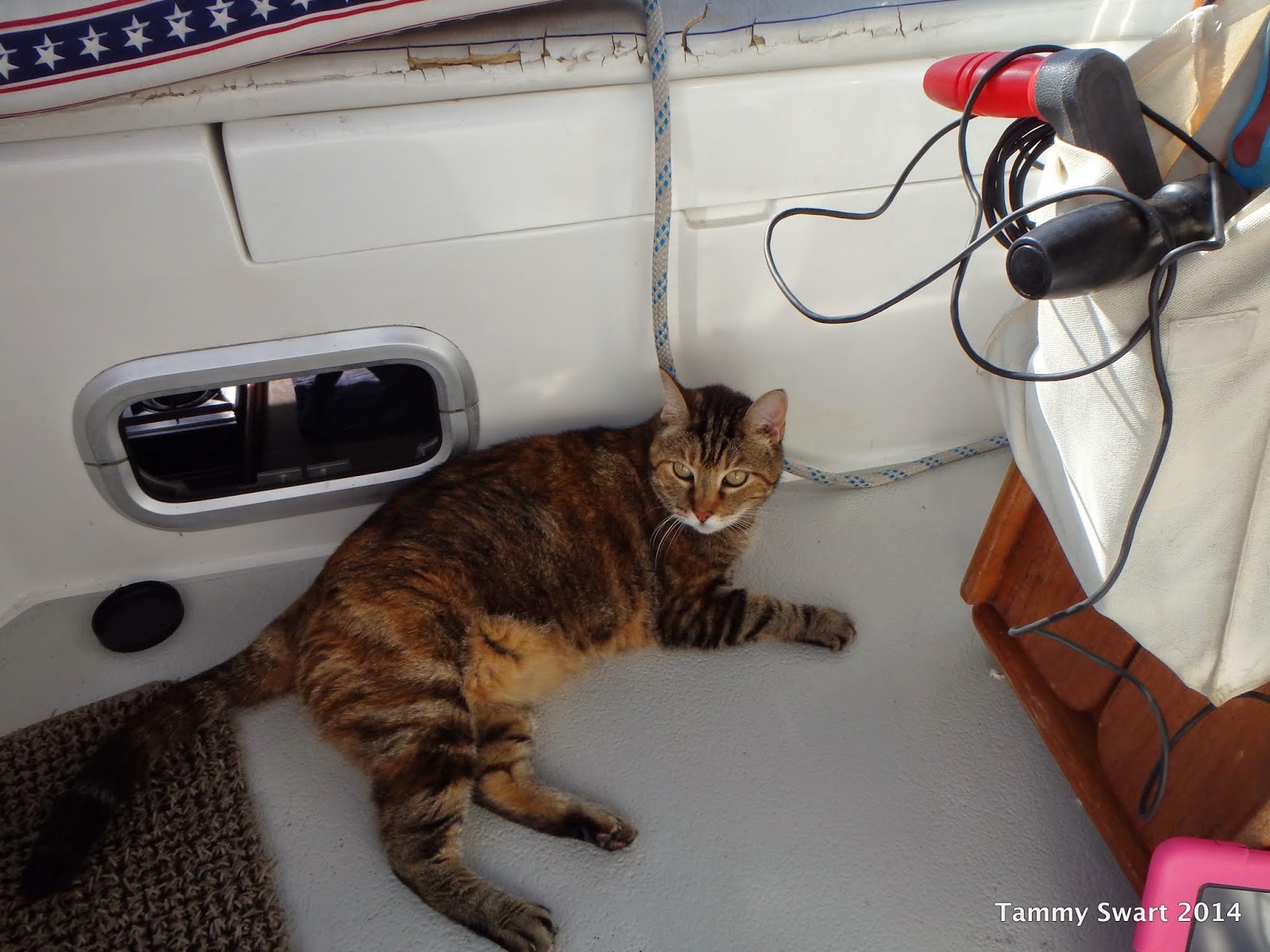 Bruce trimmed and tweaked sails as we made that turn and, yes!… we could sail this.  The ride was so smooth that even Jezabelle came out to sit in the cool cockpit with us.  We weren’t going fast, but we had all day to get there.  And then I made that phone call to Crandon Park Marina.  The one that left us without a destination and scrambling to choose another one.  No Room!!! 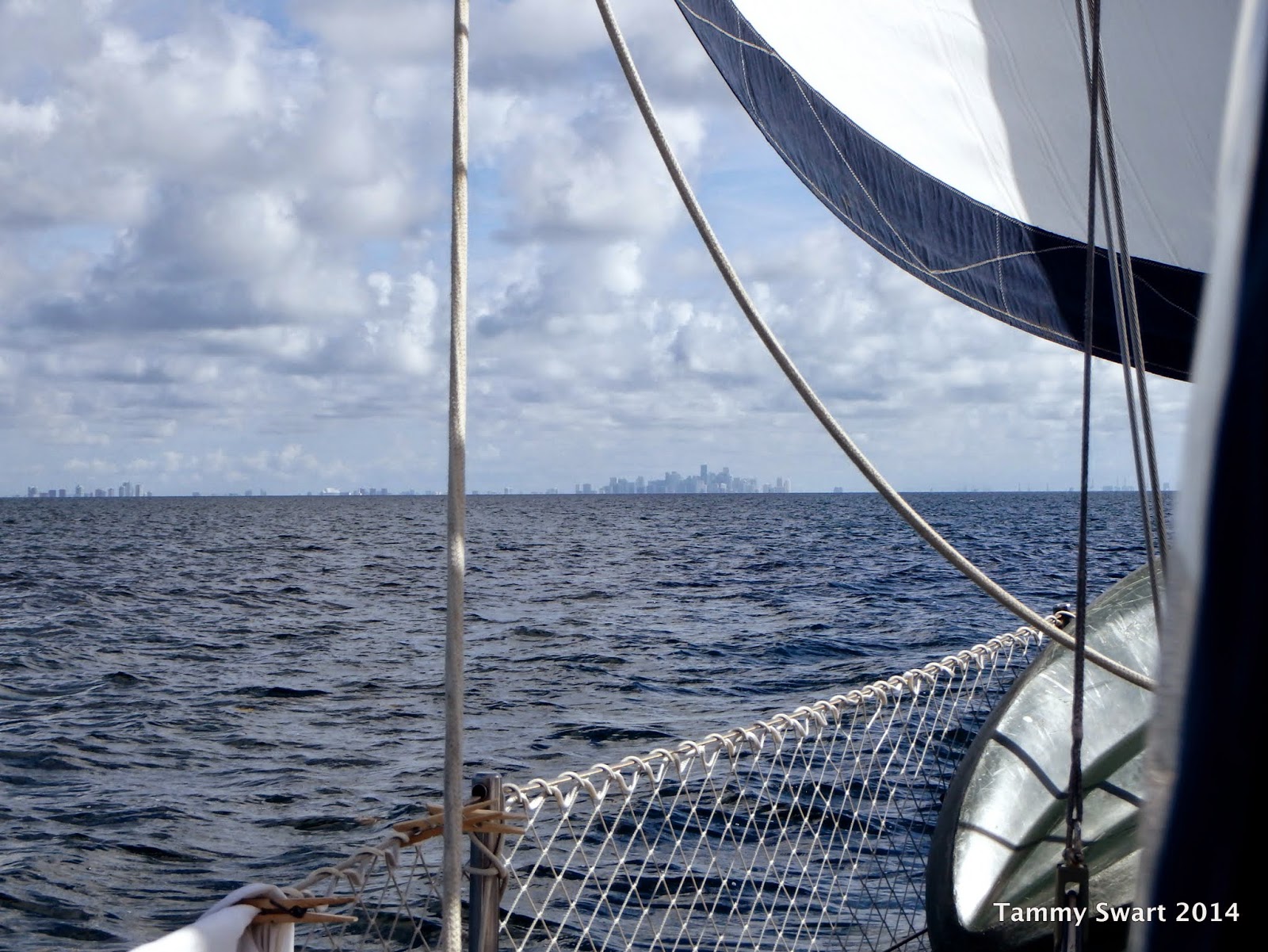 Thanks to the miracles of the internet and our close proximity to the big city and it’s lovely 3G connection, I quickly found several spots to choose from, and based upon its position within the Bill Baggs State Park (with the allure of another lighthouse to visit), and the free pump out offered, we chose No Name Harbor.  I wasn’t totally happy with it, but hey, some friends had spent two weeks there waiting for a weather window for the Bahamas… so it couldn’t be bad. 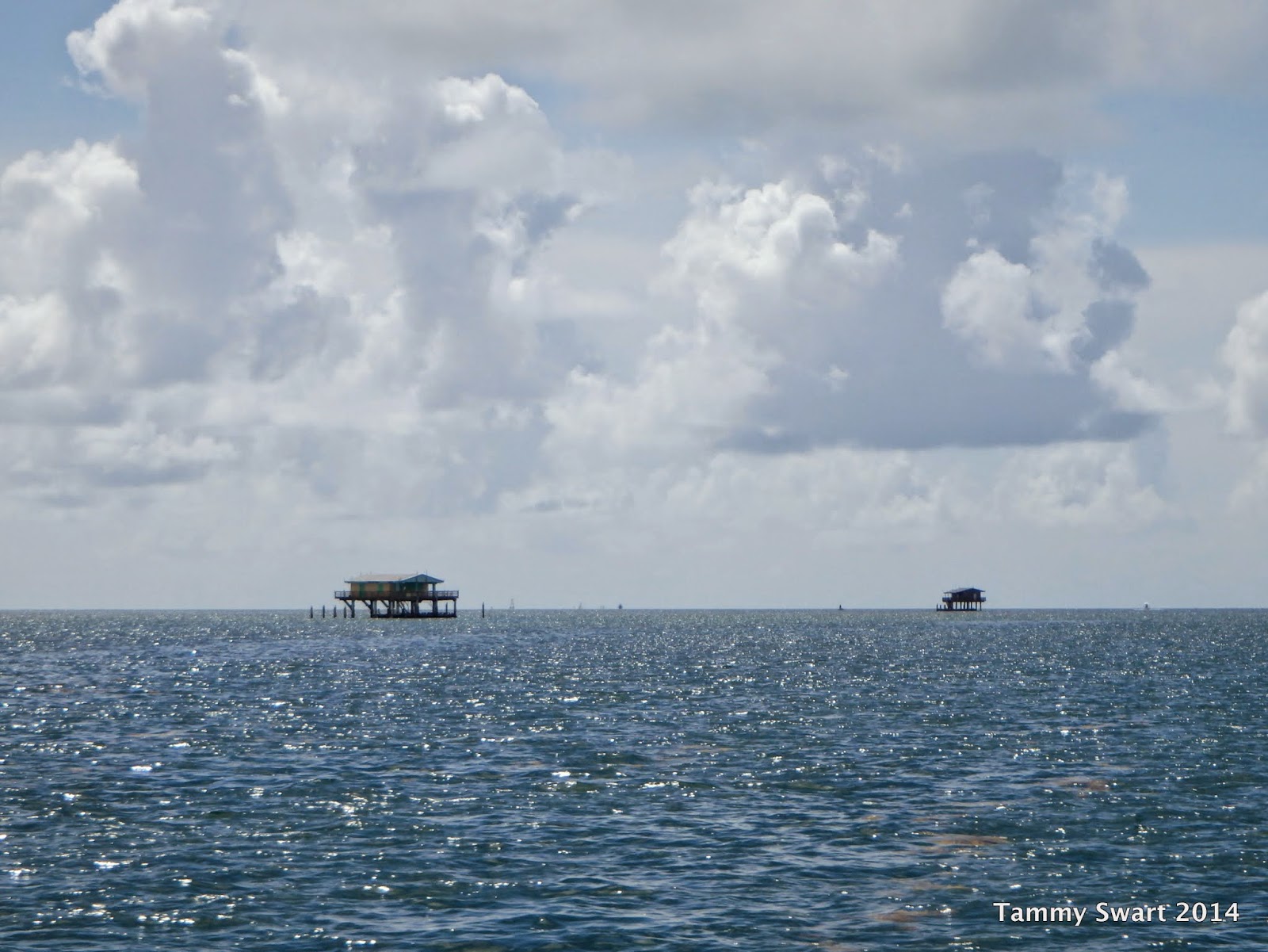 We made a minor adjustment to our course after doing a drive by of Stiltsville.  These are seven structures rising out of the shallow banks of the Coral Shoal, where back in 1933, it is said that the first shack was built to facilitate gambling, which could be conducted if at least a mile offshore.  Later the others were built probably as fishing shacks and they remain today in limbo while the government decides what to do with them.  We got close enough to see them and they reminded us very much of the fishing shacks along the ICW south of our home. 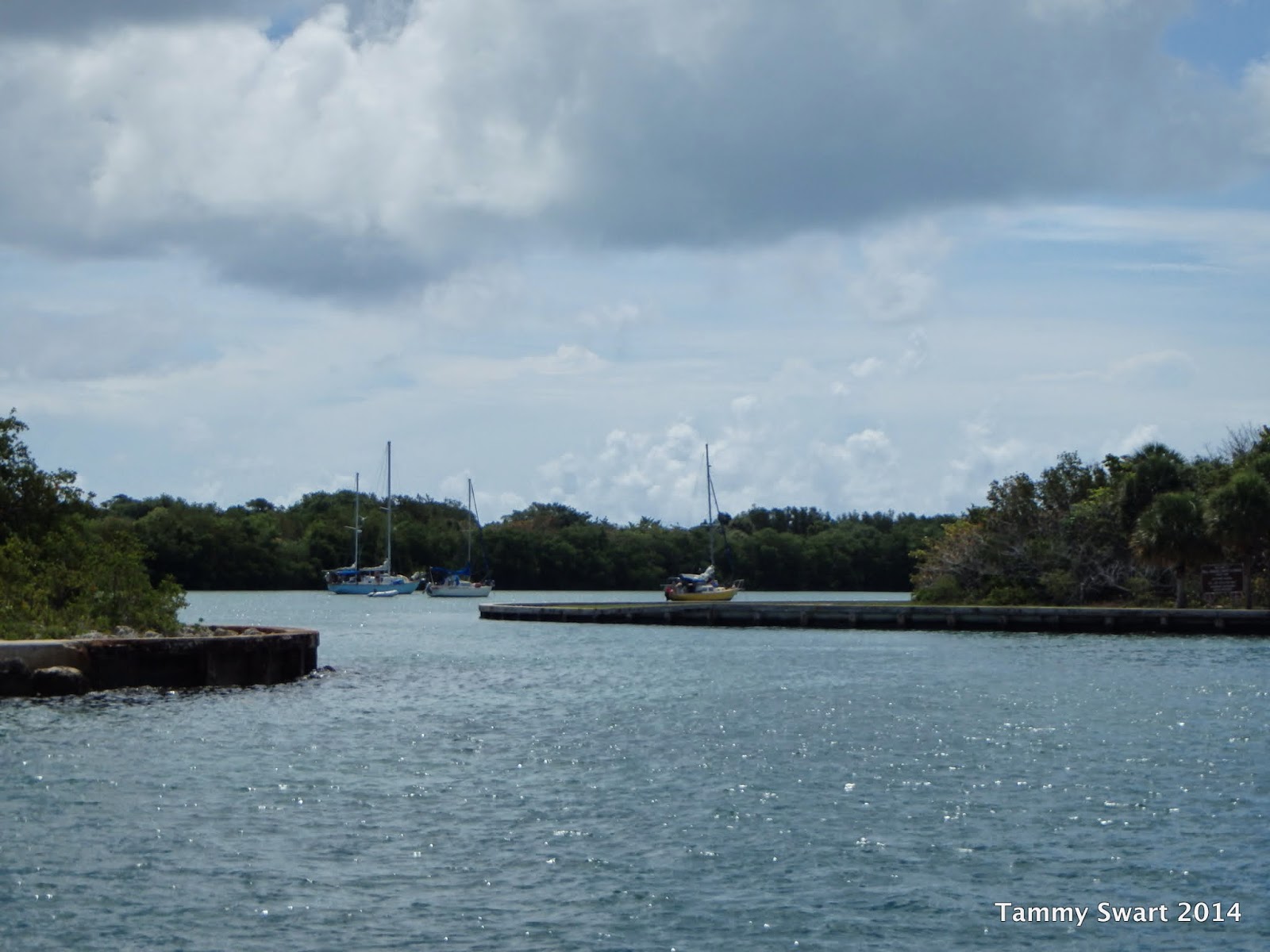 Just a little further on, we turned into the Cape Florida channel which lead us to the entrance to No Name Harbor.  We went right to the pump out station to “relieve ourselves” as things had been getting a little bit tense…  They have a self serve pump there that is simple to use.  The approach was easy with good depth and, if the bulkhead was a little rough, they can be forgiven for the fact that the machine is in good working order and free. 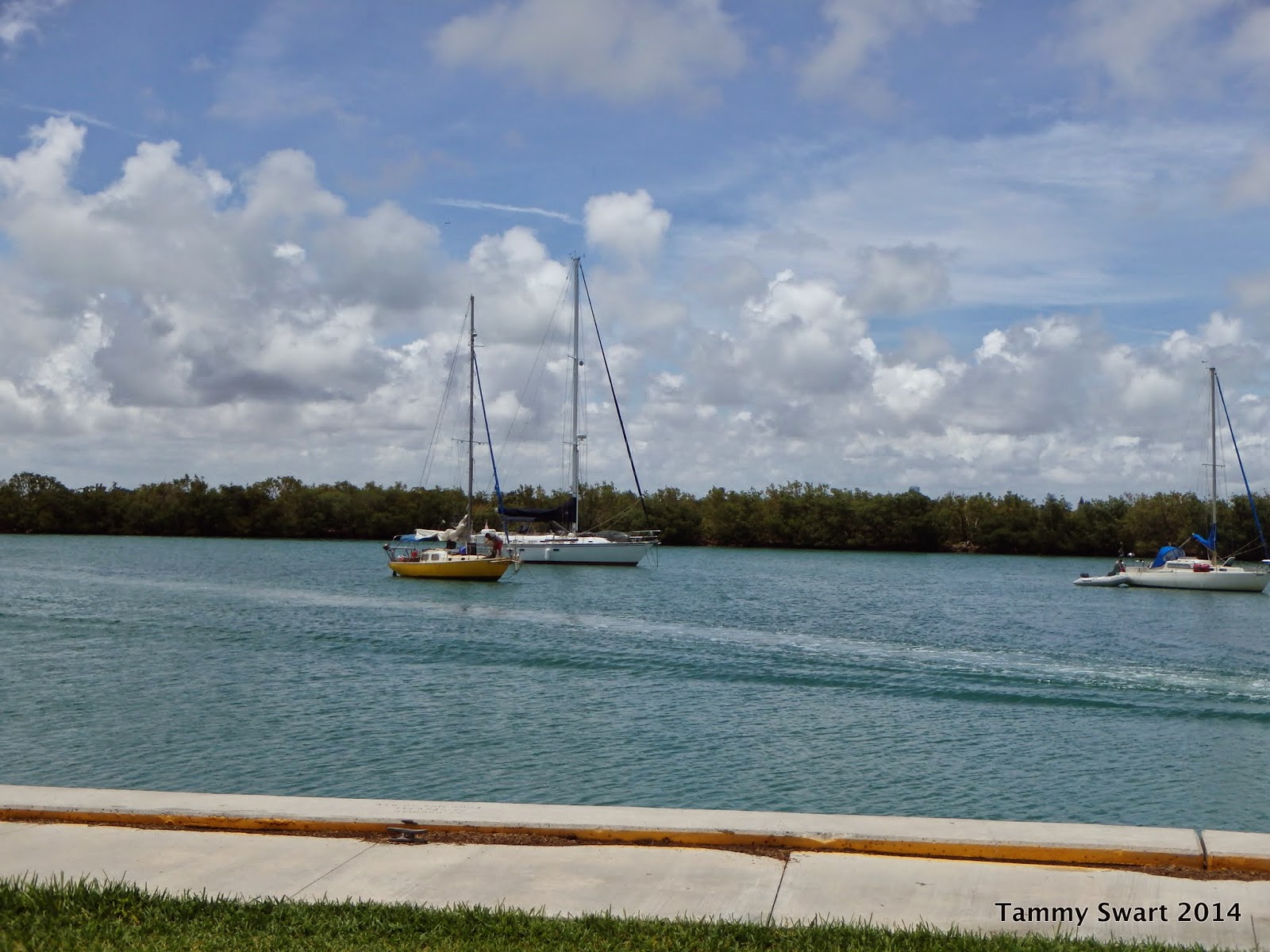 We secured the boat at anchor in a spot far back near the entrance in hopes of picking up a breeze.  It was HOT here surrounded closely by mangroves.  I had not expected this anchorage to be as tight as it is and was thankful that there weren’t too many boats at anchor upon our arrival, especially being that it was a Friday.  We had heard that this is a popular weekend spot for locals and can become quite packed. 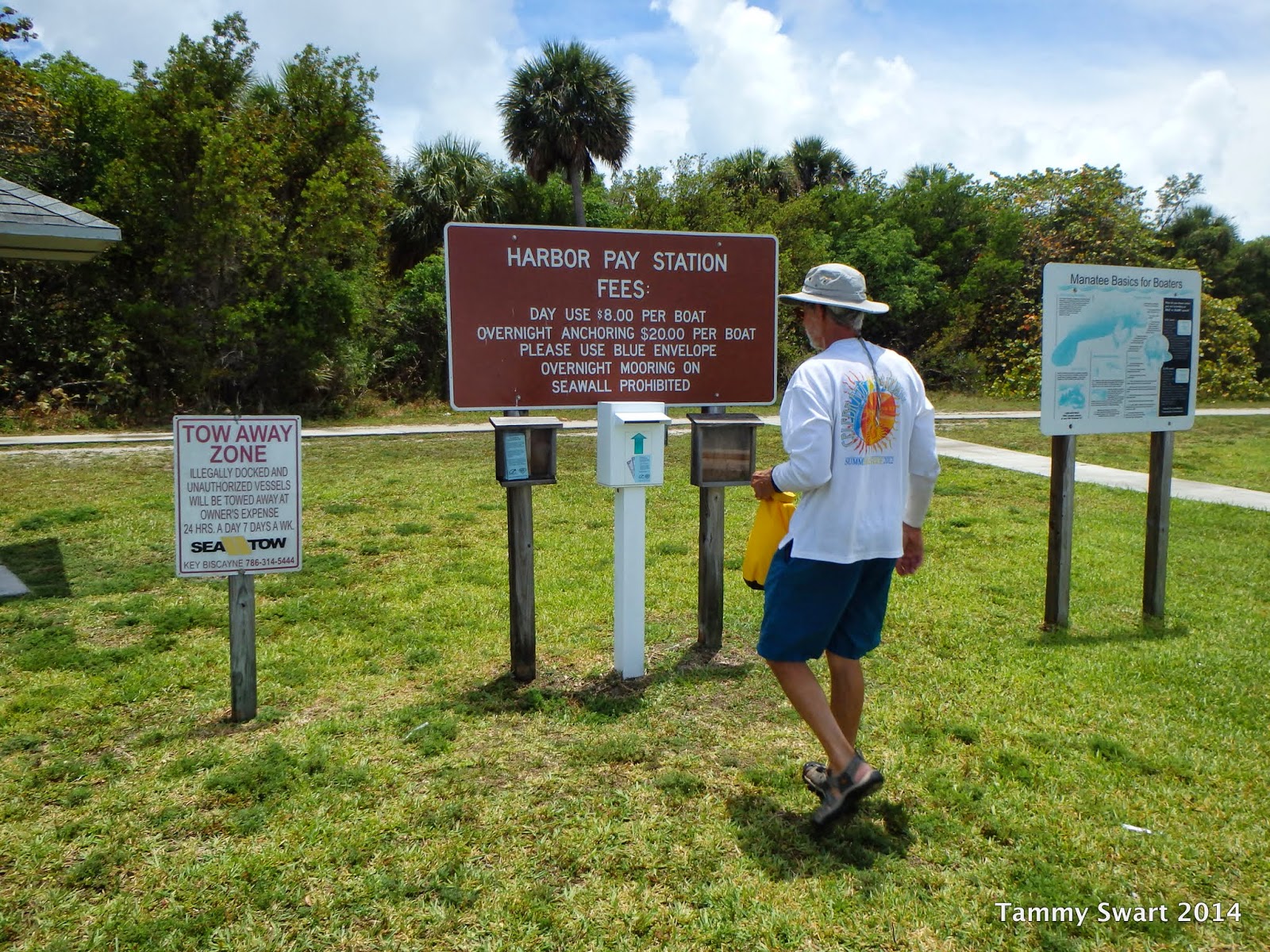 Once we had things settled, we went ashore to pay our park fee, which is on the honor system.  I was a little bit miffed that we would be expected to PAY at an anchorage, but hey, if we can go ashore into the park to get a look at the lighthouse and maybe top off a water tank while we’re here, I can roll with that. 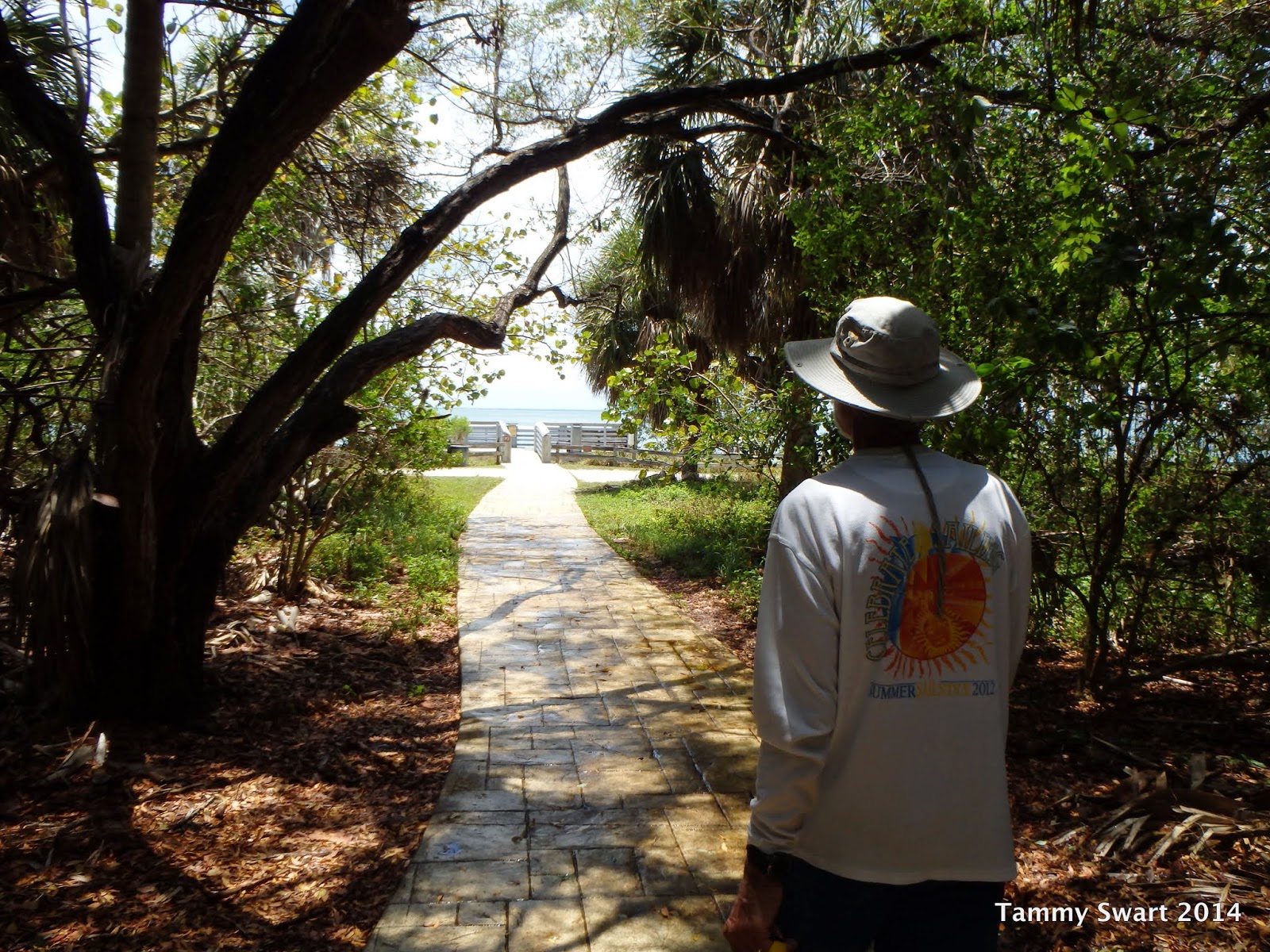 We found the bike/walking trails to be a cool respite from the steamy post-rainshower air.  We walked along beneath a canopy of overhanging trees.  The park is very well kept and very clean. 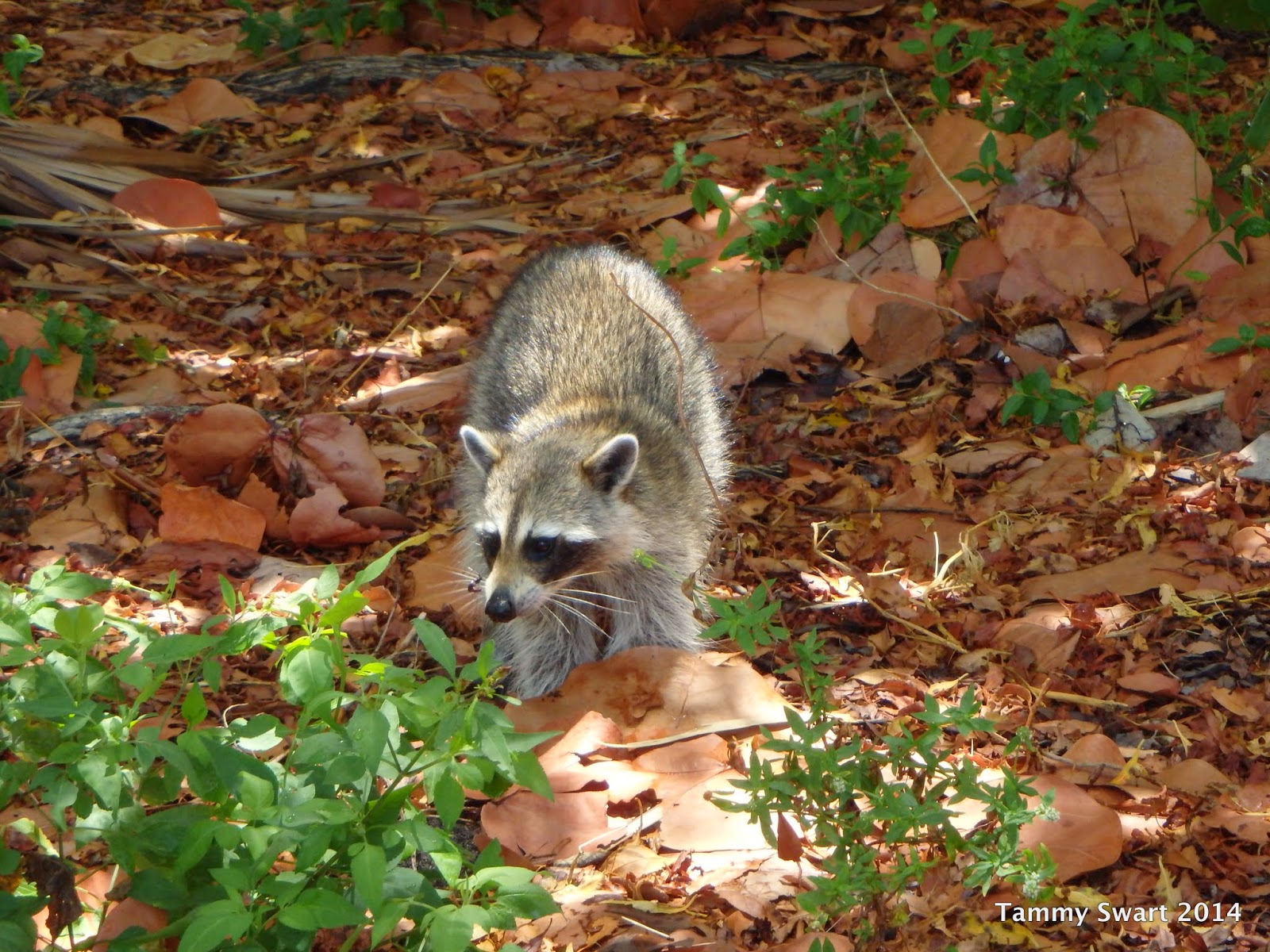 We came upon a fluffy raccoon who was foraging for food and seemed completely unaffected by our presence.  He went along with his business of digging in the leaves with barely a glance in our direction. 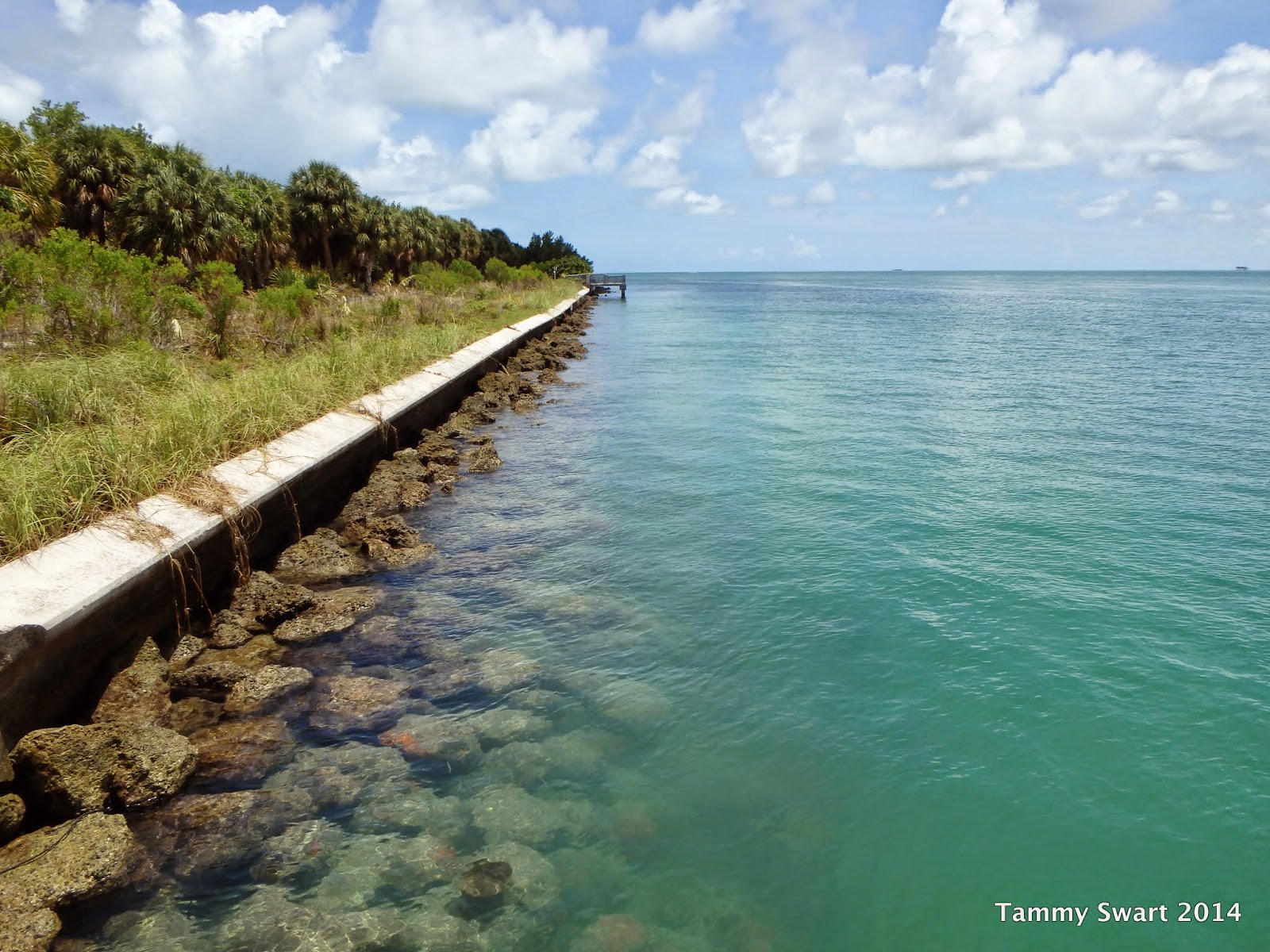 We followed the path around the perimeter of lower Key Biscayne to the where the Cape Florida channel joins the Atlantic. We were beginning to despair of ever finding the lighthouse when suddenly it appeared over the treetops. 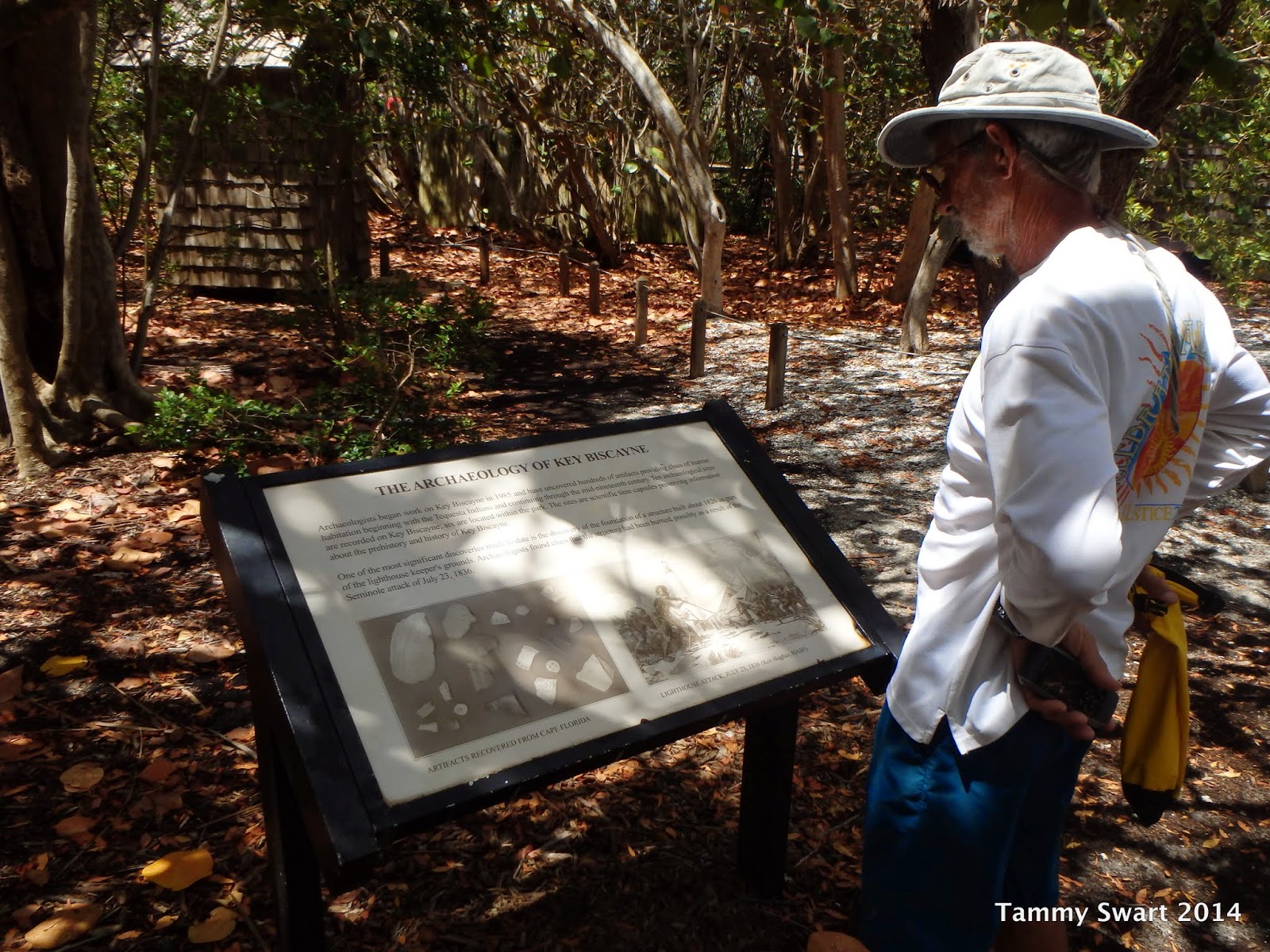 We headed hastily in that direction, and entered the Lighthouse Compound and made our way along the neat pathway past the Keeper’s Cottage. 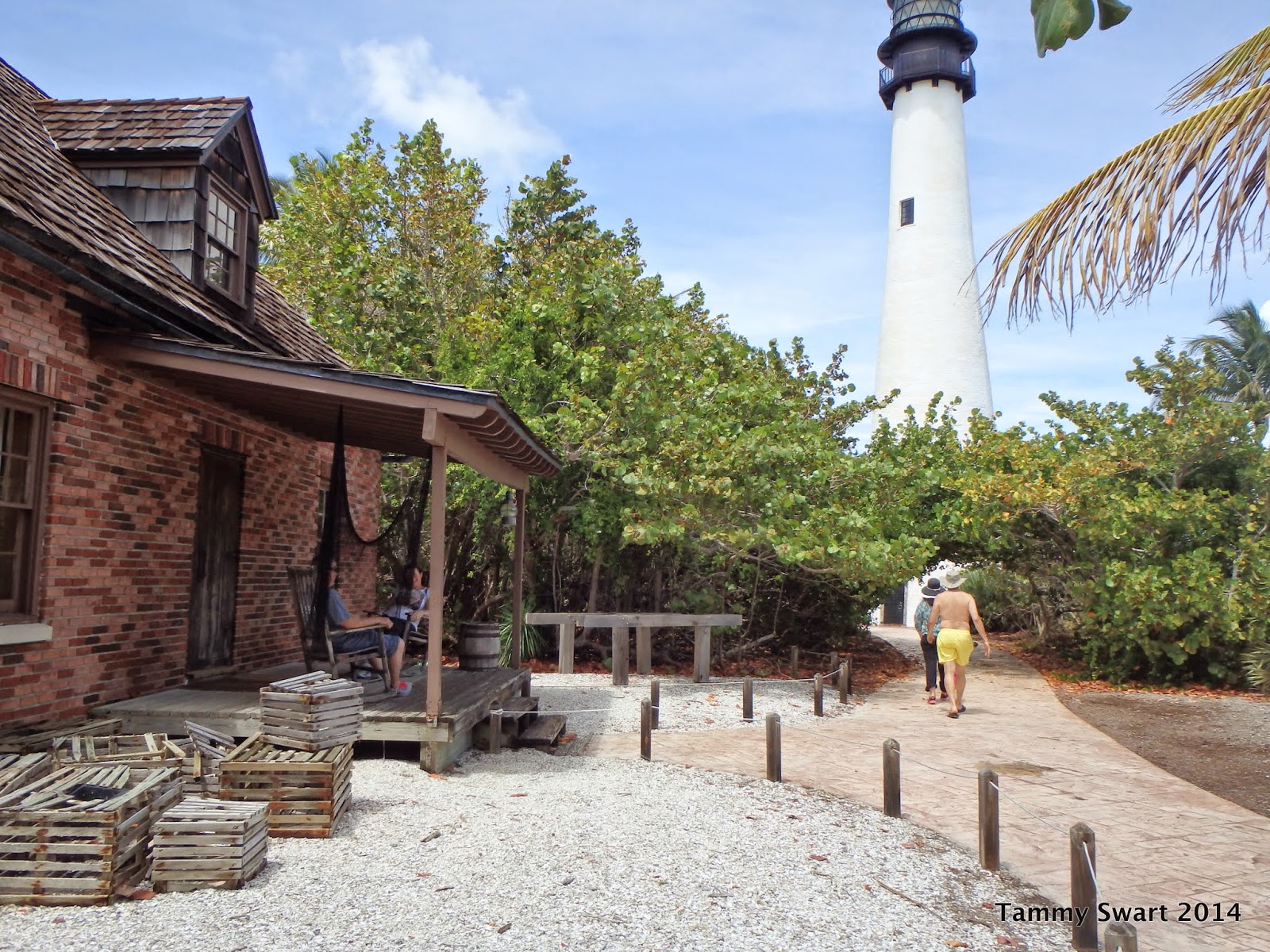 I was impressed with the condition of the buildings and the beauty of the place.  This would have been a GREAT job to have! 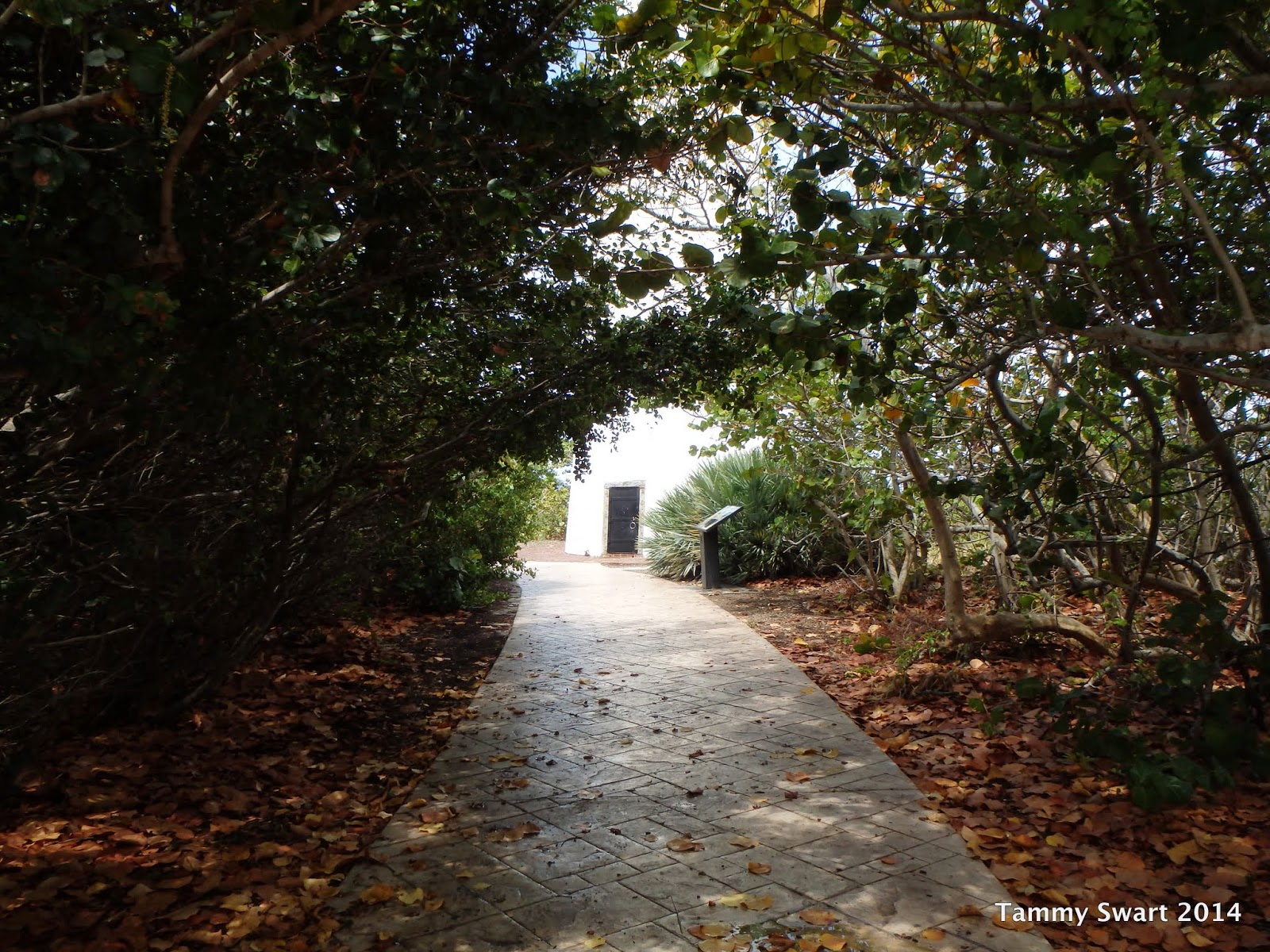 We approached the tower and were disappointed to find the door securely shut and locked. 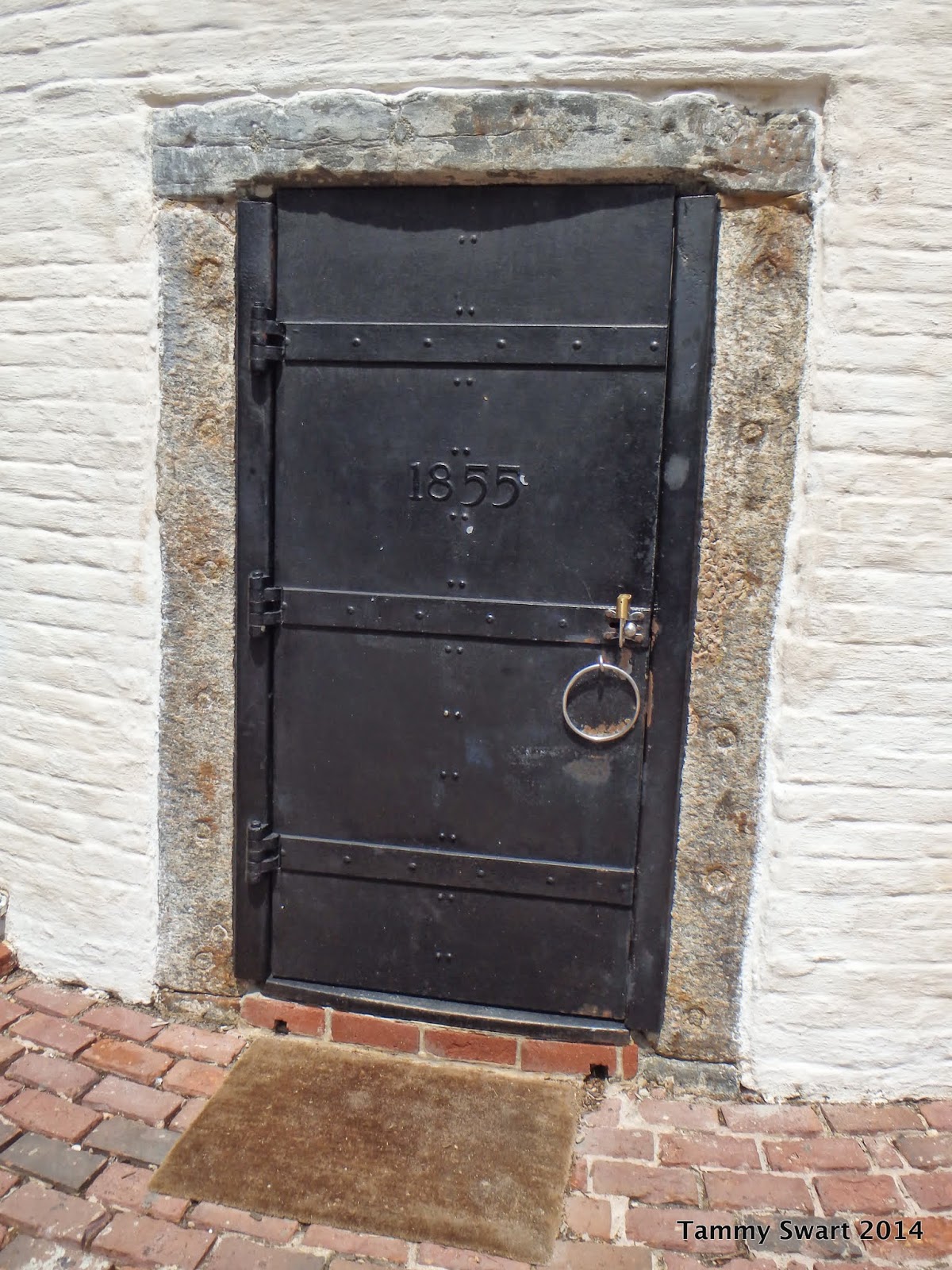 There were only two tours per day, Friday through Sunday… and we had missed them.  I cheered myself with having missed the climb to the top in what can only be likened to a chimney in this sultry afternoon heat.  Our bodies were already feeling the unaccustomed strain from our walk here and would perhaps have revolted had we asked our legs to take us to the top of that tall, tall tower. 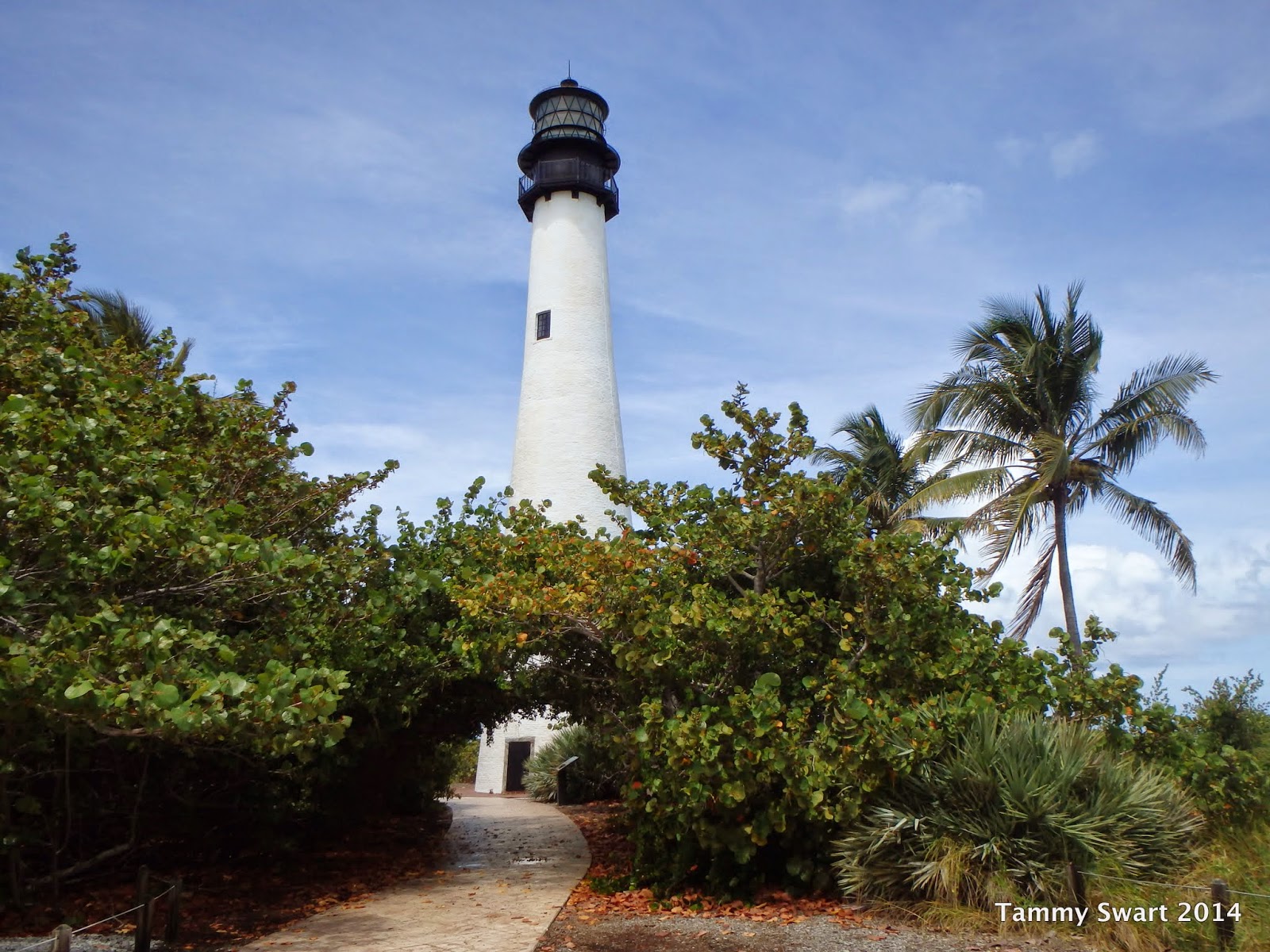 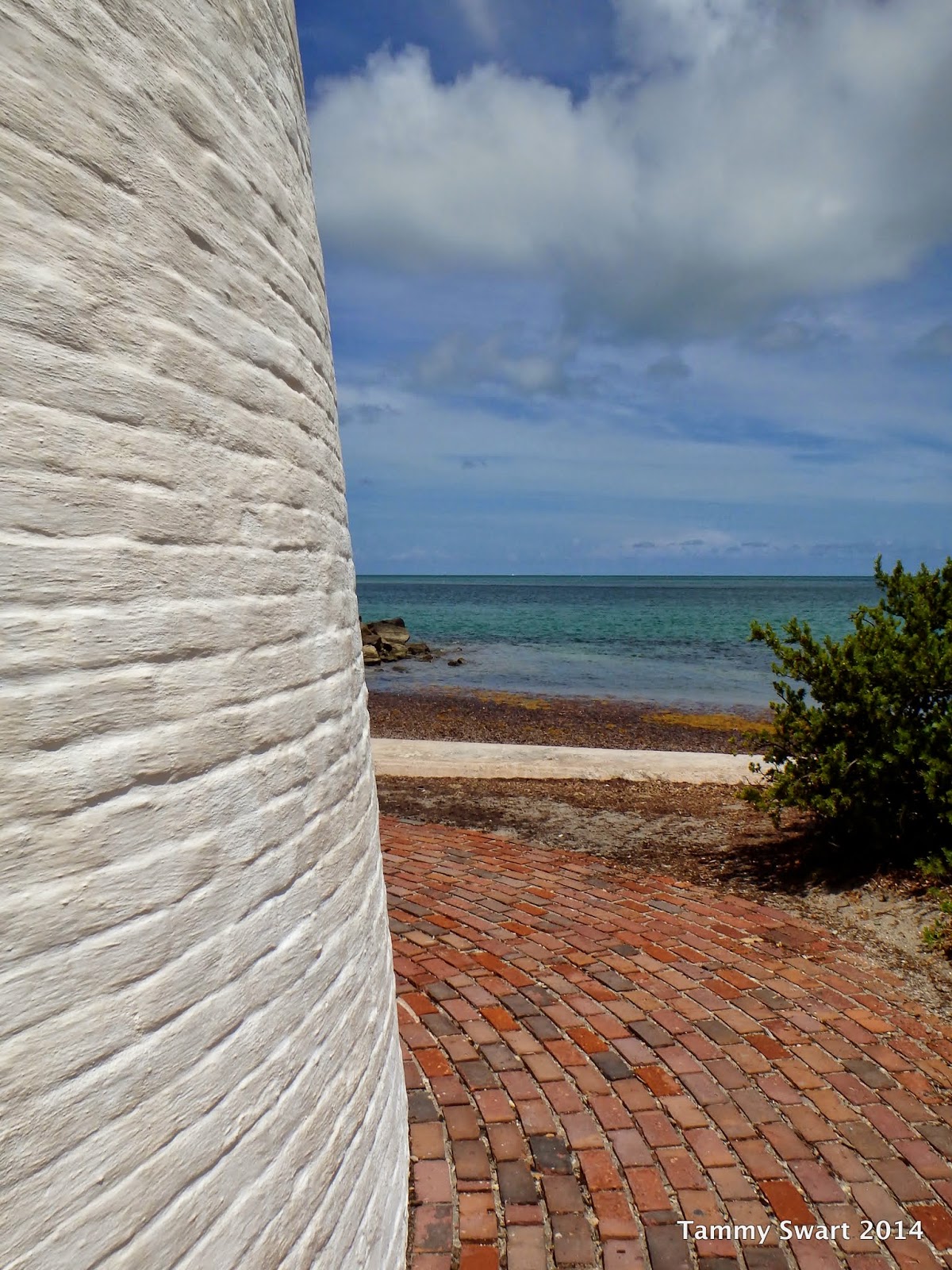 So we made the circuit around the base and followed a treelined walk past the remaining portion of the exhibit.  We paused and viewed the old pieces of lighthouse equipment and turned our hot and tired feet towards where we hoped we would find a beach! 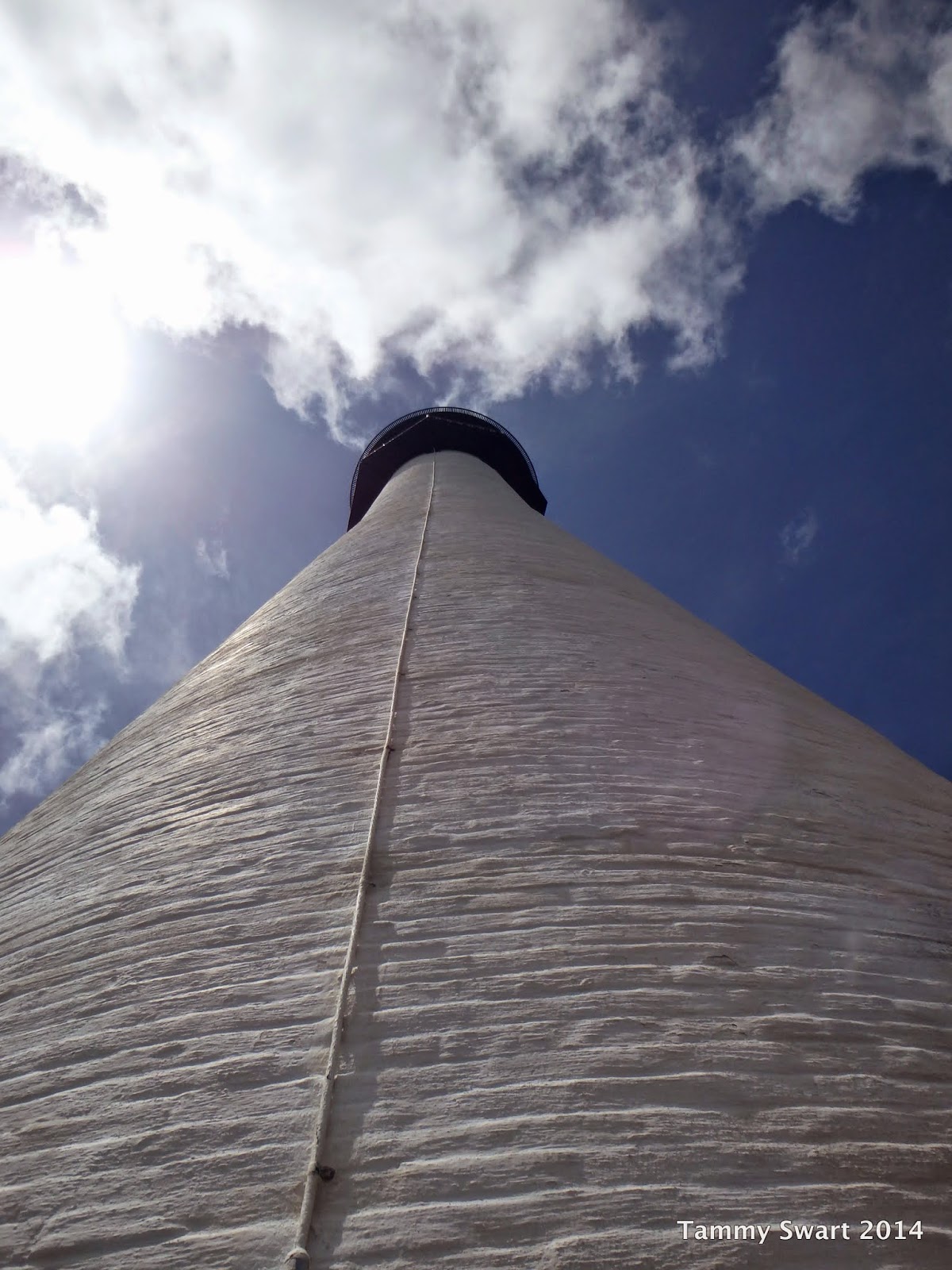 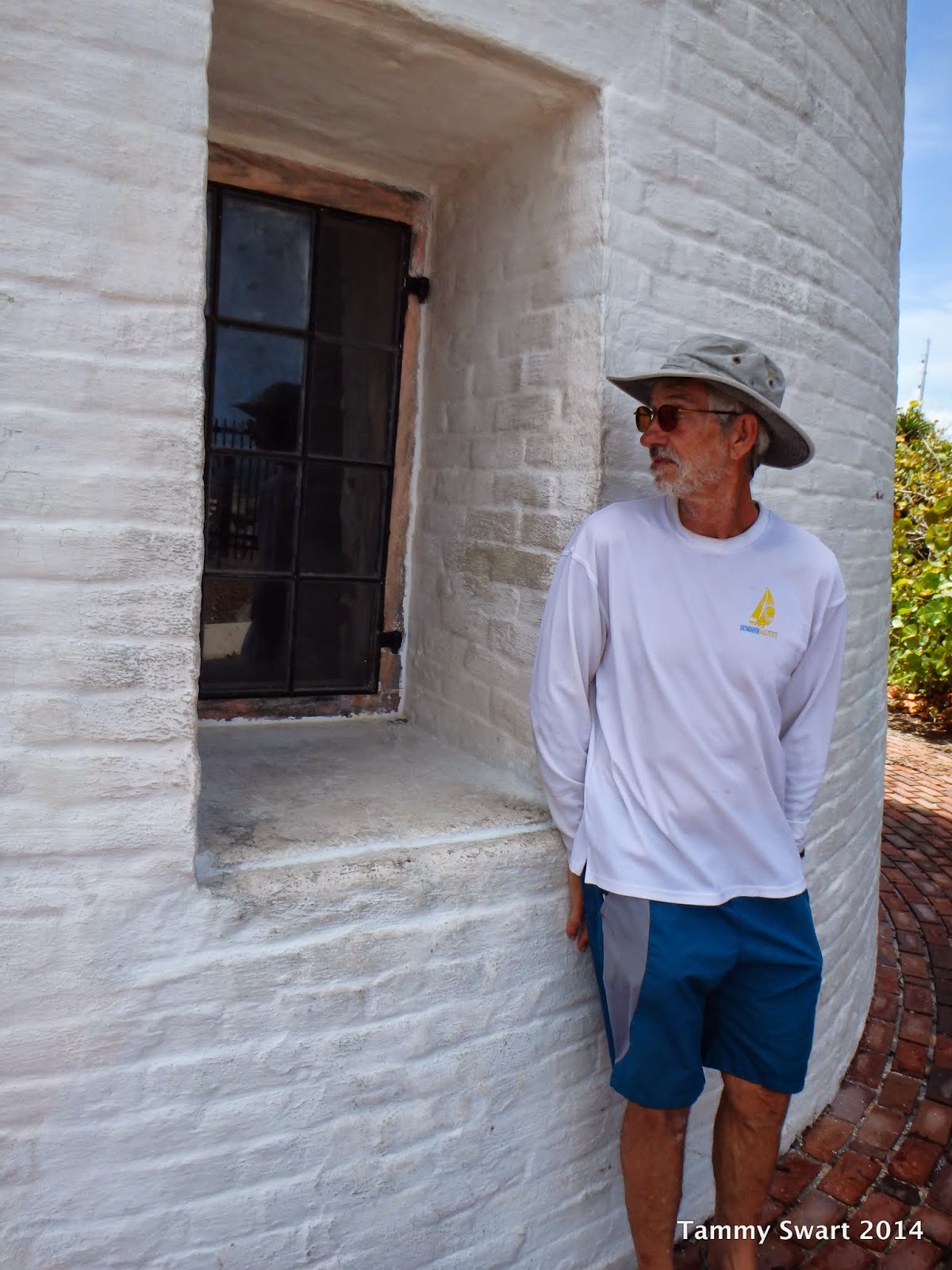 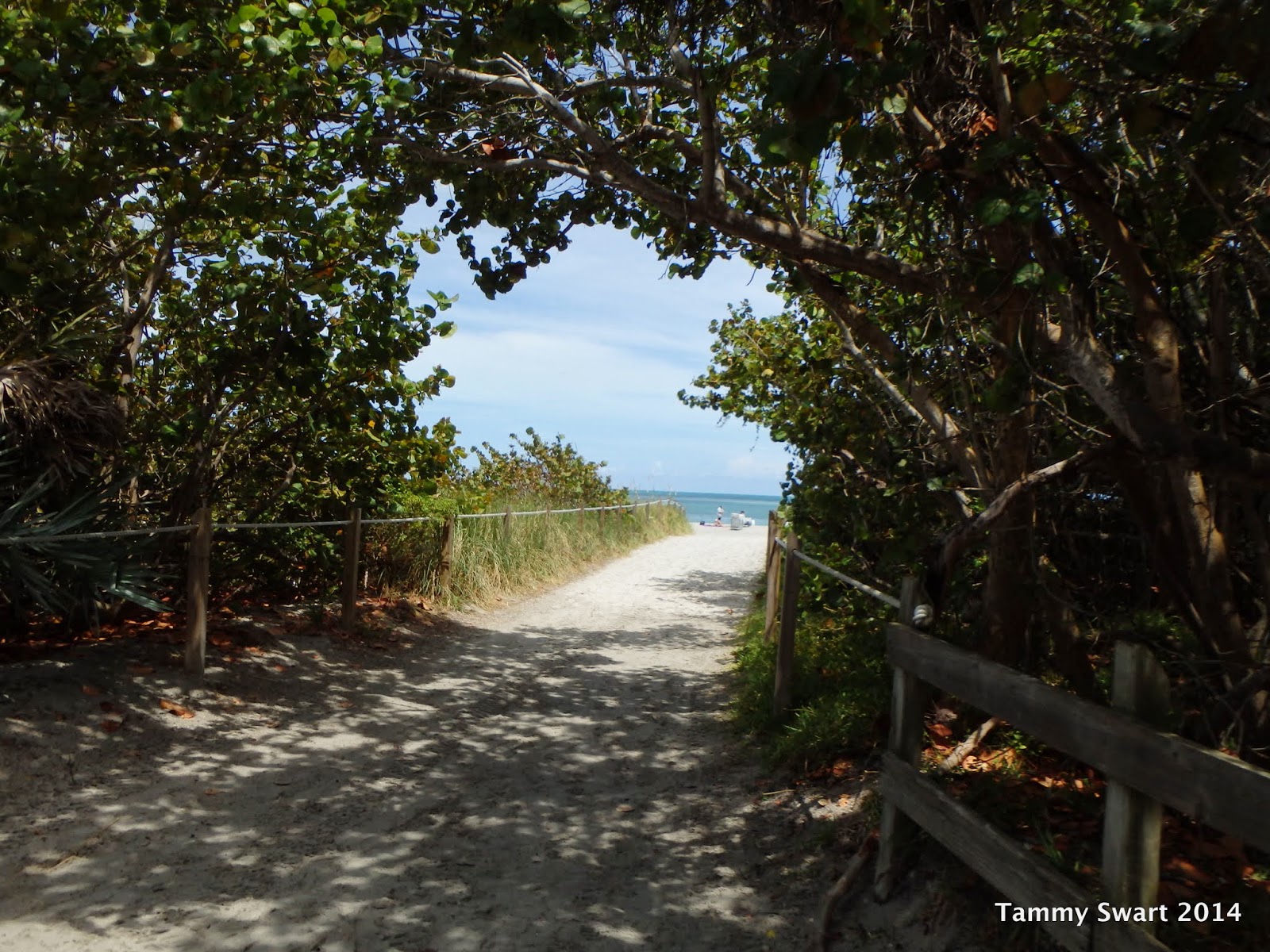 Yes, we found the beach access!  It was as one would expect of Florida by now… very nice.  We found another striking view of the Lighthouse as we emerged onto the beach.  Nice touch Florida! 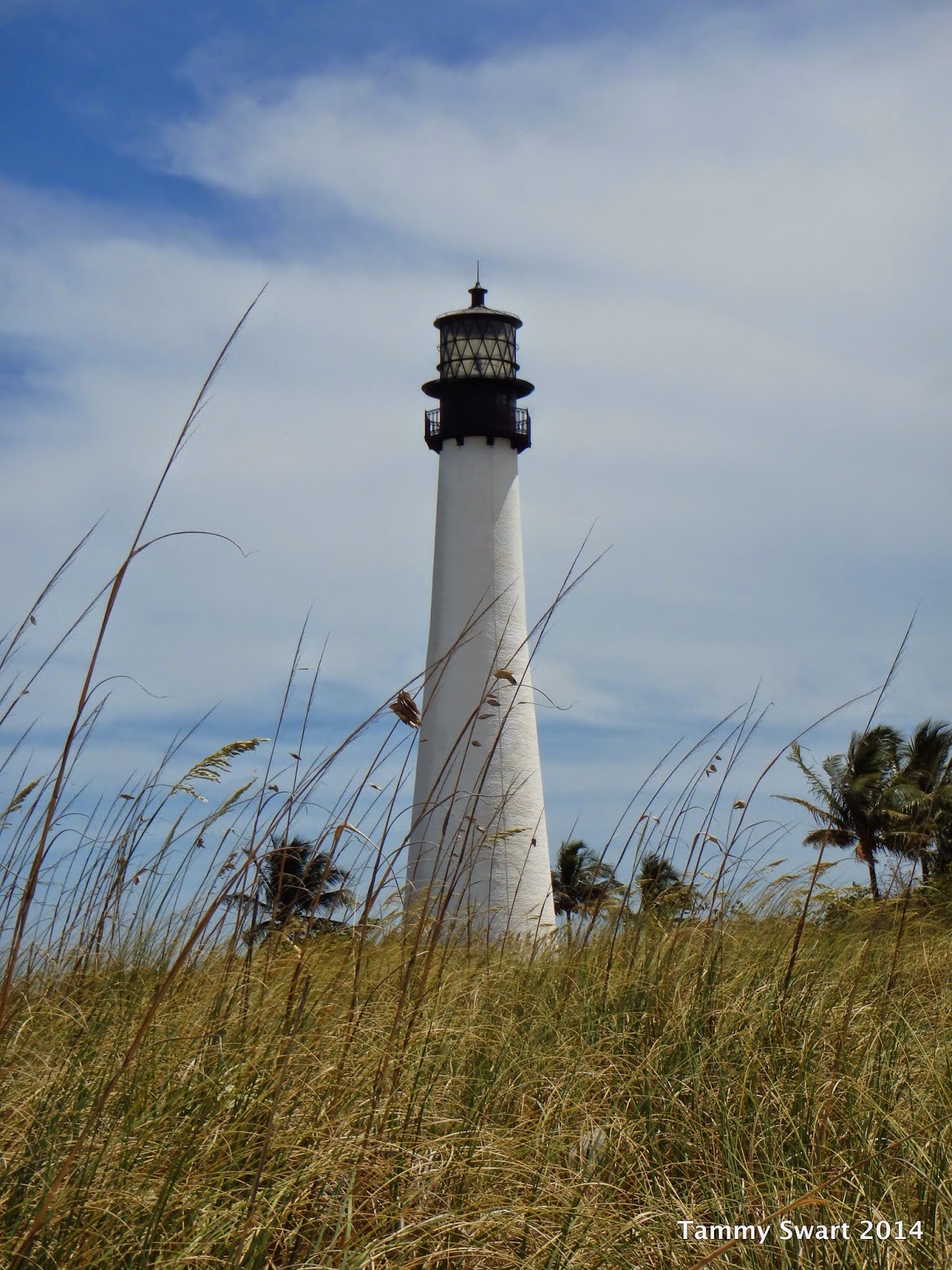 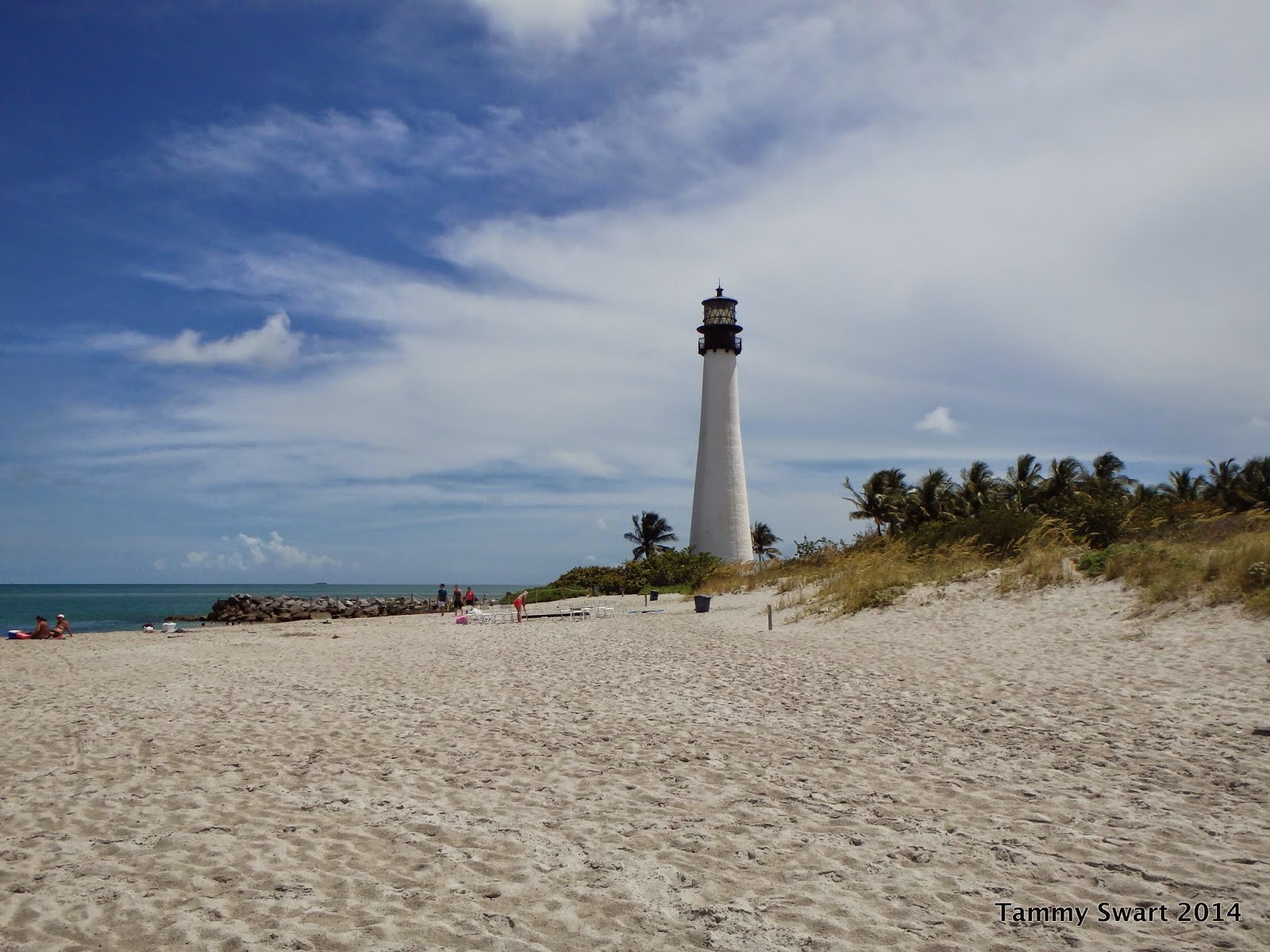 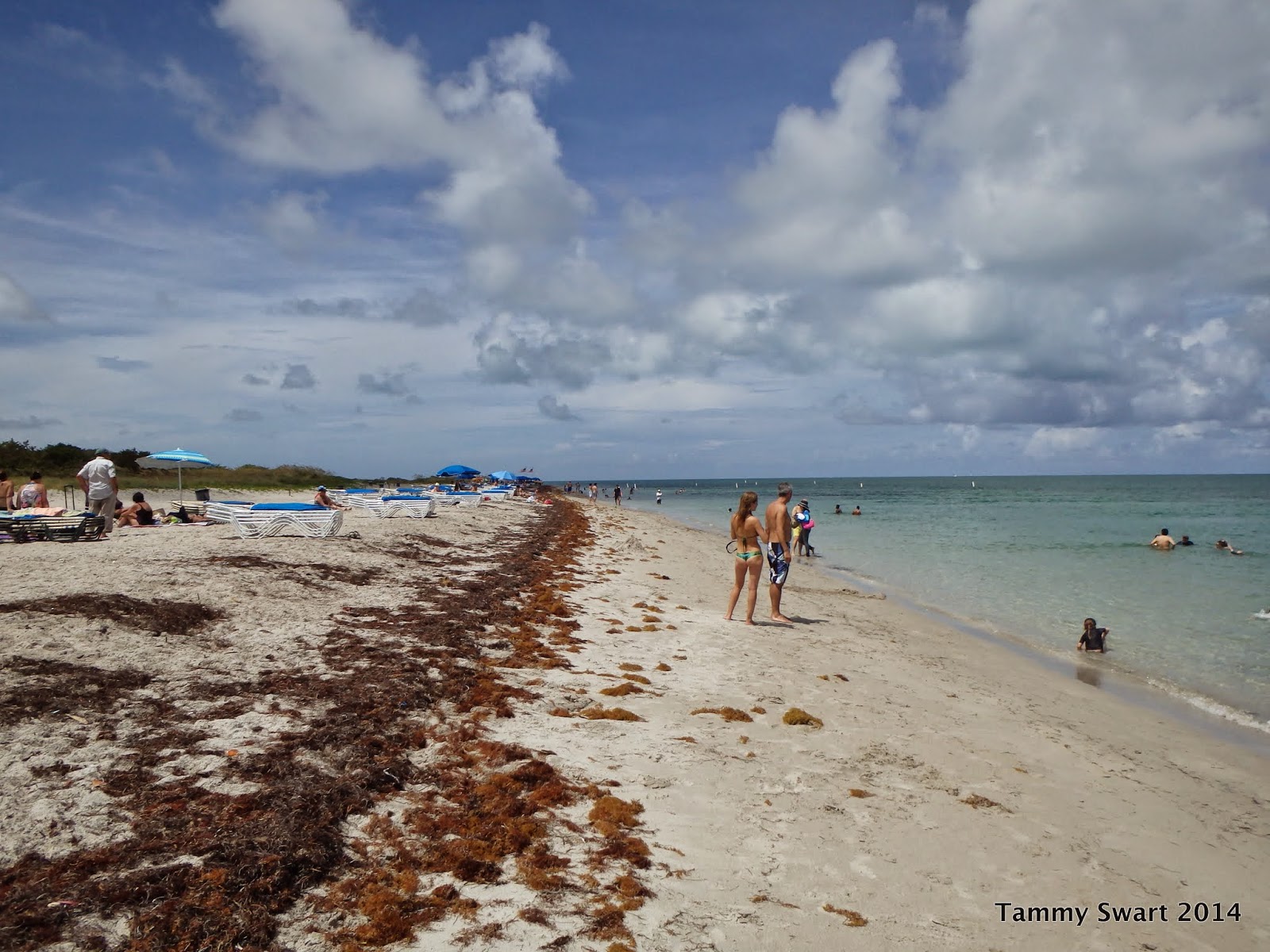 We were both drawn to the refreshing water and glad that we had worn our swimsuits as we peeled off our outerwear and soothed our tired dogs in the cool Atlantic. 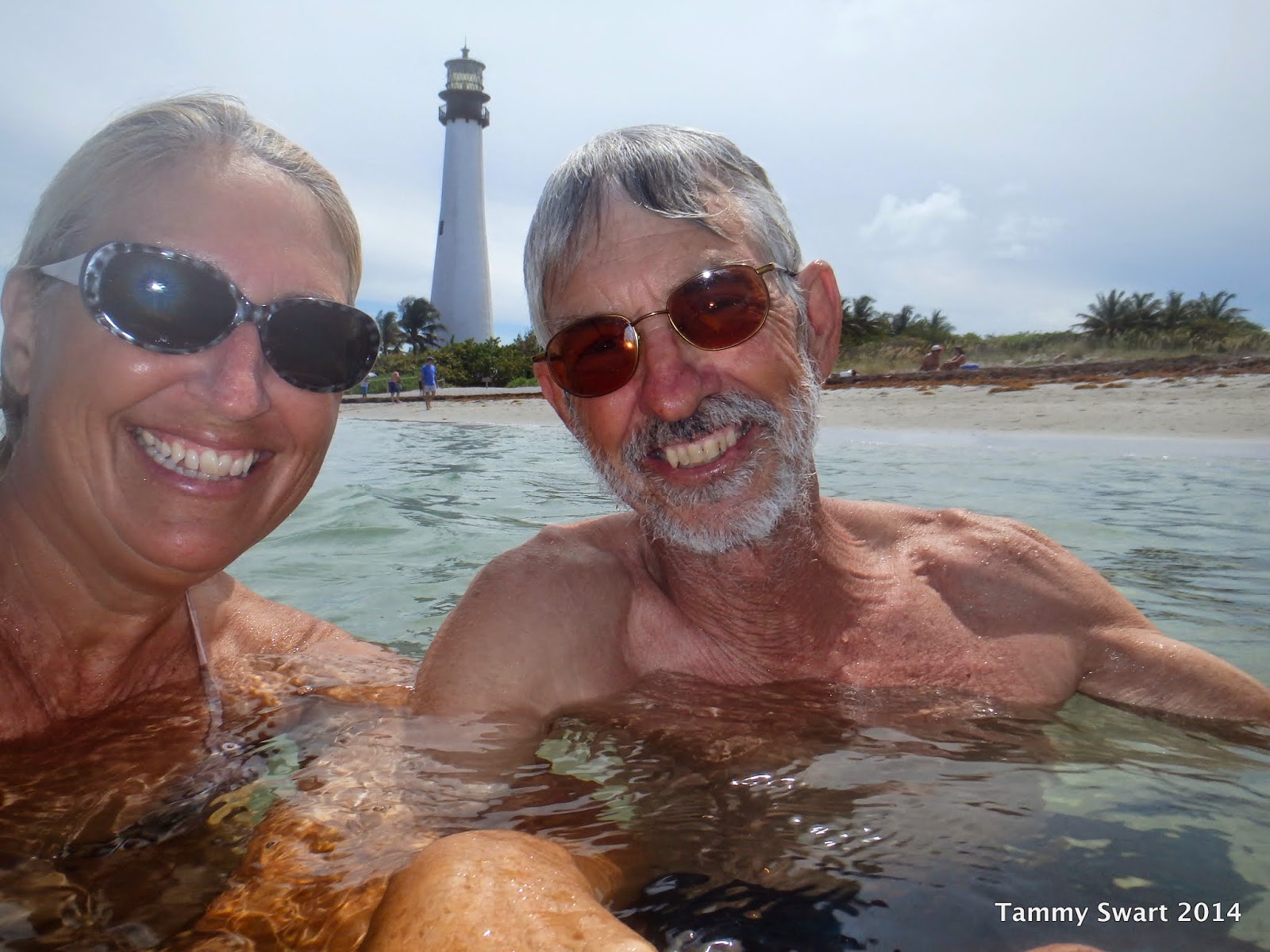 We never tire of discovering the differences in the many beaches we’ve visited.  Not all beaches are created equal and I would say that this is one of the better ones so far.  The threatening clouds convinced us to get a move on so we left the waters and made the trek back to the harbor.

We stopped at the Boater’s Grill to see if we could score some ice.  YES!  We took our ice and turned our sights towards finding water.  We made a quick pass at the pavilion where we hoped to find a water faucet.  We were disappointed to find none and believe me… I LOOKED!  Suddenly our day acquired a slightly sour twinge. 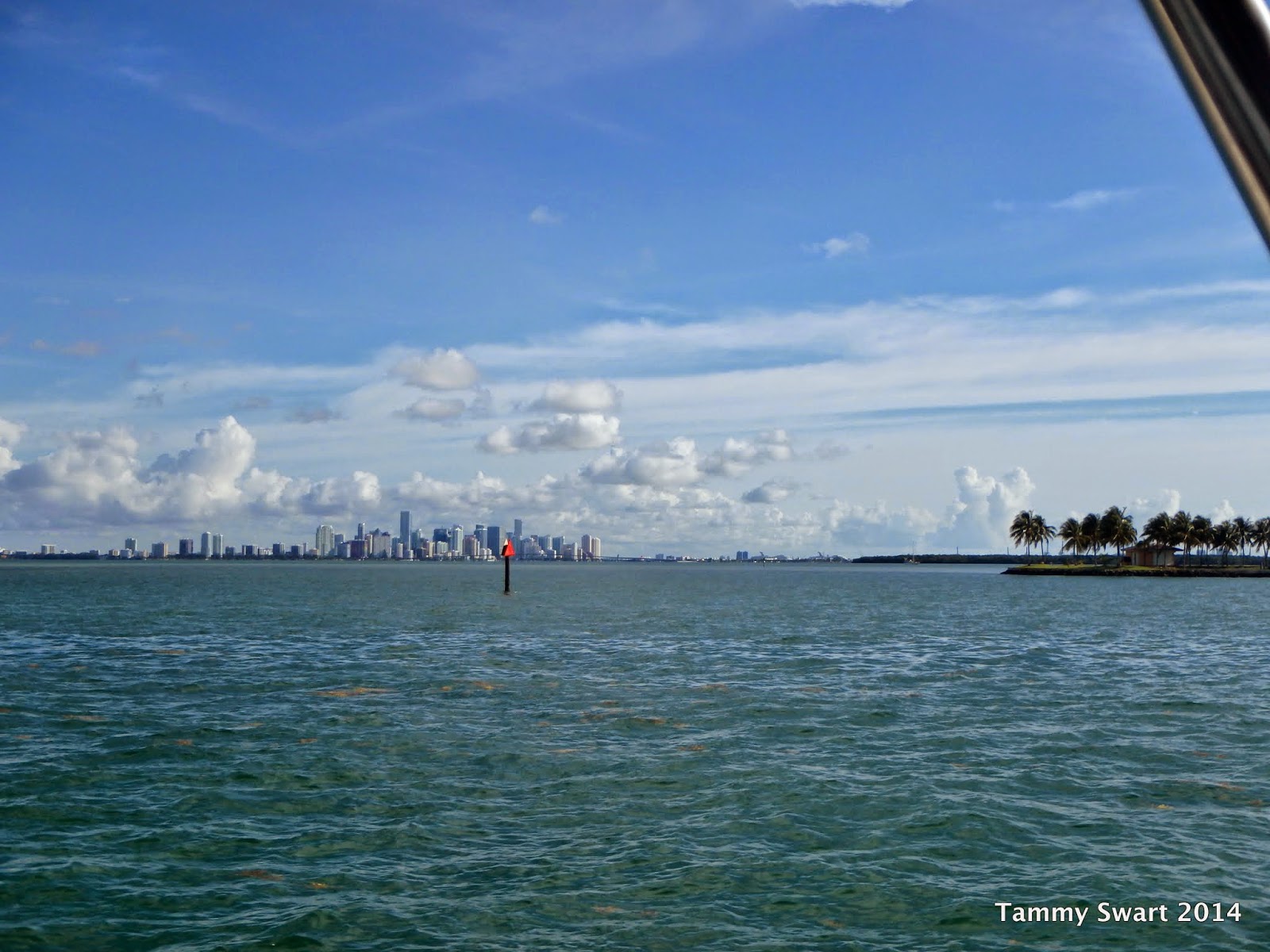 I’m trying not to hold it against the place.  I’m sure that there was someone who abused the offering of water that prompted the Park to shut it down… but for $20 you would think they could find a way to work that out…  We really did enjoy our brief time here.  I don’t think I would want to spend two weeks here as our friends did… but it’s surely worth a stopover, but had we not already put our money in the box, we probably would have moved on to a free anchorage with a little more breeze after visiting the park.

We spent a somewhat warm night in this well protected anchorage and were chased out in the morning by voracious hordes of no-see-ems.  We turned our bow towards Miami where we would take the Government Cut to the Atlantic and beyond.  Ft. Lauderdale… Here We Come!