A Day OF Dragons and Pigs

We are more lucky than many of the folks still here in Marathon as we had a weekend escape a while back.  Without that, we would be closing in on two whole months spent here in Marathon. Now I’m not saying that it has been bad here by any means… but we’re MORE than ready to be gone!

But… enough is enough!  We are leaving this place come Monday NO MATTER WHAT!  But not without a goodbye…

The season has pretty much wound down here in the harbor, most of the events that normally happen here during the “high season” have dwindled to a trickle.  But there was a last little flurry of activity today that we would have been foolish to miss!  The first of two events being Dragon Boat Races on Sombrero Beach!

I had no concept of what this might entail when we collected Sally from Encore to ride with us to the beach.  We approached the normally empty dinghy beach to find it full of people and boats.  WOW this thing is bigger than I thought!

We beached the dink and took a look around.  There were tents set up in the park where the teams congregated in preparation for their turn on the boats.  There were people here from as far as North Carolina to participate in this event.  Evidently it’s a “thing” although I’ve never heard of it before.

We walked out to the beach where the winds, blowing 25-30 knots in the harbor, were not evident here on the South side of the Key.  We had no idea when we donned our foulies for this little trip, that we would be in bright sunshine and balmy breezes with front row seats to watch the boats race. We would have missed the race had we blinked twice… it went THAT fast.  The boats lined up at the far left side of the little beach cove and suddenly they were OFF.  The teams digging deep as the pace keepers beat on their drums. There were three teams in this race, which wasn’t the first, and the winner took control early on.  It was no contest in the end! 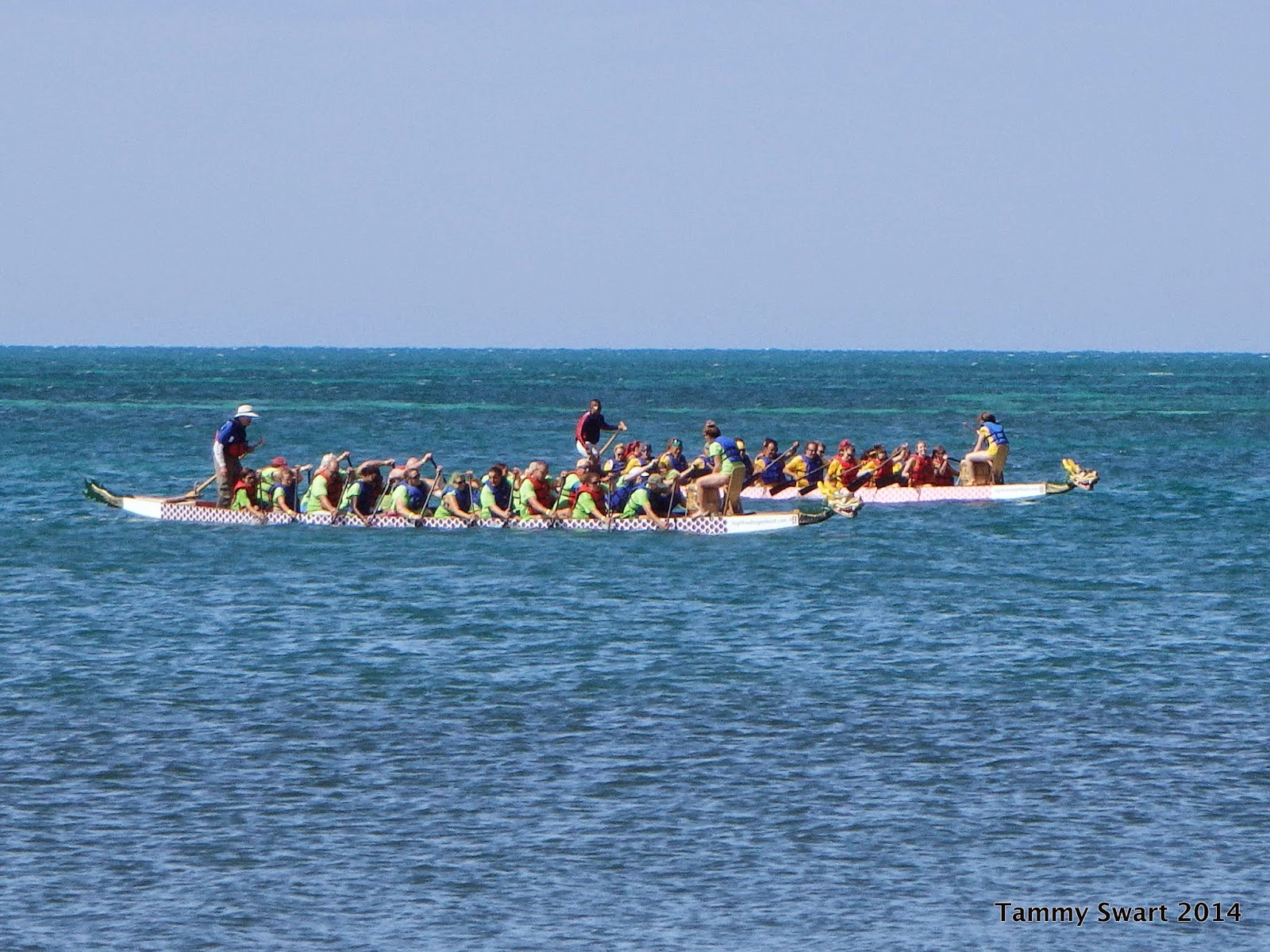 There were chase boats and race committee boats just like in sailboat racing.  It was all very neat and much better than spending (another) day aboard hiding from the winds!

We walked back to the staging area to see the teams come in and disembark. 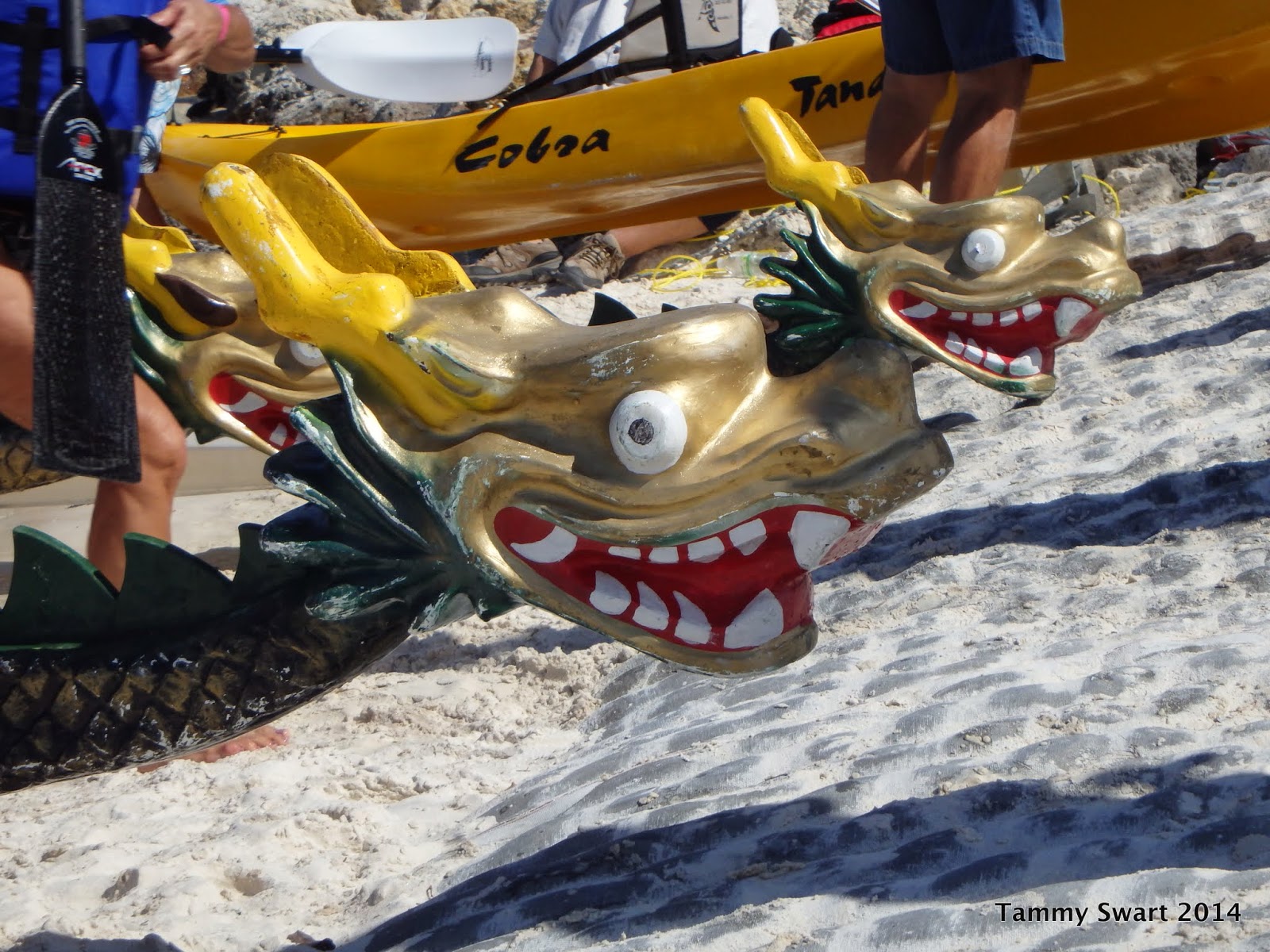 The boats were bailed while the next racers waited in orderly lines and boarded with precision.  This is all managed very efficiently by dozens of volunteers.
We watched as the new batch of racers headed for the course.  We made our way back to the beach for some pictures and I was asked to help shoot video of the race.  This would be the last race before a break and I was happy to help out.  While we watched (and videoed) the race, the woman told us all about what was going on and what it’s like to race these boats. 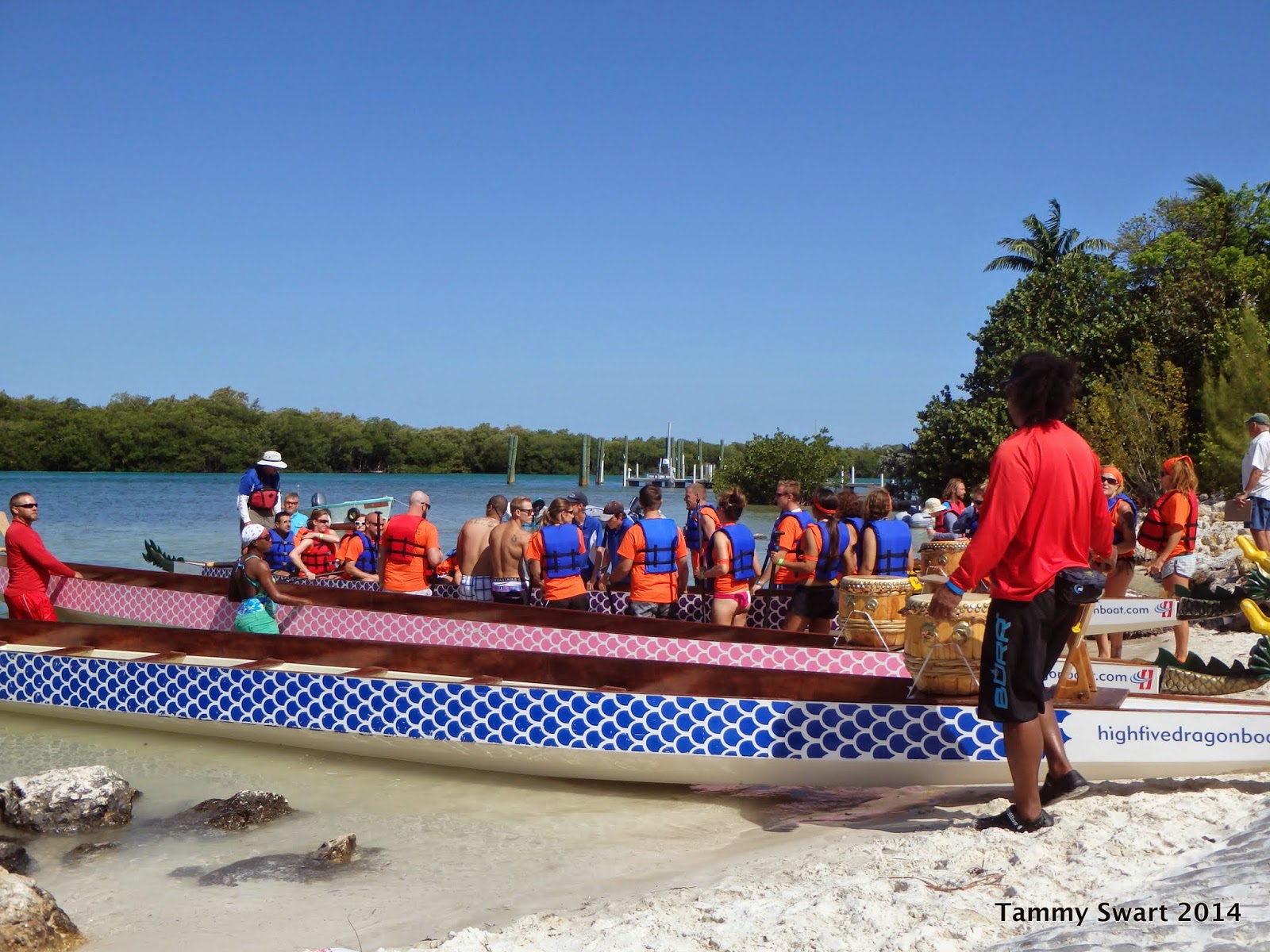 The teams optimally practice together at least a couple of times a week to develop the timing necessary to win a race.  Her team was a “blended team” which means that two halves were put together from people from different towns.  Still, they managed to win this race!  It was fun having our own private commentator at our side.


When this race was over, they took a break before the finals to have a ceremony in support of Breast Cancer Survivors.  One crew was made up entirely of women who have survived breast cancer.  The rowing is beneficial to their development of the muscles post-mastectomy. Makes sense but who knew??? 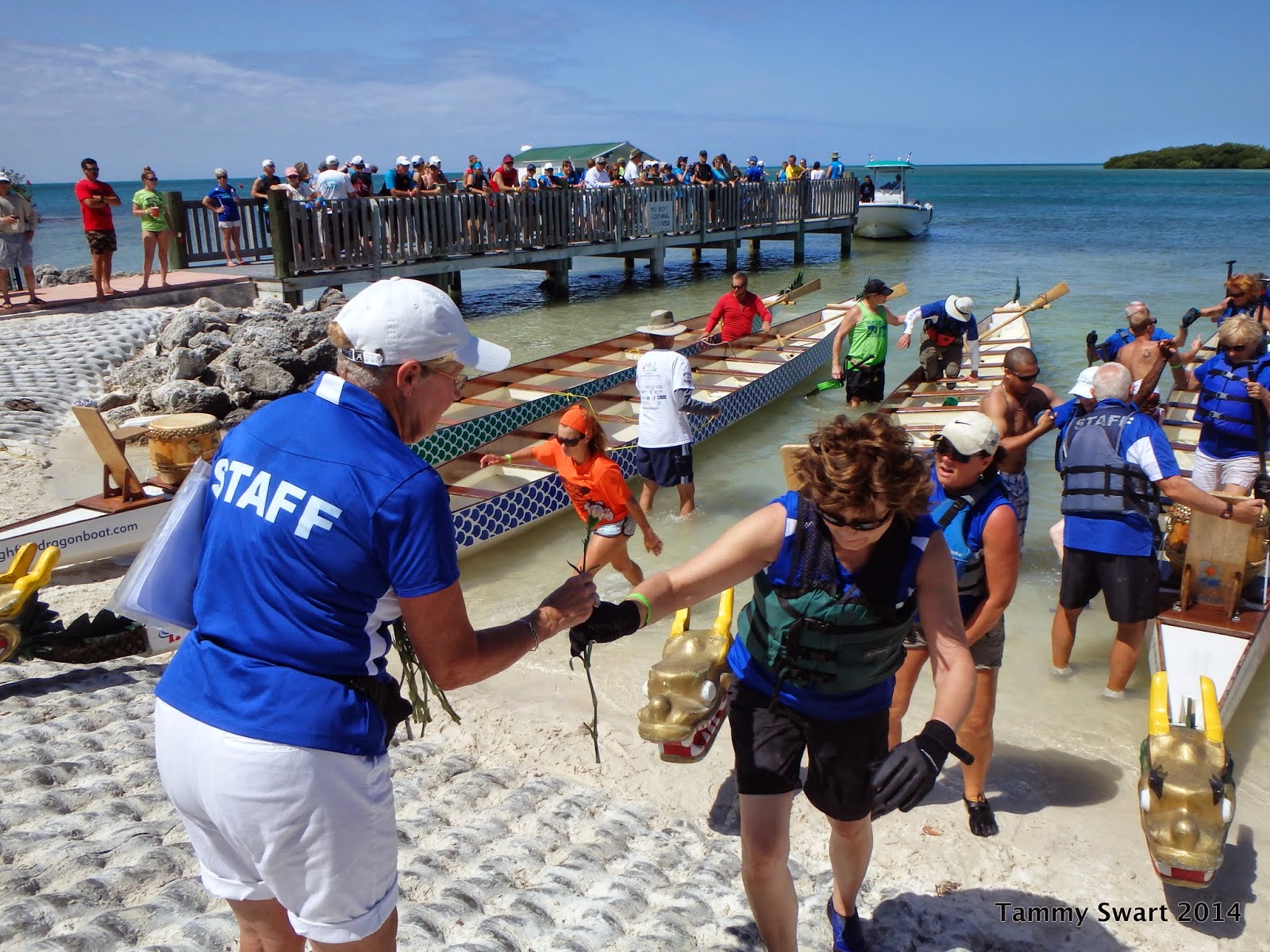 We watched as the boats emptied and everyone made their way with carnations in hand, to the dock where the presentation was held.  After a short speech, the racers all tossed their carnations into the water to watch them float away. 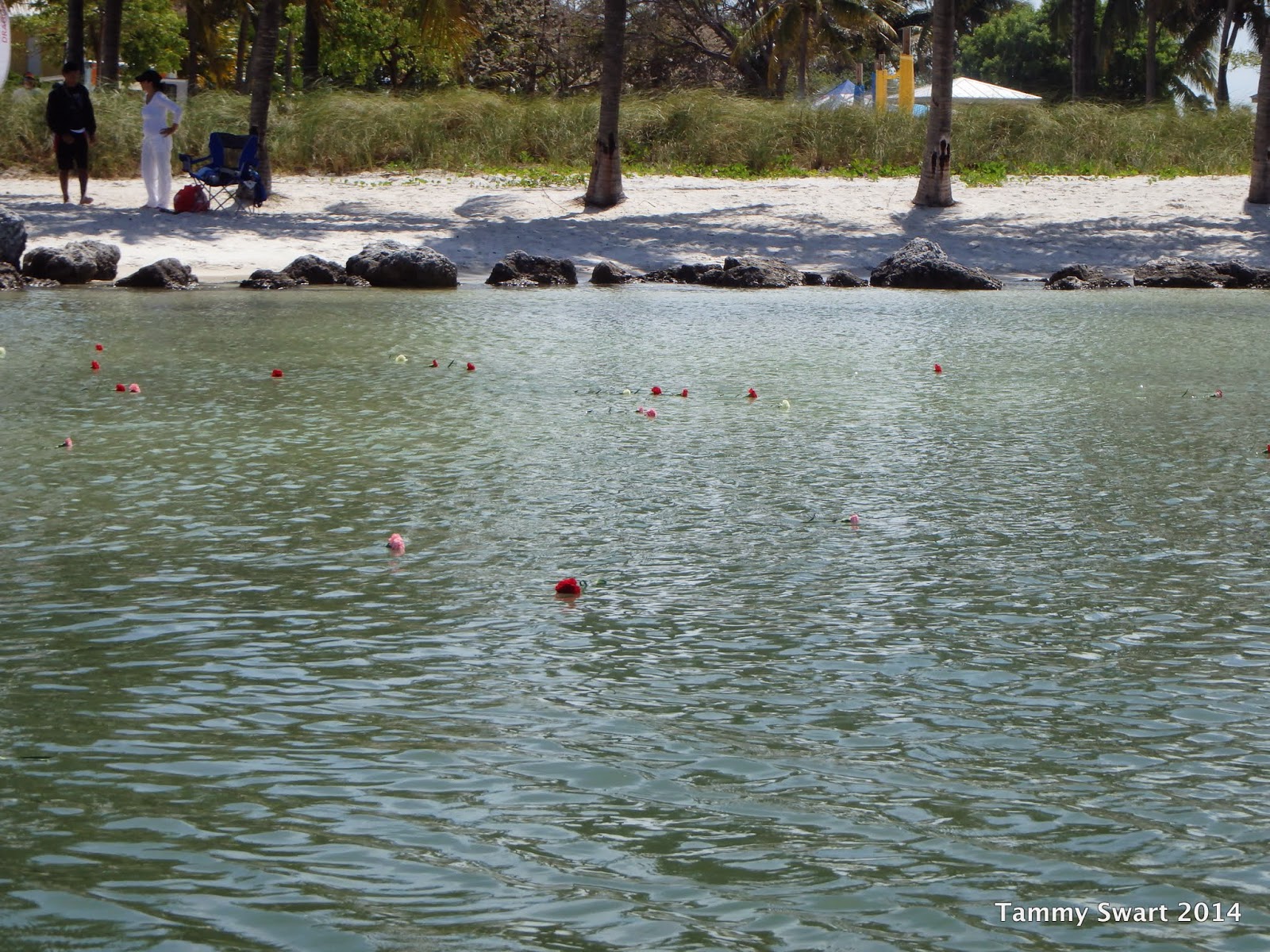 We enjoyed all of this from our dinghy then went around to get a better look at all of the flowers on the water.  It was very nice.  There was more racing to be seen but we had things to do back at the boat so we headed home.  Again the ride was not as wet as we expected, so there’s hope for our escape yet!

After a short nap, we gathered ourselves up once again to brave the high seas of the harbor and headed ashore.  Ted, a long-time resident of the harbor (who here ISN’T considering themselves a long-time resident at this point?) was having a going-away party, complete with an entire roasted pig!  I see this as a SIGN that we are, in fact… going AWAY! 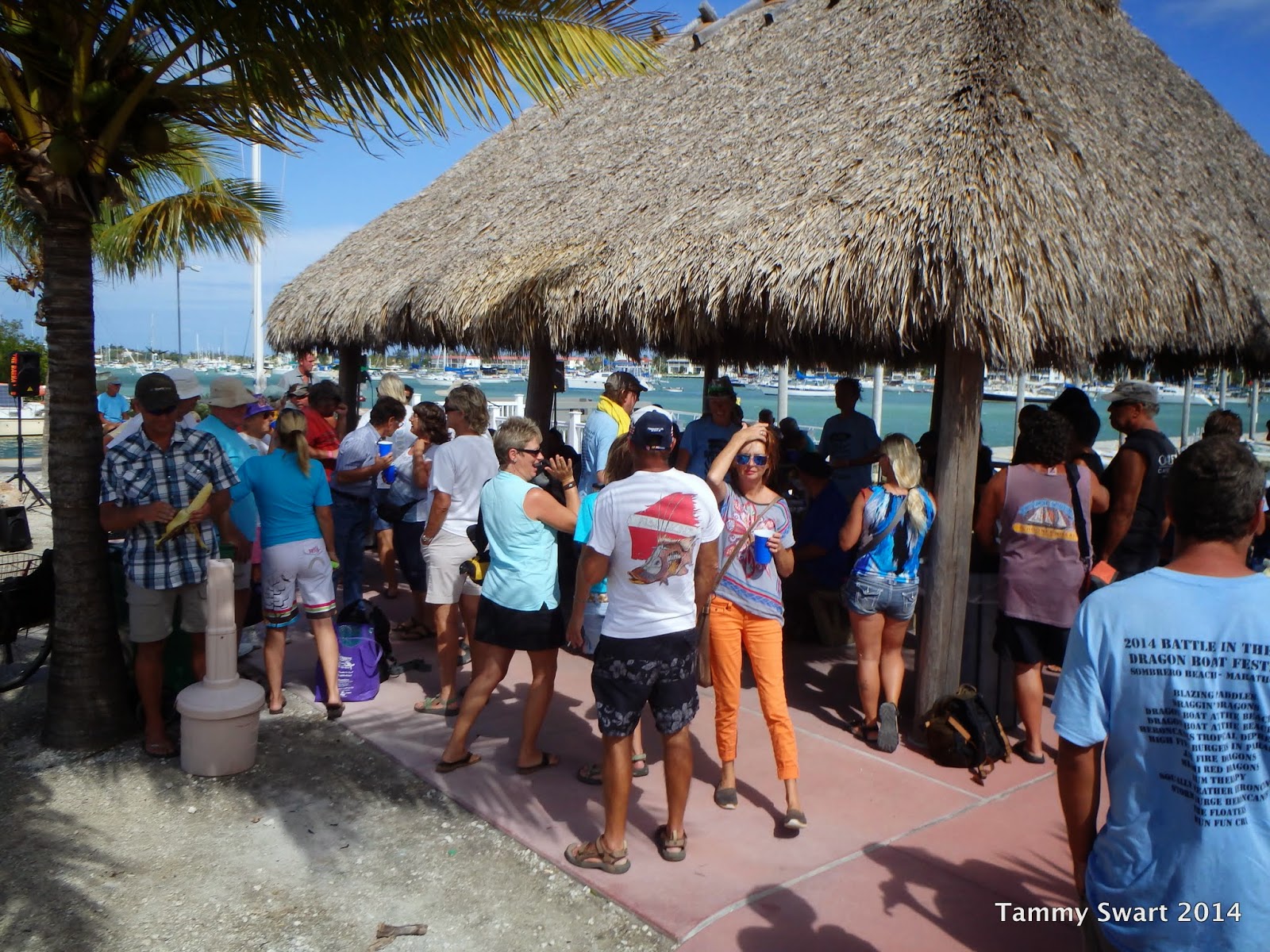 We joined fellow cruisers and friends while the Tiki filled up and spilled over. 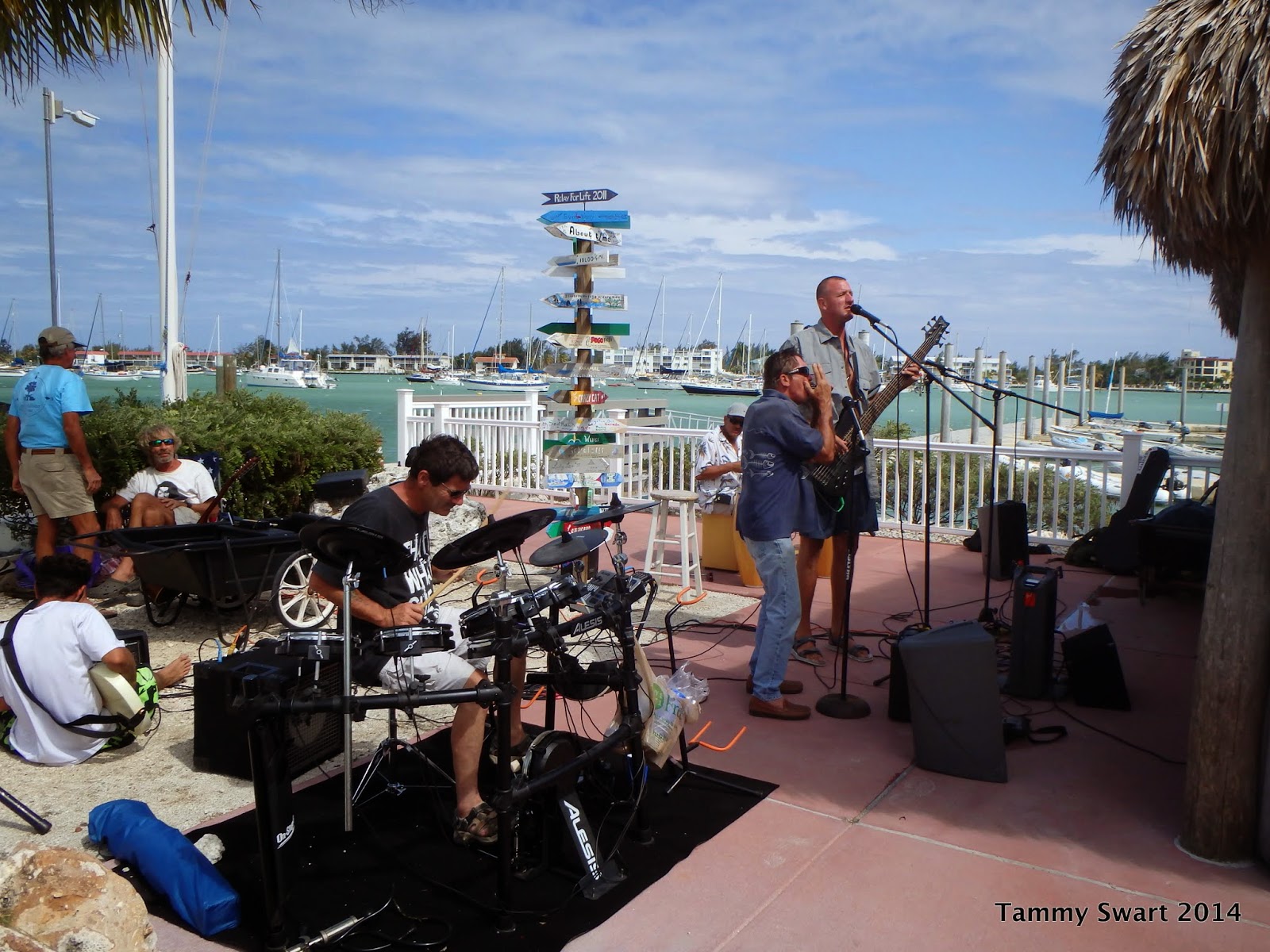 We were entertained by local musicians as they passed the mic from one to another without skipping a beat.  We laughed and shared plans with others who have been trapped here, some longer than US!!! 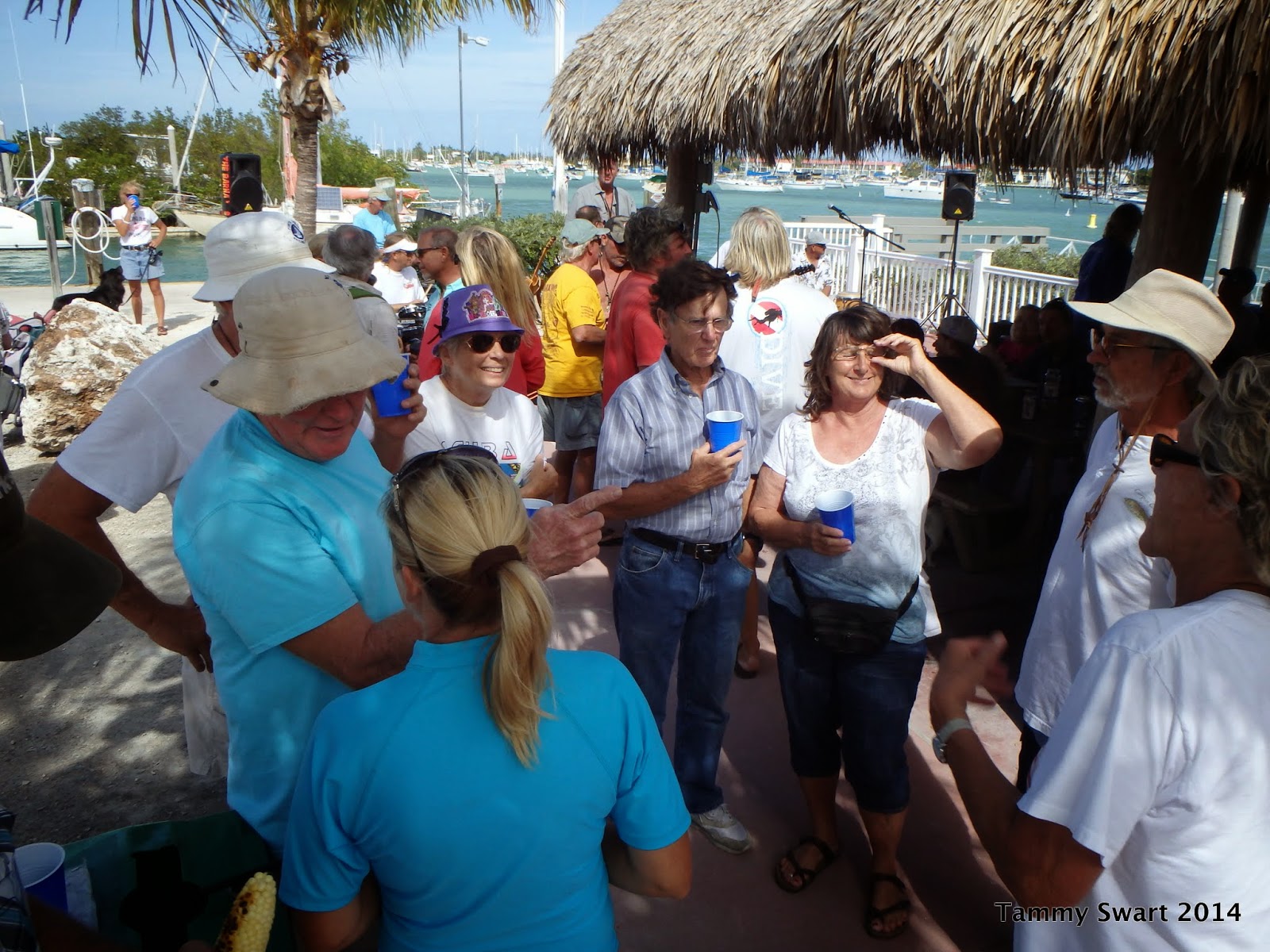 Everyone was in good spirits and there were some raised glasses and raised eyebrows as we announced unequivocally that we are OUTTA HERE come Monday!  Wind-schmind!  We are leaving! 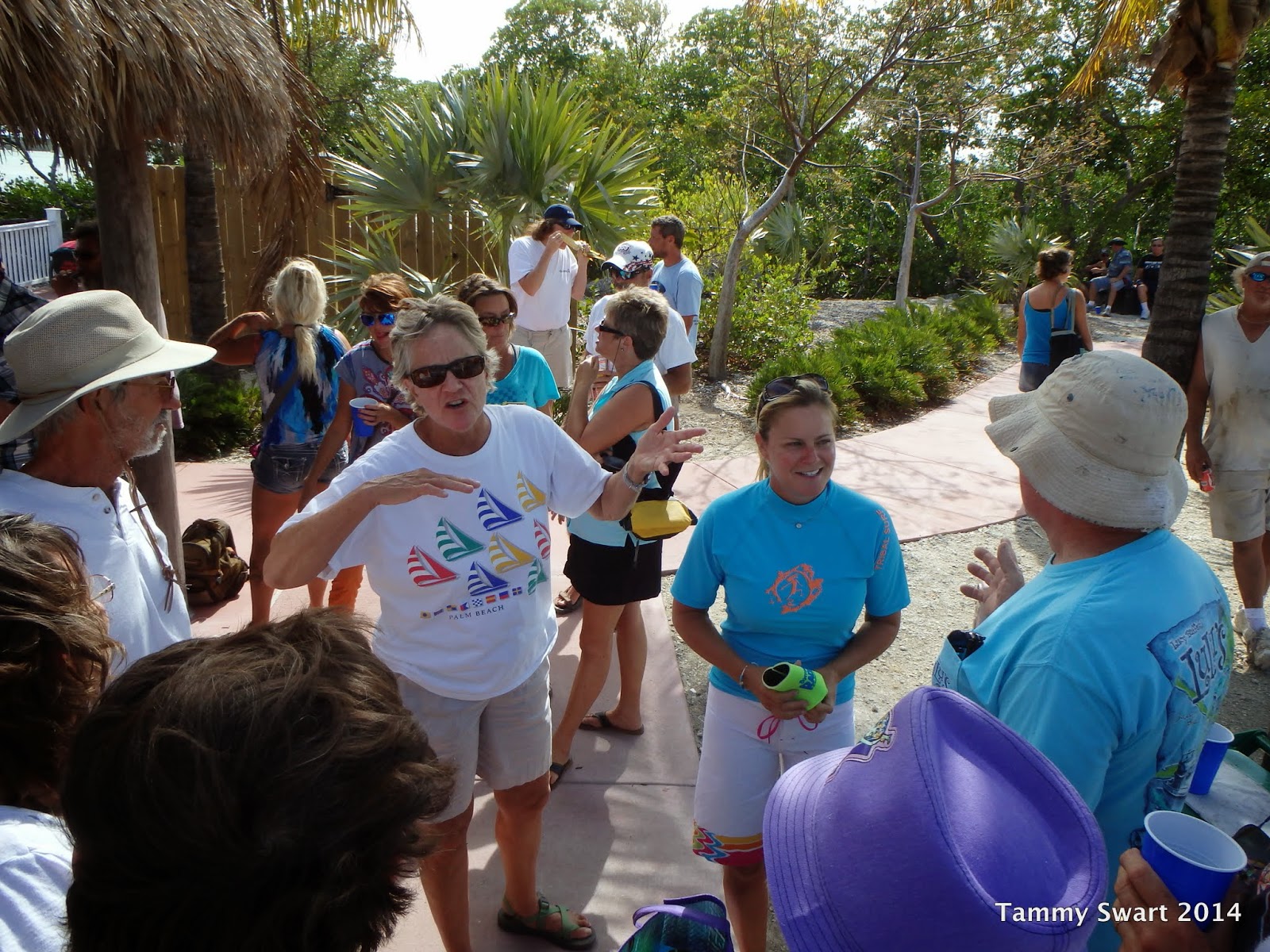 Finally the aforementioned pig was done with roasting and was unveiled for our eyes… Ok, kind of macabre looking, but in the interests of being adventurous on the eve of our continued Adventure… I patiently waited in line with my thin paper plate to get my share. 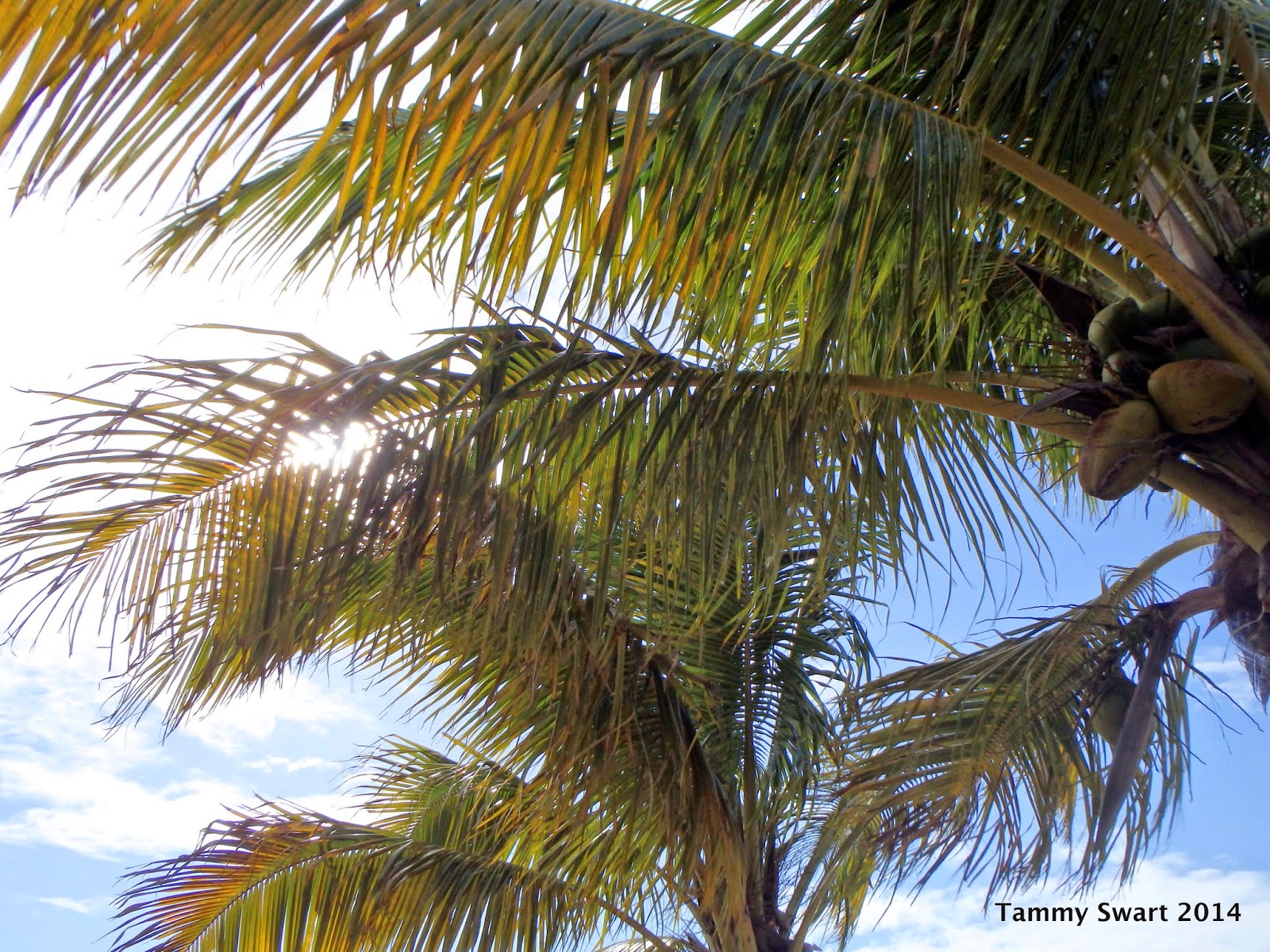 The winds continued to blow as many enjoyed portions of savory and garlicky pork body.  The poor piggy didn’t fare so well…  We had our fill and one by one, couples took leave to hit the showers and return to their respective boats.  A BIG THANKS to Ted for the fabulous send-off!

With the increase in cloud cover the winds had come down a little bit, I swear!  We are crossing our fingers as we persist in making our plans to leave on Monday.  We are READY and we are MORE than WILLING to brave a little bit of wind to be on our way again.

BUT… we’ve learned our lesson.  No longer will we announce our intended destination.  The wind gods have a wicked sense of humor and delight in foiling our made plans…  So where are we headed?  We aren’t saying!