My husband has lied to me.  He told me that when we left Corpus Christi, we would not see winds like those that blow in CC anywhere else we travel.  I had been counting on that!  But perhaps we’ve brought the winds with us to Florida… because it seems that ever since we reached the Keys, we’ve had a LOT of wind!  Just like home!

But today we finally got a break.  The winds were light.  We worked all day yesterday changing oil in the engine and generator… and today… we will play!  There are mangroves lining Boot Key Harbor that look like the perfect place to go kayak fishing.  Bruce brought his fishing pole ( I have no license so I can’t fish) and we took off towards Boot Key to try our luck.

When we checked into Marathon Marina, we were given a map of the wonderful kayak trails that wind their way through the actual Key named Boot which is just a few paddles away from our mooring ball.  I’m pretty sure it was intended to get us to RENT kayaks but we’ve got our own, and it has had woefully little use.  We packed lightly, fishing gear, one dry bag with the phone (so that we could find our way out should we become lost), drinking water and the map.

We headed for Sister Creek with one or two fishing stops… caught no fish.  We did see some action but nothing was biting our lures… typical.  The water was a clear clean green so at least we could look down into the depths and SEE fish lurking in the shade along the water’s edge.

Eventually we gave up on fishing and concentrated on kayaking.  There were a few other kayakers and paddle boarders out on the water, but we really didn’t see much of them.  It was like having the place all to our selves to explore.  We started out on the really easy trail, wide open space with plenty of room.  Then we came to a crossroads and went left.  This took us to a more narrow pathway that narrowed even more as we progressed. 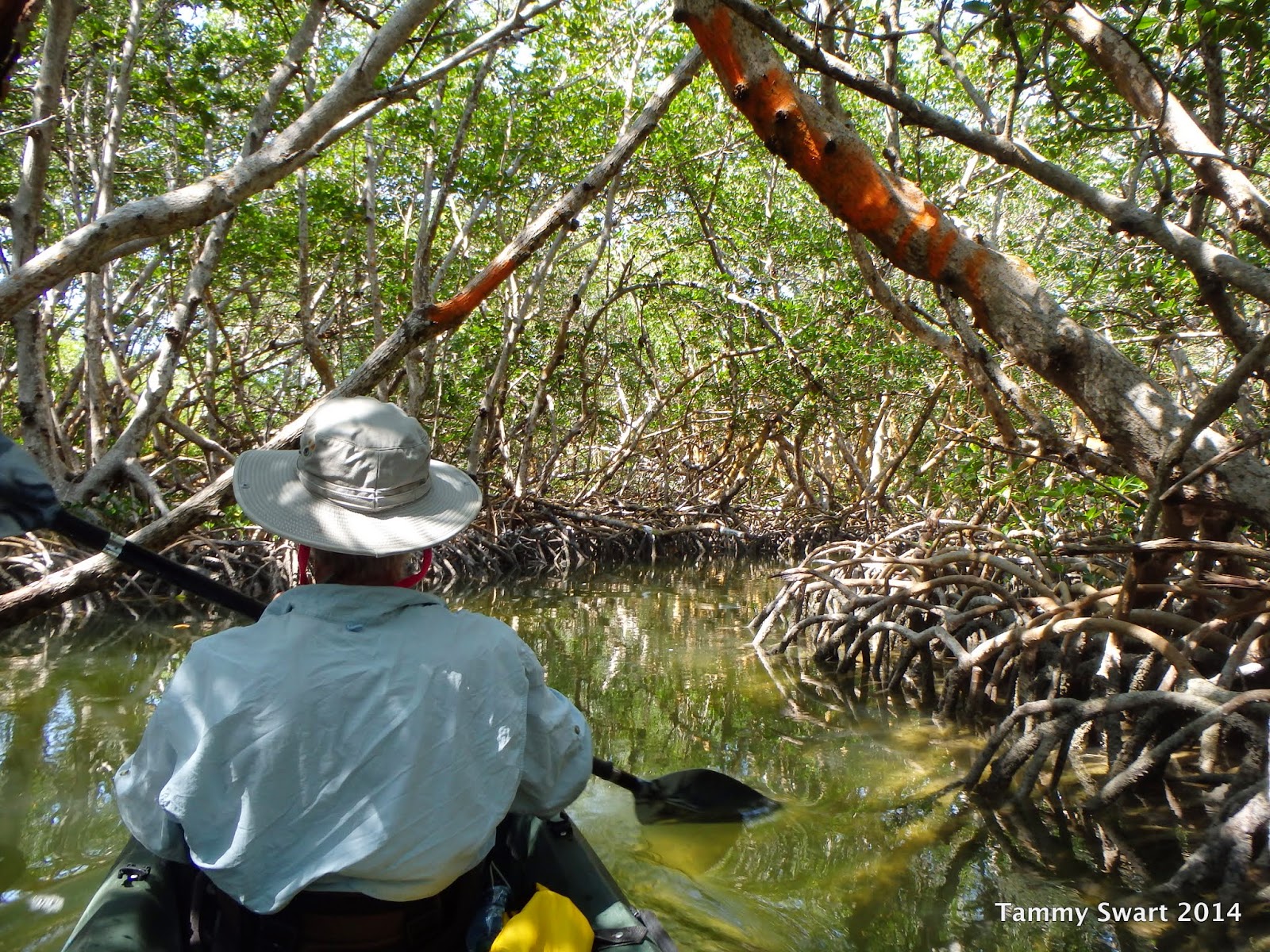 It was quite exhilarating to forge our way through the clutching mangroves like great explorers from another era… er, well maybe not… There were obvious orange painted branches indicating that we were on a designated path, not to mention the fact that someone had come before us and lopped off the branches that dared to be in the way…  but it seemed like exploring to us!


Especially when we realized that we were probably lost.  The lake that was supposed to be in this spot, was not… I got out the cell phone to see our position on Google Earth.  Oops… it thinks we’re at the Publix a few blocks away.  Guess the signal isn’t great here.  What was plan B?  We kept on paddling!

We finally found that lake and enjoyed the quiet of the wide open secret space…  I wouldn’t have called it a lake.  It was about a foot deep but whatever.  We drifted quietly across the sea grass beds and I was able to take pictures of the sea creatures living there.  I think they're upside down jellyfish.  Very cool looking. 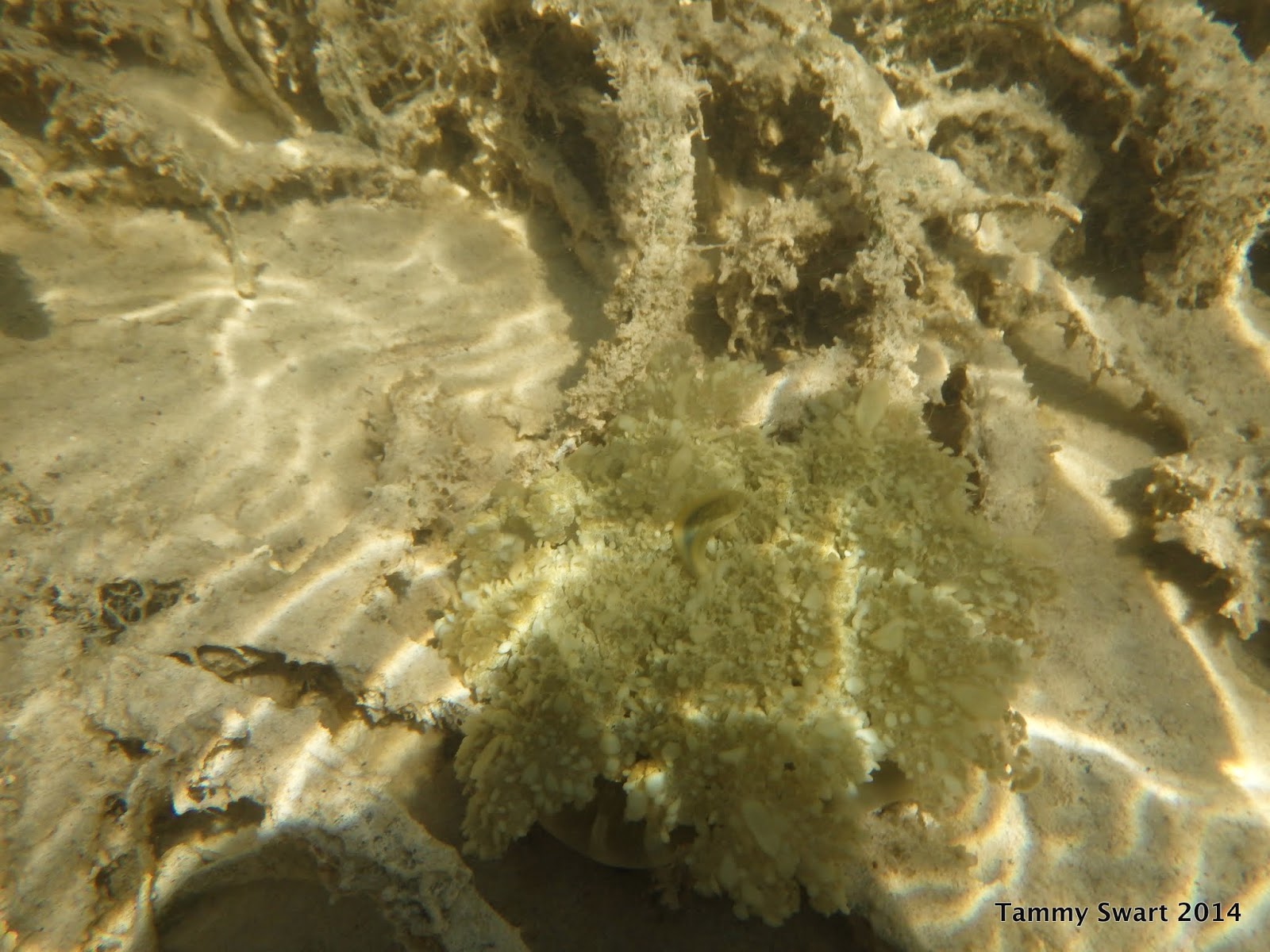 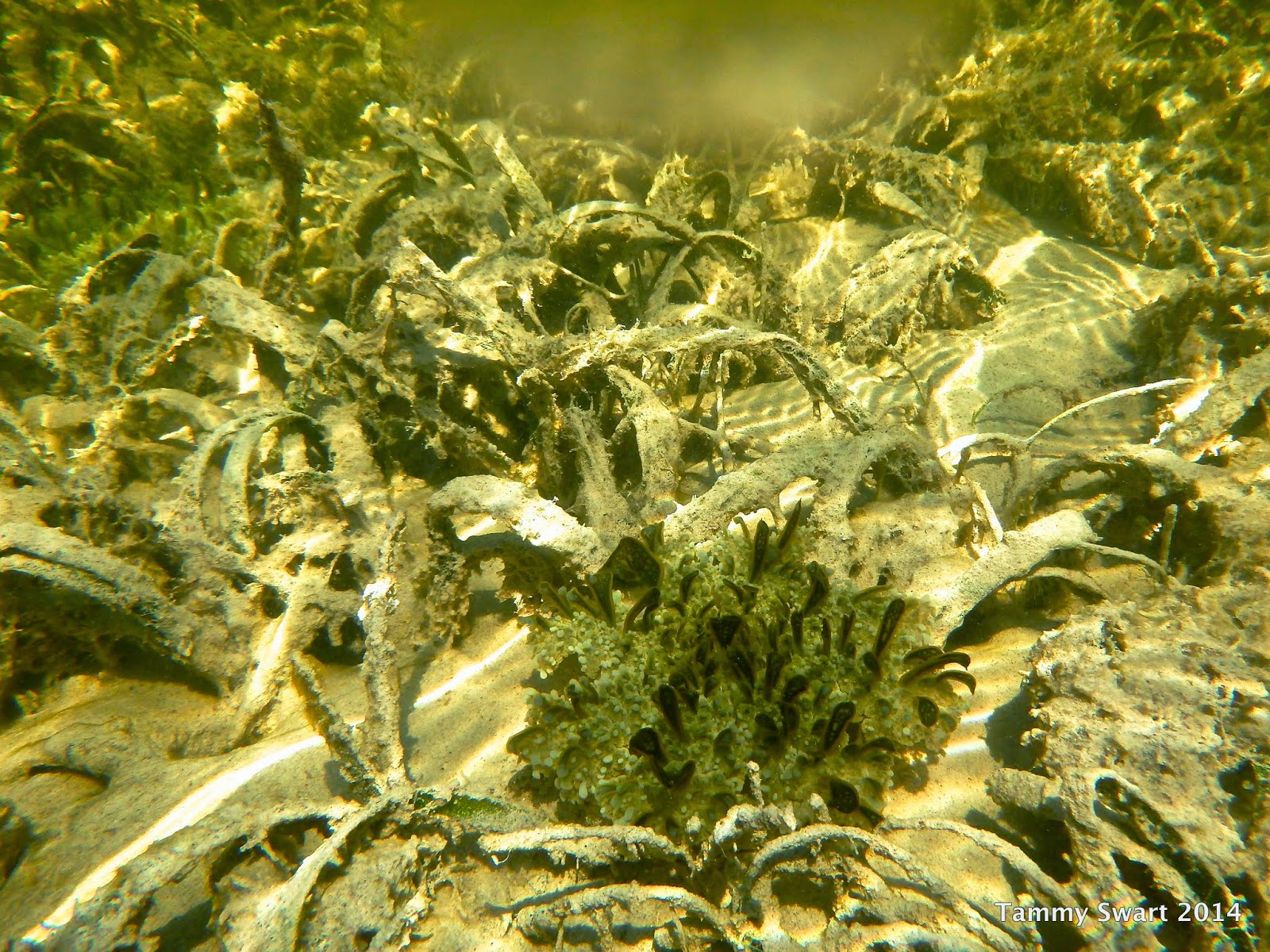 
We entered the dark mangrove canopy into another world.  There were calling birds and silence.  The mangroves grew in a close jumble and the pathway was so narrow we couldn’t use the paddles.


No worries, we easily moved ourselves along by grabbing and pushing off of the limbs.


At one point, I think Bruce was thinking we would never get out.  He insisted that I get the map back out and see if the compass on the iPhone worked.


It did… and we realized as we passed a “gauge” that was on the map, we were not on the trail we thought we were on… again.  But, we were able to devise a plan of escape and confirm the direction we were traveling.

I guess we weren’t as lost as we thought, because it seemed like only minutes until we were back on a trail we had previously seen.  Funny, I would have thought it all looked alike.  But no, we recognized where we were and started paddling like mad until we were out into Sister Creek and headed towards home and freedom… and lunch!


I think the day would have been less fun had we not had that little bit of “out-of-our-comfort-zone”.  It made it less tame, more exciting.  I won’t admit to being lost… but I can highly recommend being almost lost!