A Day In The Life - Medical Care 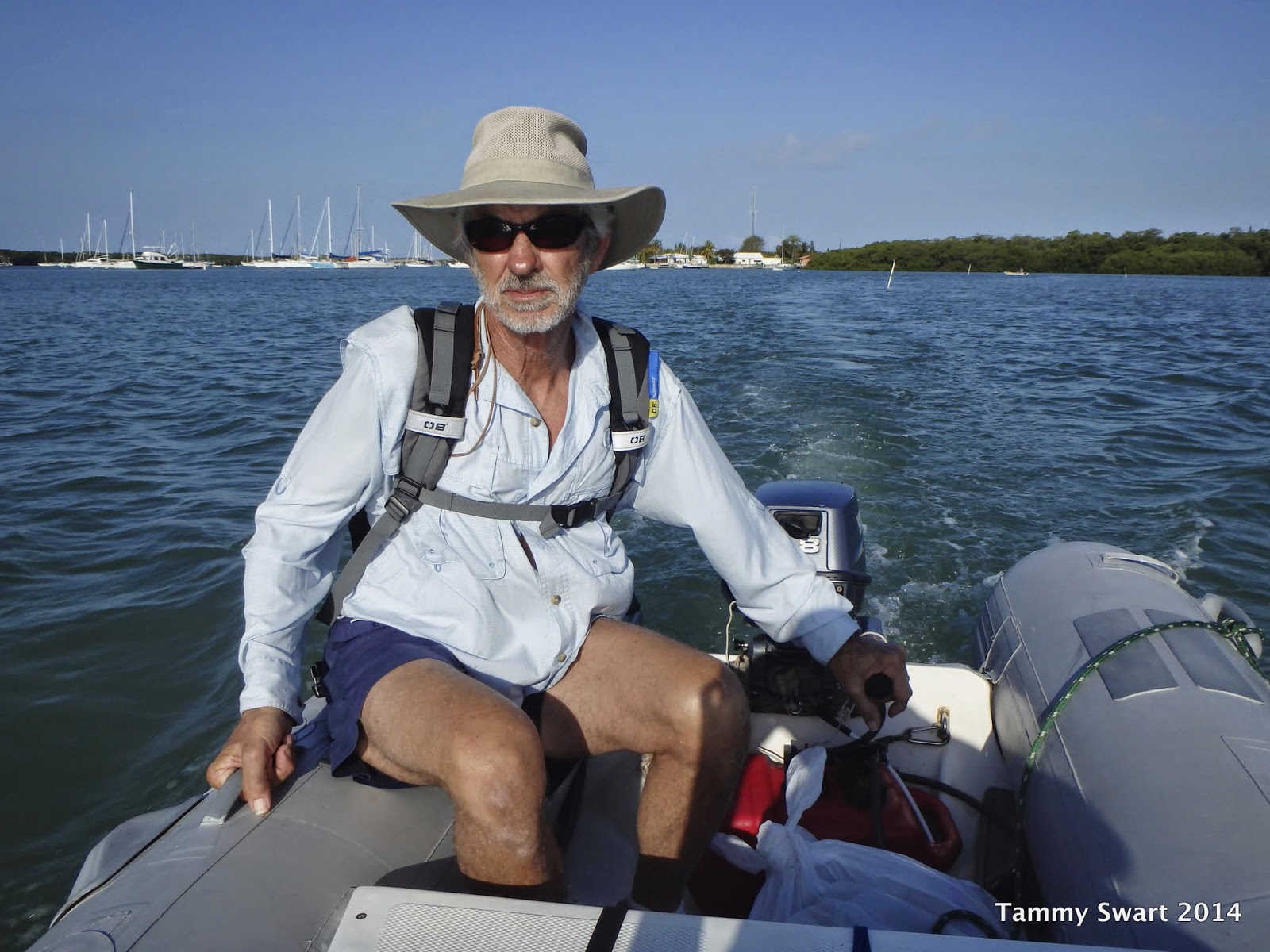 Medical care while Cruising has been an ongoing discussion since we started thinking about Cruising.  No matter where we turn, the choices are not great.  Bruce, being of retirement age already, had to give up lots of extra benefits through his Medicare HMO and go back to Medicare proper so that he would have coverage outside of our home area.  By doing this, he lost vision care, dental care and prescription coverage.  He will still have coverage through Medicare for his physical needs, but his out of pocket expenses will be much higher than they were while he had access to HMO coverage at home.  He still won’t be covered when we leave the country, but that’s a story for another day…

I had been quietly keeping an eye on a couple of spots that had begun to grow on Bruce’s left cheek.  He has spent a lifetime in direct sunlight with little thought given to sun protection in the early years.  He has already had one Squamous Cell Carcinoma removed from his forearm, so I’m nervous about his skin.  Luckily, he is too and usually covers up when we’re out and about.

The aforementioned spot has increased in size to the point that I suggested a visit to the Dr. while we’re here in Marathon.  Bruce went to see Dr. Samess on April 1 and we got the good news that his spot was not cancerous, but he did suggest that, if we had time, Bruce should make an appointment with a local Dermatologist to have some of the many other spots on his arms and legs checked out, and possibly removed.

We felt lucky to be able to get in so quickly, as Dermatologists back home have a six month waiting period for a new patient appointment.  Things seem to be quite a bit more laid back here in the Keys… for which we are grateful. 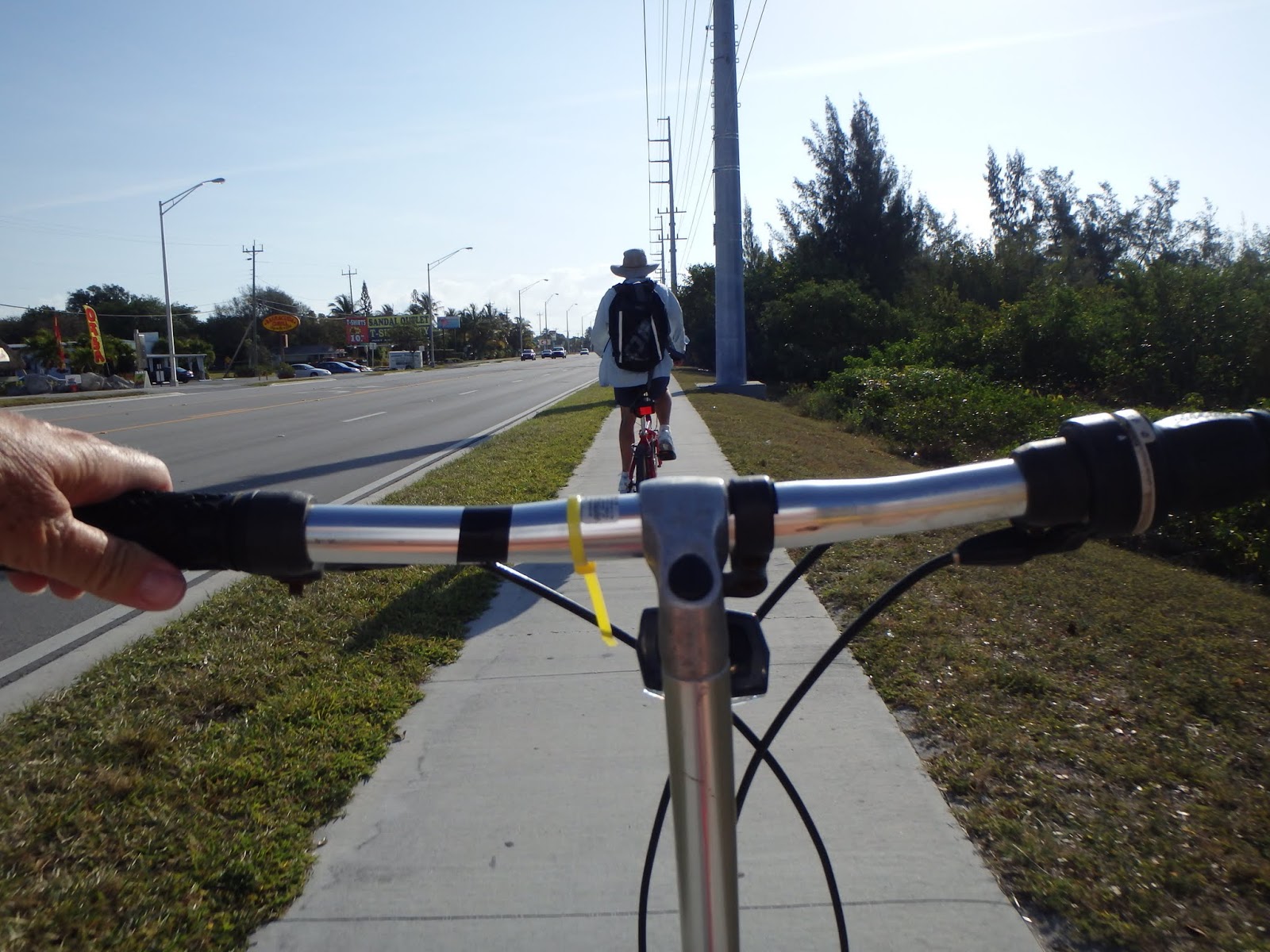 What used to be a simple process BC (Before Cruising) has become a bit more complicated.  We can’t just shower, jump into the car and drive right over to the Dr.’s office like before.  Getting there takes some planning!  Bruce made his call to the office for directions and confirmation of the address.  ( a good thing, since they had moved the office ).  I planned out our route on the iPad, and then we doubled the estimated time it would take us to get there, just to be sure…

We pumped up the dinghy and set off in the mid morning for a 10:15 appointment time.  Our bicycles were waiting on the shore for us and we hopped on and peddled away.  This trip would have us traveling further Northeast along the Key than we had been before.  The businesses along the way seemed to be a bit more upscale than the ones in our area, but still nothing like a big city.

I kept a watchful eye out along the way for lizards.  What?  Yes, lizards.  We had seen an iguana on a prior trip (with no camera) and I was on the lookout.  I was not to be disappointed!  We stopped several times along the way to take pictures.

The only one that we got a really good look at, was unfortunately the victim of a meeting with an automobile… I thought he might be absent since he is the only one that didn’t raise his head and tail and scurry for cover.  Bruce crept up on him and gave him a confirmatory nudge… yep.  A goner! 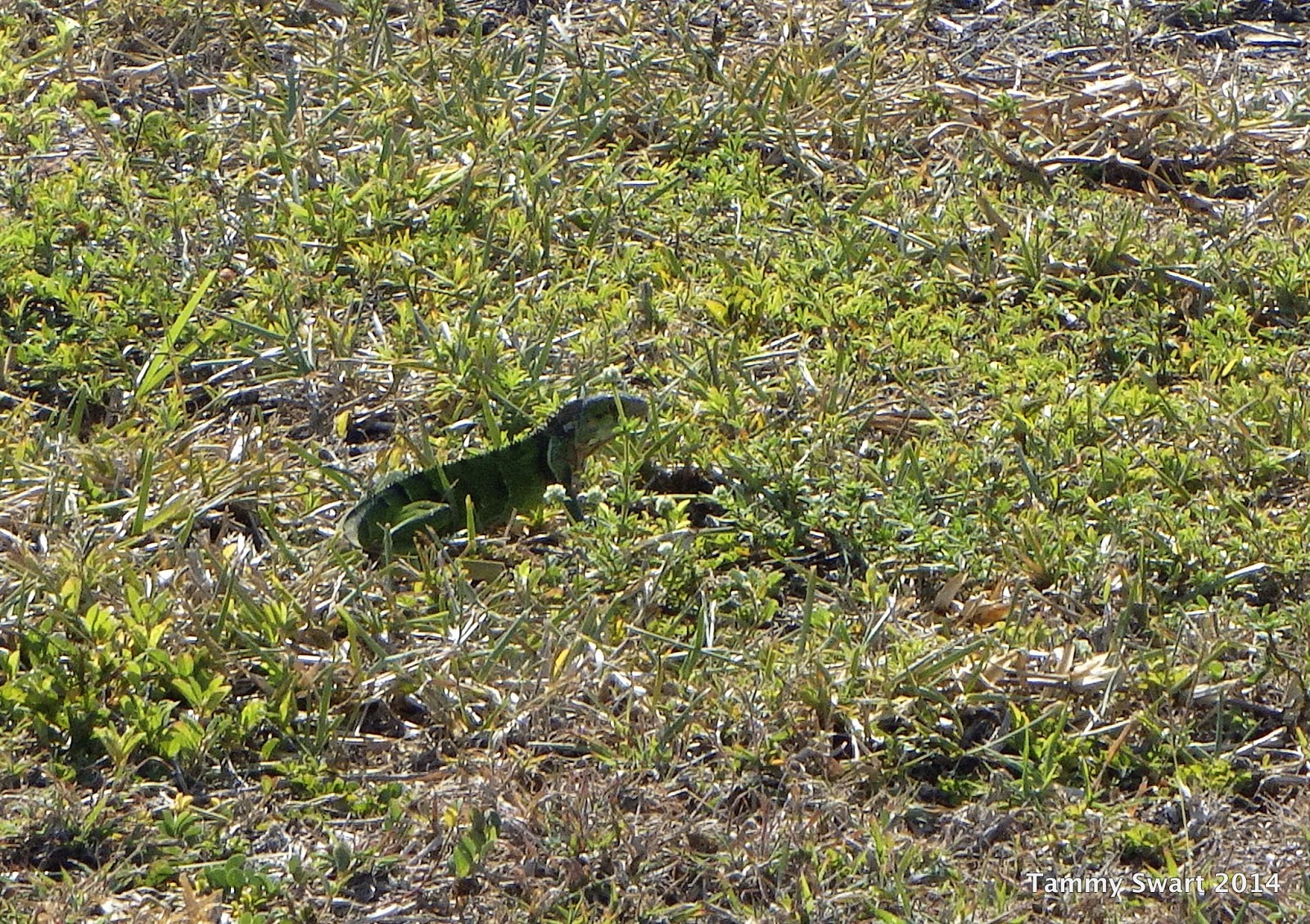 But we found several others that were all too much alive, and they refused to pose for a photo op once I parked the bike, dismounted and walked in their direction.  The smaller guys were a gorgeous and vivid green! 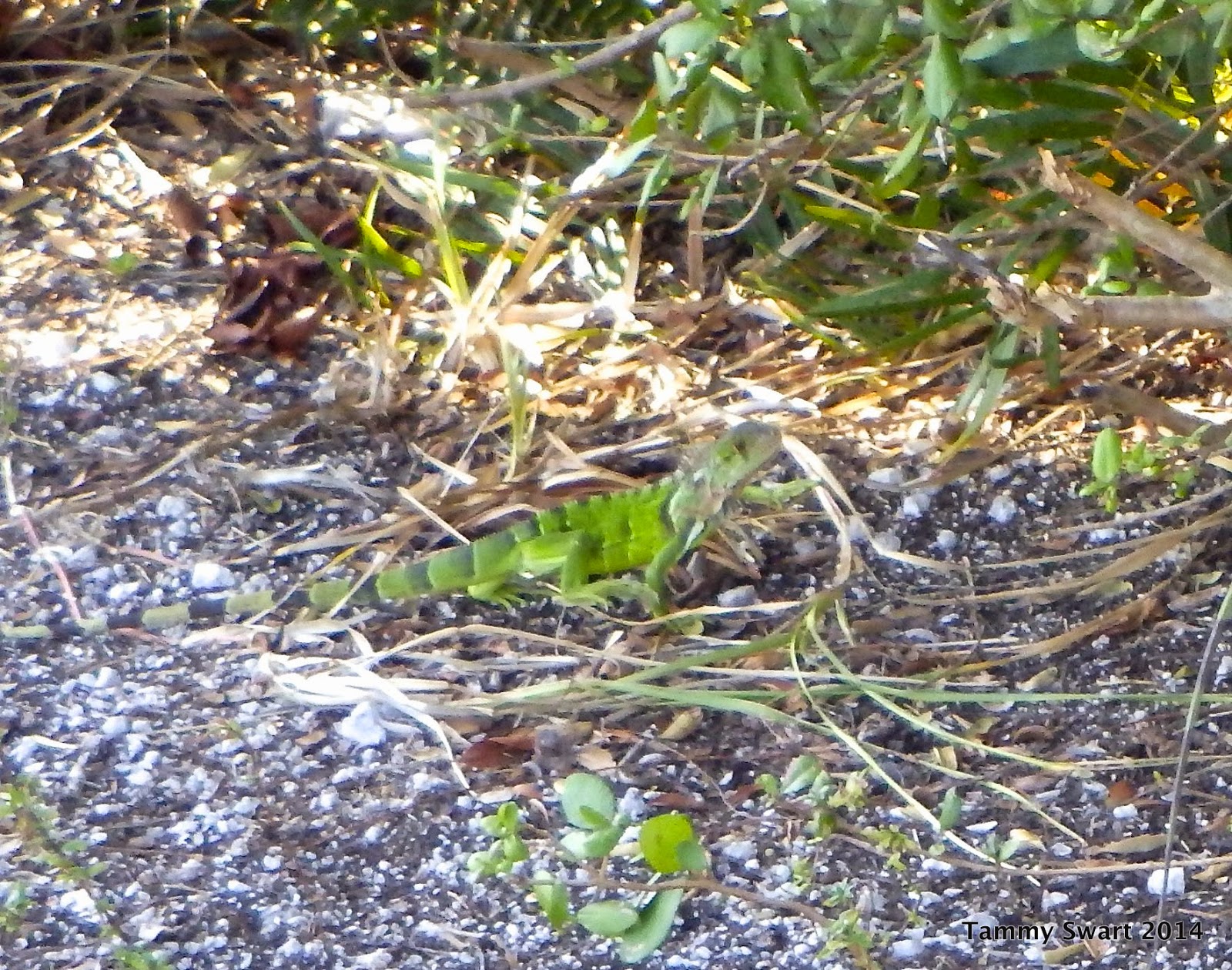 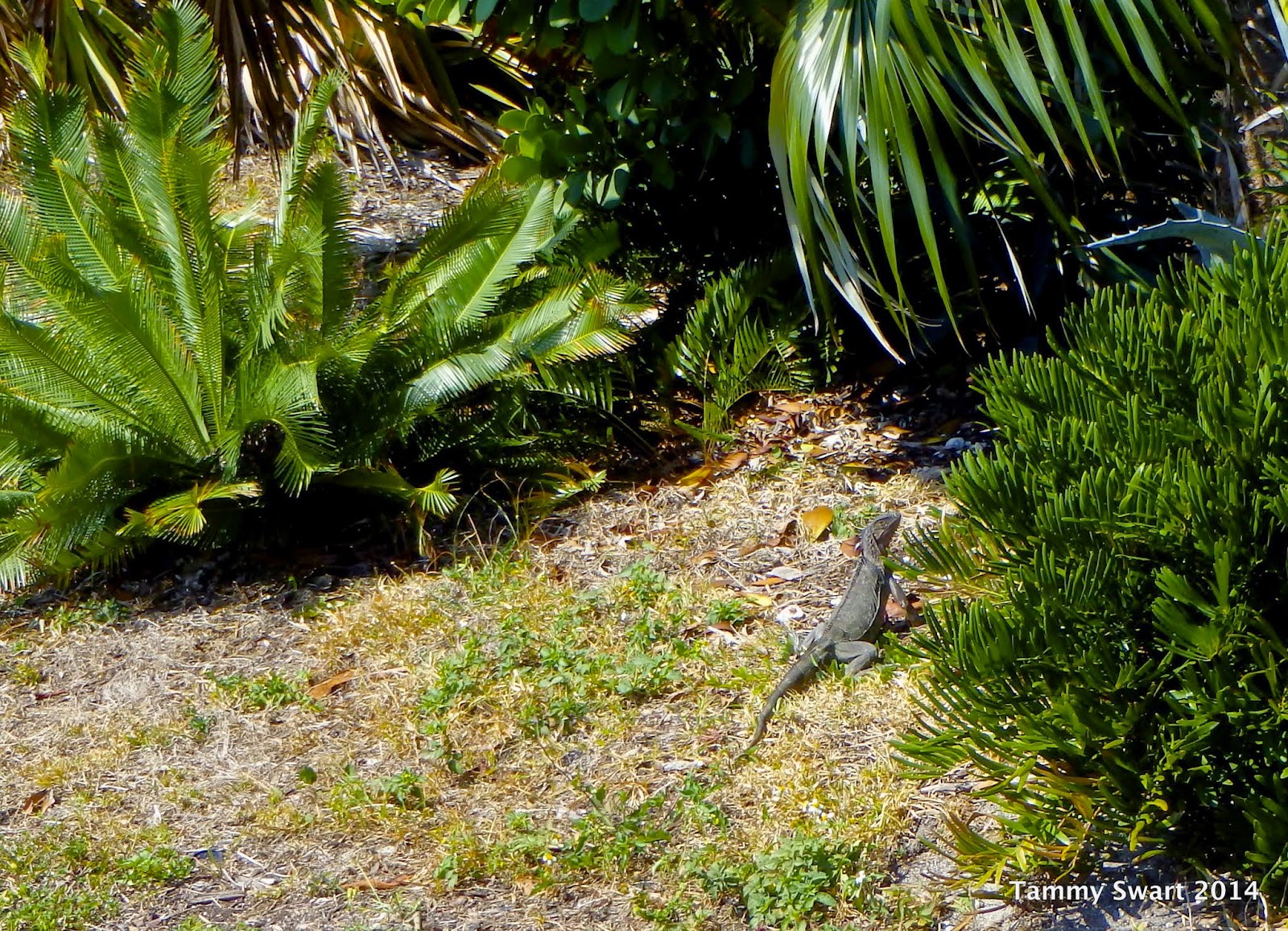 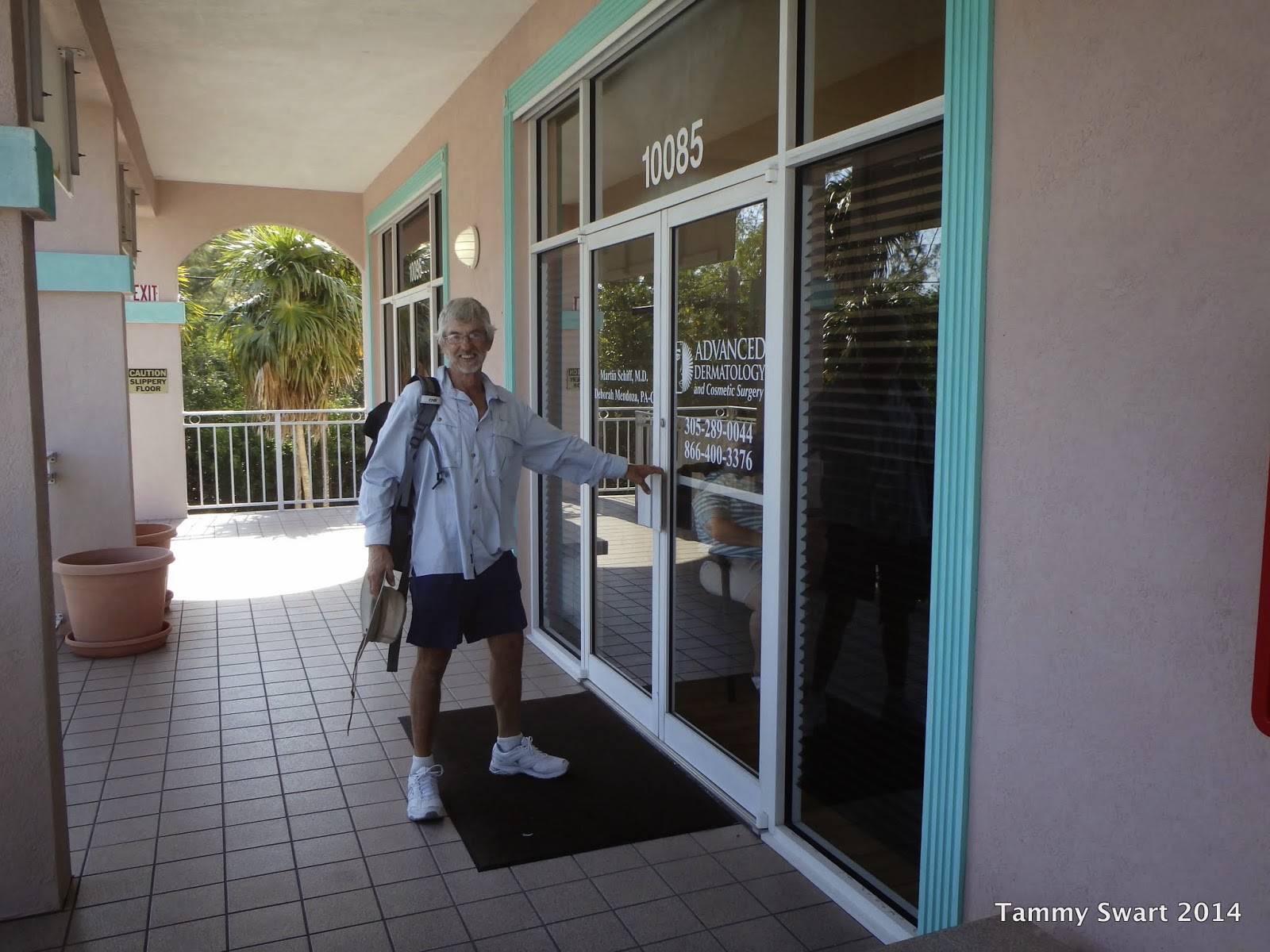 Anyway… focus.  Off to the Dr.’s office.  Finally, just past the airport and the Pizza Hut (is it time to eat?  I LOVE Pizza Hut!) we found the office with half an hour to spare.  Good thing too, it gave us a bit of time for the sweat to dry on our bodies.  Bruce didn’t seem too concerned about it…

The waiting room was small, and it wasn’t long before they called Bruce in.  I waited patiently in my seat for him to return, not knowing if this would be just a consultation or if they would freeze some of the offending spots off today.  He wasn’t in with the Dr. very long when suddenly, the door opened and he came back out.

They had frozen off many spots from his face, hands, arms and legs.  Others, the Dr. said weren’t a problem.  She had given him some advice about avoiding the sun, the most surprising, a reminder that white t-shirts give very little protection from the damaging rays!  Too bad, because that’s the more comfortable color to wear when out in the sun for long periods of time!

So, with the “thumbs up” from the Dr. we paid Bruce’s Medicare Deductible and were on our way.  The Dr. suggested maybe a six month follow up, which we will do for sure… and the reset button has been set on my worry meter.  The rest of our day was spent running a few errands on the way back to the boat, while I kept an eye on the increasingly angry spots on Bruce’s face and hands…

While it wasn’t easy to make this happen, it was in no way difficult.  As we dinghied back to the boat, I asked Bruce how long he thought it might be before we tired of this lifestyle.. he just chuckled.  It’s kind of fun when even a simple trip to the Dr.’s office becomes sort of an adventure.