A Day In The Life - Ya Gotta Get OFF The Boat!

Our days are never the same.  We never know what is going to happen when we get up in the morning… We may have SOME idea how it will go… But that’s about it.  And that’s the way we like it.

A GOOD day goes something like this.  Get up in the morning and get a few necessary chores out of the way.  This morning, we (finally) cut Bruce’s hair.  I’ve put it off because there just isn’t a good place to do it.  Today, with the winds down a bit, I decided that the cockpit was as good a place as any.

After cleaning up THAT mess… I launched into a full scale cockpit cleanup, long overdue.  That took about an hour, but once done, I felt that we had accomplished enough and were now free to PLAY! 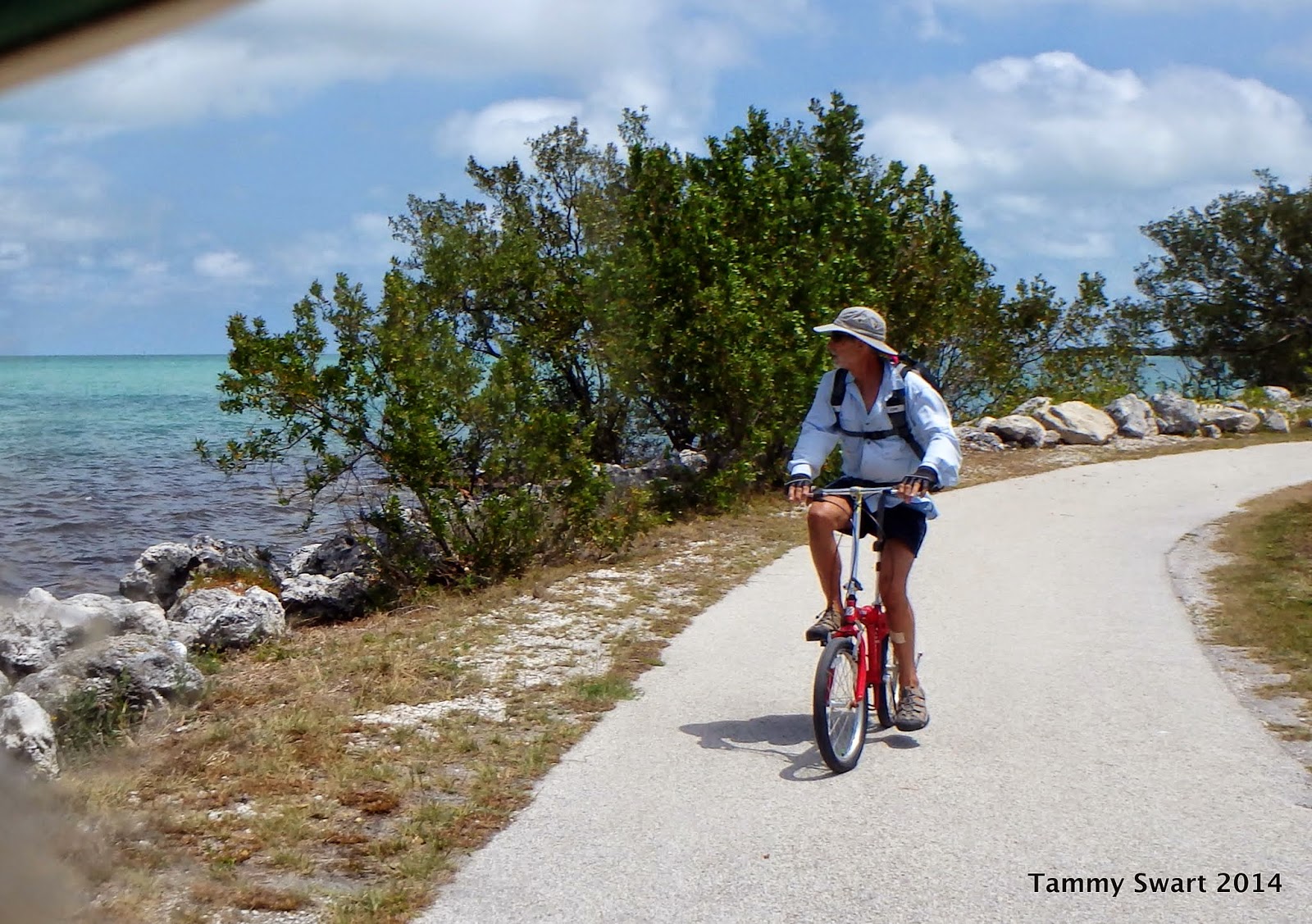 We put on our swimsuits beneath our clothes, in hopes that our day would include a swim.  We mounted our bikes and pedaled away towards the Seven Mile Bridge.  Another Cruiser had told me that there was a place called Pigeon Key, where you can learn about how the Seven Mile Bridge was built.  Pigeon Key is a blip on the map, where Henry Flagler set up a compound to house the workers and for use as a command center from which to run the operation.

The project was dubbed “Flagler’s Folly”, but in the end, it was renamed as the “Eighth Wonder of the World”.  Just thinking about the massive project built back in the day when things were more simple, is mind boggling.  It’s no wonder the people thought it would be impossible to accomplish. 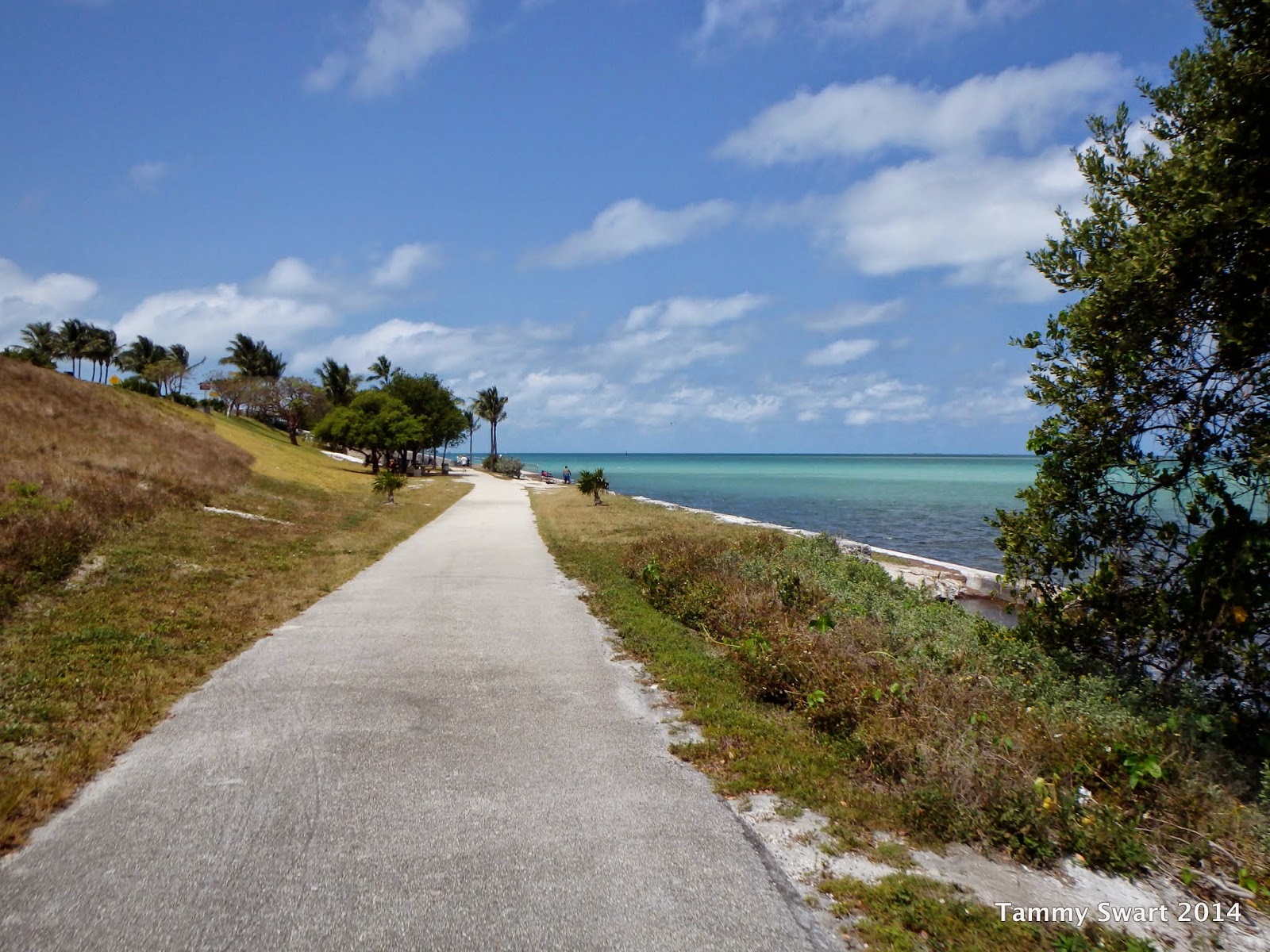 We took the bike path and arrived at the base of the beautiful old bridge thinking how much more character it has than the newer structure.

It’s a shame that it deteriorated to the point of replacement, but when we took off across the water, we could see that it was both ragged as well as unrealistically small for use in this day and age. 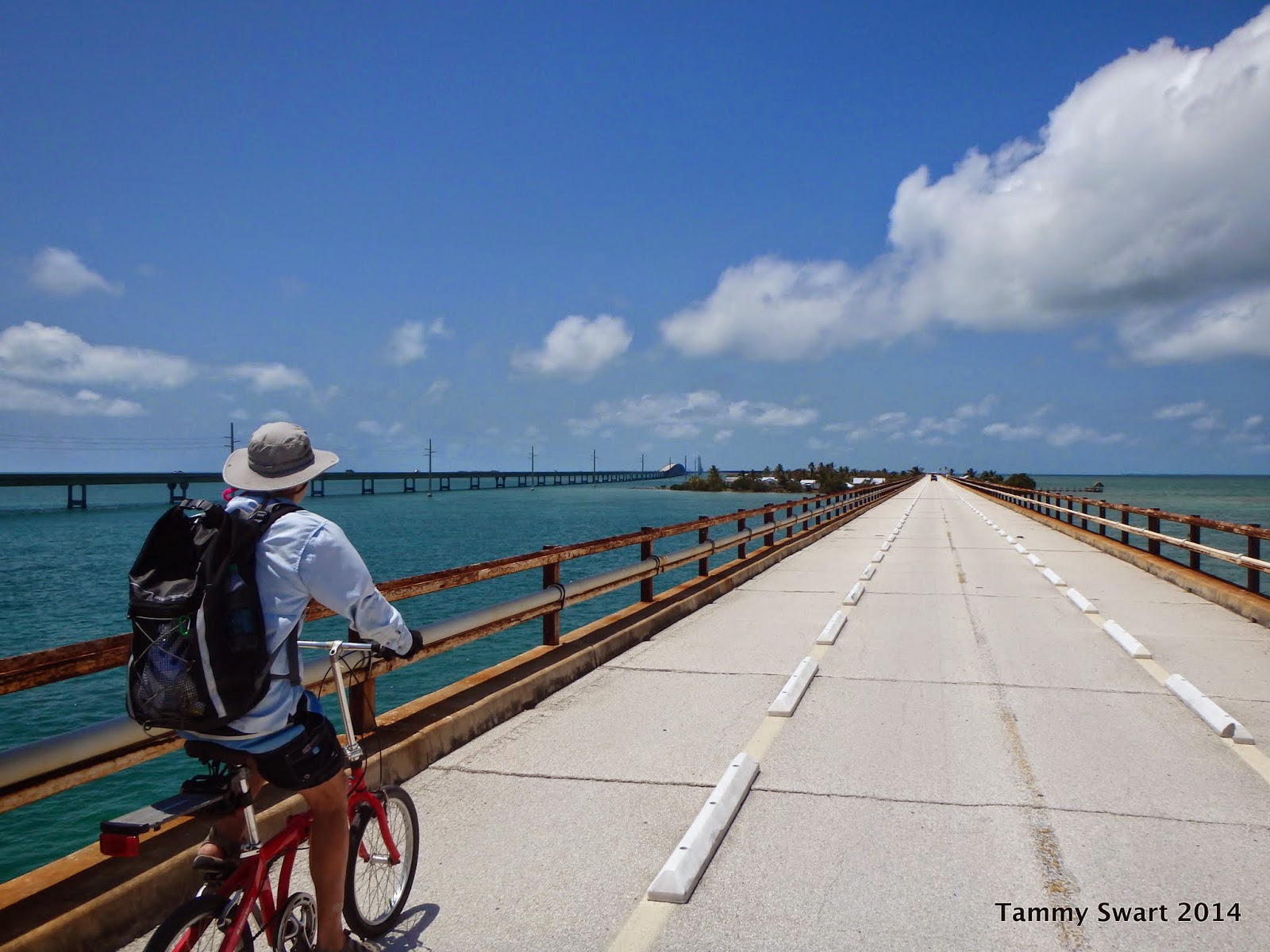 The day could not have been more gorgeous for our bike ride.  The light winds in our faces promised a faster and easier return ride. 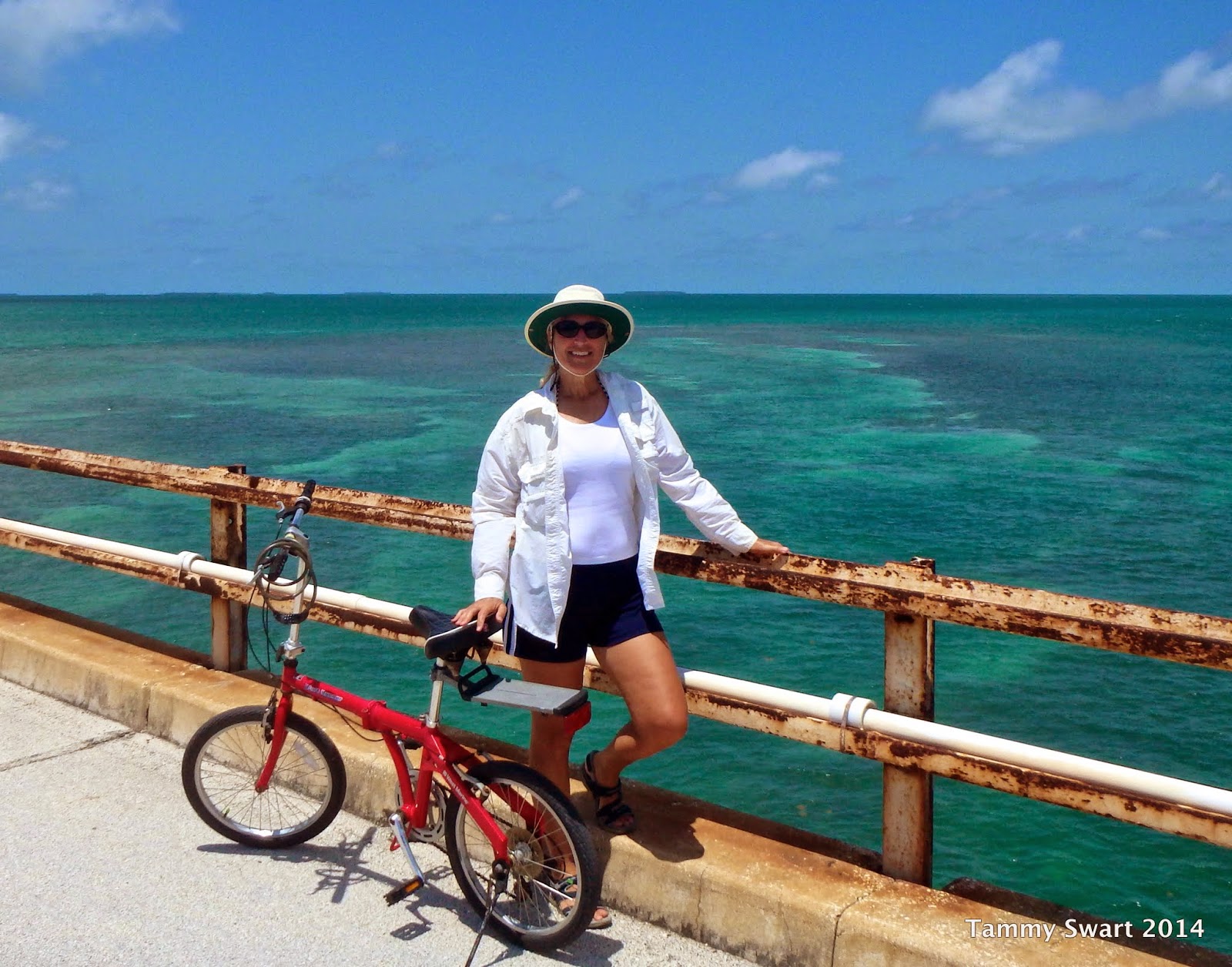 We paused often along the way to peer over the side, finding scads of rays, several different kinds… and some kind of huge fish schooled in the shadows beneath the bridge.

I think they’re Tarpon, but Bruce isn’t sure…  They were just hanging there, nose to the current, chillin’ in the shade. 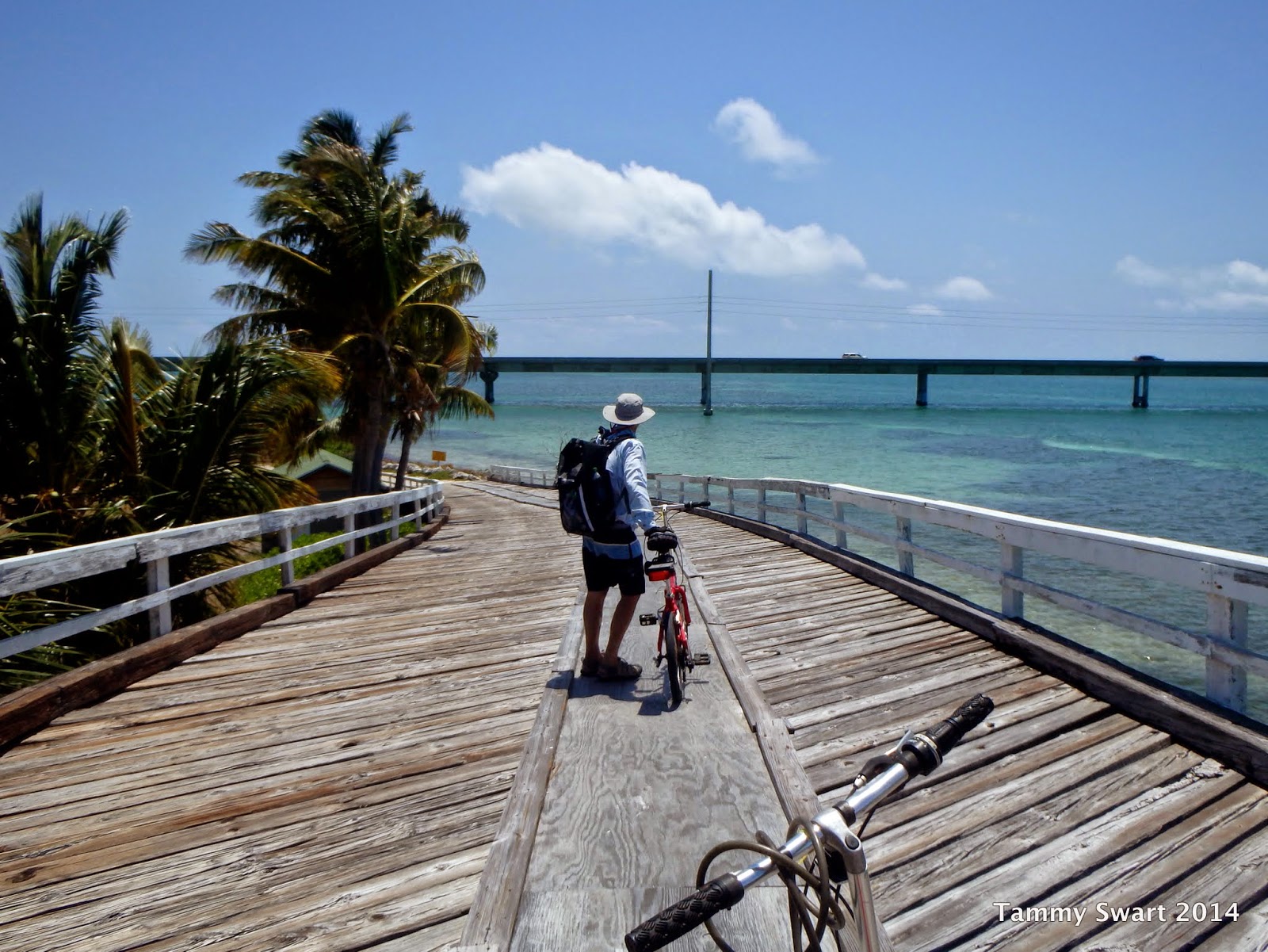 We were excited like Tourists!  It’s fun when you can use that excuse to reveal your inner child!  The Locals just smile and shake their heads indulgently…  And I don’t care.  We finally reached Pigeon Key, sweaty and curious about what would come next.  We took the rickety ramp down to the Key and found a hot, dusty ghost town.

The buildings built to house and feed the work crews, were now a sort of museum.  The doors were open, but there was nobody around.  Evidently the Easter Holiday was disrupting the Historical tours normally offered here.  There were very few other people, some who had come over on a ferry boat that runs every so often…

We walked our bikes towards the pier we had spied on our approach to the Key.  That looked like as good a place as any to explore.  We parked our bikes in the shade beneath the old bridge.  Looking up at the cracked and patched structure… I guess it’s obvious why they shut it down.  I guess we’re lucky at this point that we can still enjoy this portion of it. 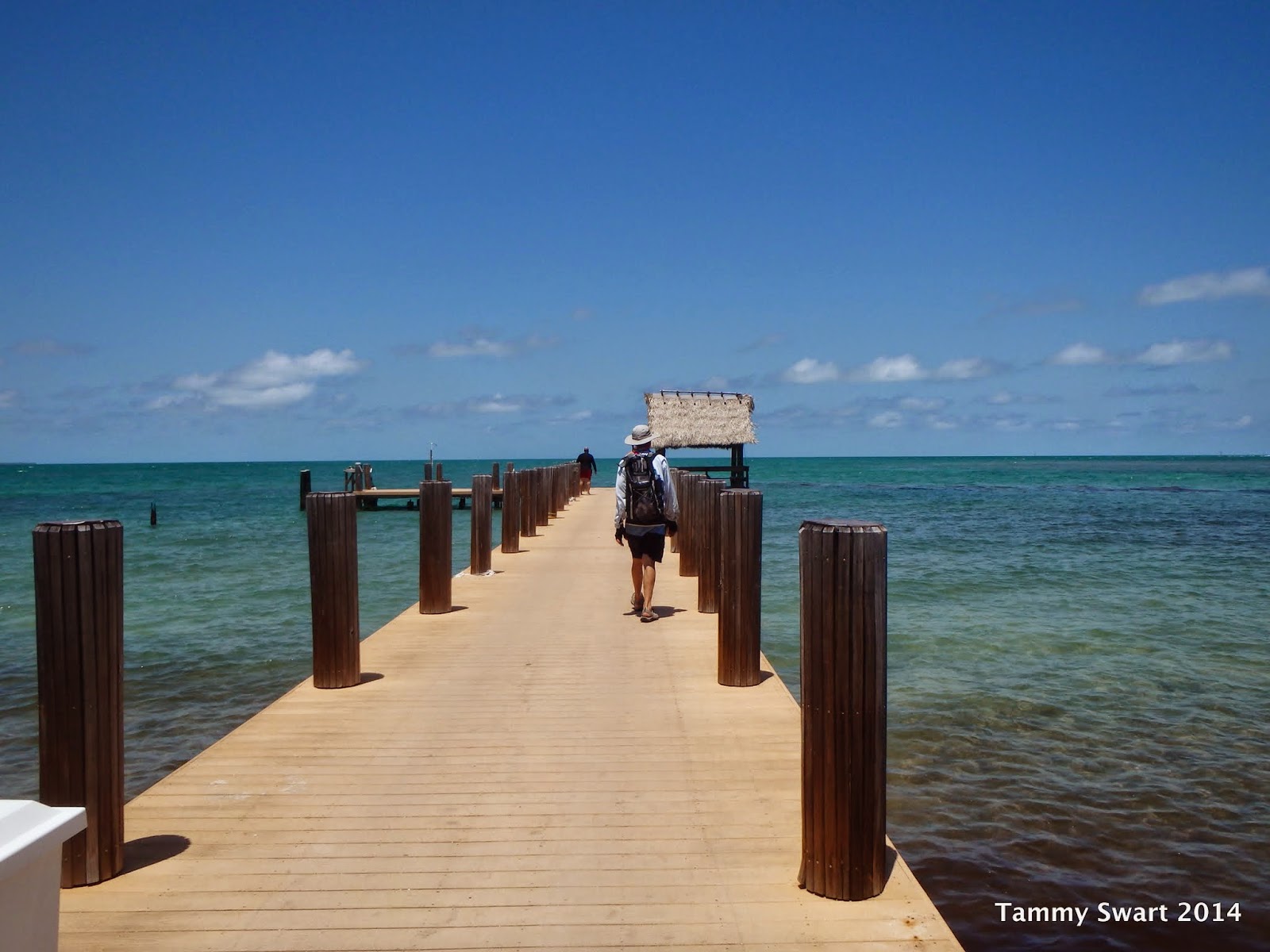 We walked out onto the glowing waters by way of the pier.  The end supported a cute little tike hut which served as the ferry boat landing. 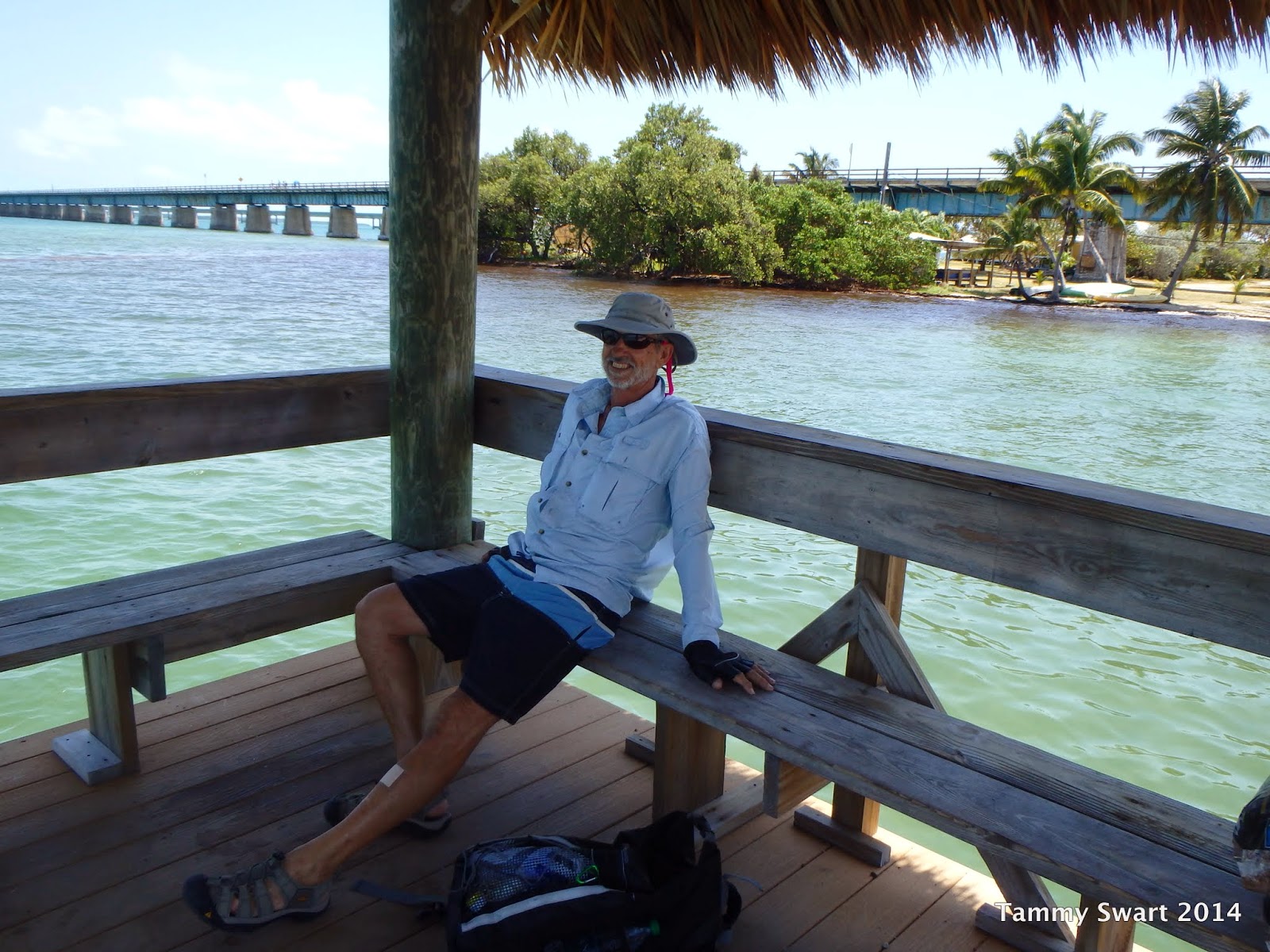 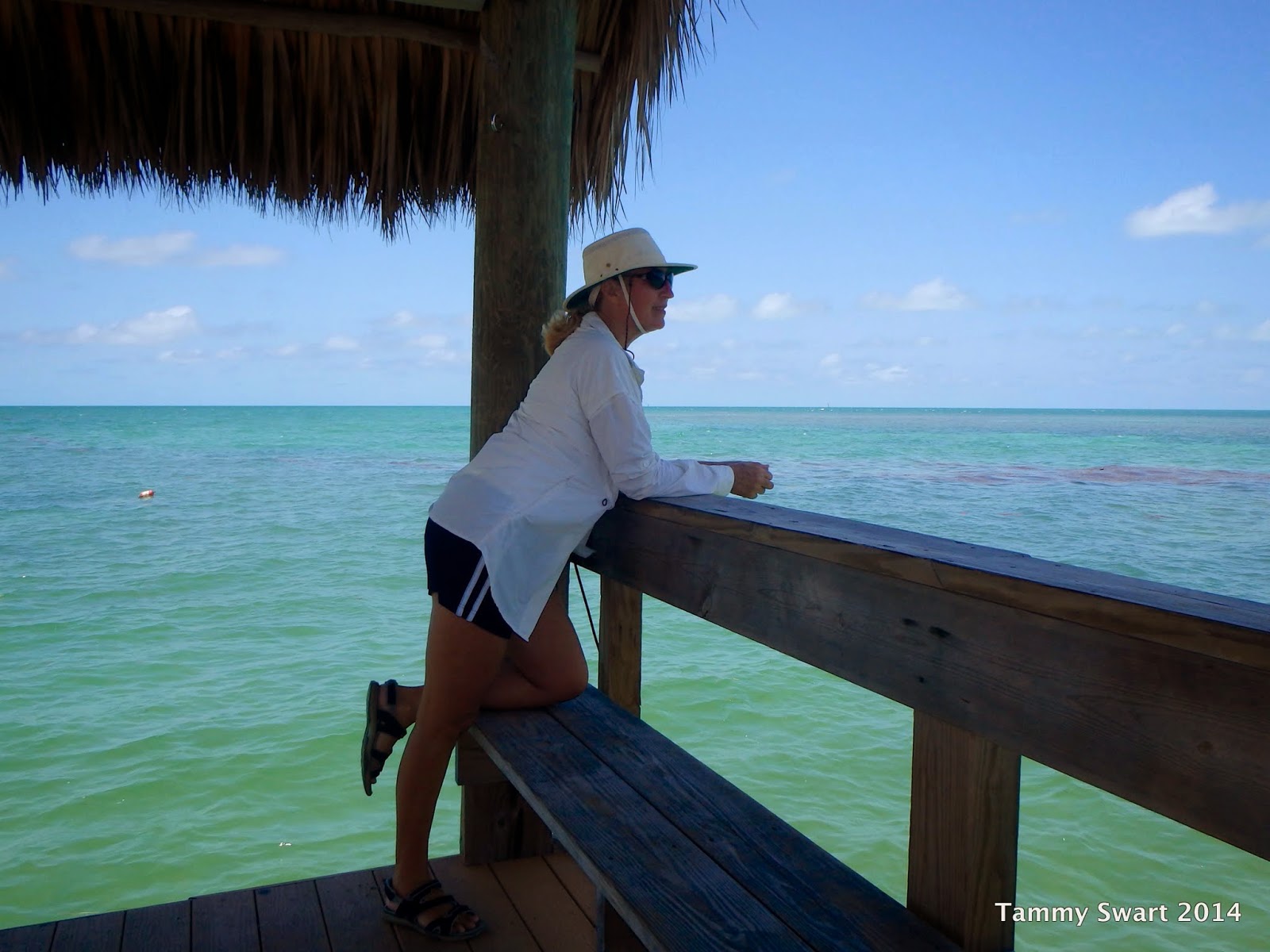 It was deserted.  We stared out at the undulating carpet of blues and greens and I felt suddenly sweaty… and sticky… and the water was calling to me.  I spied a fresh water shower at the other end of the pier and a ladder leading down into the silken waters… and I started stripping off my clothing.

Bruce looked at me with surprise, then followed me as I descended the metal ladder.  I’ll tell on him now, he had to strip naked and put his swimsuit on, and as he was pulling up his suit, a couple started down the pier in our direction… These close calls are becoming a THING with Bruce!

We reveled in the silken feel of the water.  It was a PERFECT temperature and contrary to the sign warning of strong currents and dangerous sea creatures (??? dangerous sea creatures???) there was no current at all…  Only the gentle swells lifting us and then lowering us softly as the water caressed our tired and hot bodies, feeling so much better than any Spa ever has…

The couple arrived at the tiki and I heard the woman say how much she wished she had brought a swimsuit.  I called up to them that I promise not to take pictures and post them on the internet if they wanted to strip down and come in… the water’s fine!  They mumbled a little bit to one another and the man said “Are you serious?”.  I said come on in!

And they stripped to their underwear and joined us in the delicious water.  We chatted and from their foreign accents, I assumed that they weren’t from around here.  It turned out that they live in Florida now, but are from somewhere cold like Norway or something… BRRR.  I offered to take some pics for them and promised again not to post them and they quickly accepted.  She wanted to send them to her cold relatives to rub it in!  I can’t say I blame her at all!

By the time we had backtracked to the bridge, we could see that the Ferry Boat had arrived at the tiki.  We laughed as we expressed our hope that the couple had their clothes back on before the small crowd of visitors arrived! 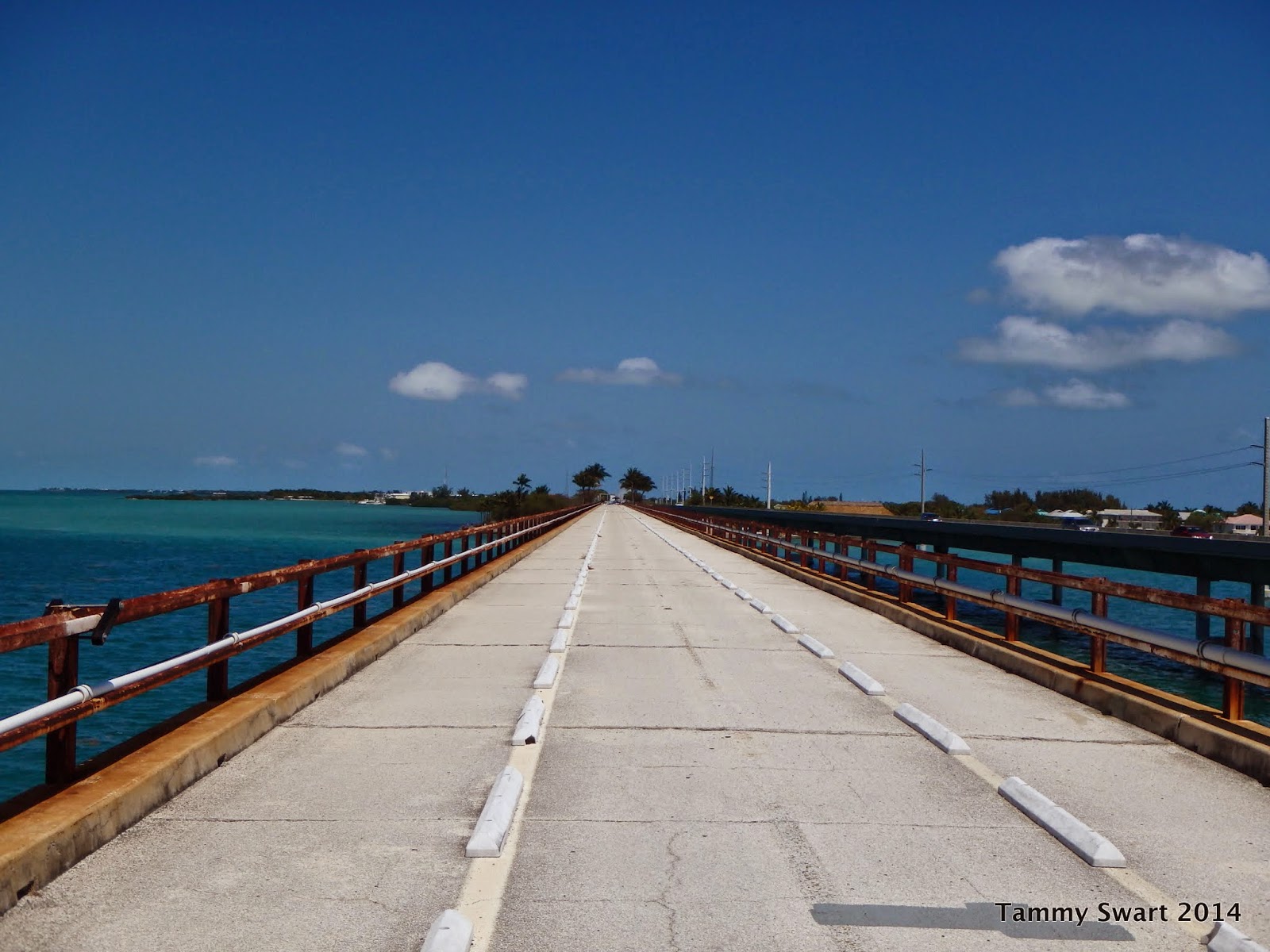 We were right in our hopes that the return bike ride would be with the wind, and therefore a much easier ride.  It was almost effortless as we passed a few other hikers and bikers and made many stops along the way to see the rays and fish below.

It seemed like a much shorter ride back.  We stopped to drop a few dollars into the donation bucket towards repair of the deteriorating bridge… We met some fellow Cruisers and chatted for a bit. 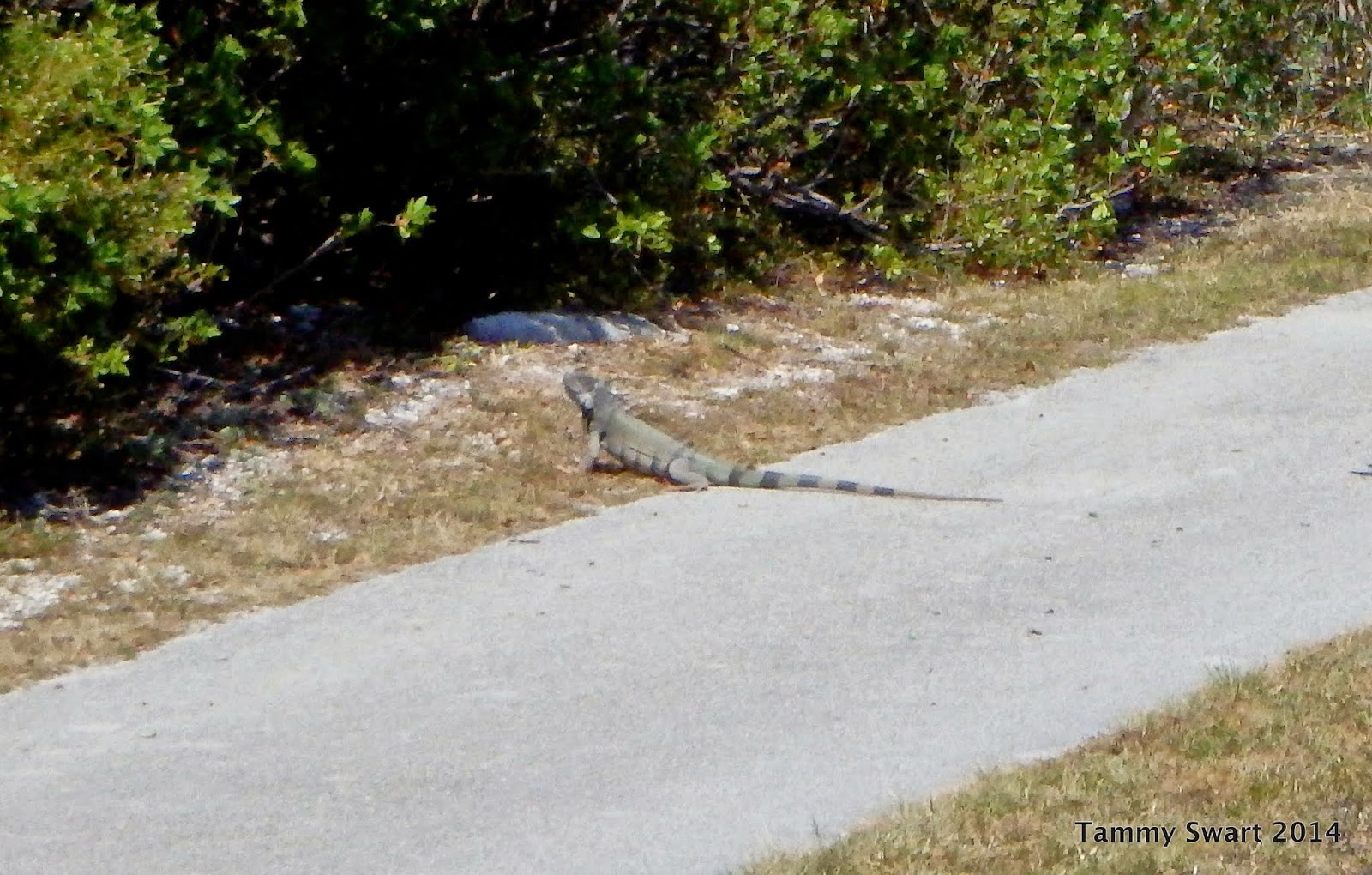 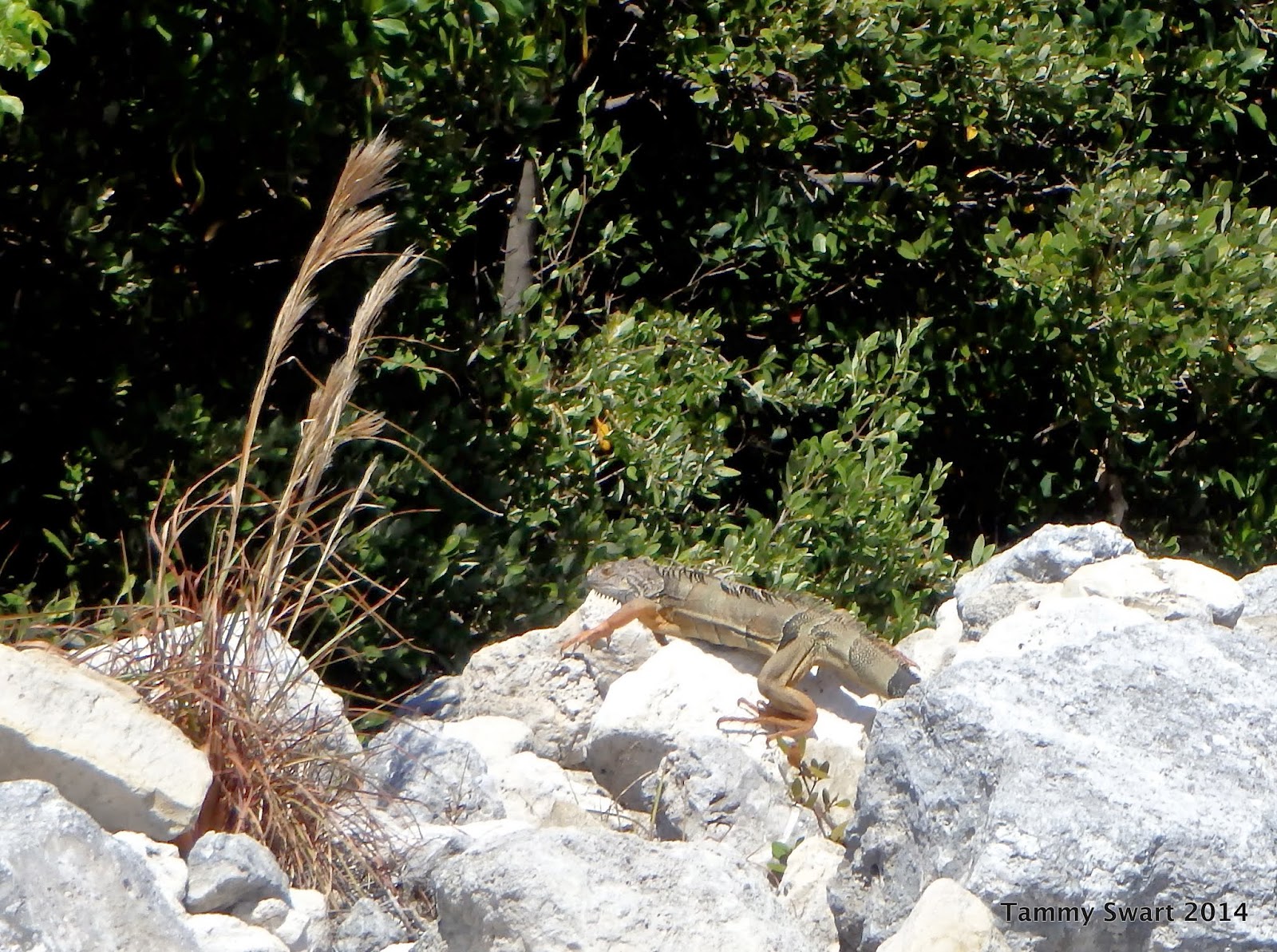 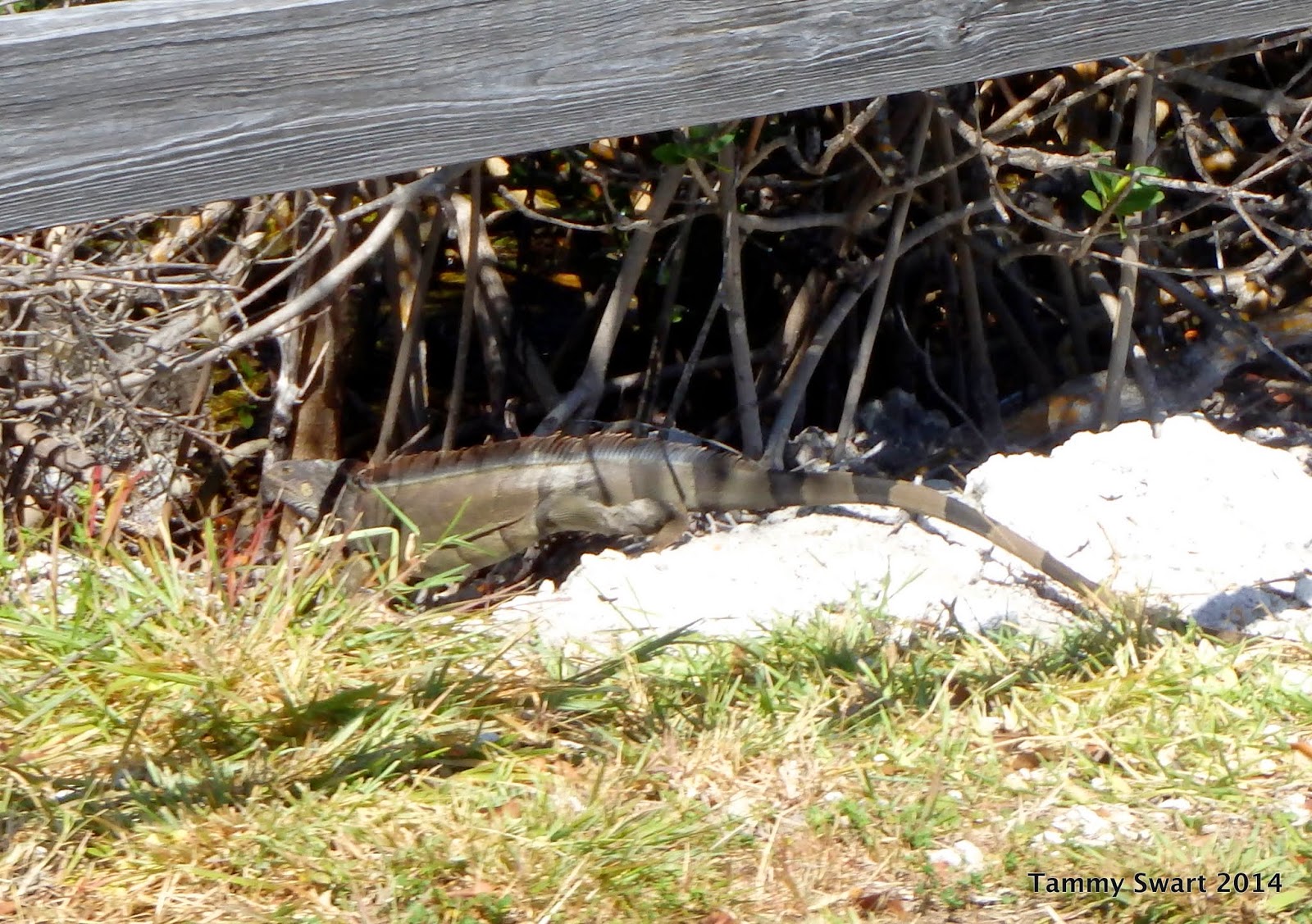 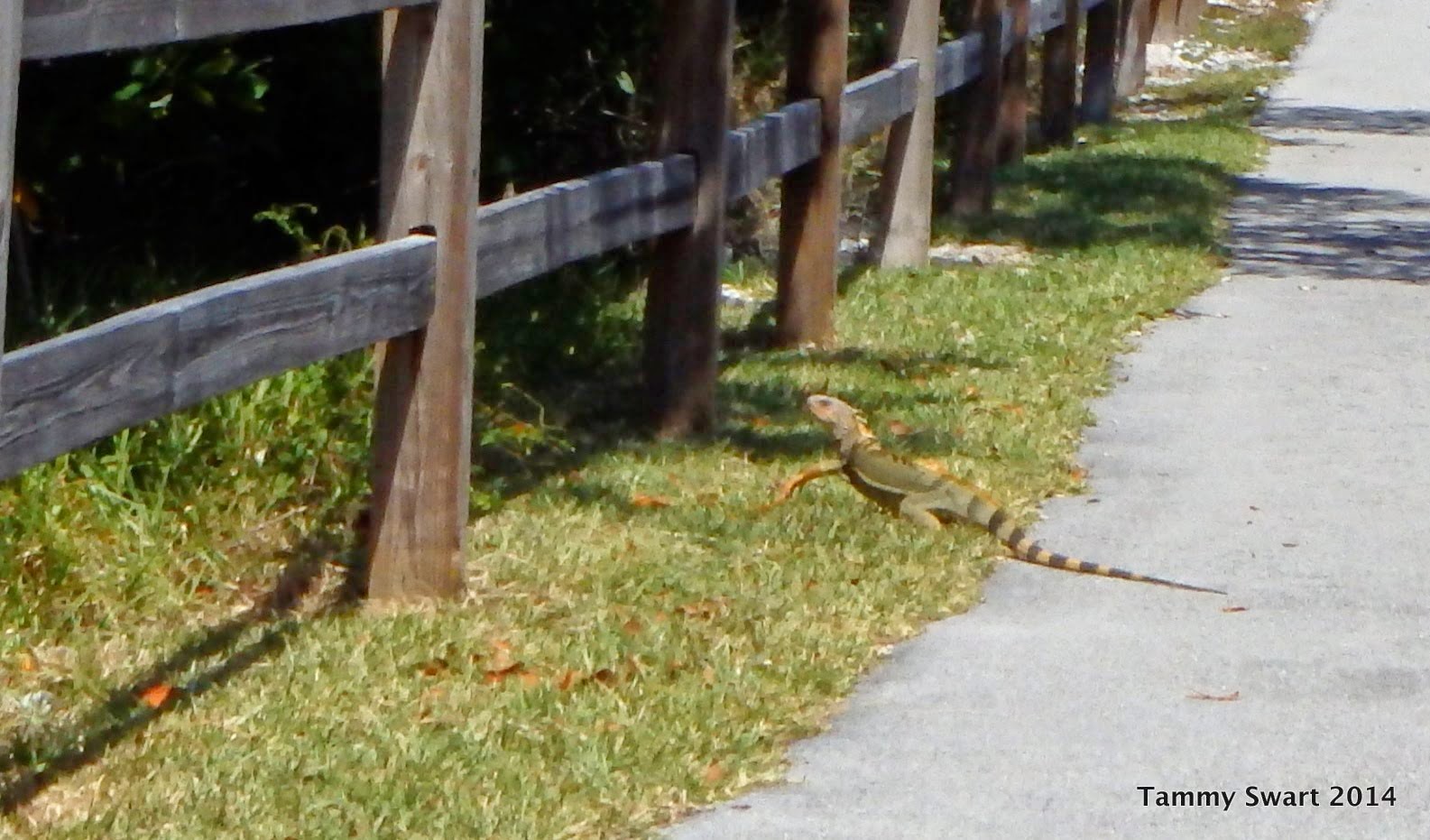 Then we retraced our path along the road where we found Iguana Central.  They were out in droves, sunning themselves on the rocks, on the path and in the grass alongside the bike path.  I snapped as many pics as I could and even with the elusive creatures darting into the bushes, I was able to get a few.  I just love them!  And it’s probably a good thing that they run like hares, because if they didn’t I would be scared of them!

Upon arrival back at the marina, we had one more chore to attend to before we headed home for sundowners.  We had to fill our water jugs at the marina fill station.  While there, we were greeted by Captain Jack.  This man is a Marathon Institution.  He has been picking flowers from the bushes around the marina and walking around in search of a Lady to which to present his lovelies. 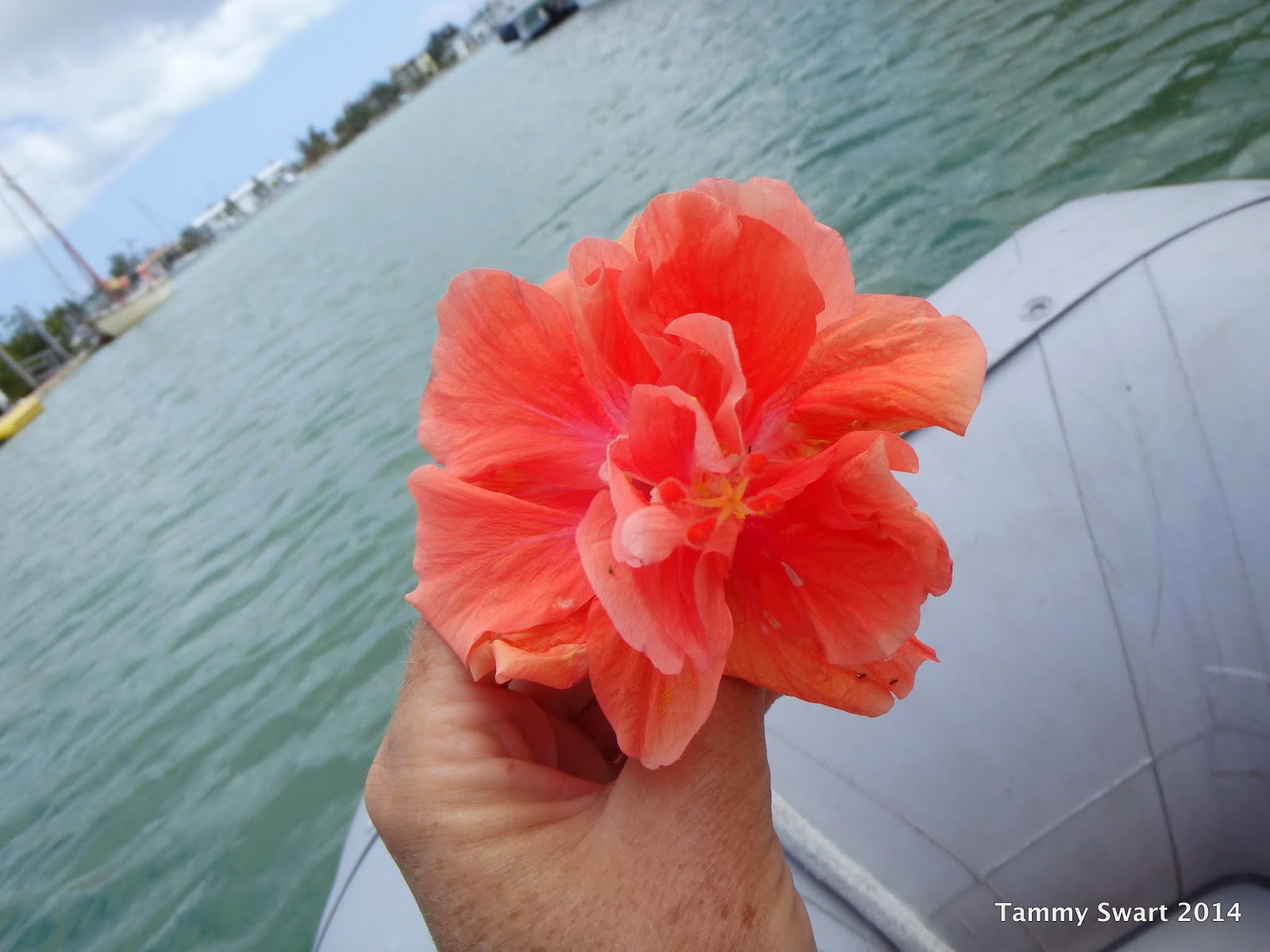 I have been the recipient of not only a flower, but also, even more special… a hand painted shell depicting a beach and palm tree.  Today I got yet another flower from this kindly old gent…  I just had to get a picture with him and I wondered what kind of young man he must have been….

What a nice thing to do, walking around brightening the days of the Ladies here in the marina.

And so we retired, me with my beautiful flower and both of us full of memories of breathtaking beauty, a little bit of naughtiness, and a whole day full of surprises.  It occurred to me… you don’t need a plan and you never know what fun you’ll have if you just get off the boat!