I deleted the NOR when it first appeared in our in box.

But... then my mind went to work on me.  We haven't even taken Dos Libras across the Bay.  It's been more than a year!  Maybe this is our opportunity.  So, I asked Bruce if he was interested in joining this annual event in the Cruising Class and he said YES!

This, the 51st Navy Regatta, is the biggest racing event in the Corpus Christi area.  Each year, racers and cruisers from all of the area clubs come together to recognize and show appreciation for our local Naval Base by inviting Enlisted Men and Officers to crew as guests aboard our sailboats.  We race over to NASCC where we anchor out and party, then we race back to Corpus Christi the next day.  Bruce and I have done this race many times and it's always the event of the year. 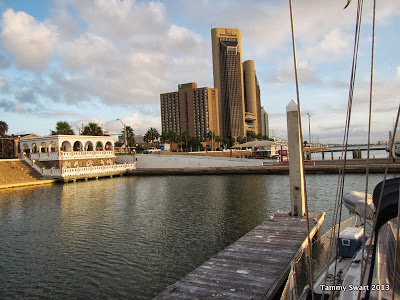 We enticed friends Robert and Kathy, and our daughter, Brittney to crew with us.  Our weekend began with a sail from Port Aransas to Corpus Christi.  We secured a slip for the night in the newer part of the Corpus Christi Marina.  These are very nice floating slips, but I will say that getting into our assigned slip was a bit tight.  Once Dos Libras was secure and things were tidied up, we relaxed in the cockpit and enjoyed the view of our beautiful City.  These days, there are many "lasts" and this could well be the last time I will see this shoreline from a boat, at least for a very long time.  I tried to see it through unfamiliar eyes and found it very nice.

We attended the Kick-Off party at BYC on Friday evening.  The place was crowded and it looked like the regatta would be well attended.  We spent a quiet night aboard, followed by a peaceful morning...

Until... what's that SMELL!?  Some rapid investigative work found a clogged vent on our aft head was pressurized to the point that sewage was seeping out of the hose and slithering down the inside of our hull under the bed!  OH NOOOOOOOO!!!!!  Why does stuff like this always happen when we have GUESTS!???  Well, at least Robert and Kathy are "boat people" and didn't hold it against us.  Robert even got right in there to help!  I reserved the best job for myself.  I slopped up the slime with paper towels, then cleaned it with Pine Sol and followed up with a splash of bleach water for good measure.  All the while, Kathy ate her cereal, seemingly unaffected by the scent wafting through the AC vent which pulls from underneath our bed.  Gotta love that woman! 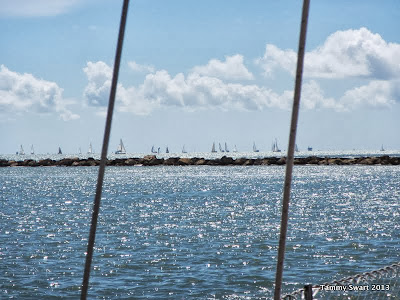 Well, once that was over, we pumped out the head and turned our bow towards the Bay.  There were over 30 racers out there jockeying for position at the start line.  The Bay was sparkling and beautiful, the winds were light.  Looks like a good day for a sailboat race! 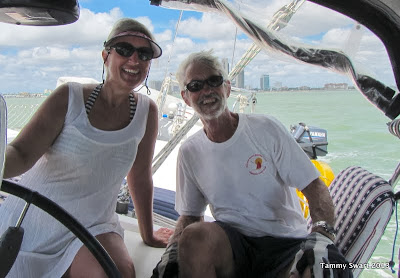 Normally we would be in the mix hovering around the start line, but in Cruising Class... we had no start.  We just took off leaving Corpus Christi in our wake! 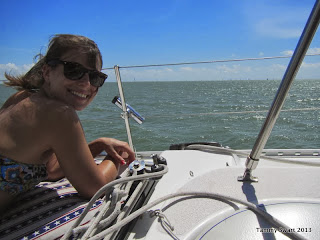 We had our tanks full of fuel and water and our Boat Babe on the back deck...  Now THIS is the way to go! 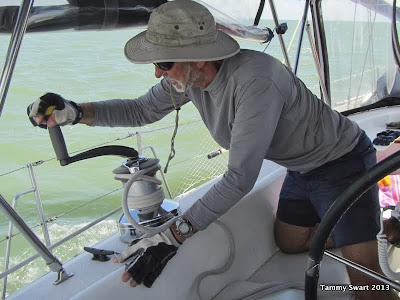 Bruce and Robert got some "racing" in as they worked to trim the sails for speed.  The boat did SO well and Bruce is still talking about how nice it felt to be bounding across the Bay in true racer style... but with added perks. 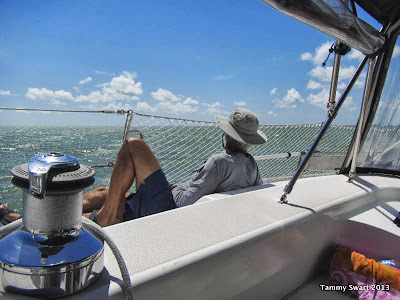 That said... it wasn't all work and no play.  There was plenty of time to just hang out... 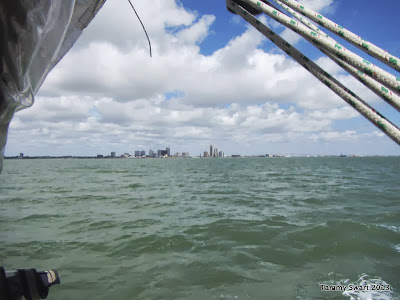 and soak up the beauty of our surroundings.  We watched as the waters of the bay went from the deep green to a less attractive brownish green color as we neared the Base.

We reached the finish line and ducked out of the way as racers came across.  No finish for us! 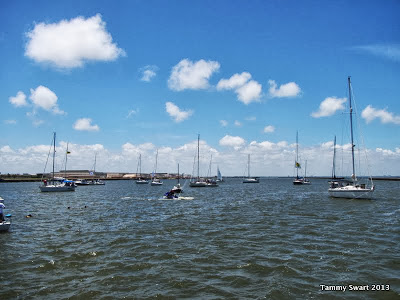 We doused sails and motored into the anchorage and found our spot at the upper edge. 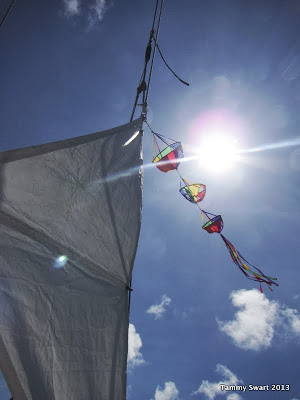 We were DONE!  We set up our riding sail and my whirligig... and had a snack while we waited for Brittney's girlfriends to arrive by car. 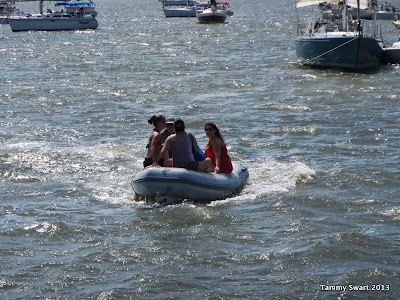 Bruce went off in the dinghy (another perk of the cruising class) to pick up the girls and the fun began. 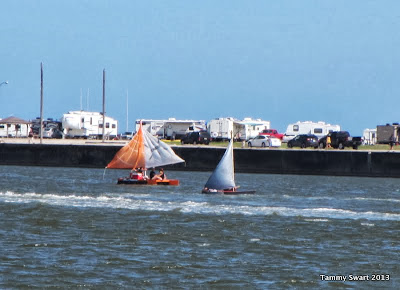 The traditional "Anything that floats but a boat" race was about to start. 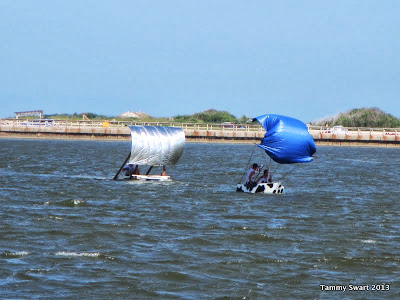 We lined up to watch as these hilarious and unusual floating creations blew across the course. 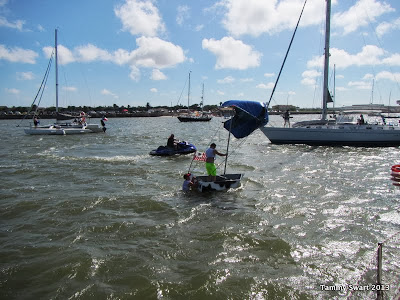 And every year... there's gotta be that ONE guy who gets outta line and blasts through the mooring field.  A chase vehicle followed to keep this thing from bumping the sailboats too badly and nobody got hurt.  Well, maybe some pride, but that's all.

The crews aboard the racing boats began to leave for the rewards banquet ashore.  We relaxed in the water until sundown.  We weren't going anywhere. 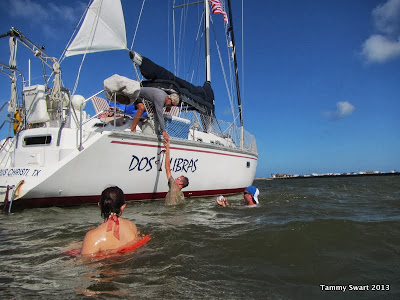 Suddenly, we noticed a couple of Boys drifting rather close.  Brittney hailed them and Bruce offered them libations. 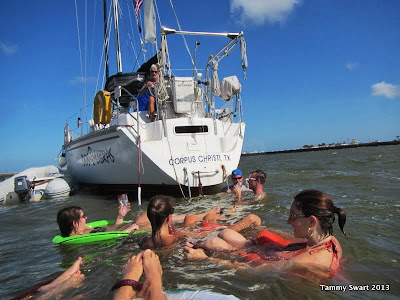 BOYs are why the GIRLS are here!


Somehow, things got sideways as I noticed that the Boys were all of a sudden, aboard the boat with BRUCE!  Brittney... Bruce took your BOYS!


The Boys hung out with Bruce for a while asking questions about the boat and stuff.  Bruce took them back to shore and I learned later that these guys weren't as dumb as I thought... They got Bruce's phone number and send an invitation to dinner sometime soon and oh, by the way... Brittney and a friend could come along too... 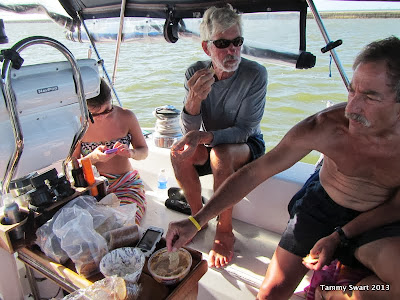 We all began to get prune toes so we got out of the water and had a snack while drip drying in the cockpit. 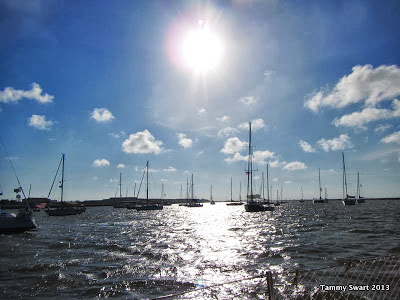 Us old folks watched the setting sun after the girls were dinghied to shore.  A delightful quiet settled over the anchorage as we were the only ones aboard until after we went to bed.

Morning came and the anchorage started to buzz with crewmembers returning to the boats for the next race. 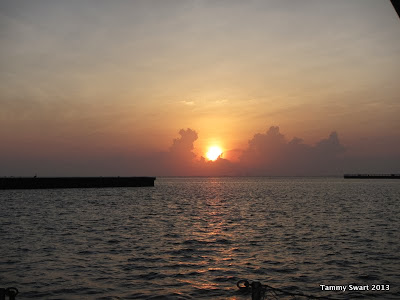 We enjoyed the sunrise with coffee in the cockpit and a lazy breakfast. 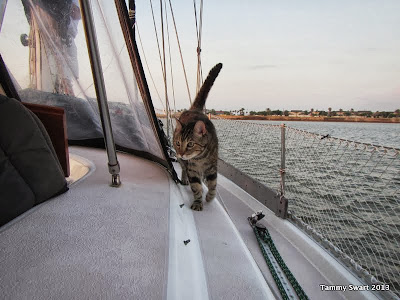 Even the cats were settling into the life...

Jezabelle had some bouts with seasickness on the way across the bay on Saturday.  I'm still not convinced that it isn't as much nerves as anything else... So I made the decision to let her pick her spot for the sail back to Port A.  This turned out to be a success as there was no seasickness going back.  Food for thought...

We weighted anchor once Brittney and our old sailing buddy, Clay arrived.  We didn't wait for the starting gun.  We had a great day catching up with Clay as we watched the water turn back to it's beautiful aquamarine color as we neared home waters.

Our only concern in going back to Port A was getting through a narrow spot in the ICW called "The Eye of the Needle".  The channel markers are often off station and the shoaling can make the passage very narrow.

We made it through and the rest of the way was no sweat.  The boat handles so well it is a pleasure to sail.  Everyone got their chance at the helm, although Brittney declined... choosing to remain boat fluff. There were no trophies to set on our mantle... but we have no mantle, so it's all about the experience.  Once our guests had left and life returned to normal for us, we sat on the back deck and relived the weekend's events.  We were glad we had chosen to do this, our last Navy Regatta.