Birding In Port A

I have been known to become somewhat worthless after a full morning of bike riding around town, so today seemed like a perfect opportunity for a longish trek.  I had planned to spend my afternoon figuring out what we would do with our money when we're cruising.  Since that shouldn't be a very physically strenuous activity, we took off in the cool of the morning for some two wheel exploring. 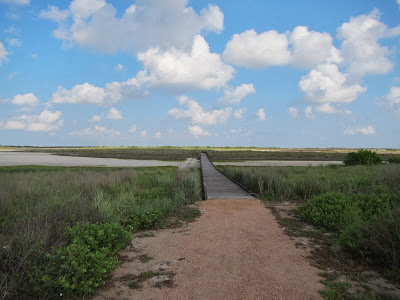 There is a part of Charlie's Pasture that we have yet to explore.  I wanted to find it, but it required a bike ride along the highway, which could prove fatal considering the crazy vacationers running our roads these days.  We were just about to turn back when we found the entrance and dove in. 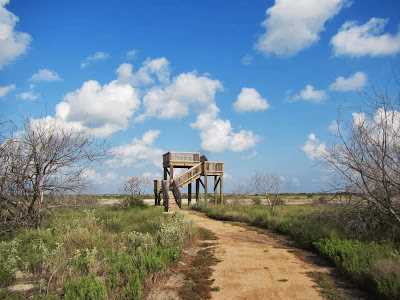 It began very similarly to the parts of the Pasture we have previously enjoyed, but we were happy to finally get to check out the other observation tower we had been viewing from a distance.

The trail looked as if it is less travelled and perhaps less well maintained than the other half of the trail, but it was still a pretty smooth ride.  I was on the lookout for snakes or any other critters we might see, but with the exception of a BUNCH of spider webs and maybe some poop, we saw no sign of anything but birds. 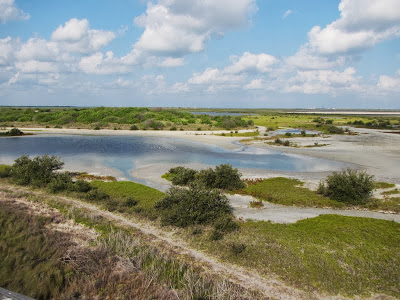 We enjoyed our breakfast of cereal bars and water from atop the tower.  The winds were a whisper and we spent long moments staring off into the distance trying to catch a glimpse of my favorite Roseate Spoonbills.


I finally did see a couple flying by, but the closest we came to birdwatching were a group of black and white birds lounging in one of the few watering holes not left barren by the drought. 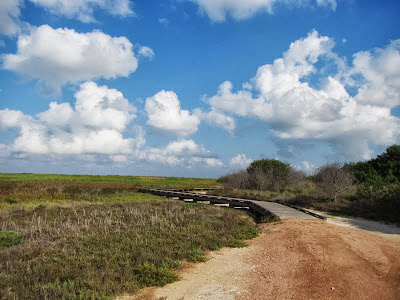 We saw a fellow cyclist coming up the path and came down from the tower to try to get back on our way before he passed.  Lucky for us, he was able to stay in front of us.  We took the left fork in the path to his right and found ourselves at a dead end on the edge of a vast ocean of cattails.

A sign indicated that the path was in progress and it all made sense.  This path would someday join the more familiar pathway so that it would make a larger loop through the wetlands. 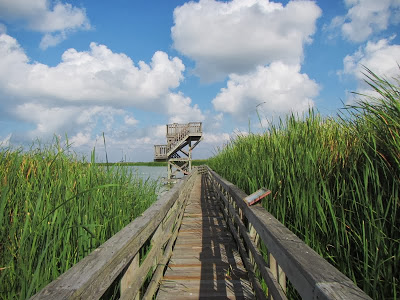 We turned to follow the lone cyclist and caught a glimpse of him far across the salt flats.  We knew that if we hadn't seen him go that way, we would have turned back.

We walked and biked across the vast and barren salt flats until we came to a familiar road.  This lead to another of Port A's birding pathways and we took it.  The boardwalk took us right through the middle of that cattail field we had seen from the other side.  There was another observation tower at the edge of a bizarre pond. 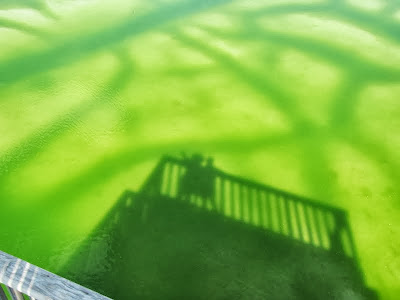 It was the strangest color of green and very shallow.  The bottom was riddled with deeper trenches in which huge fish could be seen swimming lazily along.  It was so quiet except for the sounds of dozens of different birds.

We could hear them out in the cattails.  We suddenly heard a splash followed by the sound of a bird meeting his death as one of the alligators, advertised by signs along the path, must have snatched him up. GULP...

It was amazing to stand here in the middle of this place and see the wildlife just doin' their thing as if we weren't there. 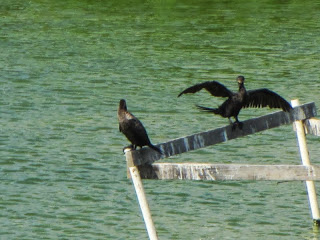 These cormorants were drying themselves in the middle of the pond. 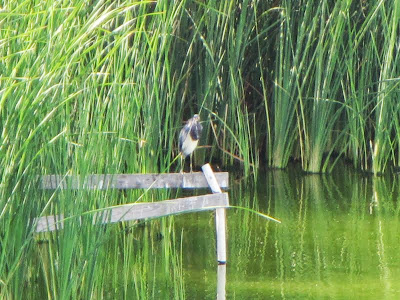 I think this is some kind of night heron.  He ignored us and continued with his grooming while we wandered up and down the boardwalk. 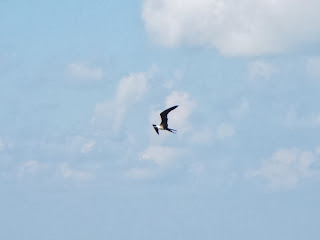 First one, and then a second frigate bird began dipping, soaring and swooping over the far end of the pond. 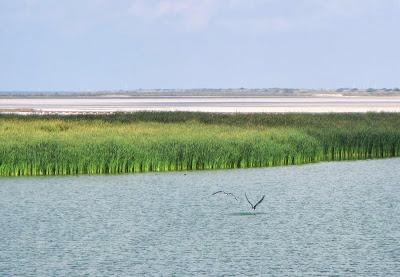 Just when I thought they would come over to our end, they would bank and go back to the other side.

I took a walk to the far end of the boardwalk.  I couldn't hear my footfalls as I crept along.  I peered into the cattails and was rewarded by a glimpse of a tiny bird hopping around from one reed to another.  He was also grooming himself as if he couldn't see me. 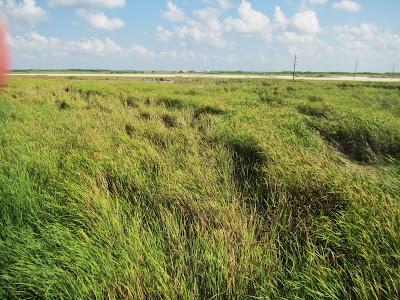 Two baby duckies came through as I sat and stared.  I could hear their mother off to my left calling them.  They would each answer with a peep of their own one by one.  I worried about seeing one of them get eaten by that gator.  I could see an area where the cattails seemed to be somewhat flattened and wondered if it was from the alligators.  I climbed back to the top of the tower to take a look and sure enough, there was a large area flattened out.  I guess I'll never know why...

We could have spent hours there watching the animals come and go.  There are many others listed on the boardwalk that we saw no sign of.  We wondered how it was that we had never been to this place.  We love to explore and today was such fun but it was time to get back to the boat and the endless "to do" list.  A couple on our dock have invited us to this place to hear their talk on birding.  Maybe we'll have to make time to come back and hear what they have to say...