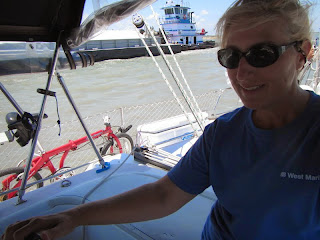 Bruce and I were on such a high.  We had successfully managed to "discover" a new place and had partaken of all Army Hole had to offer for the past three days.  We were enjoying the feel of our boat bouncing on the chop towards home.  We were feeling "as one" with our fellow followers of the ICW.  The cats were not hurling body fluids around down below.  Life was good, except for one thing….

We had been motoring, or motor-sailing the whole week.  Bruce and I were longing for the quiet swish of water alongside our hull without the monotonous drone of the diesel.  The winds had finally come around to our beam and had strengthened enough so that we could make good time by wind power alone.  What went wrong?

Sails were raised and trimmed.  Between the favorable current, the ample wind and the engine boost, we were doing 7+ knots.  We were ready to turn the engine off and SAIL!

We have a feathering Max Prop on Dos Libras, but for some reason, it doesn't always feather when we shut the engine down.  This causes the prop to continue rotating and we can feel an annoying vibration. We always turn it off in gear going less than 3 knots, which was the correct procedure on our last boat.  Now, sometimes it works, sometimes it requires some manual assistance in the form of Bruce putting on a glove and manually stopping the prop shaft from spinning once I shut off the engine.

So, to that end, Bruce took his position down below while I worked down to the leeward side of the channel so that I could come upwind to slow the boat to under 3 knots.  This has ALWAYS worked before!!!  Unfortunately, this time… the boat slingshotted to the windward side of the channel failing to reduce speed sufficiently before I was quite over the line and out of the channel in a spot with zero tolerance for such behavior. 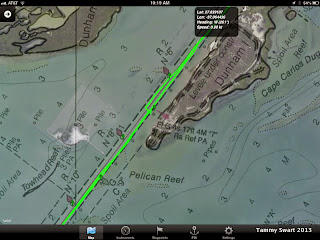 My mind processed all of the incoming information in slow motion.  I saw our speed resist slowing, then gradually begin to drop as we neared the green side.  I saw the depth gauge drop alarmingly.  I was so close, just a little bit more… there!  Under three knots!  I shut the engine down as I spun the wheel to Starboard mentally willing the wind to blow our nose off and back into safer depths.  We made it!

But nooooo… we didn't!  The boat came to a mushy stop so gradually I had to look for a stationary object ashore to be sure.  Nope.  Aground!  I did it!

We sat there and blinked at one another for a while, as one by one…, the barges we had passed earlier made up the time and left us in their wake.  Where's the LOVE people?!! 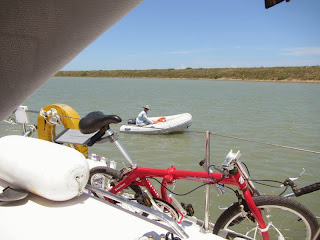 We devised a plan. We'll splash the dinghy and use it to push our nose around.  We set to work loading in the gas tank and dropping the dink into the water.  Bruce hopped aboard and started to buzz off, but WAIT!  Don't we need to talk about what will happen once we're free?  So, we talked out our plan and off he went.

You wouldn't believe the power a little 8 hp motor on a 10 ft inflatable can have against a 45 ft., 25,000 lb. + sailboat.  First he tried pushing us into the channel the easy way… it didn't work.  Ok, lets go back the way we came.  He went over to the Starboard side and pushed the bow in a 3/4 circle and back out into the channel with the help of the diesel.  I was only mildly afraid that we would pop free and I would run over him.  Can't think about that now…  Finally we were moving freely as I waved my arm and shouted for Bruce to get clear.

I turned into the channel and held course steady at 1.5 knots while Bruce "Ramboed" up to the Port side, climbed aboard and moved the dinghy to the stern where he tied it securely for the remainder of our trip.  He came back to the cockpit and stated simply "Nothin' to it".


I got a short video of the dolphin pod cruising our med cloud while Bruce settles back in...