I've heard people talk of Army Hole my whole sailing life.  It seems the kind of place that you know exists, but information is either old or through someone who knows someone who's been there...  Bruce and I THOUGHT we had been there last year on our way from Port Aransas to Freeport for the TMCA Rendezvous... but as it turns out, we were just anchored out in Espiritu Santo Bay thinking to ourselves "this is no big deal".

While docked at the luxurious facility at Sanctuary, I got busy with the maps, Apps and Internet searches and "found" the place.  The more information I came up with, the more I wanted to go there.  I told Bruce "this is doable".  We are so close, it would be silly to go back to our old stompin' grounds before we ventured out to this new place.

So we told our friends goodbye and departed Sanctuary on Wednesday afternoon.  Armed with my notes taken from the TMCA Destinations Wiki (an invaluable find) and waypoints marked on a couple of iPad Apps, I felt that it should take us less than 2 hours to get settled in.  Our concern was getting past the first part of the channel where it leaves the ICW.  There is a cut between the spoil islands that is subject to shoaling.  We touched bottom there last year and would rather not repeat that.

Once we got past the cut, in retrospect it was smooth sailing.  However, not knowing that, we inched along the whole way.  The dogleg to Port towards our final approach was nerve wracking.  It took us out of one marked channel through a minefield of wellheads, but the depths were better.  Once I familiarized myself with the NOAA map and found that we could totally get out of the channel and the depths would be fine, I relaxed and began to enjoy myself.  The entire way was well marked, which helps immensely.  The instructions on Active Captain and TMCA were extremely helpful. 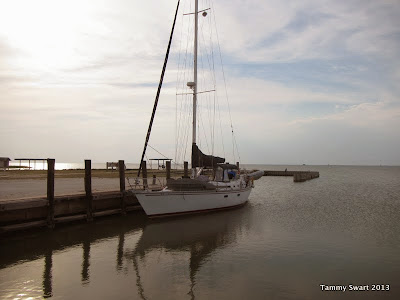 The sun was beginning her descent as we settled in at the bulkhead.  We had the place to ourselves with the exception of a tent camper and his son.  Nice guy... even came over to help us dock.


We tidied up the boat and took a little walk around as the creatures on the island began their nightly routine. 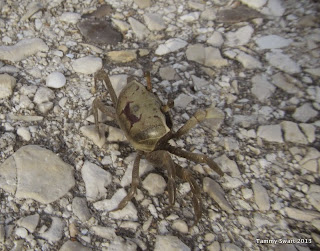 The Camper, Brent, was a veritable fount of knowledge about the area, having been here many times.  He and his son were fishing for Sheepshead using fiddler crabs as bait.


The little crabs were EVERYWHERE!  They made the strangest sound as they climbed over one another...  Totally creepy! 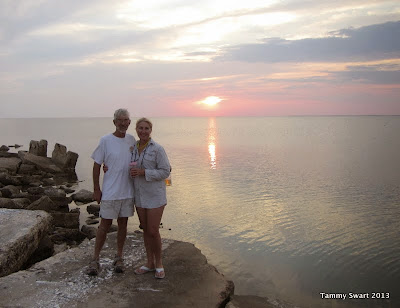 We hung out with Brent and Kyle for the sunset then went back to the boat to make dinner.  We were elated that we had arrived safely at our intended destination.  The air was cool and we were ready for bed.  The kitties were confused by the change in scenery, but there had been no barfing on the trip over.  They patrolled the deck and settled in.

I had been warned by a Facebook friend of possible marauding raccoons.  WAIT!  Raccoons!  Would come onto the boat?!!  I laid down in my bed with one eye open as I watched the open hatch... I looked for signs of tiny toes  or noses peeping in.  I relaxed finally thinking the cats would alert me to any unauthorized critters and fell asleep.  We have a big day exploring ahead of us!