The Rest of the Labor Day Weekend 2012 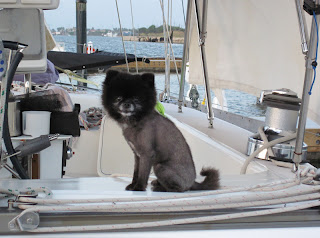 Did I mention that Leila, our Grand Dog was with us for the weekend?  Brittney was in Florida and so we just took Leila along for the ride.  I won't say that she enjoyed the sailing part, but she was enjoying the change of scenery at the dock. 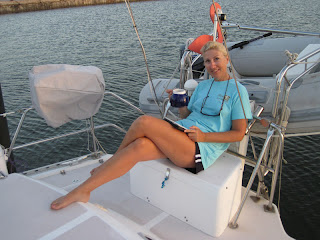 Bruce and I relaxed on the veranda and watched the sun come up as we contemplated life and made a plan for the day. 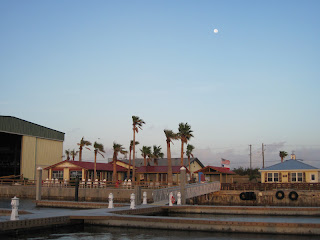 We said our goodbyes to the fine folks at Redfish Willies under a setting moon, and retraced our track to rejoin the ICS and headed East. 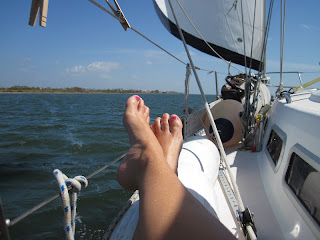 This section of the ICW is where the scene begins to look like "somewhere else" to me.  The banks have different flora... there is just a different feel to it. 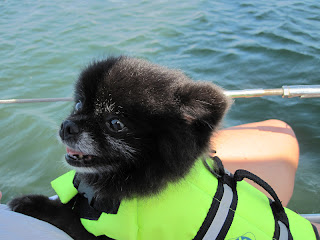 We had very nice conditions, flat water and winds just aft of the beam and we were sailing along at 6ish knots just lovin' life.  OK, well maybe Leila wasn't lovin' life... but it's an acquired taste, sailing is...

We broke free of the ICW and did a bit of sailing about in Aransas Bay, then settled ourselves in a transient slip at the Rockport Municipal Marina. 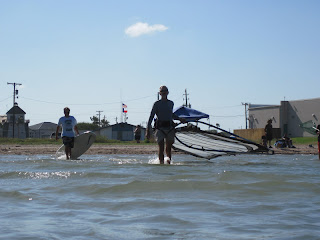 Entertainment for the afternoon was found on the little stretch of beach where we claimed a spot amongst the tourists.  Kathy and I tested the warm waters while the guys suited up for some windsurfing. 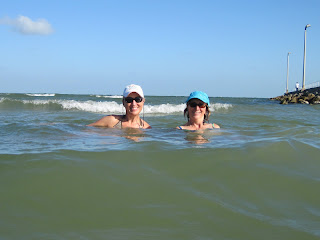 We soaked in bathwater temps and did our best to avoid critters skittering across the soft sands under our bums... 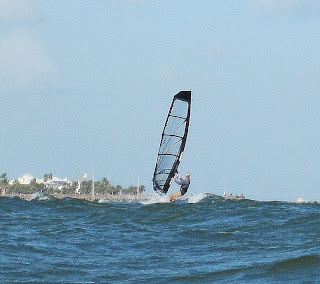 Bruce was first up on the windsurfer.  He brought his gear along this trip zipped inside a new (to him) board bag lashed to the rail.  He is testing his systems for continuing his windsurfing hobby whilst cruising. 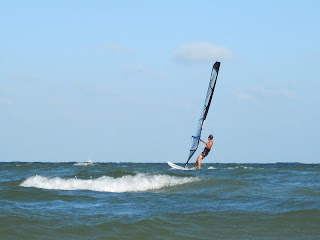 Robert was next up after Bruce made a couple of passes...  Robert, when asked how long it's been since he last went windsurfing... said it's been a couple of years.  Upon closer calculation... his last time windsurfing was when we were on Maui... in 2006!  I think he did a marvelous job for someone so "rusty"... and when he was done, he was hot to get out there again... 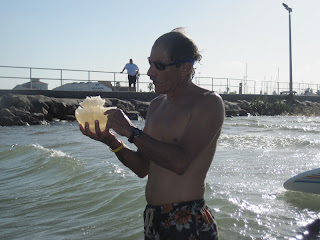 While Bruce was out there, Robert advised us that the little pauses we saw were caused by the abundant cabbage heads.  On our way back to the shore, Robert snatched one up... causing a bit of female squeamishness... 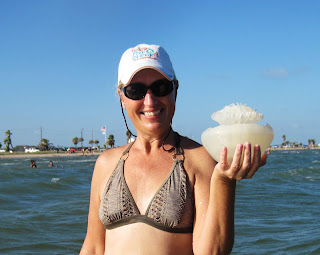 Kathy and I quickly got over it once we realized there was no danger of being zapped... See?  Easy!  It felt very strange in my hand... sort of a dry feeling really and I could feel it softly pulsing as it tried to propel its self along unsuccessfully until I let it go. 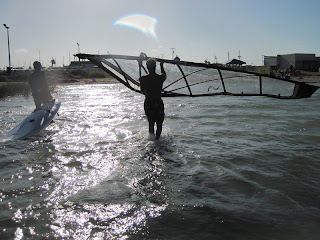 We left the beach with the sun getting low.  Kathy and I beat the guys back to the boat and began preparing dinner. 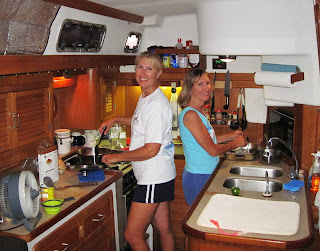 We had purchased some fresh shrimp earlier in the day and the plan was for shrimp tacos with Spanish rice a la Tammy.  Kathy and I shared my little galley nicely. 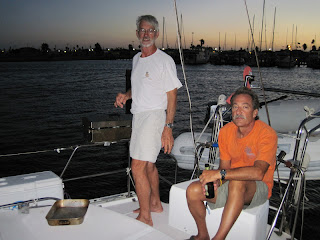 Bruce grilled the shrimp on the veranda with the setting sun in the background.  We enjoyed the cool breezes which were a relief from the scorching heat we had during the day.

Dinner was delicious and we sat for a while on the deck before tumbling into our cool dry beds, lulled by the sound of the slapping waves against the hull. 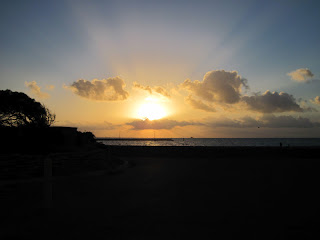 Morning found us lazily gearing up for what promised to be a windy ride back to Port A. 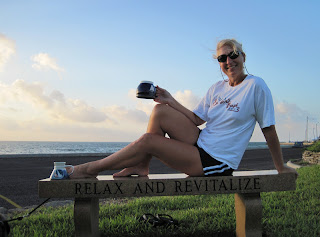 Bruce and I took Leila for a walk before our guests got up.  I found this perfect bench to match my mood... maybe I'll print this picture out and tape it to my computer at work for when I need an attitude adjustment... 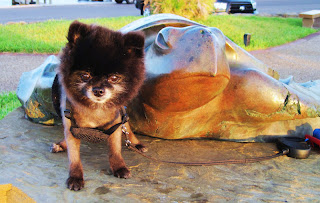 And of course, what's the fun of having a Grand Dog if I can't torture her a bit now and then.  Leila is SUCH a TOURIST! 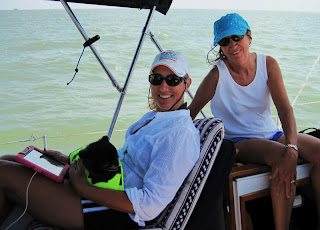 After coffee on the veranda with our guests, we set sail leaving Rockport behind.  I've been nervous about sailing about in Aransas Bay, I guess just not having much experience there, I worry about depths.  I got a bit of experience under my belt and feel much better and more relaxed about it now.  We had fine depths everywhere we went and avoided the steady stream of barges travelling to and fro in the ICW.  It was very nice not having to be in their way.  I played with the various navigation apps on the iPad while we went.  Even with winds over 20 knots our boat is such a nice steady ride, it's a pleasure to be out there. 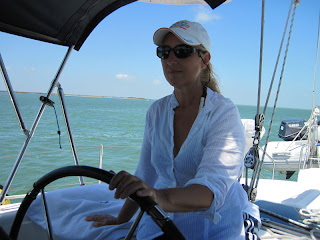 I got my turn at the helm close to the end of our trip.  The guys dropped sails as we turned into the wind and the remainder of our way was dead to weather.  We had to maneuver amongst the barges and Bruce had some trouble getting a response.  I took the radio and I guess the tugboat Captains prefer talking to a girl...  They were very nice to me when I hailed them.  More experiences for me to boost my cruising confidence...

The wind gods were kind to us as they dropped the winds to a very manageable 13 knots in the marina as I docked the boat in our slip on one pass.  I don't even think I hit the dock at all!  YAY!

We totally enjoyed having fellow boat people, Robert and Kathy along for the long weekend.  We've all been so busy with our lives lately it was nice to catch up.  Another successful cruising experience has me longing to cut the dock lines and continue the journey.  Every time, it gets more and more difficult to go back to life on land.  But for now, it was just another Labor Day Weekend of fun in the sun with friends.