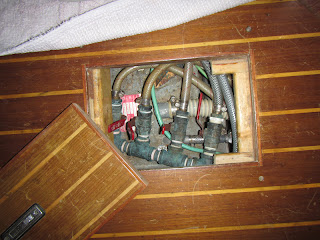 Luckily for us, the two previous owners of Dos Libras were meticulous record keepers.  They were also relatively handy or well-to-do, which means that they have provided us with some awesome spares and upgrades.  The problem is that figuring out what exactly we have NOW is not as simple as whipping out the original owner's manual and looking it up.  So many things are either very much changed or relocated.  One example of this we have found is that the sub flooring in the entire boat has been reinforced and redesigned to provide more stability and lots of storage cubbies in previously unreachable places.


This has also provided us with access panels to view what's lurking under there...  One such subject of interest for some time now, has been the water tanks.  Bruce has been trying to reconcile what we were told, with what he has read in the manuals and what is actually THERE.  This weekend we took a couple of hours and pulled up the flooring and put to rest the question of how much water we carry and where we carry it.


This might not be of much importance if we weren't planning to cruise the boat. But we are, and it's very much important to know what we have and also, to make sure that the tanks are clean.  Prior to our purchasing Dos Libras (formerly Ariel) in March of this year, the boat had been left sitting on the hard for most of the past year.  We have flushed plenty of fresh water through the tanks, making sure to rotate them all to empty so that no water sits too long.


We have had some little black flecks that look like carbon clogging the faucet diffuser screens that has us stumped.  We can't find any kind of carbon filter after removing the one under the sink just after we got the boat.  This has caused me to harbor dark thoughts about what might be "in there"... where we can't see it!  Dark thoughts have driven me to the Internet where I have scoured cruiser blogs and forums world wide and have come up with quite a lot of useful information which has combined to make an action plan for us.


Today, we put that plan into action.  Making sure that we have clean tanks and a reliable water system before we move aboard Dos Libras is one of our priorities. We've been making due with carrying bottled water aboard for cooking and drinking, but that won't be economical nor practical when we move aboard. 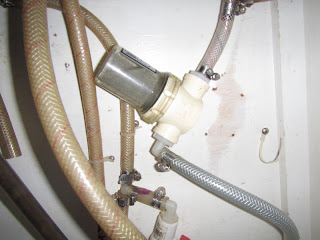 First step... install a strainer between the line leading from the tanks to the freshwater pump intake.  Bruce found one on the boat, thanks to our predecessor and made quick work of popping it right in.  This way, anything chunky that may come out of our system will be trapped in the strainer for easy removal prior to mucking up our pump.


The next part is shocking... that is, shocking our system.  Yeah I guess kind of like you would do a swimming pool.  Now this is the part that I researched for weeks.  Our previous boat had two plastic tanks which were easy to access with a large hole in the top for cleaning them out.  Dos Libras has four aluminum water tanks and four separate deck fills.  They are 19, 24, 31 and 50 gallon for a total of 124 gallons.  It is nice to finally clear up all the speculation and pin it down.

Most of the reading I had done about caring for your fresh water tanks in the cruising blogs prior to buying our boat, consisted of various different recipes for adding bleach to the tank.  Upon learning that we have aluminum tanks and all of the dire warnings against bleach being used with aluminum... I was beginning to worry... what would we DO?  I dug in and read a ton about it and have come to some conclusions of my own.


Now I'm no chemist and have no experience at all with aluminum tanks, but from what I gather, yes, chlorine does gradually corrode an aluminum tank over time.  Even the amount of chlorine found in your public water supply is slowly causing problems.  (more reason to get out there FAST)  But chlorine, used in appropriate amounts and left in for short periods of time, will fix most problems while causing minimal or no (additional) damage to your aluminum tank.  In the end, every boat owner must make his/her own decisions about the method they choose, but this is what we settled upon.

*** Updated  Practical Sailor advocates the use of 1/8 cup of plain unscented bleach/per 10 gallons of water.  Knowing the capacity of your tank is important so that you can get it right.  There must be some water in the tank when you introduce the bleach, but still be room to fill to provide agitation to distribute the bleach.  If you have aluminum tanks consider mixing the water and bleach in a bucket then pouring it into the tank.  Practical Sailor says that this will reduce the chance of spot corrosion in an aluminum tank.

Next, run water from each tank through each outlet in the boat.  Don't forget the cockpit or transom shower.  Run the water through until you smell the bleach.  Turn it off and leave the water pump on to keep the system pressurized.  Leave the bleach in the tanks and hoses for four hours to sanitize the tanks and hoses.

Drain each tank one by one.  Make sure that you remove all of the faucet diffuser screens first so that gunk won't get clogged in them.  Completely drain each tank then fill with fresh water and flush again.  When you refill them again, you can use a solution of 1 qt. vinegar for every five gallons of water, soak over night then flush and fill again.  We didn't need the vinegar flush when we did ours because we don't plan to drink it until we install a designated drinking water filter.  That will be another project for another day...  Happily I report that there wasn't any gunk in the system.  We plan to order The Purest One filter system to install under the galley sink.  It's another step closer to living aboard.