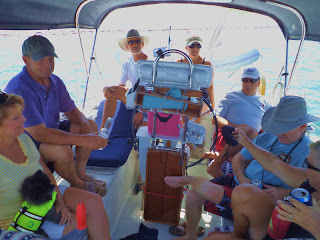 This weekend we had the perfect balance between fun and productivity.  We spent Saturday morning lying around relaxing and just enjoying not having to do anything.  This was followed by (when the gang got up) a sublime sail in the near waters of the Gulf of Mexico.

We were arguing which route to take, Lydia Ann Channel or CC Ship Channel for an afternoon sail, when someone offered up "why don't we go offshore?".  We had a couple of newbies aboard and were concerned about Mal-de-Mer but decided to chance it.  We had probably the most benign exit through the Port A Jetties as we've ever had and fell off to run the beach for an hour or so.  We turned and made it back in almost half the time but it was getting late so we headed for the slip.  This was followed by a siesta and then a pot luck dinner aboard Merlin.  Fun day!

Everyone had their own boat projects to do on Sunday.  Our focus was on finding and stopping some leaks on deck.  I replaced part of a gasket on one of our hatches but while doing that, I investigated further and found it not to be the problem.  The problem was the glass being improperly bedded.  I tested this theory and found I was correct.  I taped it up and aborted this project until after further research on the best way to re-bed the glass. 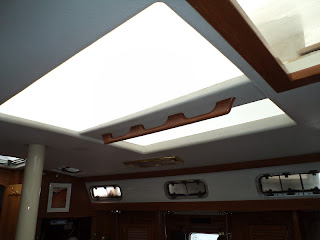 Next project on the leak-list was our overhead skylights.  These are a sneaky leak... the kind you can't readily reproduce.  It seems to take a long time for water to begin coming in. 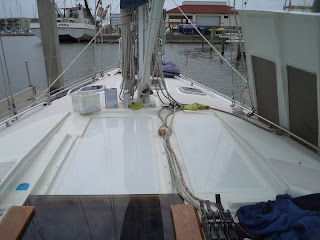 We removed the outer shell on the deck by way of a dozen or so screws.  We lifted that heavy sucker off to the side where I hosed it down to clean off some minor dirt.  I spent a couple of hours with a razor and knife and the aid of some denatured alcohol, getting the old calk scraped off.  There were some missing screws with open holes and the wooden stop for the hatch was broken but these were the only possible water entry points I could find.  (you can see the good slide stop in the center of this photo.  The opposite one would be replaced after redrilling the holes to the left of it on the deck) 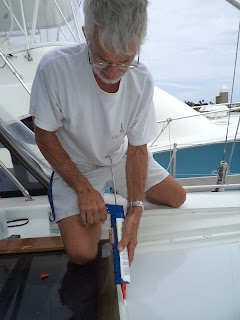 I filled the holes with LifeCalk and templated the teak stopper piece so that Bruce could redrill the holes.  Then I replaced the piece with new calk and screwed it down.  I filled the other suspect holes and Bruce laid the calk along the edges of the white skylights while I followed him with a scraper spreading it down. 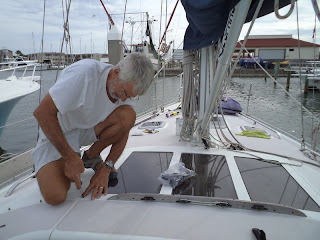 We were thankful that the sky was quite overcast throughout this entire process and working on deck was very comfortable.  Sometimes you just get lucky.  We hefted the topper back on with one minor mishalp where I nearly went over the side... but no worries.  We slid it back in place and screwed it back down.  DONE!  I love the sense of accomplishment I get when we can tick off an annoying problem with no extra side trips to the hardware store (or worse).  We headed back home to our workweek ahead.