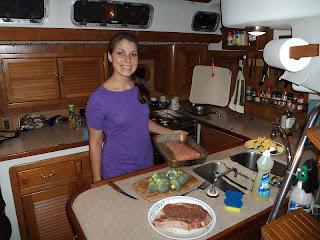 This weekend was a play weekend for us.  No boat chores, just fun. We arrived at the boat on Friday evening and Brittney and Matt came over to pick up her dog.  They stayed for dinner... in fact, Brittney brought most of what we had for dinner.  I love having kids with jobs... 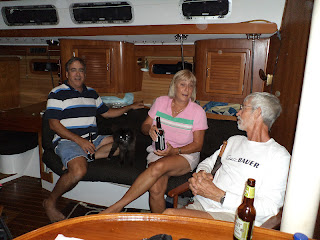 Before the kids arrived, we watched the folks from Merlin for about an hour as they tried to coax the newly galvanized anchor chain back into the locker by way of beating on the broken striker about every 3 inches.  Their weekend cruise plans were dashed...  When they stopped by for a visit after dinner...what could we do?  We invited them to sail over to Bahia with us! 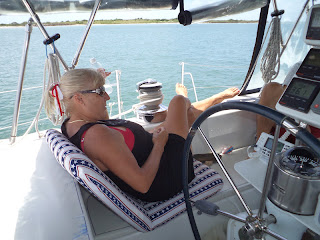 Saturday morning arrived and we found the decision made... Bill, Jan and Bravo would be our guests for the weekend.  We loaded their stuff aboard and took a last look at the weather.  It didn't look promising. 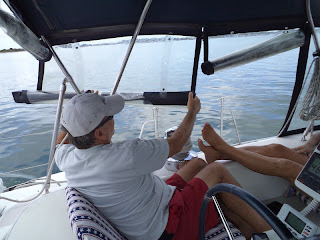 The forecast rain and thunderstorms would keep many cruisers in the slip... but we made the decision to head out anyway.  We weren't afraid to sail in the rain!  With the enclosure, it would be just fine.

We had a brief run-in with the Port A Ferries... our engine started to heat up so we turned back just as we had crossed their path. Then Bruce worked out the problem so we switched back again while Bill gave a brief explanation of our bizarre behaviour and apologized to the Ferry Captains. I guess we've made a name for ourselves with the professionals. We'll have to work on our image. 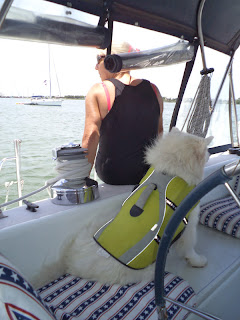 We motored the whole way as the winds were non-existent until about a mile from our turnoff, so it wasn't worth the effort of raising the sail.  Jan had worried about how the big white dog would do on a strange boat, but she did surprisingly well...  She was no trouble all weekend and was even helpful with the leftovers. 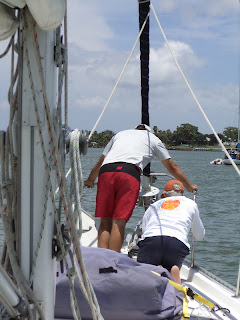 Ingleside cove was sprinkled with vessels but we found a nice spot for ourselves.  The guys got our anchor down and we were in for the duration.  We enjoyed our afternoon swimming off the transom as other boats trickled into the marina. 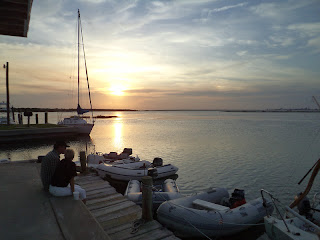 The reason (if one needs a reason) we chose Ingleside cove for this weekend's destination, was the annual Bastille Day celebration held at Bahia Marina.  Late afternoon found soggy cruisers scurrying back to their respective boats to prepare pot luck offerings just in time.

This event is always popular and this year was no different.  Many attendees arrived by "land yacht" (remember the weather forecast) and once again, the food was awesome. 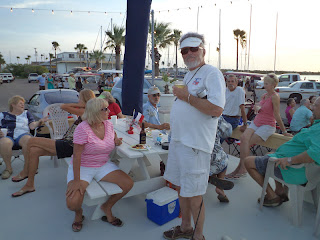 The folks from BYC were out in force and took up an entire corner of the patio.  It's always nice to see familiar faces in the crowd. 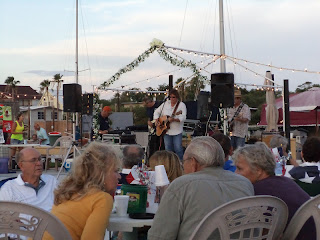 Larry Joe Taylor was extra good this evening.  We've had many opportunities to hear him in person as he seems to frequent Port A's hot spots, but I though he sounded exceptional.  Folks got out on the dance floor as day melted into night.

Finally the moment we had all been waiting for arrived.  Old friend Steve lit the Bastille and we all stood around watching it burn.  When the excitement died down.... we made our way back to Dos Libras but the evening wasn't over.  We spent pleasant times sitting on the veranda with our guests talking of world events and things (as sailors do) until we could stand it no more.

The evening was cool and the company was good.  The weekend was perfect.  We sailed back to Port A on Sunday thinking this would be one to remember and marveling at how much easier it is having "boat people" as guests.  I'm not knocking those non-boat people out there so don't get your feathers ruffled... but it's so much less stressful having people aboard who know how things are done on a boat.  Thanks Bill, Jan and Bravo for being a part of the good times.