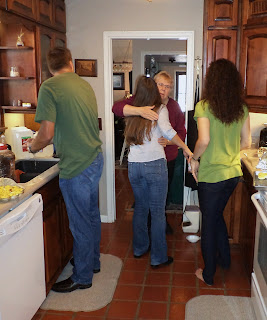 Well... long story short, I wasn't going to have Thanksgiving Dinner at my house... then I WAS!  The girls were going to spend the Holiday at their Father's house.  He has recently been diagnosed with cancer and has been undergoing chemotherapy on the heels of a grueling surgery.  With less than 2 weeks to go, Melissa began to worry that he wouldn't be up to the stress of having a lot of company over, so I volunteered to host!  I called my Mother and Carla, Mark and Laura... 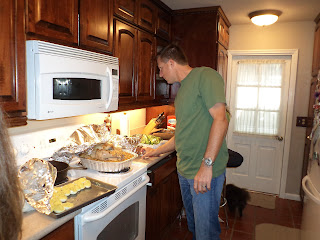 I was bound and determined that it would be a "no stress" event for everyone.  I had a simple menu of the old favorite dishes.  We had the potential for over 20 people attending with the kid's Dad and his family, both of my girl's boyfriends and their respective parents.  I was sure to need a ham and a turkey. 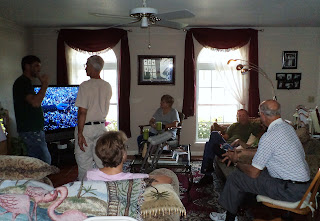 When the day arrived, the plan had undergone several changes with the end result being that my Ex Husband was feeling well enough to entertain, his mother was able to cook for him, so my gathering became the first of two for the kids.  This meant we would be eating earlier in the day than planned, but no sweat.  We had purchased the bird after the final plan change so it wasn't enormous!  We popped it into the oven after 8 am and had most of the morning to put the last touches on things.  People arrived and we had time to relax. 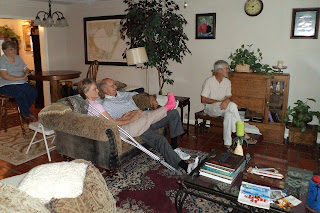 Matt's parents didn't make it down this year.  His sister isn't well enough to travel so they stayed with her in San Antonio.  Michael's parents did come down though and Michael had neglected to mention that his mother has her foot in a cast from a hiking accident during a recent vacation.  The poor thing hobbled around and I could tell she was tired of it.  I had never met Pat before today.  We met Sam last Thanksgiving on a visit to Melissa's house.  It was nice to get to finally meet her.  I had been very curious how it would be.  You see... her maiden name is also McNamara!  Understandably there were thoughts running through my mind that we would meet and I would see something "familiar" in her.  But... other than a very sweet woman with a great sense of humor... no other resemblance. 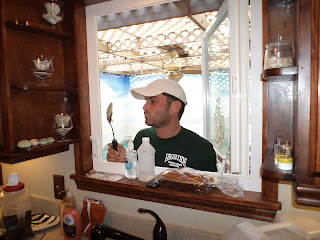 Those with no kitchen duties watched some ballgame on TV while those of us in charge began pulling it all together.  The scent of ham glaze and the promise of a heavily laden cheesy potato spoon drew hungry hopefuls...  I guess it was too hot in the kitchen for Matt! The guy knows how to stay out of the way of the cooks. 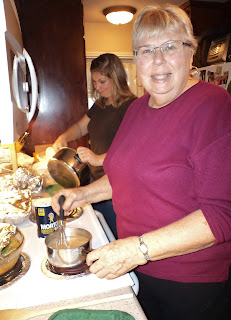 The turkey was a bit of a mystery.  My meat thermometer never did rise to the "done" level.  We kept putting it back in to cook but finally decided that the thermometer was on the fritz.  The legs were practically falling off.  Please don't let this bird be dried out!  Melissa was in charge of mashed potatoes and Mother made the gravy with her secret family recipe... (McCormick) while Brittney and I made room for everything on the serving table. 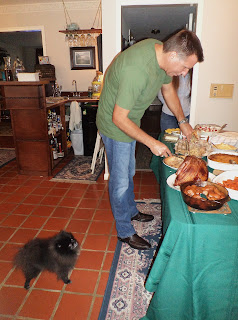 My brother has assumed the honor of carving the bird in our family.  He does a great job and nobody else wants to do it so every year we flatter him into doing it again.  This year he had an ardent admirer in Leila.  She just KNEW that if she was on her best behaviour, someone would take pity on her and pass her a scrap. 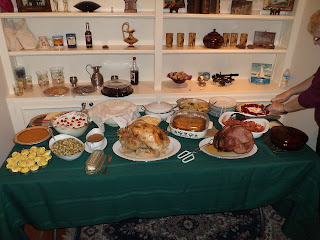 Ta Daaaa!  Finally, it's all done!  Everyone brought something to share and we ended up with so much MORE than enough.  It all looks so good and we're so hungry! 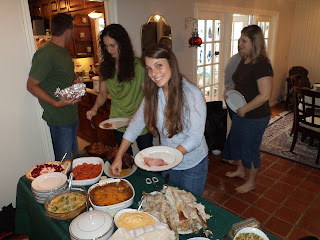 We all lined up and filled our plates!  I don't have a table large enough to seat everyone together so we had people in the dining room and on the patio.  Kind of a reverse "kid table" phenomenon occurred.  The kids have taken over the world.  The parents are relegated to the kid table.
In all the frenzy, we never got around to taking any group pictures as I had hoped we would.  But we had a lot of laughs and fun with one another.  It was nice to be done with the cooking and have time to visit for a while.  The kids took their boyfriends off with them to their Dad's house for round two, leaving the old people to talk about them behind their backs.  Don't flatter yourselves kids, we had lots of other stuff to talk about besides you!

Our family is very informal and we don't have the praying and hand holding that many families do around the table on Thanksgiving.  But that doesn't mean that I don't take the time to reflect about all of the things I'm thankful for.  I have a very good life.  I have a husband who adores me far more than I deserve; I have two beautiful, confident, intelligent daughters that seem to think I'm OK most of the time; both of my daughters have found guys who idolize them as much as my own husband does me; I want for nothing monetarily and I know how to be happy.  Now if only I could somehow arrange for world peace, everything would be groovy.  But... for now, I'm thankful for all that I and my family have.
﻿