Every Good Adventure Starts With A Plan...

Wow it's been a long time since I've had time to sit down and blog.  I've made it through the roughest part of launching electronic health records (EHR) at my office and I finally hear the return of laughter in my Business Office.  We see the light.

The year since our "Go Live" has been nearly as rough as the system build but we're getting better.

Back when my dear departed friend Mimi was still working with us, Bruce and I had planned to get "out there" and had even begun the process to the extent of selling our home and purchasing a townhouse.  The plan was to rent it out and leave.  However, the townhouse was a "fixer-upper" and it ate up our cruising kitty pretty fast while providing us with distraction from our plans.

Now, 7 years later... we have paid off the townhouse, the EHR project has life, my Mimi is gone and my kids are confident, competent, self sufficient individuals who no longer require my physicial presence in their daily lives.

I have a feeling that time is short and that it is time to revive the cruising plans.  I read that if you don't have a date, you don't have plans... well, we have a date - or at least a season in mind.  We have made definitive moves towards throwing off the docklines and are on our way.

The rhumors are out there.  The other day while walking to my car from the office, a woman from my building told me that she heard I was leaving.  I had no idea the news had spread and I told her that it would be a while.  But since then, we have made strides towards the date.

The Plan:  Sell Elan, buy a bigger boat, transition from townhouse to live-aboard, pack away my "treasures", give the girls first dibbs on the rest of the "stuff", have an estate sale, rent out the townhouse, finish out the time at work until my youngest gets her degree (thus the Spring 2013 target date) then set out for Florida, up the East Coast where we will join the other Cruisers in making our way South.

Now the first rule in Cruising is that there is no rule... the second is that plans are made to change, more like guidelines or a general inclination.  Anyone who knows me, knows that I set my plans with certain well thought out goals and targeted deadlines in mind, then I tend to make a mad rush to the finish line like I'm stuck on fast forward...  Well, I'm really trying not to do that, but the only thing keeping me from it is the fact that we must sell our boat if we don't want a big loan payment on our shoulders.  So in the meantime, we are plugging away at the baby steps while playing the Texas Lotter twice weekly.

Every day however, I am reminded how precious my time with my husband Bruce is, and I renew my efforts and my resolve to get things going so that we can live our dream all the sooner.

The Reality:  What have we done to prepare?  Well, we have lists.  The "Biggie" is to sell Elan. 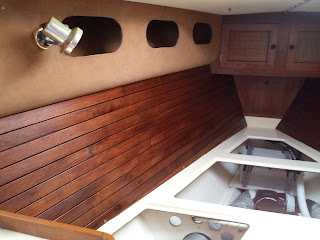 Well, I took a week's vacation and Bruce and I spent it cleaning the boat.  I went from bow to stern inside with cleaners, rags and scrubbers and brought it to better-than-when-we-bought-her condition. We made discoveries of things that needed repair, replacement or just attention and either have addressed them or they are in process.  We cleaned the hull outside and recoated it with a shiny new finish which looks great!  During that process we made the call to remove the boat's name.  Elan is no more.  She is officially a no-name boat.  (there was a bit of sadness in that, but we're on a mission!) 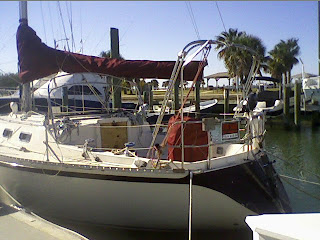 We just took delivery of a new mainsail cover and binnacle cover yesterday and they are very nice.  We still have a list of things to do which we will take care of as time allows, but we have "For Sale" signs on the boat as we speak.  We won't get too excited about selling until the new year but will probably do the "For-Sale-By-Owner" thing until then once we finish sprucing up the exterior and get some pictures.

We have taken some money out of the 403B in preparation for having a down payment for our new boat and I have been pouring over the online brokerage sites.  We took a weekend trip to Kemah a few weeks ago to look at some boats we had our eye on.  Good thing we did this as it brought "clarity" to some ideas we (I) had.  We discovered that a 38 ft boat was probably not going to suit me. We looked at several of the boats I had found pleasing and one of the forerunners was shot down entirely... my personal favorite will never suit Bruce, so it's off the list (at least that's what I say out loud).  After all of the searching, we have narrowed it down to a few that we would love to have but probably can't afford (playing the lottery...) but there is one that we would really love to have and both of us are, at least mostly, satisfied.  So... we'll watch those online and bide our time while checking off things on the list and compiling a "boat fund". 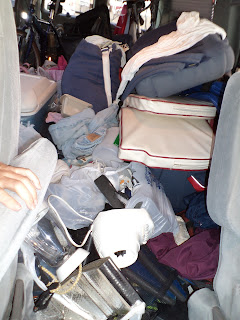 Hopefully I won't die of impatience before we get there.  I guess I can put a few pictures of my handiwork after the cleaning frenzy since there isn't any photographic proof of the process other than the one of the pile of stuff we took off the boat... 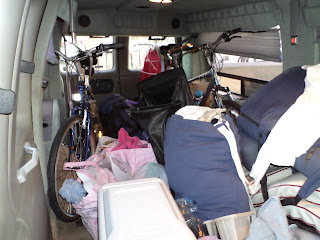 The poor van was loaded down and we raised the waterline on the boat about 2 inches.  If only Bruce had known this was possible back when we were racing!  And he was so diligent in removing my silverware and emptying the water tanks prior to each big race... 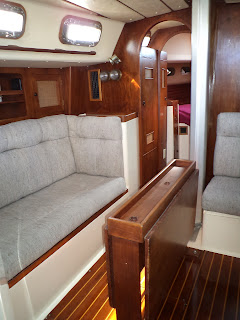 The interior is nice and neat... 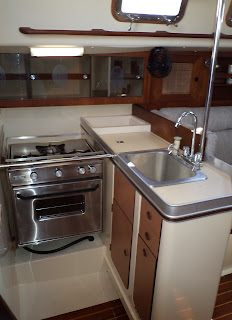 and the galley shines!  Now if only we can get through the winter hanging out with our BYC friends who have moved their boats to Port A, without messing things up again!  Stay tuned for more on our Journey to Cruising... This is only the beginning!