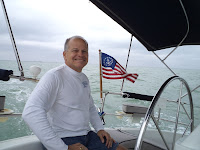 Bruce and I have our boat all cleaned up to show and Walt and Judy needed some swabbies to help them get Endless Summer out to Flato Cut for the last BYC Cruise of 2011, so it was a ready made match!  We signed on as crew on Saturday morning with a forecast for extreme winds, but we'd been plagued with issues all year for our scheduled cruises and we weren't letting this one slip away.  Two boats opted out but the turnout was great!  We set sail in winds blowing in the mid 20 kts.  We had a bit of indecision about what sail configuration we would fly, but finally settled in with main only and motorsailed the whole way.  The ride was solid and we had a great time between snacking and dolphin shows... it took us about 2 1/2 hours. 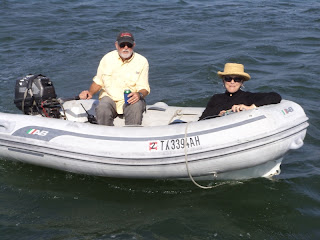 We picked our way in through the Flato Cut channel at a snail's pace.  No need to go aground with this winged bulb keel on the first time out...  We used the boat's GPS chartplotter and my iPad to navigate ourselves safely into the Cut and were met by the Welcoming Committee... Johnny and Cynthia.  They have been here many times and were our unofficial Dinghy Drift organizers for the Cruise.  Click here to see Johnny's Video Photo Album of the Dinghy Drift. 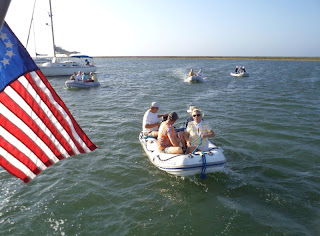 We got the boat positioned and the hook down... all of these things "firsts" for Walt and Judy's maiden voyage cruise.  We relaxed for a while and enjoyed the relative peace of the anchorage with winds still gusting into the upper 30's.  ﻿We were the "Host Boat" for the cruise so Judy and I opted to stay behind when the Dinghy Drift got going so that I could help her prepare the snacks for the hungry hordes that would soon be converging on Endless Summer.  It's difficult to be of much help in the confines of a sailboat galley so Judy ended up doing the majority of it but I was there lending as much moral support as I could.  With these winds, it wasn't too long before the Dinghy Drifters had all of that kind of fun they could stand, and the wet laughing BYCers headed our way. 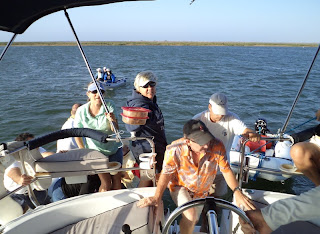 We were boarded as if under seige by more than 20 sailors piling on practically on top of one another to get aboard. 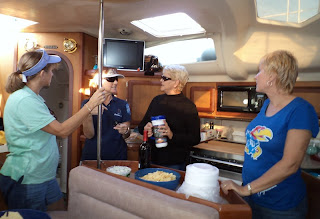 Judy had the spread of snacks set out down below where some early-birds reached the prize... 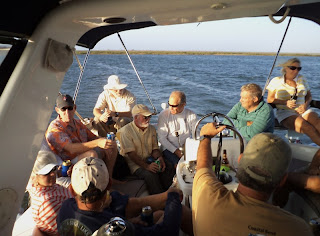 The cockpit soon filled to bursting with BYCers and the chatter was on!  I made my way up from the galley after tasting some of the goodies, so that I could allow room for another to take my place in the coveted spot at the table.  Now how am I going to get out there? 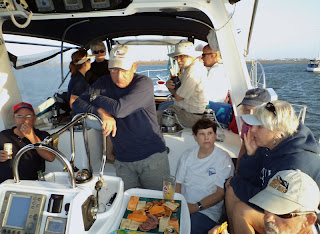 I climbed over heads and backs and finally made my way to the princess seat on the stern, where I sat and stared as the buzzing talk going around and 'round made me dizzy.  There were no less than 4 different conversations underway simultaneously at any given time... which one would I join?
I pretty much sampled each one that sounded interesting to me with plenty of times where I just wandered off with my own thoughts and enjoyed the beauty of the setting sun in this (formerly) peaceful anchorage. 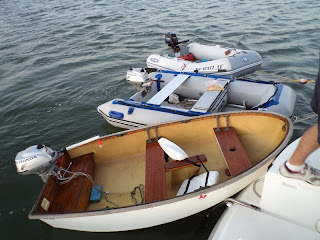 I would say that that we had 12 or more boats attend this gathering, a good turnout by any standards and a great turnout considering the winds.  Those who didn't make it out missed a fun time and a calm cool night. Most of the people left us just at or after dark to get back to their own boats for the night.  We had Mark and Brenda, Bill and Jan, and new member, Kevin stay until late (almost 9 pm) during which time what happens on Endless Summer stays on Endless Summer... We spent a restful night in their guest cabin and awoke at 6 am to enjoy the sunrise in the cockpit while Walt and Judy got those last few Beauty Winks.  Boats left the anchorage one by one... until it was just us, Merlin and SeaFlight.  Bill and Jan came to say goodbye as they and SeaFlight were headed back to Port A.  We raised anchor and set sail under jib alone for a rockin' and rollin' sail across the Bay with the BIGGEST dolphin I've ever seen following us for a while.  Thanks to Walt and Judy for inviting us aboard for a great weekend to end our Endless Summer.  This Blog Entry is being brought to you by the makers of "LifeBouy Soap".