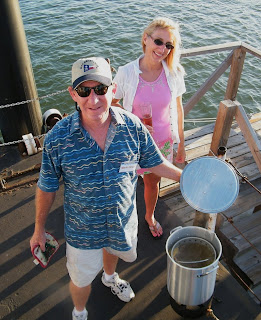 This is our second year to do the Shrimp Boil with the Hilers... Actually, it was more like they did the work and I watched! Brenda and I did the shopping early in the day and then hung out at the Club until time to prepare the 2 lbs of onion, 1 lb of lemon, 20 lbs of sausage, 14 lbs of new potatoes, 9 bags of seasoning and 25 lbs of shrimp for boiling. 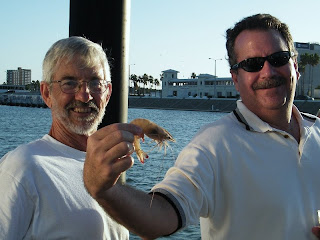 Bruce and I drove to Port Aransas to visit the Polly Anna for shrimp. These babies were swimming in the Gulf last night! 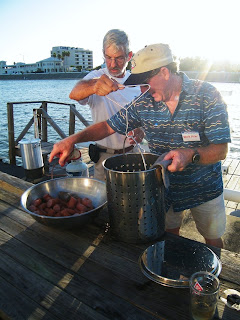 Mark got the three boiling pots going earlier this year than last. It takes a long time to get that water going. First he did the onions, potatoes and corn, followed by the sausage. There was so much food, that even with 3 pots, it had to be done in stages to get it all cooked just right. 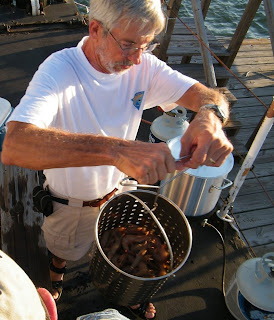 The last to go into the pot were the spice bags and the shrimp. It took the better part of an hour to get everything boiled and we were ready to ring the dinner bell at just after 7pm. 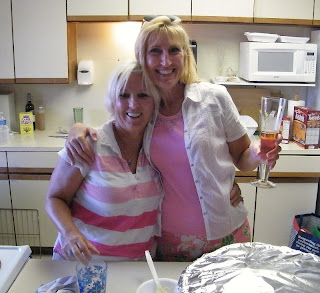 Brenda and I had the easy job of keeping everything warm in foil in the kitchen while our men sweated over the cauldrons on the sunny side porch. 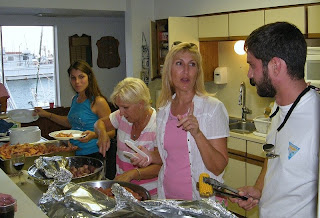 We lined up our servers with some final instructions and rang the bell. We had around 50 RSVPs and ended up feeding just about that many people. 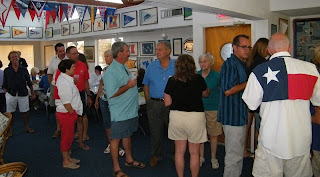 It's not so hard to cook for a crowd when you know how many to expect and BYC has really responded to the request for RSVPs this year. 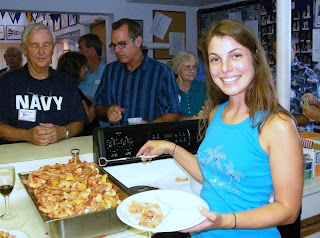 We bought 30 lbs of shrimp last year and had a BUNCH leftover. This year we hit it just right. We had 25 lbs and about 10 fewer to feed, but ended up with about 25 shrimps uneaten after everyone came back for seconds and some even for thirds. 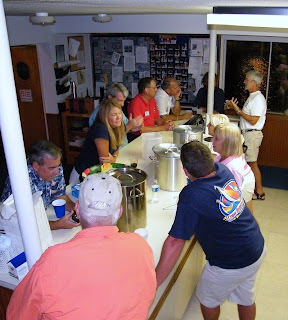 Everyone was very complementary and we were happy that it was done! We can relax for another year... After the cleanup, like in many homes... the folks gathered in the kitchen to chit chat.

We moved it out onto the front porch upstairs where we could recline in the Adirondack chairs and enjoy the cool (almost) fall breezes off of the Bay. We've had such a good time with these people over the last year. It looks like the next year is going to be even better. There are some great ideas floating around about fun things to do to shake things up a bit. 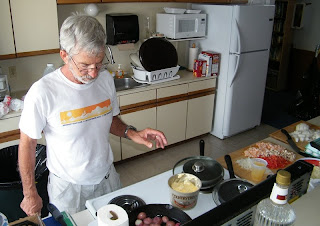 We said our goodbyes at around 11 pm and Brenda suggested we meet back at the Club in the morning to make a breakfast out of the leftovers. Bruce volunteered to make his Cheesy Potatoes. 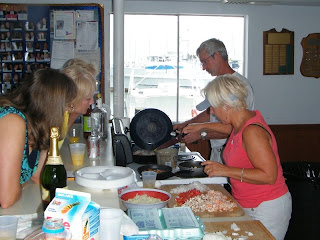 We had 15 or so come back to try Brenda's new specialty... Cazuela (Casserole in Spanish) with the shrimp bits. 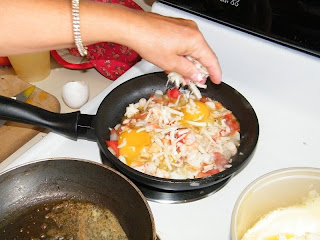 She threw in some onion, mushroom and tomato... sauteed them up, then cracked a couple of eggs and pierced the yolks, then covered them all with white Mexican cheese and sizzled it all together in the skillet. 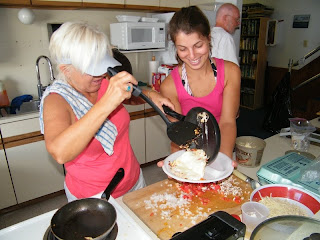 Brittney was paying close attention and swears she has it down. This is a recipe that Brenda found at a small place on Isla Mujeres this summer. We will definitely be having it again!

We ended our weekend with a relaxing sail with the Watsons. We spent about 3 hours zig-zagging out in the bay before going back to the slip. Bruce and I spent some pleasant alone time back up on the BYC deck in the breeze as we watched sailboats come and go until dark. It was nice to have time to just do nothing for a change.