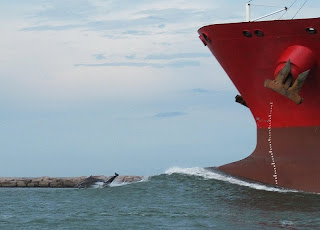 I left work at 3pm, changed clothes and rode with Bruce to Port A to jump aboard Adagio just as it began to rain. There were several sailboats hanging around waiting for time to head out through the jetties to the start line for this year's annual Port Mansfield Race. We got a dolphin fanfare as we motored out. 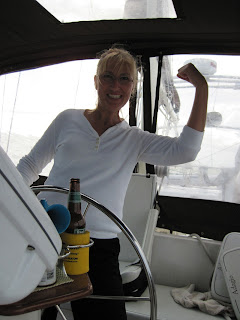 I muscled the helm to guide the 46 ft Irwin ketch out through the ever present craziness at the mouth of the Port A jetties so that the guys could raise the sails. 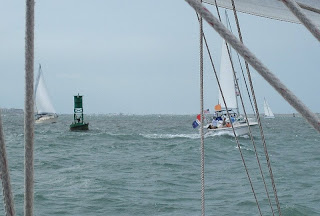 The weather forecast was for scattered showers but the radar didn't look too bad and at least there would be wind to move this big boat. We joined the others at the tiny start line briefly before the 6pm horn announced that we were off! No complicated start sequence for this one... 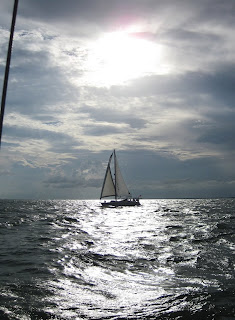 Dean (the skipper) told me that he had been asked by the owner of Caribbean Soul, a Catalina that will soon be featured in Lats & Atts Magazine, to take some pics to go with the article. I was up for the challenge and spent much of the time before dark snapping what shots I could get. 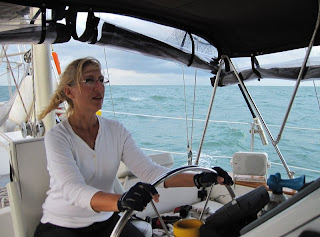 We had an informal sandwich supper and I took the helm back to sail for a couple of hours. It was surprisingly easy to keep this boat on course. Dean and Aleta have very nice chart plotter equipment with a nice big screen. I always enjoy playing this kind of real world "video game". I just watch the screen and keep the boat on the course heading. There really aren't any visual aids out in the Gulf between home and Port Mansfield to speak of.

When darkness fell, we began our Watch rotation with Bruce and I taking the first watch since I was already on the wheel. While Dean was down below trying to get a nap, we began to hear a hail of Adagio by name on the VHF radio. They wanted us to switch channels but we couldn't figure out how to work the thing. Bruce had to tell the Captain of the Research Vessel that we didn't know how to change the channel so he went ahead and made it brief on 16. He had "gear" in the water up ahead and we would be forced to alter course to avoid hitting it.

We were unsure of exactly where the "gear" was and we were preparing to turn without the aid of a wind indicator (dark), when an alarm of some sort began an insistent beeping. The AIS alarm on the chart plotter kept going off but this was different. I went down below to track the alarm and woke our skipper to help us figure out where we were and how to avoid drama.

It was just about time for a watch change so Bruce and I went below once we had figured out where we were supposed to be. We slept for a while and all too soon it was time for us to go up again.

We had lots of radio chatter between shrimpers, the research vessel, and the other race competitors. This made us very uneasy as we were not really sure if we were the object of the hails or if it was the other sailboats that were in the wrong place at the wrong time. We could see one shrimper that would soon join us in a crossing situation, so Bruce turned the boat Northwest to avoid unpleasantness. This means we were going back the way we had come with no idea how far we would have to backtrack to be out of danger. Somewhere in the midst of this, we lost power to our navigation instruments and we had no compass light or anything else to guide us.

This brought Dean and Aleta back up from their slumber again to help us out. I was feeling very badly by this point that Bruce and I couldn't seem to get through a watch without being forced to summon our Skipper back up on deck. Lesson learned here: always familiarize yourselves with the instruments when going offshore overnight on an unfamiliar vessel.

Throughout all of this, we had unsettled following seas which made it necessary to wrangle the boat constantly. We had intermittent showers which began by freshening winds up to 30+ kts which were made even more pleasant by rain showers, which seemed to take the punch out of the winds resulting in their dropping down to below 15 kts. Sails flapped in the wave troughs and we went from 3.9 knots speed to a high of near 10 kts over ground. Never a dull moment... 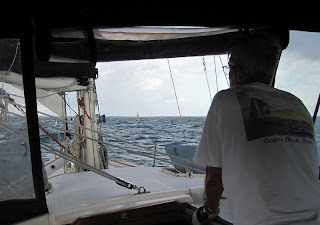 Somehow, the sky was suddenly beginning to lighten in the east and it was dawn. We had survived the night and we were nearing the Port Mansfield jetties. We could now see some of the other sailing vessels on the horizon as we all converged on the entrance and the end of the race. 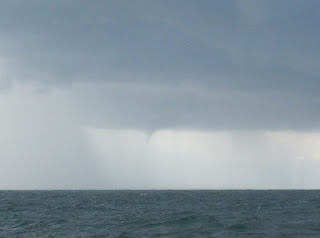 We had such a feeling of well being. It's difficult to describe to those who have not experienced. The whole night was something to be endured but now that we could see and things were good... all of the night drama was forgotten and we were just happy! Dean did have a moment of minor panic when I dove for the camera to get a shot of this little waterspout that was beginning to form off to our Port side. It never did make it down to the surface but it was fun to watch. Suddenly a thought... were there waterspouts in the night that came near and we just didn't see them?!! 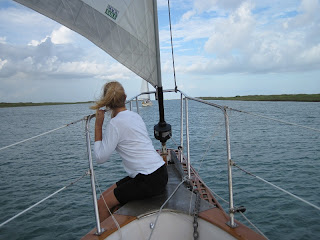 We crossed the "finish line"? Well, where the finish line was supposed to be anyway. The floating marker that we were looking for was no longer there... so we all called a time to the race committee at the channel marker that was still in position. 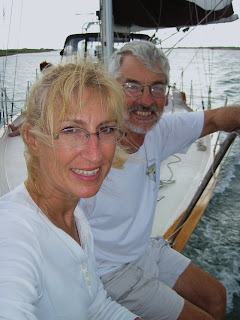 We made the delightful sail in flat water through the Port Mansfield cut. This was our first time in since it was dredged back out enough to allow a sailboat through. Bruce and I went to the bow and sat out on the bowsprit to enjoy the scenery. 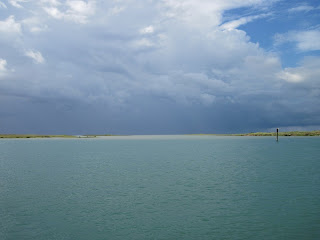 The water is beautiful here. I just don't understand why this is. 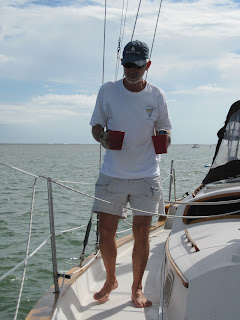 Bruce brought me some coffee with Baileys... my favorite time of day! All is right with the world. We made our way across the ICW and into the "Port Mansfield Harbor" if you will... We found our slip and got settled in. It was late morning and we had nothing to do until the evening. I went below for a shower and a nice long nap. We all lounged around until it was time to prepare for our short walk to the "Windjammer" restaurant where the awards presentation and race party were held. 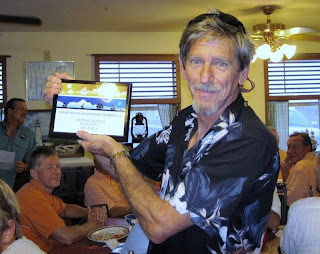 We bought raffle tickets and both Aleta and I won Larry Joe Taylor tshirts with CDs. Lucky us! We had a pretty nice dinner of fish, shrimp, rice and veggies along with cocktails for dinner. We had some good times comparing race stories with the other competitors. We found out that we had been the lucky ones... One boat lost their mainsail due to a snapped halyard, another two boats had ripped jibs. There were lots of little issues but we had come out relatively unscathed. We also came out of it with a Third Place Win! Way to go Adagio! 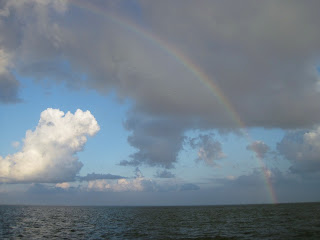 We left the party to go back to the boat for a very pleasant night all cozy in our cocoon. I love big boats with AC... Bruce and I felt more like honored guests than crew... In the morning, we left by 7 am so that we could make it to the causeway over the ICW and into CC Bay before dark. 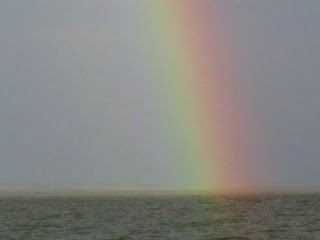 We set out for a motor sail down the ICW in great spirits. We had a fabulous rainbow and flat water. That pot of gold must be TINY if I can't see it from this close!!! 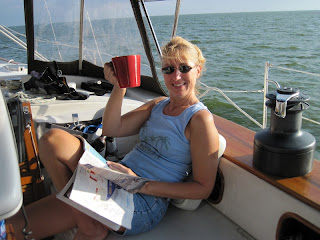 We enjoyed our coffee and good company. 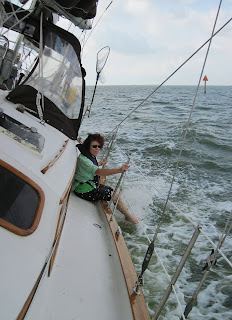 We went up on deck and enjoyed the brisk breeze as we waited for it to clock around enough to fill the sails. Aleta went to the low side rail for a "spa treatment". The water pummelled her legs so hard I thought she would be swept overboard. Evidently this is one of her favorite things to do. She ended up drenched! 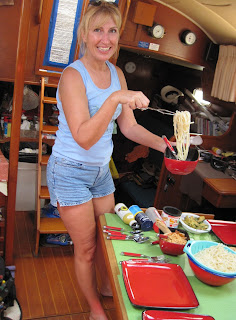 Later in the day... after I had a nice nap... Aleta prepared a late lunch fit for Kings! She went below and slaved over a hot stove to make spaghetti with salad and served it on real dishes. The boat was heeled over just a bit too much for this to work out. At one point, the pasta was pitched over and this ended our attempts at normalcy. 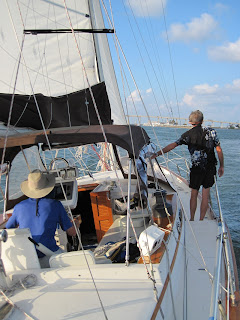 Well before dark, we made our approach to the causeway bridge. Bruce was on the helm while Dean watched with trepidation as we neared the crossing. He said with shaky confidence... we should clear with about 10 ft leeway... 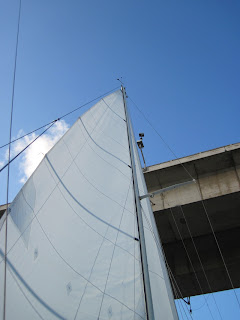 It never looks like you have as much clearance as you think you have when you're passing underneath a bridge looking up at the top of the mast. It always looks like you made it by the skin of your teeth! No sweat when it's not YOUR boat! 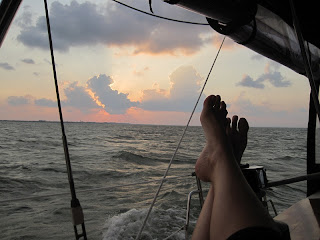 By sunset we were entering our home waters of Corpus Christi Bay. We enjoyed the view and mentally adjusted to being HOME. 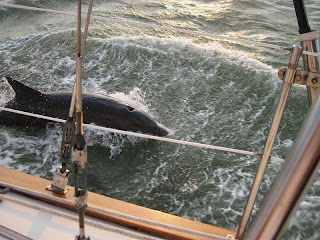 We were greeted by the CC Chop (as usual) and escorted in by this little guy. I took the helm in self defense. I'm always the control freak when it comes to the downwind sail in our Bay. I would rather be in control of the helm than at the mercy of others as the boat lurches in the waves. 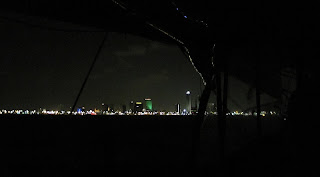 It was a raucous romp across the bay which I thoroughly enjoyed. I got a workout as I manhandled the helm in the gusts and wave troughs. We were greeted by the familiar site of our beloved skyline. We made it to Adagio's slip in time to dock and make our way to Harrison's Landing for dinner by 10pm. We enjoyed an informal sandwich on dry land (sort of), said our goodbyes and retired to our own boat for the night.
Thank you to our Host and Hostess for a memorable and exciting Labor Day Weekend 2010!